Sandy: Hurricanes Are Not All About Winds 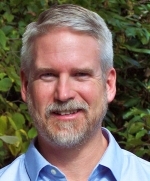 Not Your Typical Hurricane

The wind pattern of Sandy was not typical of regular hurricanes; there are several features that were caused by the hybrid nature of the storm. From the time Sandy moved through the Bahamas, it was tapping into energy from a nearby upper low and frontal system over the inland US. Thus, much of the energy that caused Sandy to grow into such a wide storm was from the mechanisms that fuel winter storms, not the convection that fuels hurricanes. Near the center, Sandy did maintain strong convection and an intermittent eye, in part because the inner core spent quite a bit of time over the Gulf Stream with its very warm waters.

Since Sandy was more of a hybrid between a mid-latitude storm and hurricane, it developed a broad wind field that was less concentrated near the center. Tropical storm force winds extended nearly 500 miles from the center during October 29th. A purely tropical system with the same central pressure would have a much more concentrated wind field, with tropical storm force winds extending perhaps 200 miles from the center, but then hurricane force winds in the Category 2-4 range within 60-100 miles of the center. 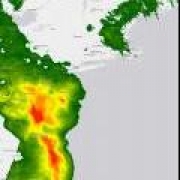 As Sandy moved northward, though the center remained over warm water, the rest of the storm ingested cool to cold air (thus leading to the heavy snows over WV). Temperatures were in the 50s and low 60s over New England, NY, and NJ during the height of the storm. With cool temperatures at the surface, the atmosphere became stratified, which prevented much stronger winds aloft from reaching the ground. Airports in the northeast warned pilots of a sharp change in winds with height during landing, with 100 mph sustained winds about 2000 feet above the ground, but 40-50 mph sustained winds at the surface. In heavier rainbands, some of those stronger winds from aloft could be transported downward, thus leading to the very strong gusts above 75mph observed at many locations. 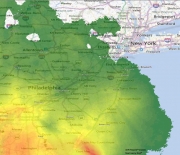 Also included in AER’s post-storm package are storm total rainfalls for Sandy from 06Z October 24 – 06Z October 31, 2012. Rainfall with Sandy was heavier to the west of the storm where its circulation interacted with a slow-moving cold front; this led to ascent of the humid tropical air from over the Atlantic, where ocean temperatures were in the 70s to low 80s not far offshore of most of the area from Long Island southward. Meanwhile, cold temperatures inland allowed heavy snows in excess of 2 feet over WV, western MD, and western VA.

The heaviest rainfalls for Sandy occurred in a zone from the NC Outer Banks to Tidewater VA, the Delmarva, into southern NJ and PA, where storm total rainfalls of 8-12” were observed. Rainfalls in Sandy were fairly light over New England, Long Island and the rest of New York, with totals generally 1-4”. Note that rainfalls under 1.6” are not shown in the attached graphics. Enhanced rainfall totals of 4-6” were also noted along the Great Lakes in Ohio and far western New York.

At AER, we are continuing to evaluate the storm winds from Sandy.