As of October, 2013, the RespondTM service for tornadoes is provided by Verisk Climate, AER's sister company. The Moore tornado swath analysis descibed on this page was provided in June, 2013, by AER scientists who are now part of Verisk Climate.

What happens when a tornado hits? AER and Verisk Analytics sister companies Xactware and AIR Worldwide each documented the tornado from important perspectives. AER provided an analysis of the storm track in near-real-time for cat response teams; AIR Worldwide was on site to document the damage on the ground and collect data that can help enhance future storm models; Xactware captured high-definition aerial photos and provided software and services to help claims professionals manage and document storm damage.

The Respond™ service for tornadoes provides insurance carriers with high resolution analysis of tornado damage location. Insurance carriers can analyze the tornado swath data with PIF to assess impact to book from a damaging tornado.

Two types of tornado analysis are provided in the Respond service: the near-real-time assessment of likely tornado locations and the detailed analysis of the damage path based on satellite imagery analysis.

Our near-real-time tornado probability analysis represents the full landscape of where tornadoes were possible and gives a confidence level of where tornadoes occurred. The service indicates where the tornadoes might have occurred very quickly after the storm. 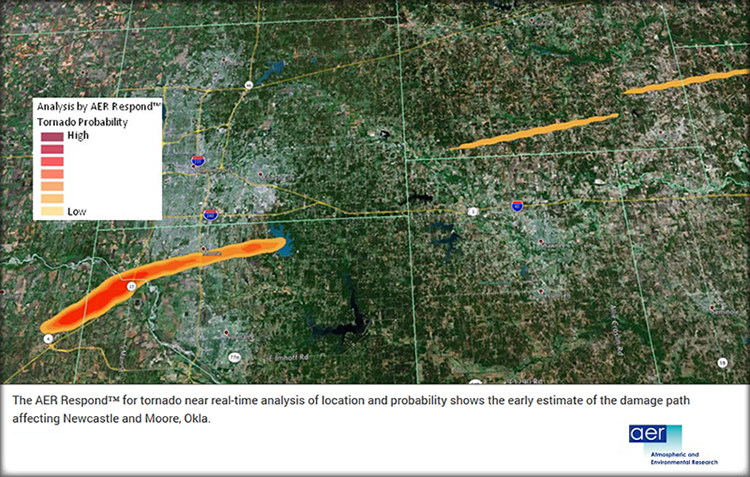 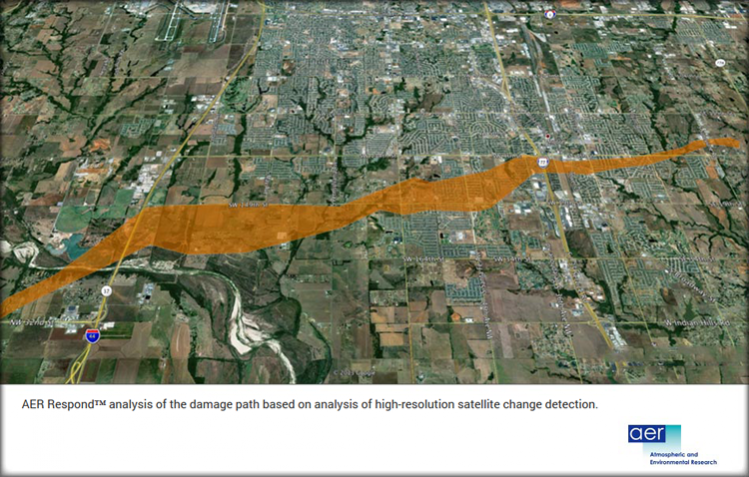 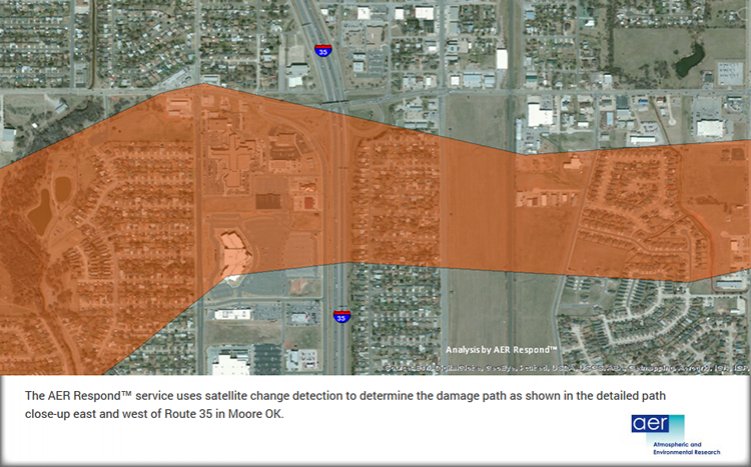 The following images demonstrate analysis of property damage by Xactware and AIR Worldwide. In the 4th image, click on the blue dots to view damage photos taken by AIR Worldwide.

Oklahoma Tornado: Before and After

What happens when a tornado hits? Ultra-high-resolution imagery collected for Xactware from storm-battered Moore, Okla., provides an unprecedented level of detail about the damage inflicted by the May 20 tornado. Xactware documented the Oklahoma City area only month’s before for its Property InSight nationwide library of high-resolution aerial images. After the storm, Xactware was in the air again, and captured these images just days after the event.

To see the before and after images, drag the scroll bar across the photo above or, on a mobile device, tap the image.