The Bottom-Line Up Front

Atmospheric and Environmental Research is applying our world-class seasonal forecasting to give the agricultural community information to make better-informed decisions with actionable yield projections for the upcoming season. Based on the season-to-date and our current seasonal forecast model, we are currently projecting the 2020 national corn yield to be 189.6 bushels per acre (bpa) with a total production of 15.98 billion bushels (Figure 1, below).  This is an increase of 2.1 billion bushels compared to 2019.

Record corn yield and production at the national level is a near lock this year. While this season is unlikely to set records against trend, there is a chance of yields finishing over 190 bpa, which would translate into corn production over 16 billion bushels. This season hasn’t been perfect (if there is such a thing) but there haven’t been many major weather-related problems across the major corn producing locations in the U.S. Here’s a short list of why we are bullish on yield:

While above trend yields seem a near-guarantee, there are a few reasons the yield projection of 189.6 bpa could be a bit too bullish:

While we fully expect an above trend year for corn nationally and for the Corn Belt overall, this is not the case for every district, as we show in Figure 2. First though, a brief description of how to interpret the map. We have broken the map into five categorical possibilities based on season-to-date conditions, the forecast, and the NASS historical yield for each district: 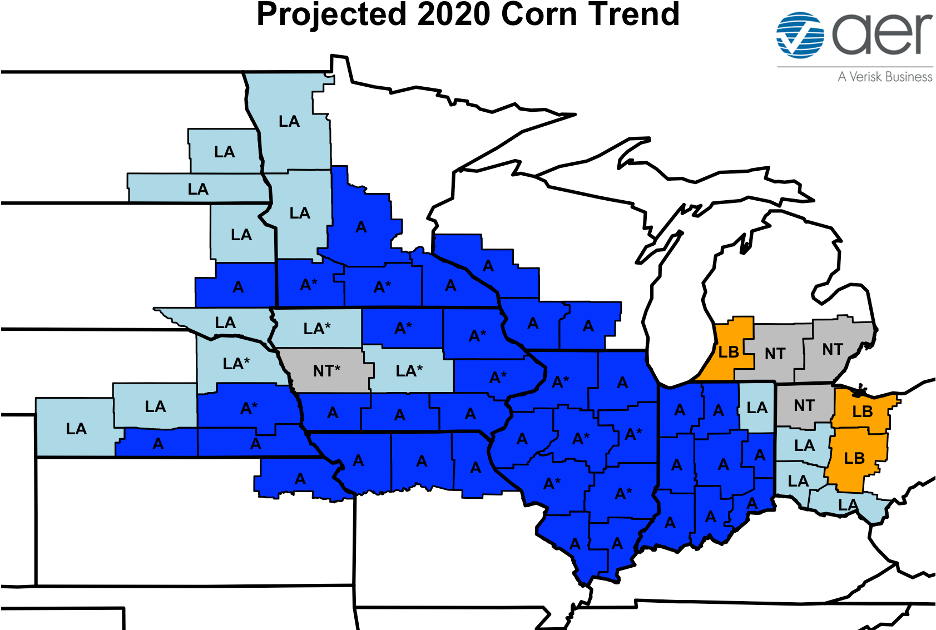 Figure 2. Categorical projections of corn trend. A- Above trend (blue); LA- Likely Above trend (light green); NT- Near Trend (gray); LB- Likely Below trend (orange); B- Below trend (red). Asterisks show the 15 districts that produced the most corn over a 20-year period from 1999-2018, as shown in this recent paper.

Of the top 15 corn producing districts (Figure 2), above trend corn is expected or likely in 14. This coupled with the likelihood of above trend, perhaps record yields, elsewhere in the Corn Belt and outside the region led us to a forecast that is around 7 percentage points above trend.  Much of the Corn Belt has had a solid growing season and above-trend corn yields can be expected in most districts. Exceptions to this are across parts of Ohio and southern Michigan where moderate flash conditions have developed over the past several weeks. While yields aren’t expected to be significantly below trend, we do expect below trend in southwest Michigan and central and north central Ohio. While we are more bullish than some on yield across western and central Iowa where a flash drought has developed this summer, it is likely to bring yields down a little closer to trend. A poor finish to the season could definitely bring west central Iowa below trend. If adequate moisture is realized over the coming weeks, then don’t be surprised to see above trend corn in west central Iowa, even though part of that crop reporting district is in severe drought. Some rainfed corn in northeast Nebraska will likely take a bit of a yield hit too (likely a bit more than west central Iowa) but irrigated corn should do well, hence the projection of likely above corn trend.

Our corn forecast is based on the following: the season to date conditions, the AER forecast for the remainder of the season, historic yield, production, and acreage data from NASS, and a regression model. Let’s take a look at each of these in a bit more detail. The season conditions to date are based on subjective interpretation of the weekly Soil Moisture Index (SMI), the Evaporative Stress Index (ESI), Quick Drought Response Index (QuickDRI), and Vegetation Drought Response Index (VegDRI) maps and the objective interpretation of the condition reports. The SMI maps are produced weekly and were developed from research done on NASA grant # NNH16CT05C, awarded to AER and the University of Wisconsin in 2016.

Retrospective analysis of the SMI in the growing season going back to 1979 shows that below trend yields are typically the case for a district if either or both of the following are valid: 1) if the more extreme dry or wet ends of the index persists for more than a month and/or 2) an unusually wet spring turns into a flash drought. For most locations, neither of the two applies this season, so above trend conditions can be expected. The districts in Ohio where we are most confident of below trend yields spent have been abnormally dry for several weeks and historic data are not suggestive that this area is as drought tolerant as western Iowa.

We then evaluate the crop condition reports from the USDA every week to see how the percentage of corn nationally and at the state level is changing and how it compares to past seasons. This year’s condition has been better than average but falls short of the very best seasons. The combination of analysis of the ESI, SMI, QuickDRI, VegDRI, the USDA NASS condition reports,  reports from crop scouts/tours, and historical corn yield data are used in a statistical regression model to determine the national yield. Finally, we use the seasonal forecast to determine if the season-to-date yield forecast should be adjusted up or down based on analog years.

Our acreage estimate is based on regression using historical NASS data and our harvest acreage estimate is based upon 92.0 million planted acres of corn this spring. The combination of the expected harvest acreage and yield led us to the expected production of 15.98 billion bushels. This is an increase over our previous official forecast in May, though we are more confident in this estimate than our previous one. General details on the AER seasonal forecast and verification from 2019 can be found on our website. For more specific questions, please contact Eric Hunt at ehunt@aer.com.

Dr. Eric Hunt is an agricultural climatologist from Lincoln, NE and has several members of his extended family actively farming in Illinois and Nebraska. Eric has been with AER since 2012 and received his Ph.D. from the University of Nebraska. Among other activities, he is currently working on NASA funded projects to study the evolution of flash drought. He routinely blogs about agriculture and weather on the AER website.

Dr. Judah Cohen is the Director of Seasonal Forecasting at AER’s home office in Lexington, MA. Judah has been with AER since 1998 and received his Ph.D. from Columbia University. Judah is perhaps best known for his NSF funded work documenting Arctic-midlatitude connections and the Arctic Oscillation, which he routinely blogs about on AER’s website.