During the 2020 growing season, Dr. Eric Hunt of Atmospheric and Environmental Research, Inc. will be providing weekly updates of the soil moisture index (SMI) from the Noah-MP land surface model in the NASA LIS framework for the entire U.S. and regional analysis of the SMI over the four regions of U.S. where the majority of corn, soybean, wheat, and cotton production occurs. The analysis is intended to provide the larger agricultural and meteorological communities insight as to areas where soil moisture is excessive or deficient compared to average for that location and what that may mean for impacts. It is my goal that these maps can be an early warning signal for flash drought development or where flash flooding could be likely in the coming week if heavy precipitation materializes. Please be advised that the SMI should be viewed as complementary, not a substitute, to the U.S. Drought Monitor (USDM) and that declarations of drought or flash flood potential for a particular location should never be based on the SMI alone. The Evaporative Stress Index (ESI) is also included in our analysis as are various other maps that help give insight into current conditions across the U.S.

The heavy precipitation over the Midwest from the late the week before is reflected in the latest map (Fig. 1), with 34 percent of the Corn Belt region having SMI values in excess of 3.0 (wettest 20th percentile). The highest concentration of the high SMI values were found in the states of Illinois, Indiana, Michigan, and Ohio. The median SMI over the Corn Belt region was at 1.9 (Table 1) as of last Thursday and likely will be higher for next week’s update after the precipitation that fell over the Memorial Day weekend.

Dryness remained in the western edge of the Corn Belt as of last Thursday morning, but precipitation from the holiday weekend is being reflected by the near real-time SPoRT LIS run in Figure 2. Further southwest into the Great Plains South negative SMI values are more prevalent, with a median of -1.2 and ~ 11 percent of grid points having an SMI of less than -3.0 compared to less than 1 percent of grid points that have an SMI over 3.0. The areas showing up as the driest in Figures 1 and 2 are in drought on the most recent U.S. Drought Monitor, with parts of eastern Colorado and western Kansas being in extreme drought (Figure 3).

Pockets of the lowest SMI values are also found in southern Alabama in the Southeast region “box” and across Florida. The warmer and drier conditions across the southern portion of the region led to rapid drying compared to the previous week, though some of this has since been eradicated. The slow-moving trough also brought beneficial precipitation to the west coast of the U.S., with substantial improvements in the SMI over northern California, Oregon, Washington, and Idaho. 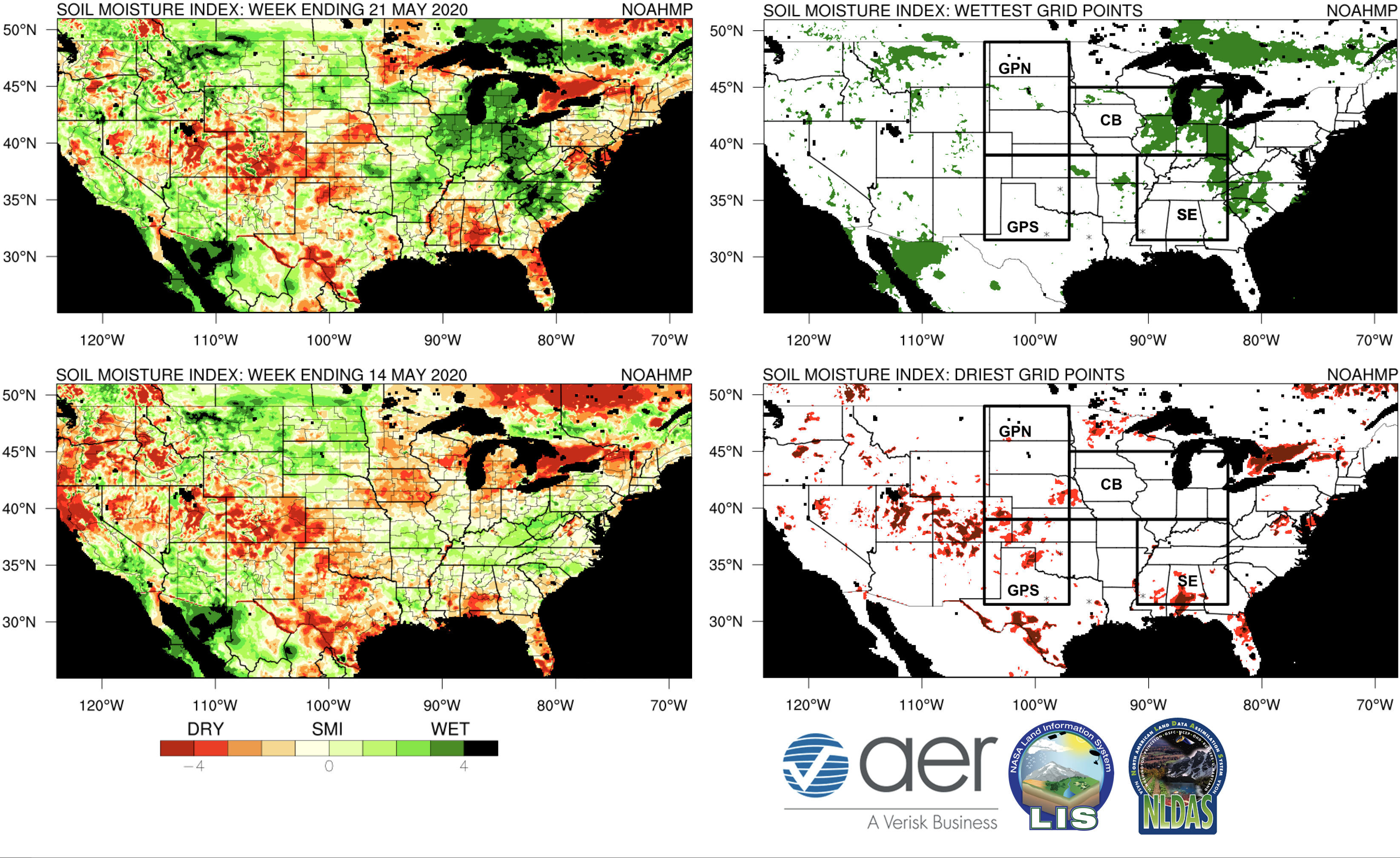 Figure 1. The Soil Moisture Index (SMI) for the 7-day period ending 21 May 2020 (top left) and 14 May 2020 (bottom left). On the right hand side are the grid points where the SMI is at or above 3.0 (top right, red) and grid points where the SMI is at or below 3.0 (bottom right, red).  Results are based on output from the 0-1 m (surface to 3.23 feet) layers in the Noah-Multiparameterization (Noah-MP) land surface model. Noah-MP is run in the NASA Land Information System (LIS) framework with the North American Land Data Assimilation Version 2 (NLDAS-2) forcing dataset. The SMI calculation is based on the soil moisture index created in Hunt et al. (2009) such that ‘5’(dark green) is the wettest and ‘-5’ (dark red) the driest for the period of record.  The period of record used calculate the SMI for the current map is 1979-present.

Table 1. The regional median SMI value from the current map and the percentage of grid points in the four regions with SMI values greater than 3.0 and less than -3.0. Regions are labeled in Figure 1 as follows: Corn Belt (CB), Great Plains North (GPN), Great Plains South (GPS), and Southeast (SE).

Figure 2. 0-100 cm relative wetness from the NASA Short-term Prediction Research and Transition Center (SPoRT) LIS simulation from 00Z on 26 May 2020. 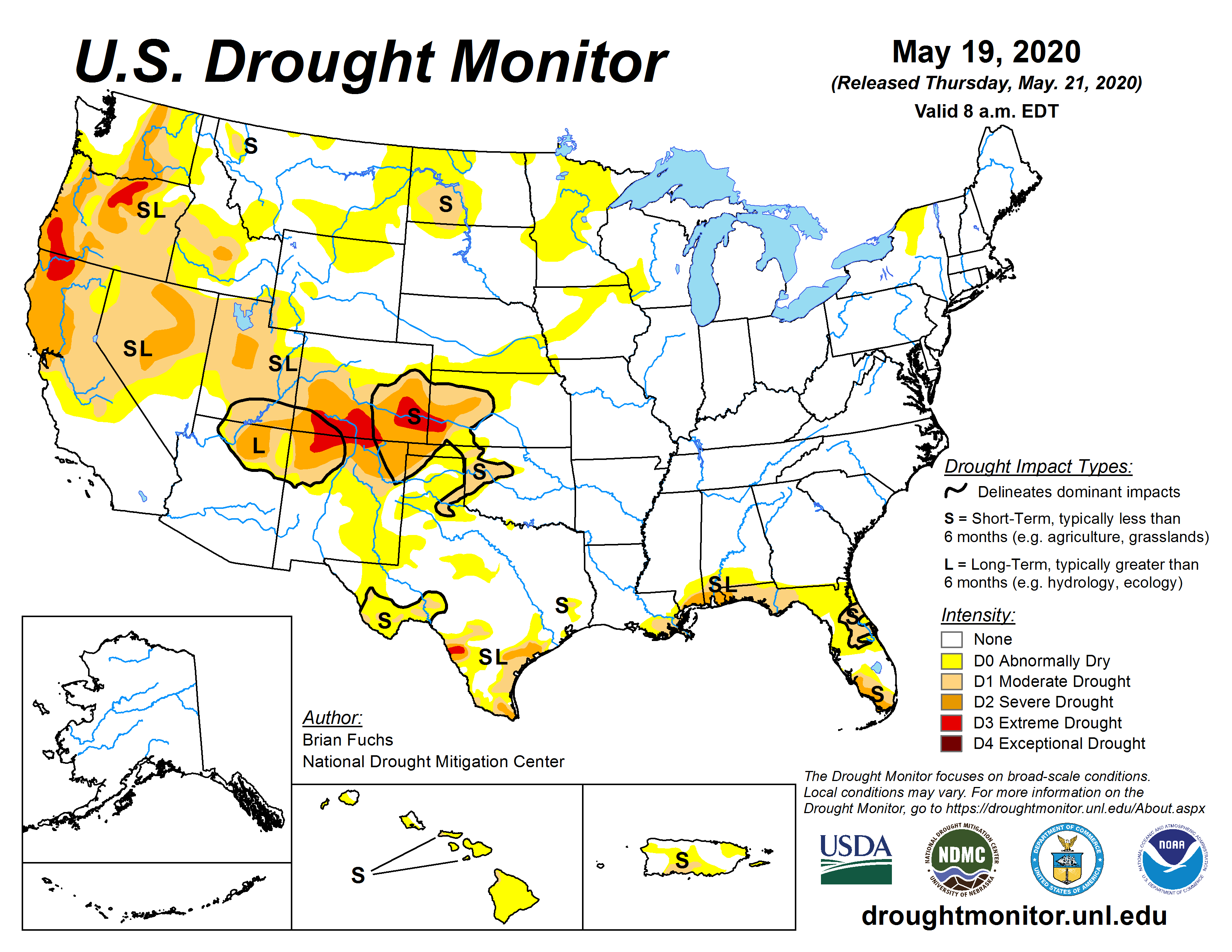 The 2-month Evaporative Stress Index (ESI; Figure 4) is not available everywhere in the U.S. yet (out of season mask indicated in white) and at this point of the season, negative values may not necessarily be indicative of drought stress on vegetation. The areas in the U.S. most worth watching as we move into June are the High Plains of eastern Colorado, Kansas, and the western panhandle of Oklahoma and into northern California and southern Oregon. The western Corn Belt has received adequate to significant precipitation in recent days so concerns there have been eliminated for the time being. Future ESI maps will likely show improvement in Nebraska and Iowa. 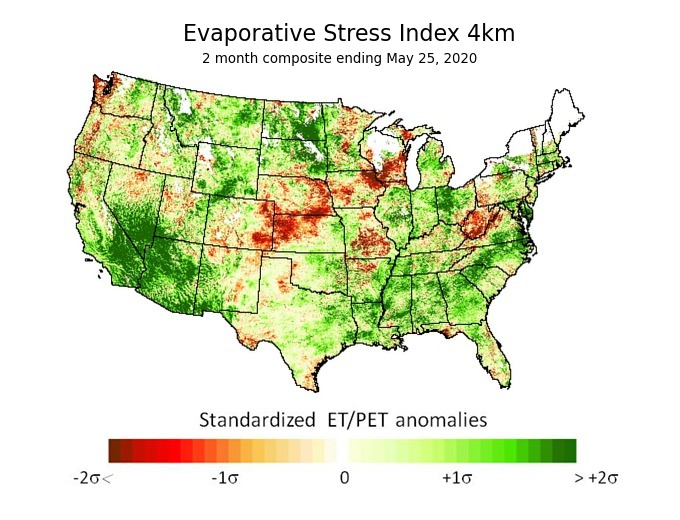 The percent of corn planted is on a much better pace than last year, with 88 percent being planted compared to a 40-year low of 58 percent at this time last year. The current percent of corn planted according to the latest USDA Crop Progress Report (88 percent) is right at the 40-year median and is above the 5-year average. A strong majority of corn (64 percent) has also emerged and 70 percent of corn is rated as good to excellent compared to 5 percent poor or very poor. Both numbers are in line with the vast majority of seasons at this point of the year and it should be noted that condition in late May is not a good predictor of final yield. While large sections of the Corn Belt have been quite wet at times over the past few weeks, the frequency of precipitation has been less than at this time last year, which should lead to much more favorable conditions for the early stages of corn and soybean compared to this time last year. Soybean numbers show 65 percent planted and 35 percent emerged, both of which are above the 5-year averages. The forecast for the first part of June looks favorably dry and warm across the Corn Belt and I don’t anticipate any significant weather-related hindrances for either crop after the middle of this week. As of now, things seem to be shaping up to be a solid growing season for both crops and think it is increasingly likely that corn will finish this season over 180 bpa nationally.