The Southeast Asia Flash Drought of 2019

During the summer and fall of 2019, a flash drought affected a large part of southeast Asia. Compared to recent droughts that affected the U.S., the amount of information regarding the extent of the impacts of the 2019 southeast Asia drought is less. But from what can be ascertained from various news sources, it appears there were significant agricultural and hydrologic impacts. For example, farmers in Laos PDR planted less than half of the 850,000 ha of rice in 2019 due to drought (Relief Web). The combination of an unusually severe drought and dam construction in China led to the lowest levels of the Mekong River by late October of 2019, according to an article by National Geographic. A February 2020 article in the Bangkok Post described the situation across Thailand as the worst drought in 40 years with significant reductions in the sugar crop. An article from November 2019 details severe drought conditions affecting crops in the Anhui province of China and a NASA article from last February provides additional impact details and shows a map of highly negative soil moisture anomalies in the first weeks of 2020 over the region of interest. However, far less attention has thus far been paid to the evolution of this flash drought, which appears to have been significant across eastern China and over Thailand, Laos, and Myanmar.

In this blog, the goal is to simply provide some preliminary analysis of flash drought development over southeast Asia in 2019 using the 1-month Evaporative Stress Index (ESI). Be advised that the ESI is just one metric for determining flash drought and thanks partly to the NASA Applied Water Sciences program, more extensive research is currently being conducted to get a complete picture of the evolution. This research is important for several reasons. First, this region of the world has been identified by Christian et al. (2021, in review) as a hot spot of flash drought and there is a need for more in-depth research on specific case studies like this. Second, this is an area where agricultural and hydrologic impacts can lead to severe socio-economic impacts, including civil conflict. Finally, the epicenters of flash drought include the area around Wuhan as well as further south where previous studies have shown higher concentrations of horseshoe bats. Thus, there may be some connection between this flash drought and the current pandemic that may also want to be explored by epidemiologists studying the origin

What are flash droughts?

Flash droughts are defined in Otkin et al. (2018) by a rapid onset and intensification of drought and are characterized by abnormally high temperatures, increased wind speeds, greater incoming solar radiation, and rapid depletion of soil moisture that leads to a marked decline in vegetation health

What is the Evaporative Stress Index (ESI)?

The Evaporative Stress Index (ESI) represents anomalies in the ratio of actual evapotranspiration (ET) to potential evapotranspiration (PET), which are generated with the thermal remote sensing based Atmosphere-Land Exchange Inverse (ALEXI) surface energy balance model. To put it more simply, the ESI estimates positive or negative anomalies in ET/PET based on the anomalies in land surface temperature for the time of year. If most of the atmospheric demand (i.e., PET) for soil moisture is being met by ET, which implies moist conditions and healthy vegetation, then land surface temperatures will be lower and ET/PET anomalies will be positive. Conversely, in times of vegetation stress, very little of the atmospheric demand for moisture is met by ET, which means the land surface temperature will be higher and ET/PET anomalies will be negative. For additional information on the technical details of the ESI, I suggest the following papers: Anderson et al. (2012) and Otkin et al. (2013).

Figure 1 (below) shows two distinct clusters of negative ESI values (red to dark red colors) in July 2019 over southern China and Myanmar and southwestern China and a secondary area in east central China. In between these regions the ESI showed positive to strongly positive values of the ESI indicating higher than average ET values and healthy vegetation. Areas in white have no signal due to too much cloud cover from the summer monsoon. 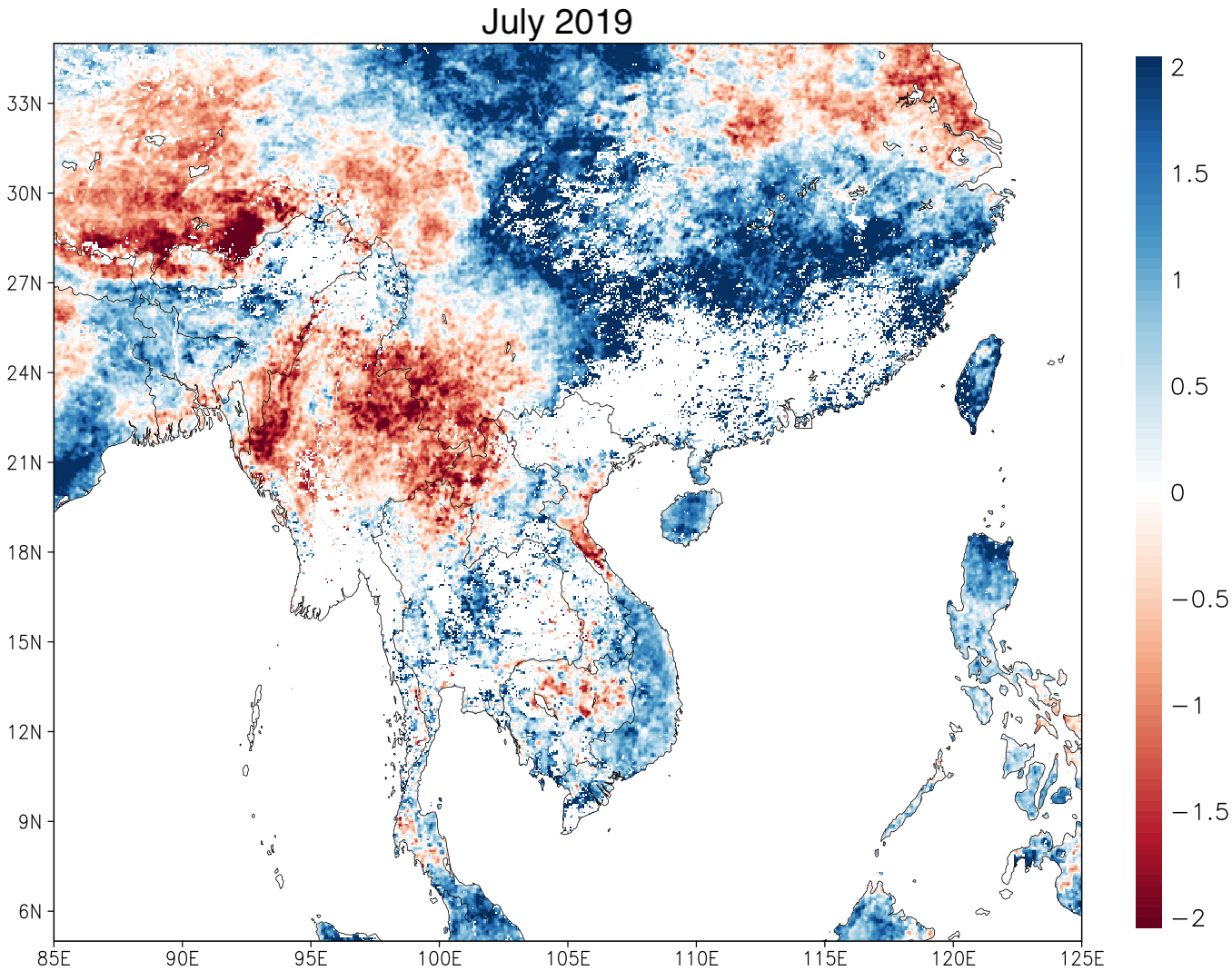 By September of 2019 the ESI indicates that flash drought had developed and intensified across east central China along and south of the Yellow River (Fig. 2, below).  Strongly negative values of the ESI remained across western China with another pocket across southern China. Unfortunately cloud cover masked much of the signal across the south Asian countries of Myanmar, Thailand, Cambodia, Laos, and Vietnam. No definitive answer can be given using the current version of the 1-km ESI as to whether the area was possibly experiencing drought, even though reports from those countries would suggest there was. 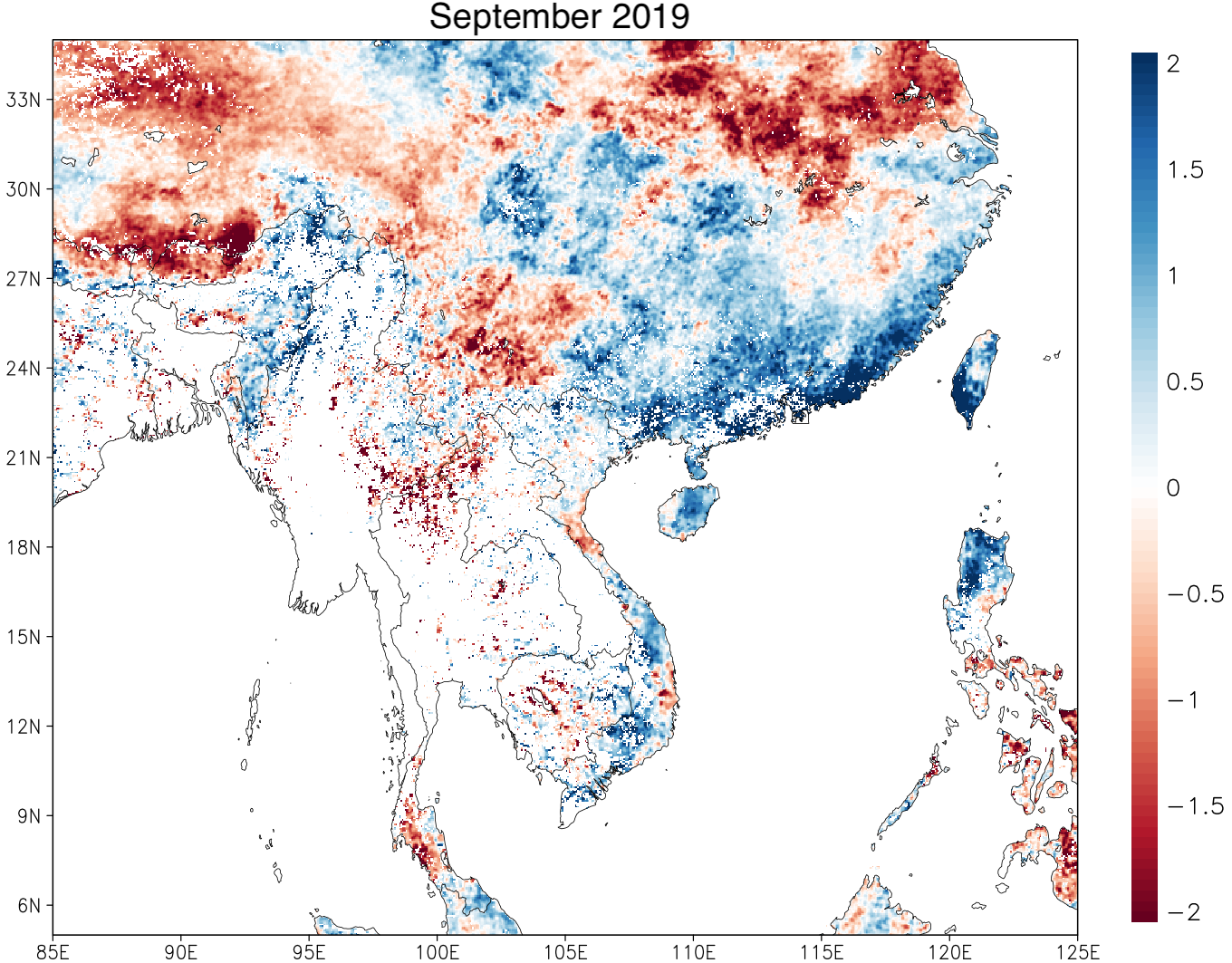 Between September and November 2019, the ESI indicates an impressive expansion and intensification of flash drought across east central and southeast China, with the most strongly negative values centered in the region around Wuhan. The ESI also indicates a secondary cluster of potentially severe drought across Myanmar, Thailand, and Laos. Additional research will need to be conducted to determine the overall severity in these areas but at a minimum, I would say much of east central China was in severe and possibly extreme drought by November of 2019. 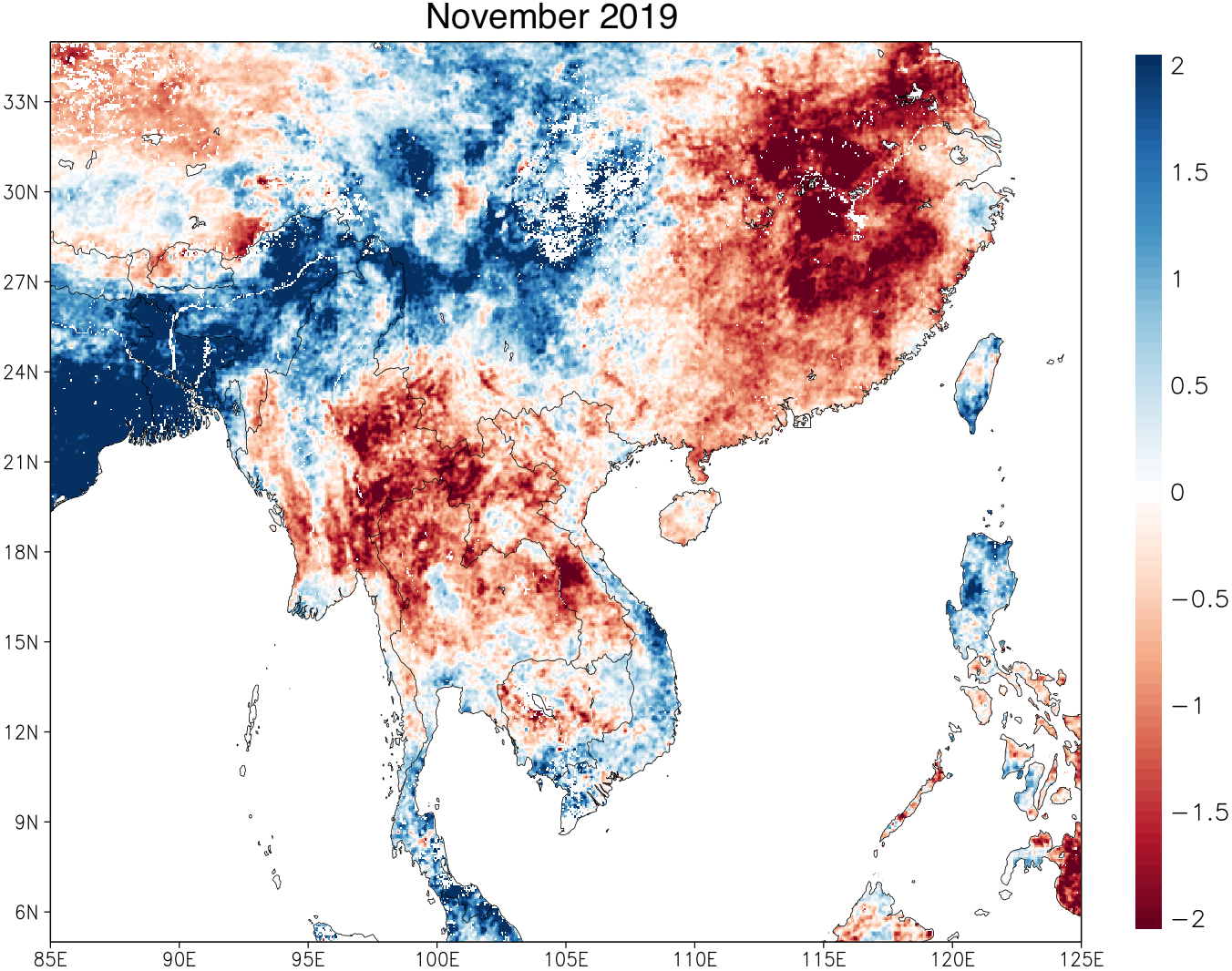 A terrific inter-disciplinary team across multiple institutions has been assembled to conduct a study over the next several months to determine the evolution and the drivers for this drought. Results from the study will be published in a peer reviewed journal. Any epidemiologists interested in collaborating with us on this are welcome to contact me.

This blog post was partially supported by NASA grant 80NSSC19K1266. Many thanks to Dr. Christopher Hain of NASA-MSFC for providing the maps and to my fellow colleagues working on this project.