Much warmer temperatures returned to the central U.S. last week,  running upwards of 15F above average for early June in parts of the western Corn Belt and northern Plains. While precipitation was not received everywhere across the Corn Belt over the past week, most places had received enough precipitation to keep the soils sufficiently moist (Figure 1) with a median SMI of 1.4 (Table 1) as of last Thursday morning. The root zone soil sas no doubt declined across much of the region since then, with the latest SPoRT LIS run from 00Z Monday morning indicating drying across the regions where temperatures this past weekend were most above average. But between a slow-moving cold front coming in from the west and remnants of Tropical Storm Cristobal moving up the Mississippi River Valley, most of the region should receive adequate, if not significant, precipitation over the next few days. This will be followed by a return to more seasonal temperatures so soils across the Corn Belt should remain favorably moist for at least a few more weeks even with minimal precipitation after tomorrow.

There are two main regions of concern on the dry side currently. First, the ongoing drought across portions of the central and southern High Plains (Figures 1-3). While this area of drought has not been that expansive to this point, the percentage of the Great Plains South region with an SMI below -3.0 nearly doubled over the previous week (i.e., from 10.4 to 18.8 percent). Though it was still under 20 percent, the forecast for the coming weeks is favorable for further deterioration to the south and southeast. Another area of concern is across New England, which has been quite dry over the past month and most of the region now has an SMI under -3.0. This hasn’t shown up as drought on the Drought Monitor just yet but this region also tends to get characterized as being in drought less frequently than other parts of the U.S., so if this dryness continues there will be some impacts to streamflow and small farms that dot that part of the U.S.

Much of the western U.S. is still listed in drought but the current SMI maps would indicate that improvement has occurred over the past several weeks. This is good because indications now are the latter half of the summer of 2020 favors more recent summers for that region, which means consistently warmer than average temperatures that lead to more atmospheric demand for moisture. The southeastern U.S. was mostly in decent shape as of last Thursday, with a median SMI of 0.2. Cristobal has already some drought relief to the Gulf Coast area and likely will help keep the agriculturally important Mississippi Delta region moist going into a more critical time for the corn and soybean crops.

Figure 1. The Soil Moisture Index (SMI) for the 7-day period ending 4 June 2020 (top left) and 28 May 2020 (bottom left). On the right hand side are the grid points where the SMI is at or above 3.0 (top right, red) and grid points where the SMI is at or below 3.0 (bottom right, red).  Results are based on output from the 0-1 m (surface to 3.23 feet) layers in the Noah-Multiparameterization (Noah-MP) land surface model. Noah-MP is run in the NASA Land Information System (LIS) framework with the North American Land Data Assimilation Version 2 (NLDAS-2) forcing dataset. The SMI calculation is based on the soil moisture index created in Hunt et al. (2009) such that ‘5’(dark green) is the wettest and ‘-5’ (dark red) the driest for the period of record.  The period of record used calculate the SMI for the current map is 1979-present. 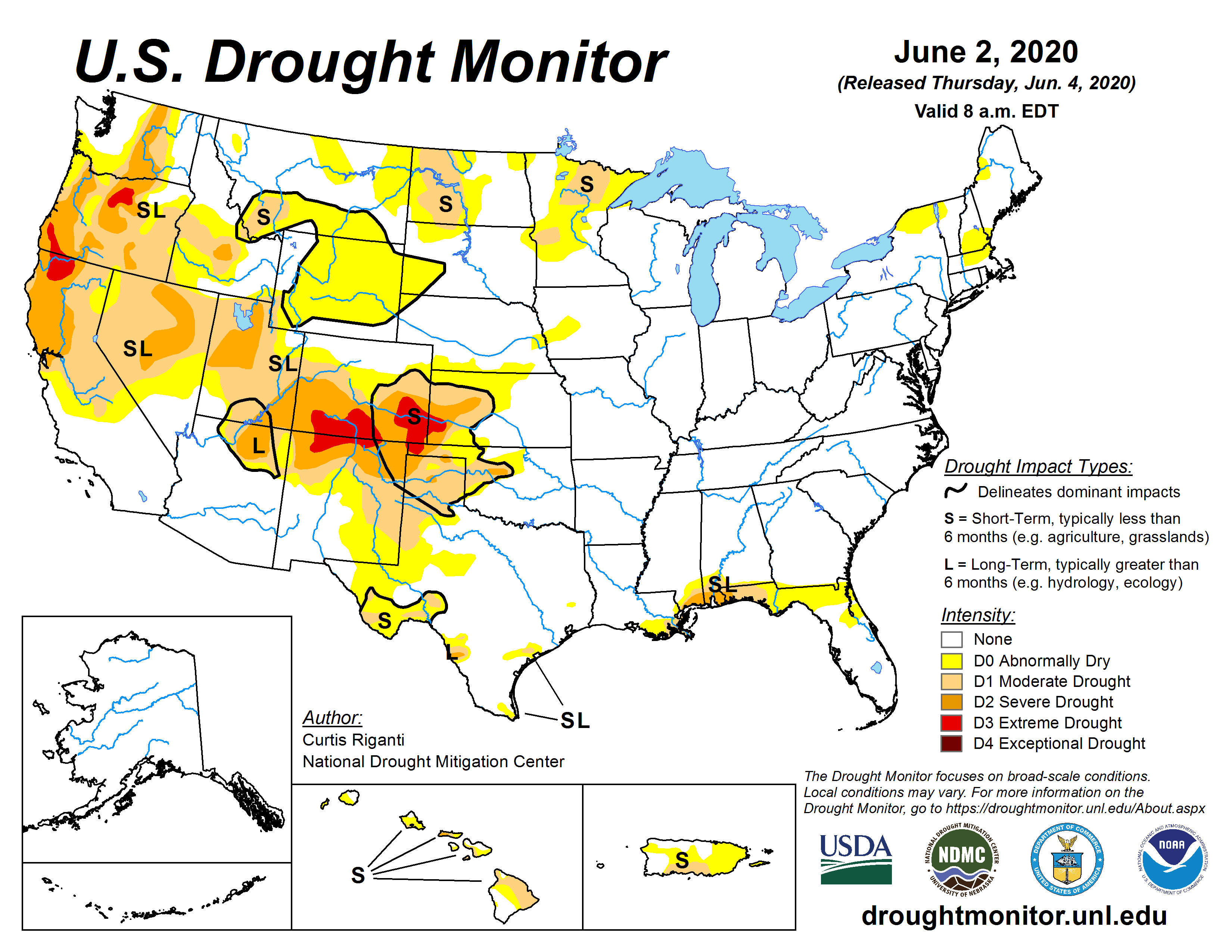 It is too early to write-off possible issues from heat and/or a late-season flash drought but as of now, it is my opinion that there is very little chance for a significantly below trend corn crop this season. Figure 3 shows that the Corn Belt median SMI (as of last Thursday) was 1.4, which is on the wetter side of the spectrum but nowhere near as moist as last year at this time. As I mentioned in last week’s Ag Blog, there is definitely signal for slightly dry soils at this time of the season in a year with high end yields (dark blue circles) but such was also the case in 2012. Thus, while soil moisture at this point in the season can be helpful in determining final yields, there is a lot of season to go yet. In the AER Corn Yield forecast I put together a month ago, the outlook was for corn to finish around 183 bpa nationally. That forecast still seems on track, though I would bet the over and not the under on that number. 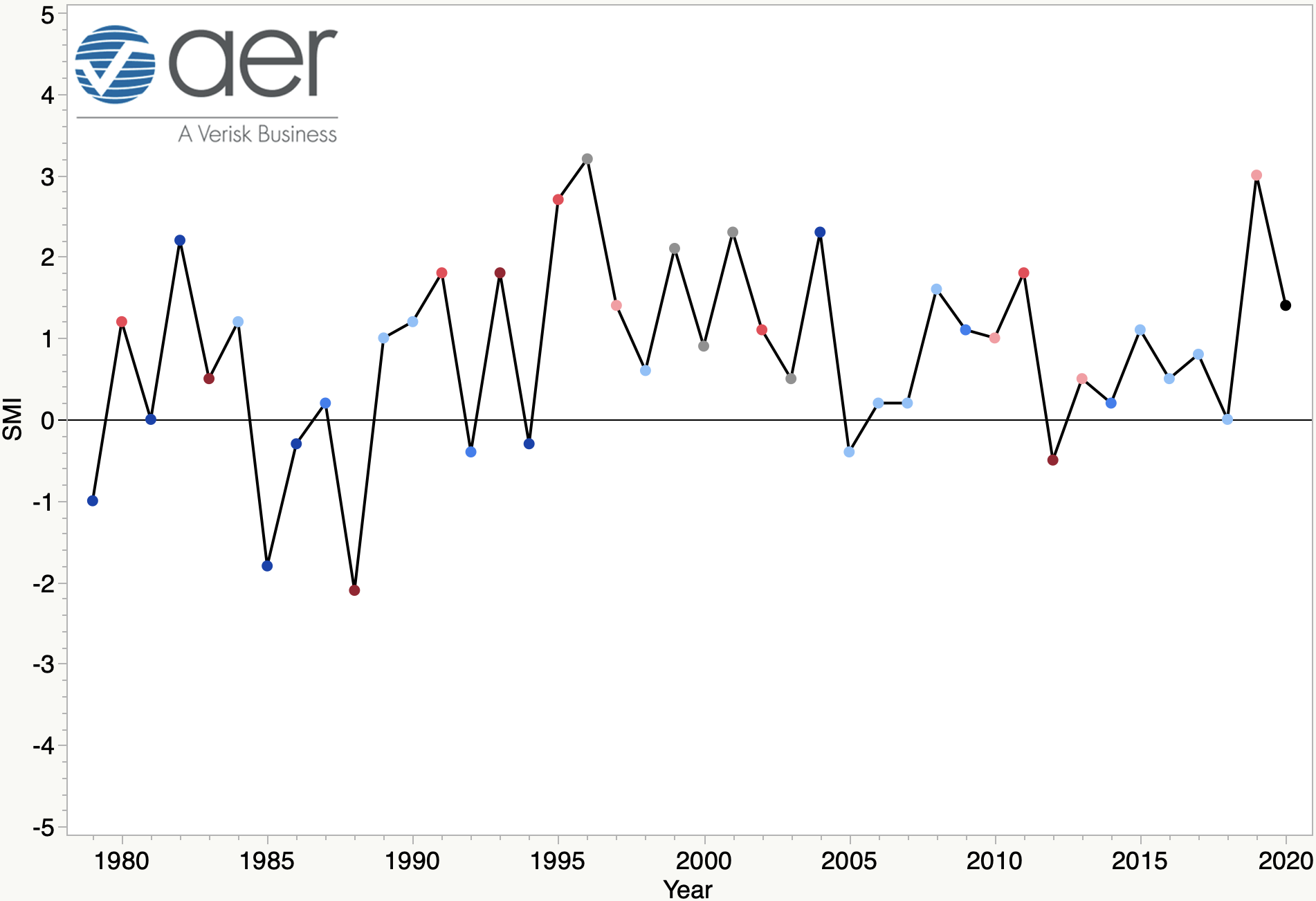 According to the latest Crop Progress Report, planting of the U.S. corn crop is nearly complete (97 percent) and soybean isn’t far behind at 86 percent. U.S. corn is currently rated at 75 percent Excellent/Good against 4 percent Poor/Very Poor. Soybean numbers are nearly identical at 72 and 4 percent respectively. No state with major production has more than 20 (10) percent of its corn (soybean) crop considered P/VP. The winter wheat crop is close to 90% headed with harvest beginning in some places. Wheat condition is decent overall, 51 percent E/G vs. 19 percent P/VP, with a higher percentage of poor crop conditions in Colorado and Oklahoma, likely corresponding with the drought. 78 percent of cotton has been planted across the U.S., with slower progress noted in Oklahoma and Missouri.