As of last Friday, the drought across the Western Corn Belt continued to intensify and expand further south and east (Figures 1-3; Table 1). The ESI map (Figure 5) from yesterday shows a clear “bullseye” of drought-stressed vegetation over west-central Iowa. VegDRI and QuickDRI maps (Figures 6-7) are a bit dated but both have done a very nice job of capturing where the biggest impacts to corn and soybean are likely. For a more in-depth analysis of the drought, please see last week’s Ag Blog. The good news is the current system in the central U.S. is bringing much needed moisture to places that have been lacking in moisture over the last several weeks and next week’s map is likely to look much different. While this rain is too late to be helpful to the crops, significant recharge of soil moisture going into the cold season is important. Much of this region affected by drought in the Corn Belt does not necessarily get enough precipitation to erase large root zone soil moisture deficits over the winter, so significant recharge this week may be helpful for the next crop. Another upside is this is occurring now and not in a few weeks, which could set back harvest.

Storms early last week brought significant moisture to the 1-40 corridor (Fig. 4), with high SMI values the rule from central Oklahoma eastward to the Atlantic Ocean. Much needed rain also fell last Tuesday over parts of the central Corn Belt, though it was not enough in most cases to significantly bring up the SMI. But it may have been just in time to give a needed boost to soybean and later-planted corn. Much of Ohio and Pennsylvania still had negative SMI values but there was definite improvement over the previous weeks (see Fig. 2). Same story with the SMI the New England states, though the GRACE product (Fig. 3) still indicates significant dryness over this region.

Much of the west remains very dry and the record heat the past several days isn’t helping matters. Note that the higher SMI values in California are reflective of marginally better than average soil moisture, which in early September honestly doesn’t mean anything. Fires will continue to be an ongoing concern, even in places where the SMI is positive. The drought in the High Plains also had a significant toll on pasture condition, with GrassCast projecting a 30 percent reduction in grass production over much of eastern Colorado and eastern New Mexico. 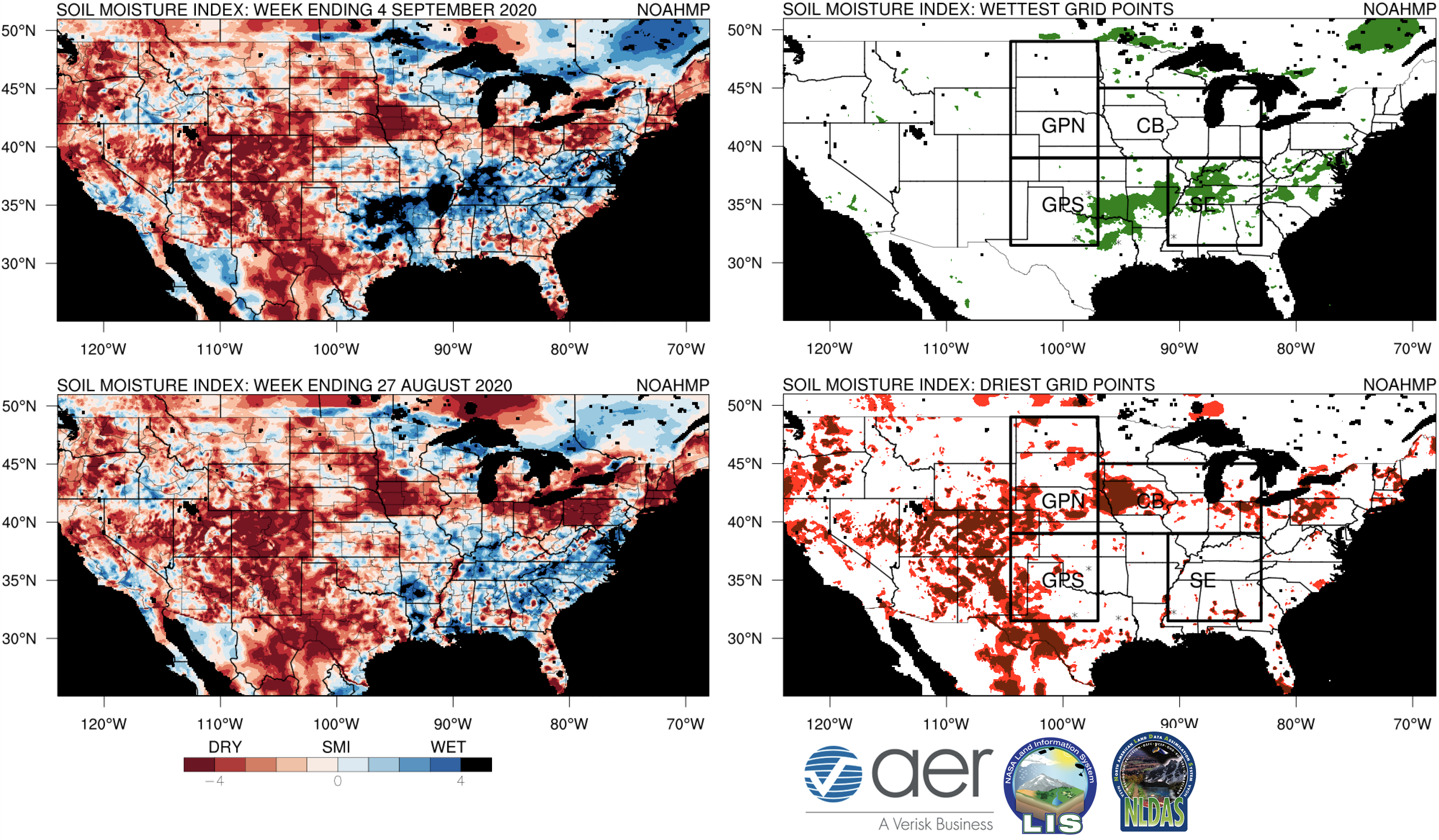 Figure 1. The Soil Moisture Index (SMI) for the 7-day period ending 4 September 2020 (top left) and 27 August 2020 (bottom left). On the right hand side are the grid points where the SMI is at or above 3.0 (top right, green) and grid points where the SMI is at or below 3.0 (bottom right, red).  Results are based on output from the 0-1 m (surface to 3.23 feet) layers in the Noah-Multiparameterization (Noah-MP) land surface model. Noah-MP is run in the NASA Land Information System (LIS) framework with the North American Land Data Assimilation Version 2 (NLDAS-2) forcing dataset. The SMI calculation is based on the soil moisture index created in Hunt et al. (2009) such that ‘5’(dark green) is the wettest and ‘-5’ (dark red) the driest for the period of record.  The period of record used calculate the SMI for the current map is 1979-present. 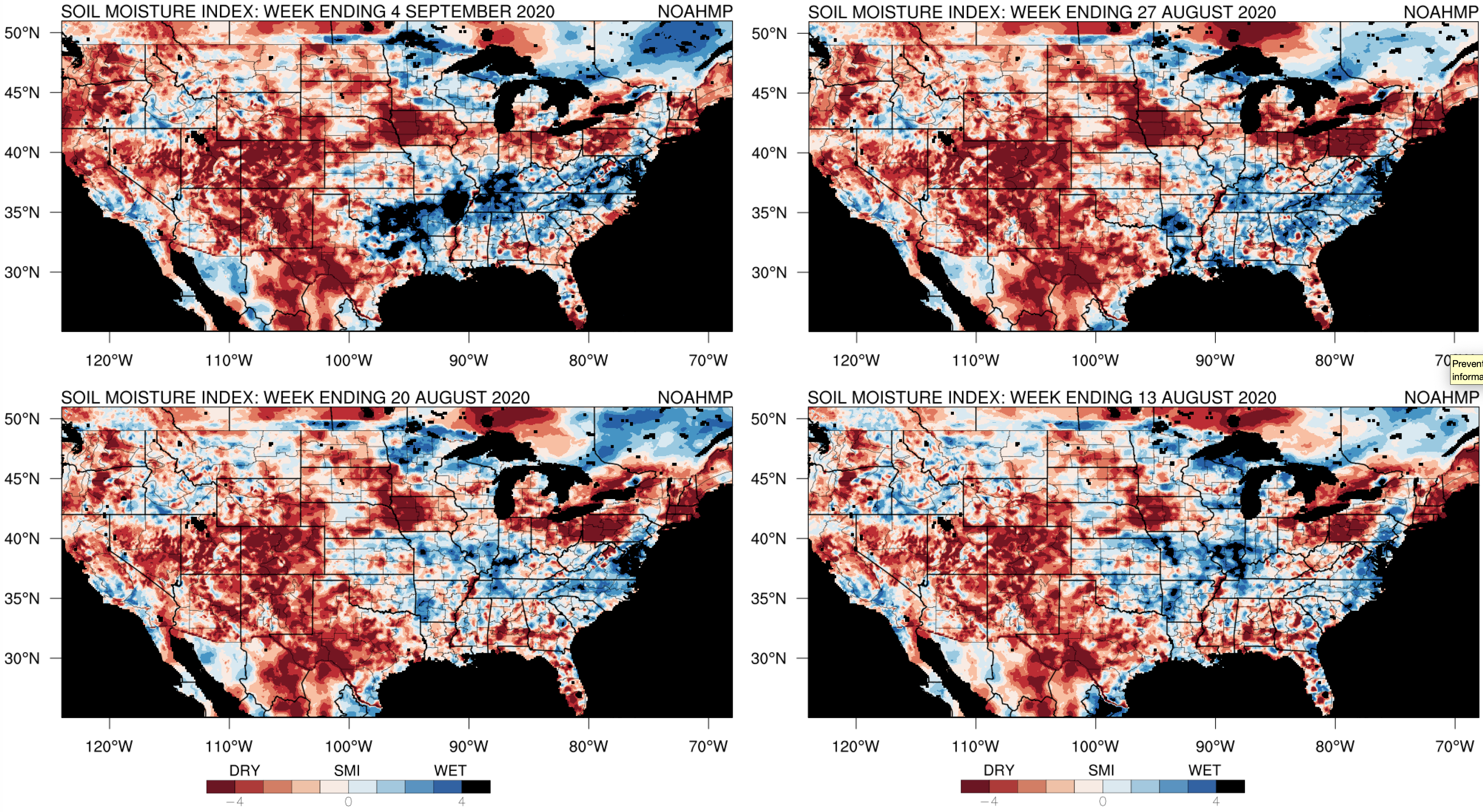 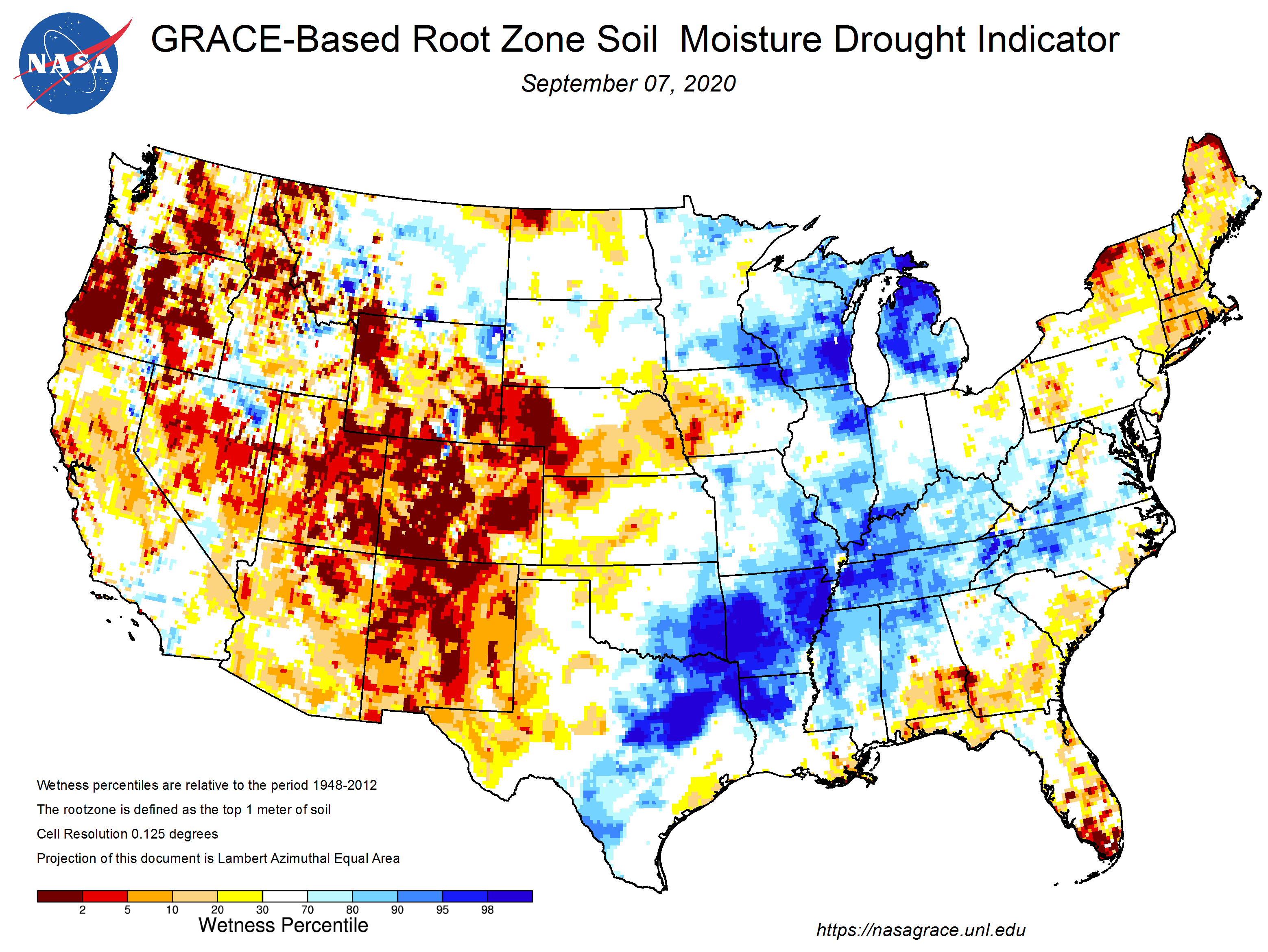 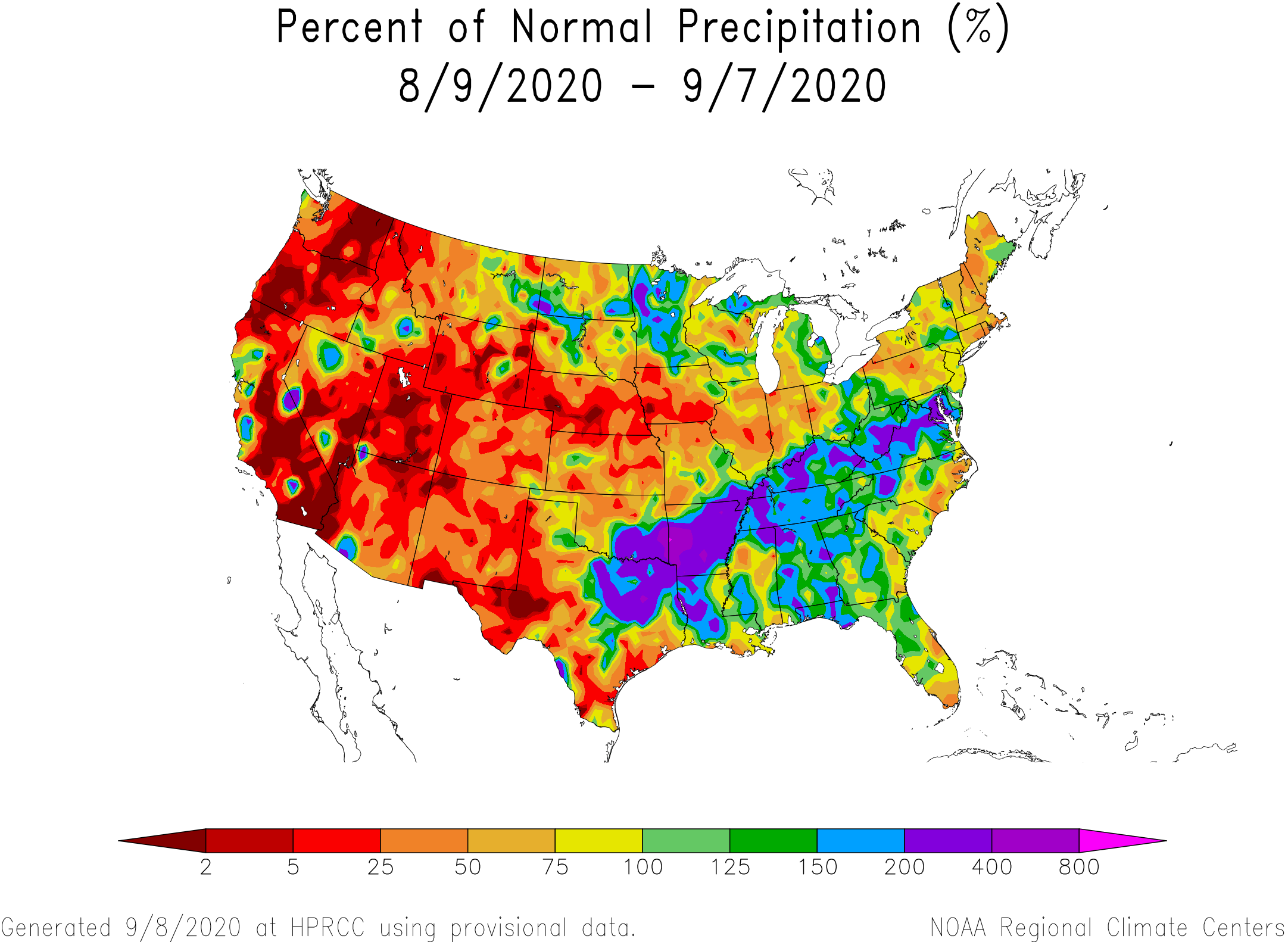 Figure 4. Percent of normal precipitation over the past 30 days (through Monday 7 September).  Map courtesy of the High Plains Regional Climate Center. 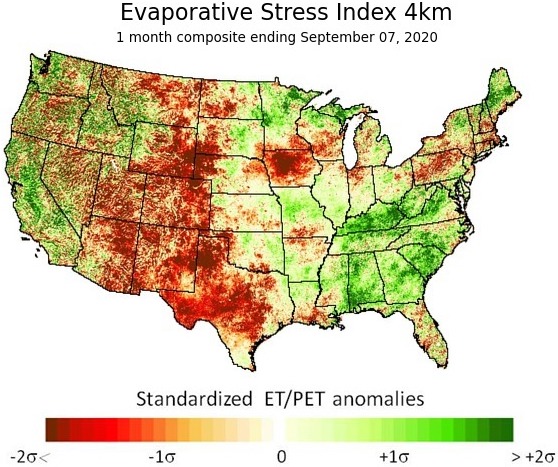 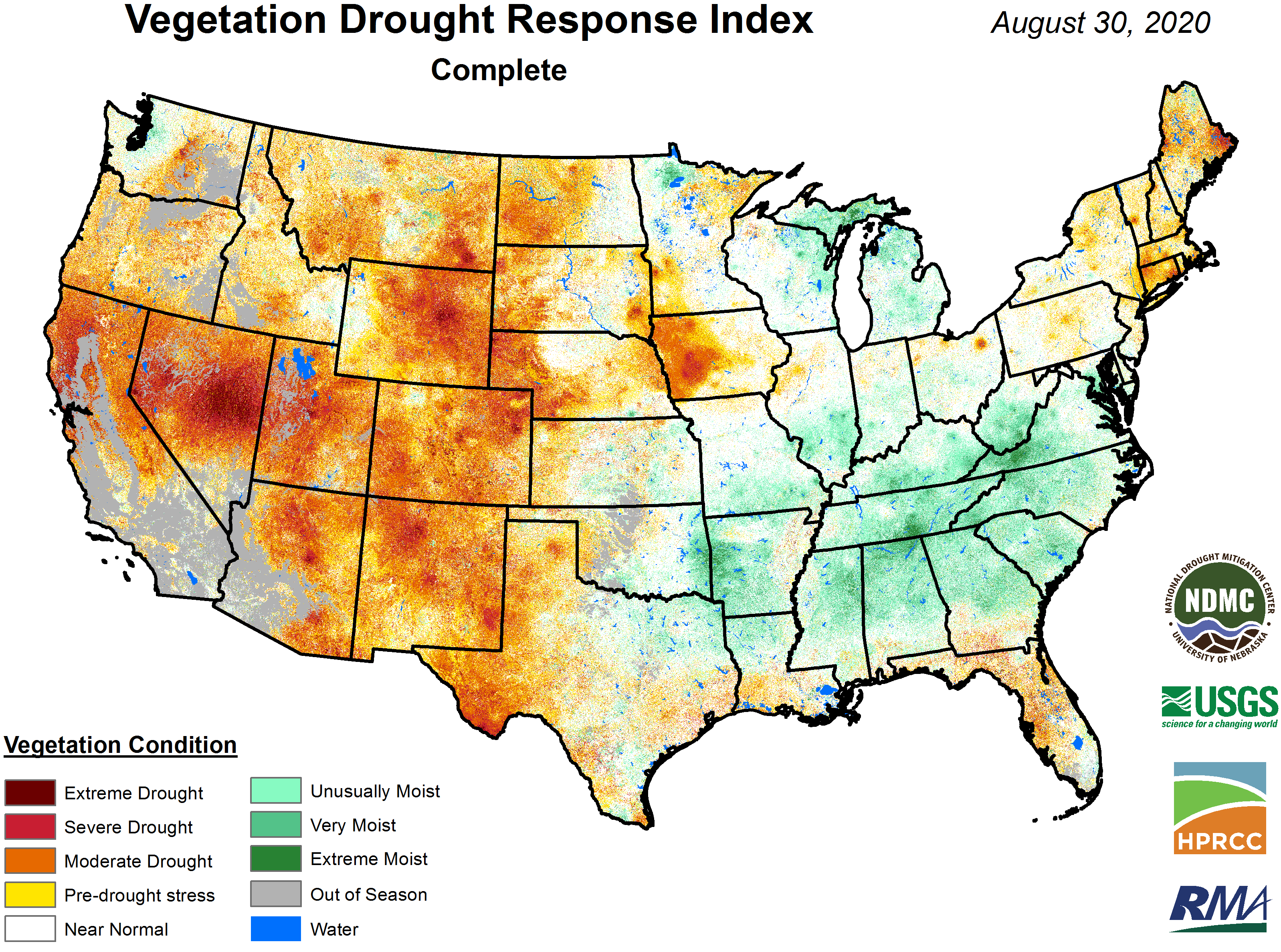 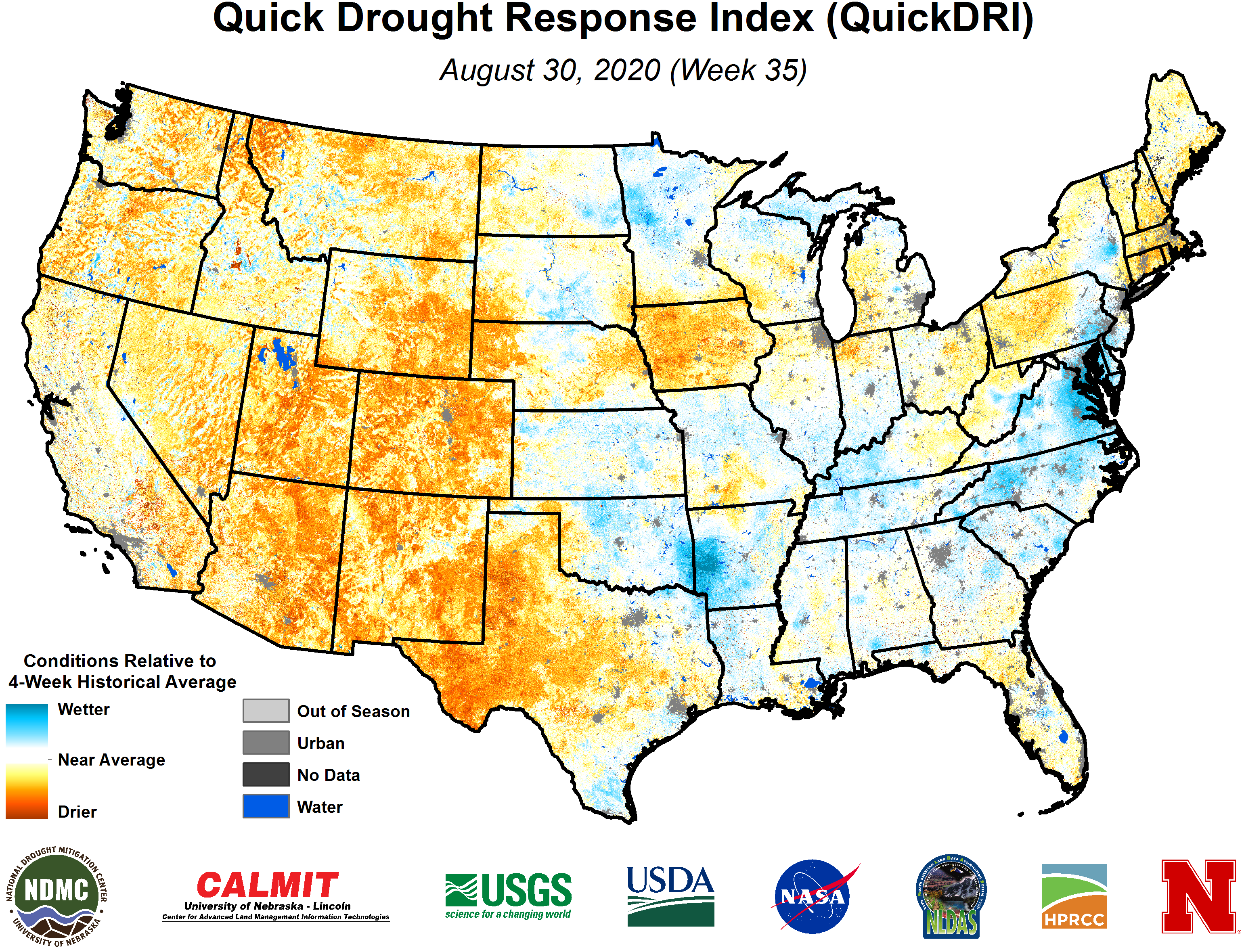 According to the latest Crop Progress Report, 61 percent of corn is rated Excellent/Good (E/G) vs. 14 percent Poor/Very Poor (P/VP), about where it was last week. A quarter of Iowa corn is rated as P/VP but the other major corn producing states generally have 10 percent or less in P/VP. A quarter of the corn crop has reached maturity and 80 percent is in dent stage. Both numbers are slightly above the 5-year average. Soybean condition is about the same as last week with 65 percent E/G vs. 10 percent P/VP, and leaves are starting to drop in most states. Cotton continues to be in good to fair condition, with poorest conditions across Texas where drought has been the rule this season.