The latest SMI map looks similar to recent maps across the central U.S., with a large area of strongly negative SMI values across the western half of Iowa and northeast Nebraska (Figures 1-3; Table 1). As of this current writing on Monday afternoon, a fast moving MCS has brought needed rain today to northeast Nebraska and Iowa. Unfortunately, it has also brought some pretty high winds, which hopefully didn’t cause too much damage to corn. The U.S. Drought Monitor shows varying levels of drought, ranging from moderate to extreme drought, over the western Corn Belt. Figure 4 shows that the USDM levels can be justified based on the precipitation deficits this summer. Perhaps the million dollar question right now is “How much impact has the flash drought this summer caused to crops?” The latest VegDRI map (Fig. 6) shows moderate drought over much of west-central Iowa and the northeastern quadrant of Nebraska, with pockets of extreme drought. However, it is safe to say that the ESI and QuickDRI maps are not in 100% agreement on drought severity over this area, showing only more isolated to scattered pockets of stress as opposed to widespread moderate to severe stress. So what is closer to the truth and why is there is such a discrepancy?

First, let’s consider the following drought paradox: It is possible for two locations to statistically have the same level of drought (e.g., through the SPI, percent of normal precipitation, soil moisture index, etc…) and have noticeably different impacts to agriculture. In other words, drought impacts are not spatially equitable because soils are not spatially equitable for crop production. In the case of western and central Iowa, it is my hypothesis that the absence of extreme heat, very deep roots in those deep, fertile soils, unique groundwater interaction (in certain places), modern genetics, and just enough of “shots” of moisture have kept the crops from getting highly stressed. If the same conditions were occurring in a place with more marginal ground or back in 1990, the result may be quite different. In a drive across Iowa over the weekend, I can confirm that there are stressed corn and soybean fields. But it was amazing how much corn between Omaha and Des Moines visibly looked healthy, even though some of it was in an area classified as D2 or D3 drought. In closing discussion about the western Corn Belt, my best sense of judgment is that QuickDRI is the closest indicator to reality for assessing possible impact to crops from the ongoing drought.

Much of the eastern U.S. needed rain last week but in some cases got more than they bargained for from Tropical Storm Isaias. The end result is a widespread swath from North Carolina to Vermont with strongly positive SMI values, with the highest concentration of soils at or exceeding field capacity found from eastern Virginia to New Jersey. In some places, this is as moist as the soils have been all growing season. Further to the south across Georgia and southern Alabama, the SMI has been negative for several weeks and deserves close attention as we go into the fall for possible development and expansion of flash drought. There is also a small area in west Tennessee that has been quite dry of late. Other areas of concern for drought include the central and southern High Plains (as has been the case all season), central Washington state down into Oregon, and much of the more arid southwest which has largely missed out on the monsoon this season. For an assessment of how conditions are affecting grass and forage production in the High Plains, I recommend checking out GrassCast. 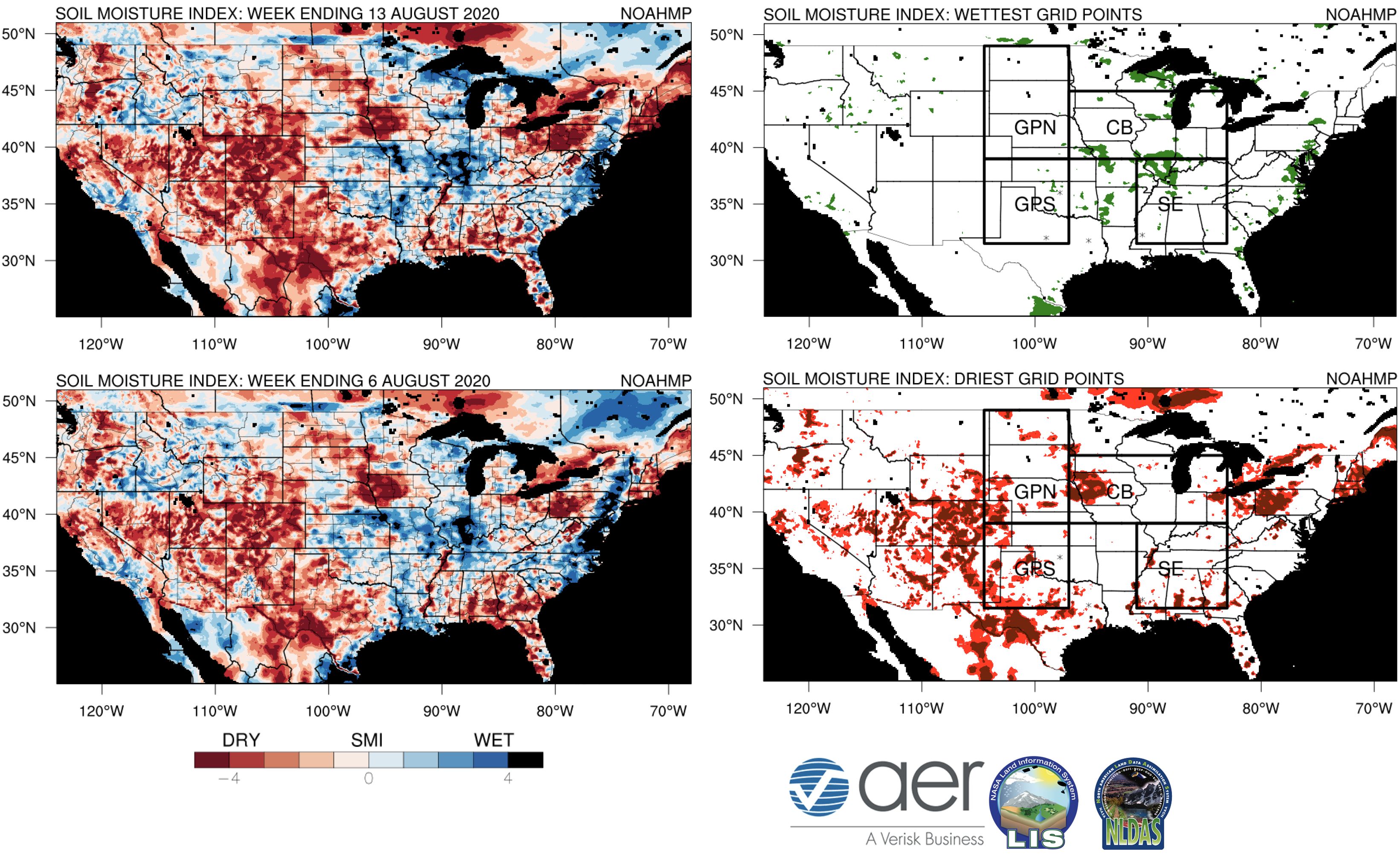 Figure 1. The Soil Moisture Index (SMI) for the 7-day period ending 6 August 2020 (top left) and 30 July 2020 (bottom left). On the right hand side are the grid points where the SMI is at or above 3.0 (top right, green) and grid points where the SMI is at or below 3.0 (bottom right, red).  Results are based on output from the 0-1 m (surface to 3.23 feet) layers in the Noah-Multiparameterization (Noah-MP) land surface model. Noah-MP is run in the NASA Land Information System (LIS) framework with the North American Land Data Assimilation Version 2 (NLDAS-2) forcing dataset. The SMI calculation is based on the soil moisture index created in Hunt et al. (2009) such that ‘5’(dark green) is the wettest and ‘-5’ (dark red) the driest for the period of record.  The period of record used calculate the SMI for the current map is 1979-present. 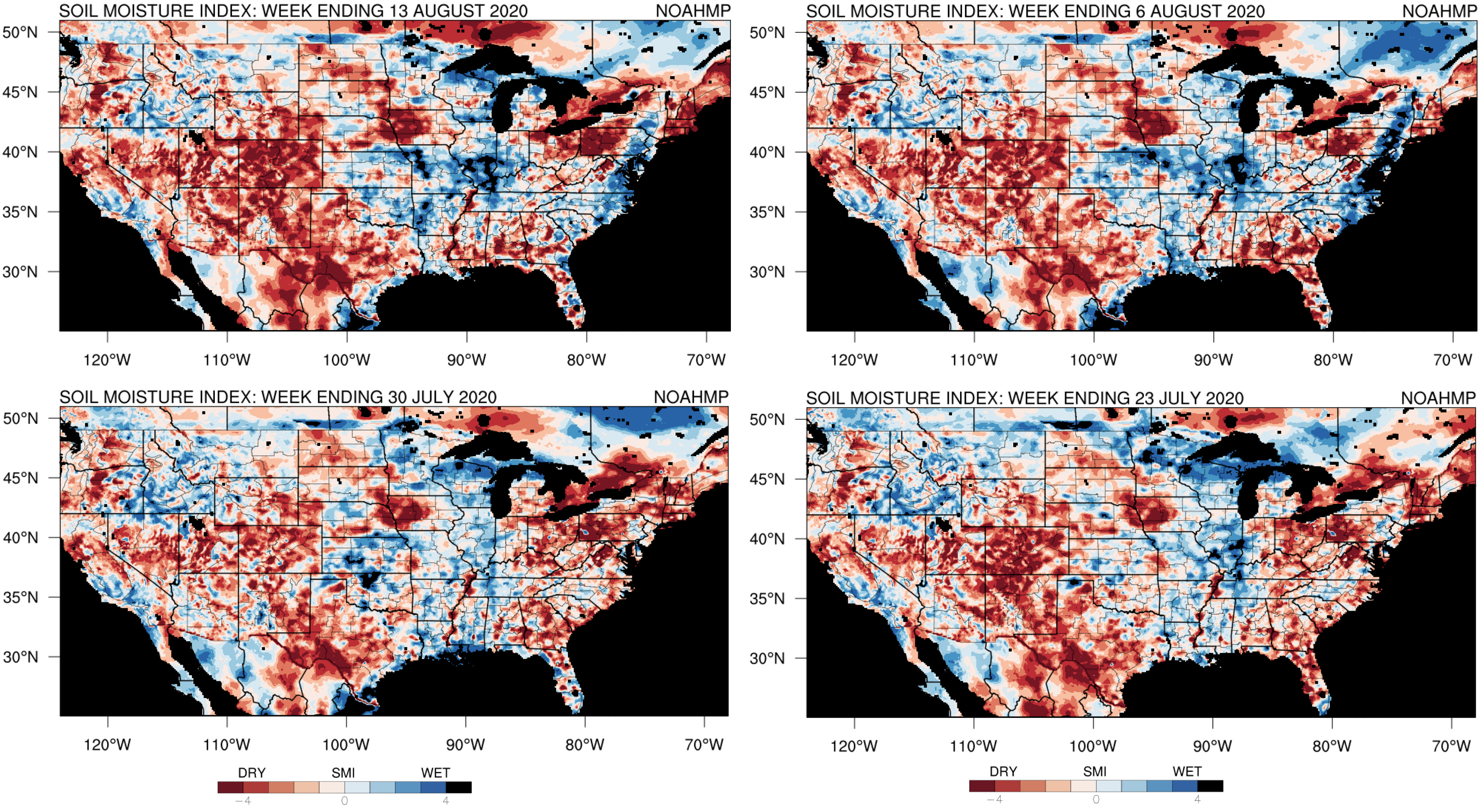 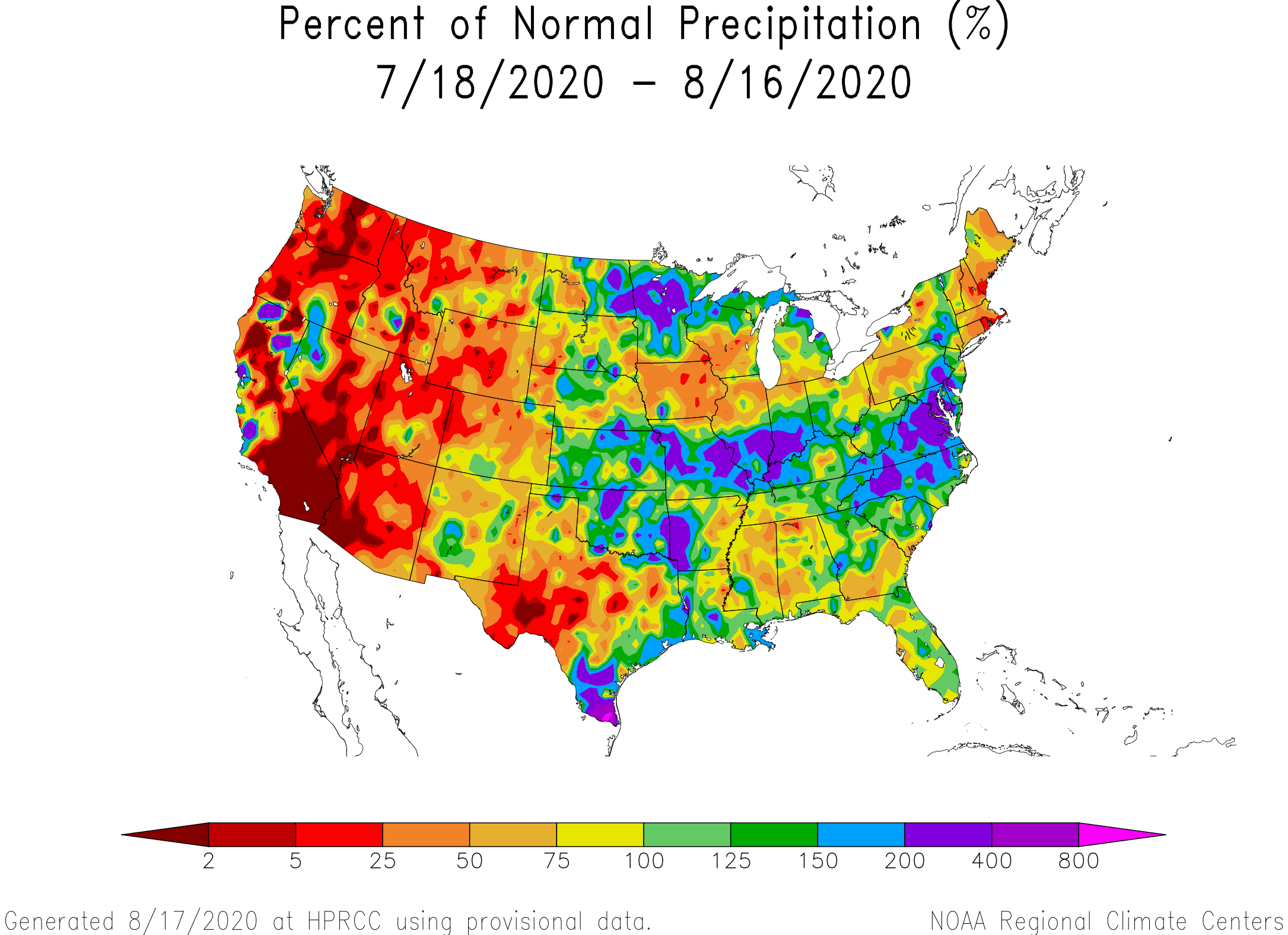 Figure 4. Percent of normal precipitation over the past 30 days (through Sunday 9 August).  Map courtesy of the High Plains Regional Climate Center. 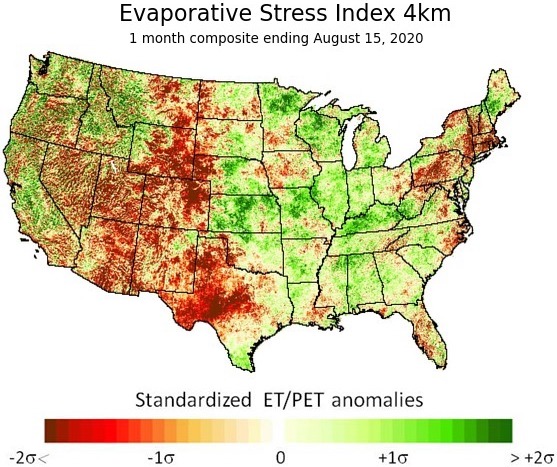 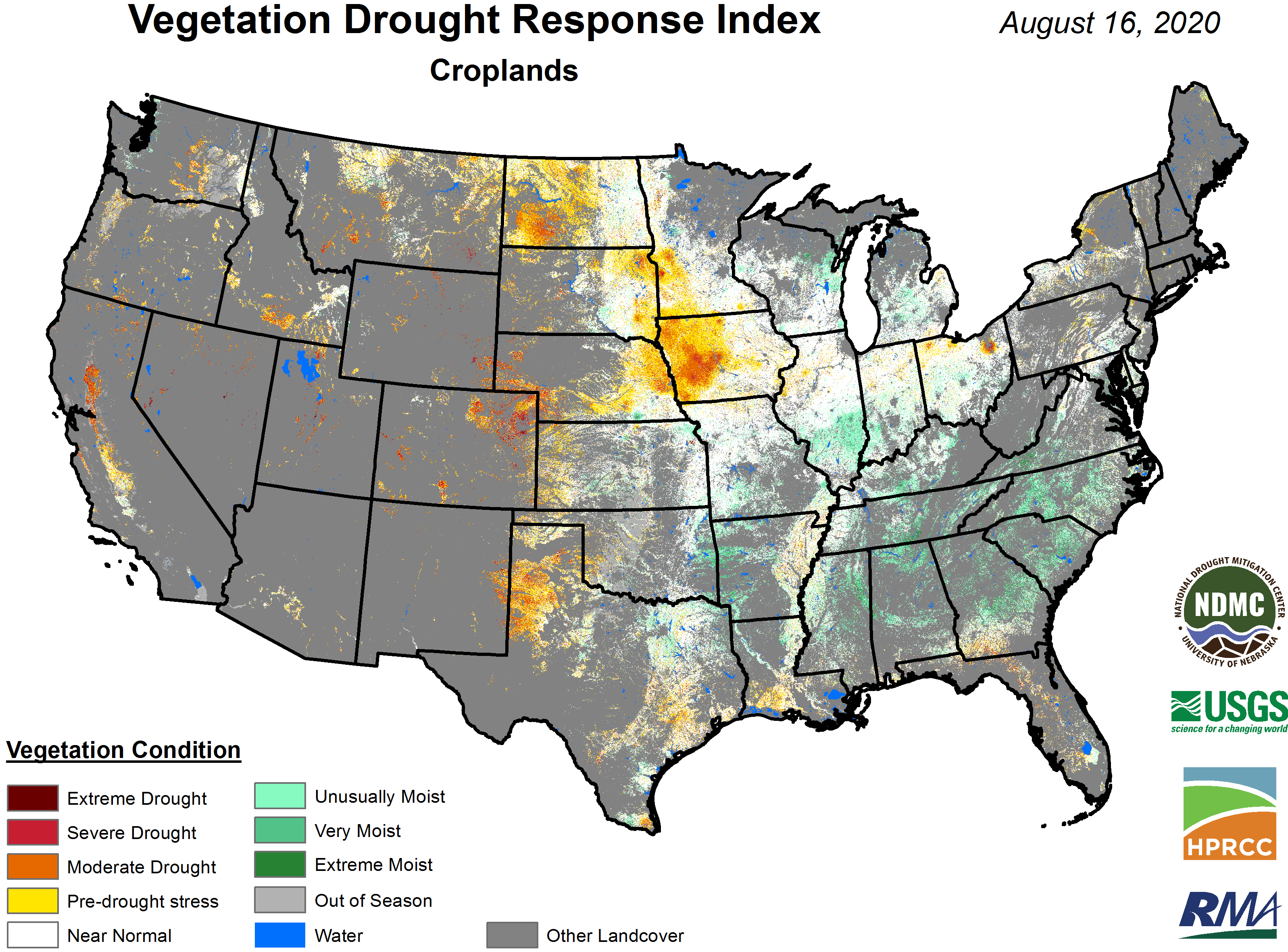 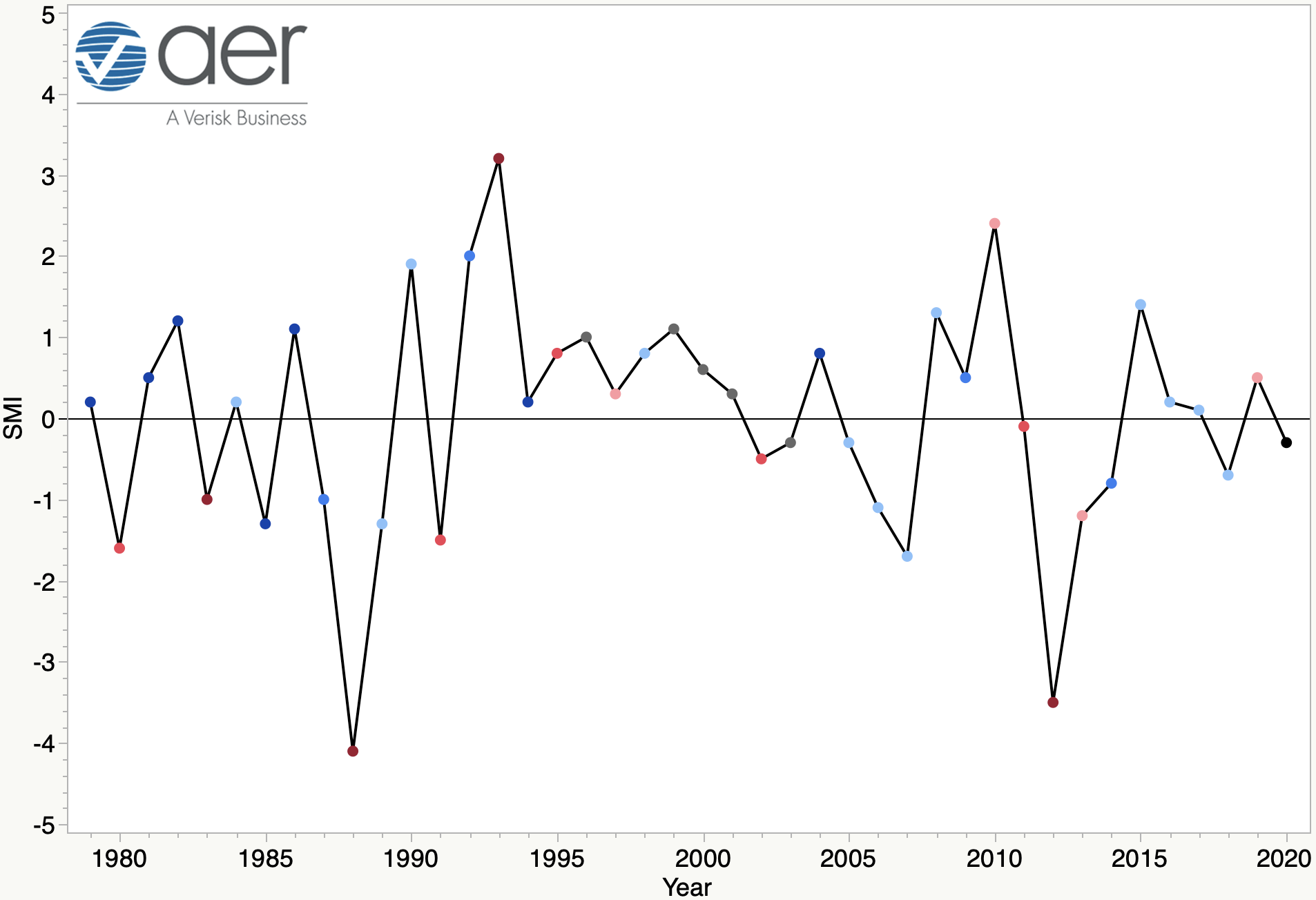 According to the latest Crop Progress Report, U.S. corn is currently rated at 71 percent Excellent/Good (E/G) against 8 percent Poor/Very Poor (P/VP), essentially the same as it’s been for several weeks. Figure 8 shows that the median SMI of the Corn Belt is at 0.1 and continues to be in the same range as 2014-2018, all years with decently above trend corn. The percent of corn in the dough stage increased to 59 percent and a little over 10 percent of U.S. corn is in the dent stage. Soybean condition numbers improved over last week, currently at 74 and 5 percent respectively, with increasing chances of record soybean yields in the U.S. too. Spring wheat harvest is underway in the northern U.S. with a very solid majority in good to excellent condition.  Cotton conditions continue to be mostly in good to fair condition, with some increase in the percent of cotton in P/VP condition. Best cotton conditions continue to be found in Alabama, Louisiana, and Oklahoma. Worst conditions are in Texas, as has been the case for most of the season. 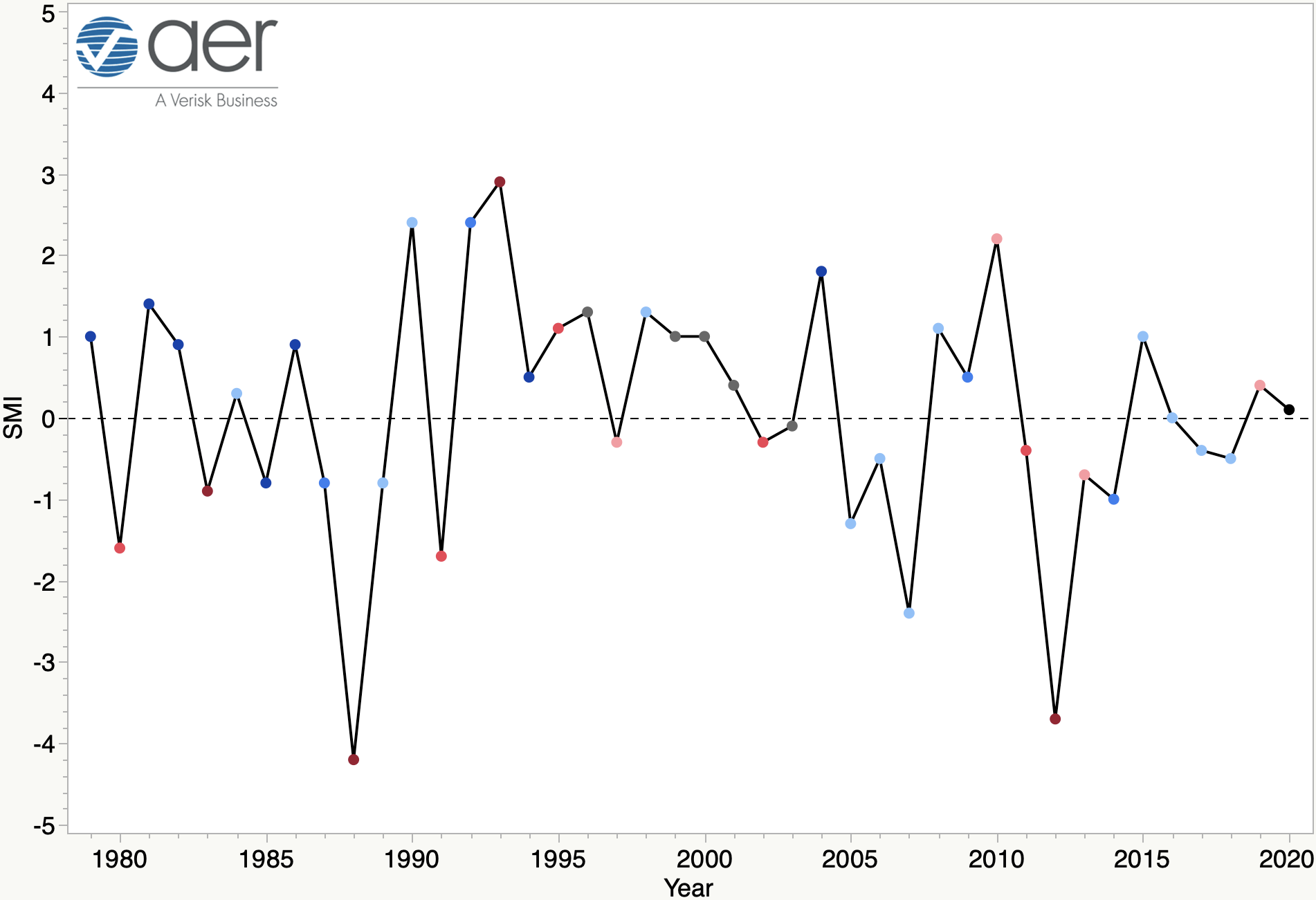 Figure 9 shows that the AER corn yield forecast is at 189.6 bushels per acre (bpa), released last Monday in our official forecast. 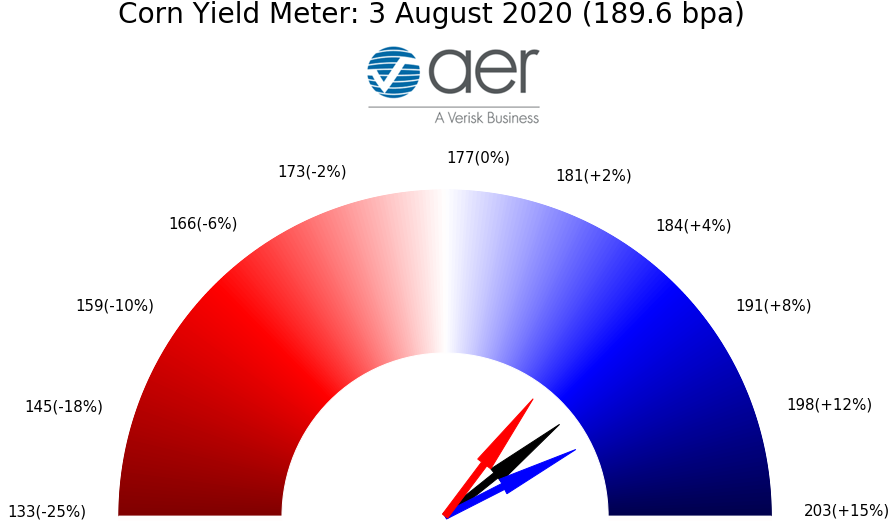