During the 2021 growing season, Dr. Eric Hunt of Atmospheric and Environmental Research, Inc. will be providing weekly updates of the soil moisture index (SMI) from the Noah-MP version 3.6 land surface model in the NASA LIS framework for the entire U.S. and regional analysis of the SMI over the four regions of U.S. where the majority of corn, soybean, wheat, and cotton production occurs. Additionally, soil moisture index maps of South American and western Russia are provided at the end of the blog. The analysis is intended to provide the larger agricultural and meteorological communities insight as to areas where soil moisture is excessive or deficient compared to average for that location and what that may mean for impacts. It is my goal that these maps can be an early warning signal for flash drought development or where flash flooding could be likely in the coming week if heavy precipitation materializes. Please be advised that the SMI should be viewed as complementary, not a substitute, to the U.S. Drought Monitor (USDM) and that declarations of drought or flash flood potential for a particular location should never be based on the SMI alone. The Evaporative Stress Index (ESI) and VegDRI will included in our analysis a bit later this season. Various other maps that help give insight into current conditions across the U.S will also be shown as needed.

As we move into the middle of April, plentiful rains and mild temperatures the past several weeks have made for several good photo opportunities of blooming flowers and lush green grass here in my hometown of Lincoln, NE. But some parts of the country have been less fortunate with precipitation over recent weeks, and in many cases the lack of precipitation dates back to late 2019 or early 2020.  Figure 1 shows that a majority of the U.S. had SMI values less than ‘0’ as of last Thursday, meaning soils are drier than average for the time of year. But the worst-off areas (Fig. 2) remain the southwestern U.S. from west Texas to California and over North Dakota, where conditions are probably getting dire. Other areas of concern are the eastern Great Lakes region, east Texas, and parts of northeast Iowa.

In the case of the eastern Great Lakes and east Texas, the SMI is under ‘-3’ at most points and the water content of the top 1m has declined over the past 30 days (Fig. 3). Much of the latter is in drought on the latest U.S. Drought Monitor map (Fig. 4), while much of the eastern Great Lakes region is abnormally dry (which is technically not drought, think of it is a drought watch). At first glance northeastern Iowa isn’t as bad off as the former two locations but this area has missed most of the decent moisture that has come through the central U.S. over the past month, including over the past weekend, which was after the cutoff for the maps. While this isn’t cause for alarm, this is an area that will be worth watching as we move into the spring. Most places in the eastern Corn Belt did receive decent precipitation over the past weekend (after the map cutoff) but additional precipitation will be required to fully recharge soils.

Compared to the analogs we used for the initial corn forecast six weeks ago, there is a higher percentage of root zone soil moisture below ‘-3’ (or the 20th percentile) currently than in the other analog years, though 2011 and 2012 were close. In the case of 2011, much of the low SMI values were across the south-central U.S. and in 2012, there were multiple smaller pockets of very dry soils, including in the Corn Belt. As of now, much of the Corn Belt has adequate or marginally adequate moisture (especially compared to 2012) and the dryness is mostly outside the region. While this is indeed a good thing, the area of extreme drought in the northern Plains will be worth watching for possible creep into the Corn Belt as we move into May and June. That is not my prediction but incipient dryness in the spring across North Dakota has preceded significant drought in the Corn Belt in the past. Thus, it will be worth watching.

Perhaps the biggest question now is “Will this be a season with a good head start to the planting across the Corn Belt?”  The short answer is “Don’t count it.” With troughing projected over the eastern U.S. over much of the rest of the month, temperatures will be below average with periodic shots of light precipitation. While the precipitation would be welcome in parts of the Corn Belt for soil recharge (e.g., parts of Iowa and Indiana), the air temperatures likely will be cool enough to keep soil temperatures from being suitable to plant in many places. My current estimate is much of the region won’t be planting much before May 1st this year. While on the topic of planting, if decent precipitation doesn’t materialize soon in most of North Dakota, it will be the grimmest conditions facing spring wheat farmers at planting in many years, possibly decades.

The cooler conditions in the next few weeks will need to be watched carefully too, as sub-freezing temperatures could be harmful to the winter wheat crop in Kansas and western Oklahoma. Some of the winter wheat belt has also been quite dry over the past 3-4 weeks and is another area worth watching for drought formation/expansion. 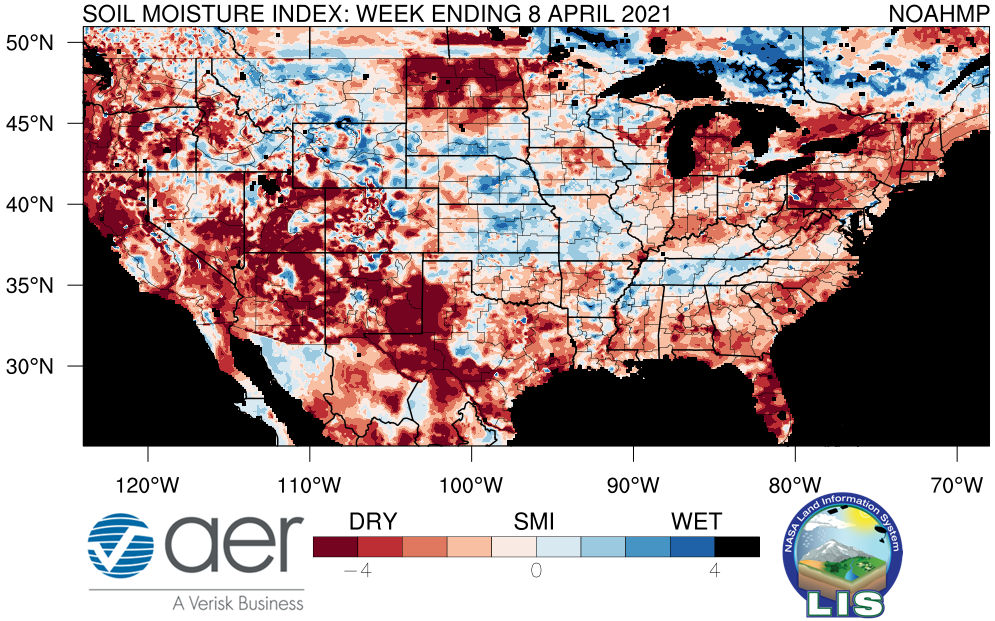 Figure 1. The Soil Moisture Index (SMI) for the 7-day period ending 8 April 2021. Results are based on output from the 0-1 m (surface to 3.23 feet) layers in the Noah-Multiparameterization (Noah-MP) land surface model. Noah-MP is run in the NASA Land Information System (LIS) framework with the North American Land Data Assimilation Version 2 (NLDAS-2) forcing dataset. The SMI calculation is based on the soil moisture index created in Hunt et al. (2009) such that ‘5’(dark blue) is the wettest and ‘-5’ (dark red) the driest for the period of record.  The period of record used calculate the SMI for the current map is 1979-present. 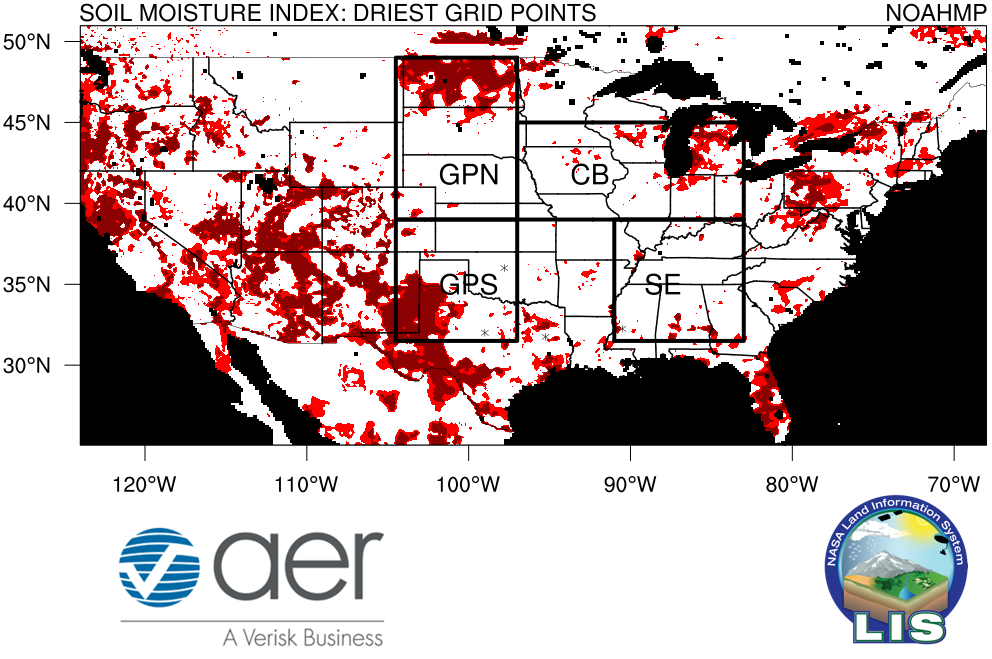 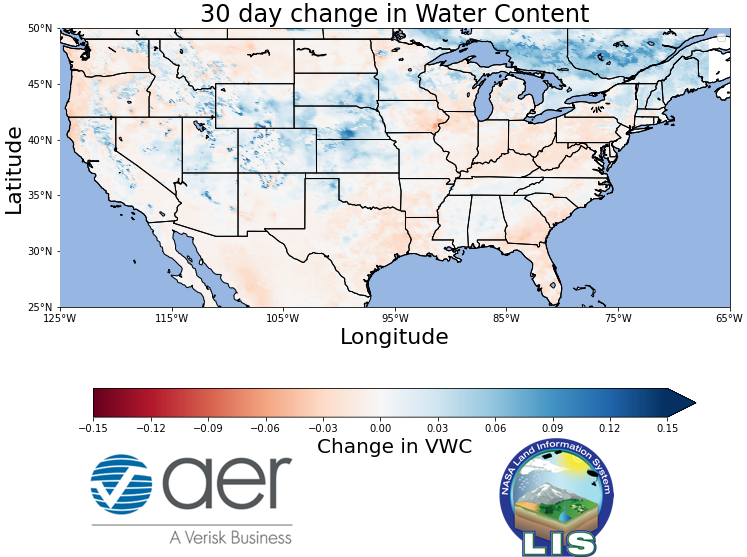 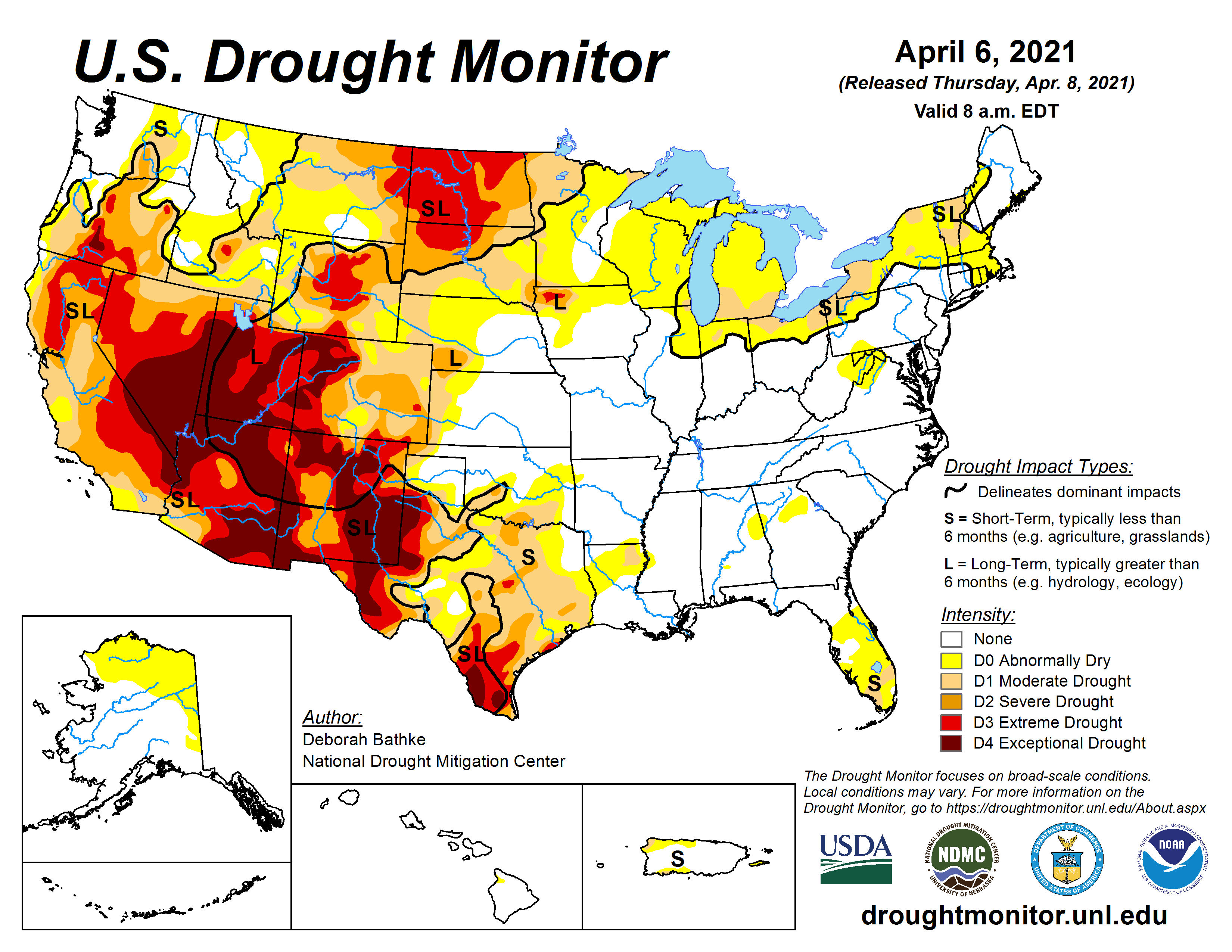 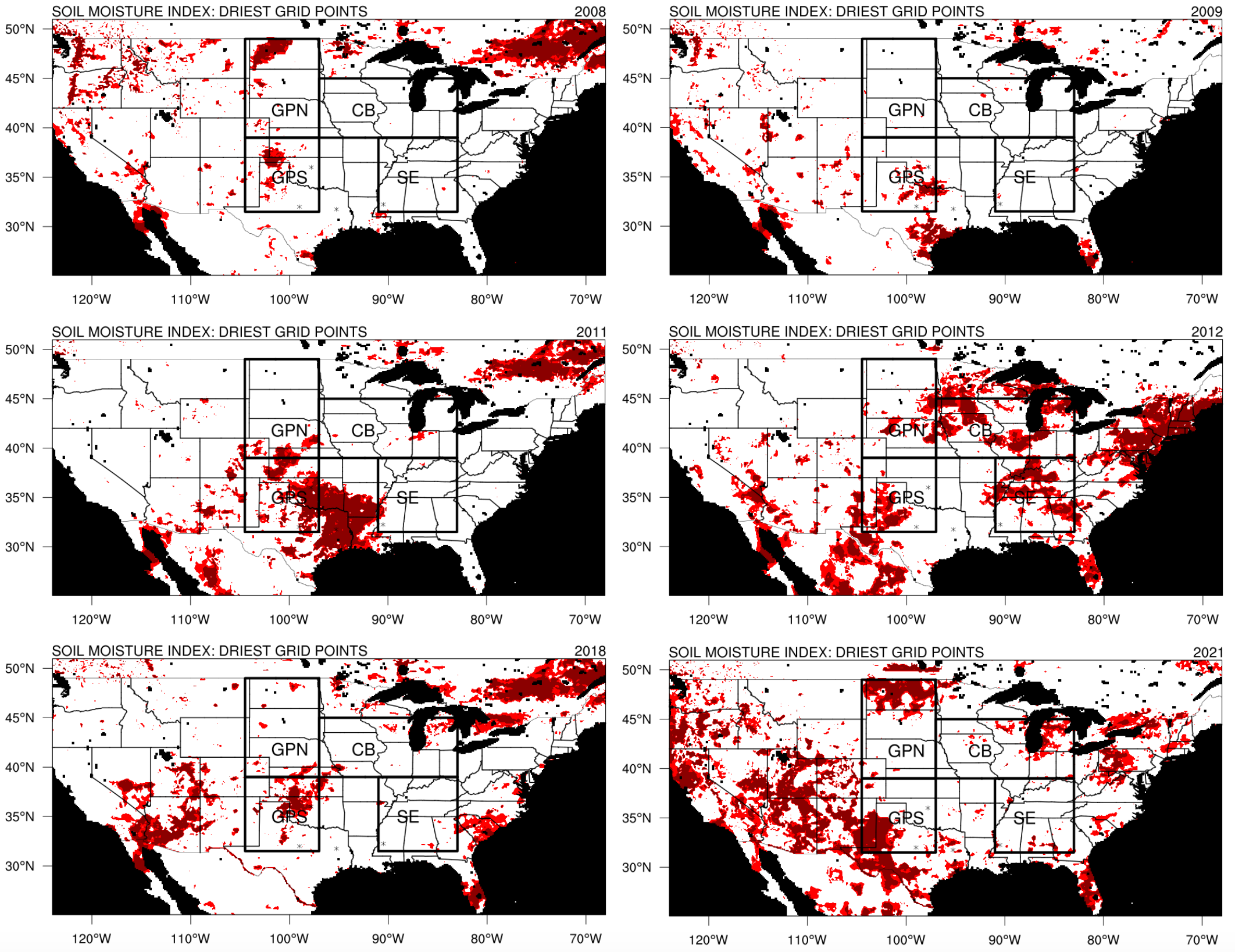 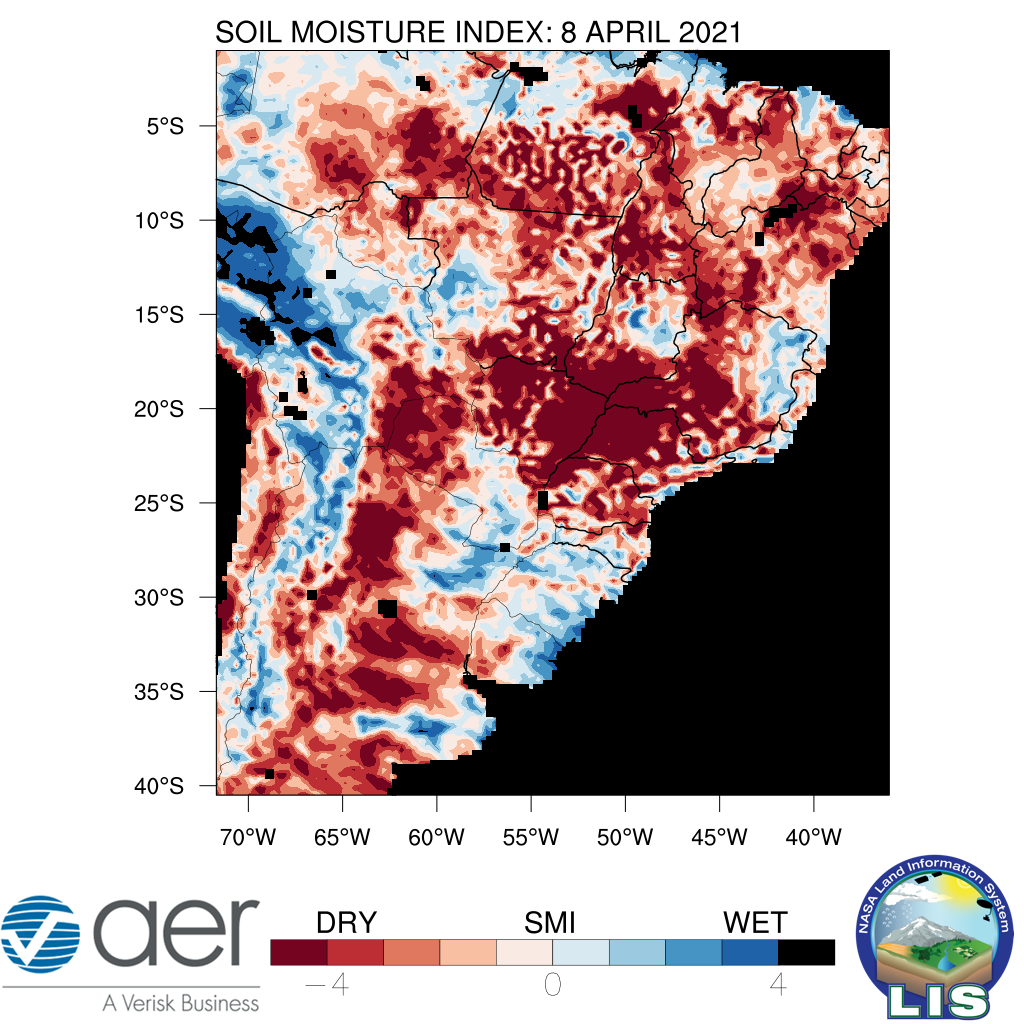 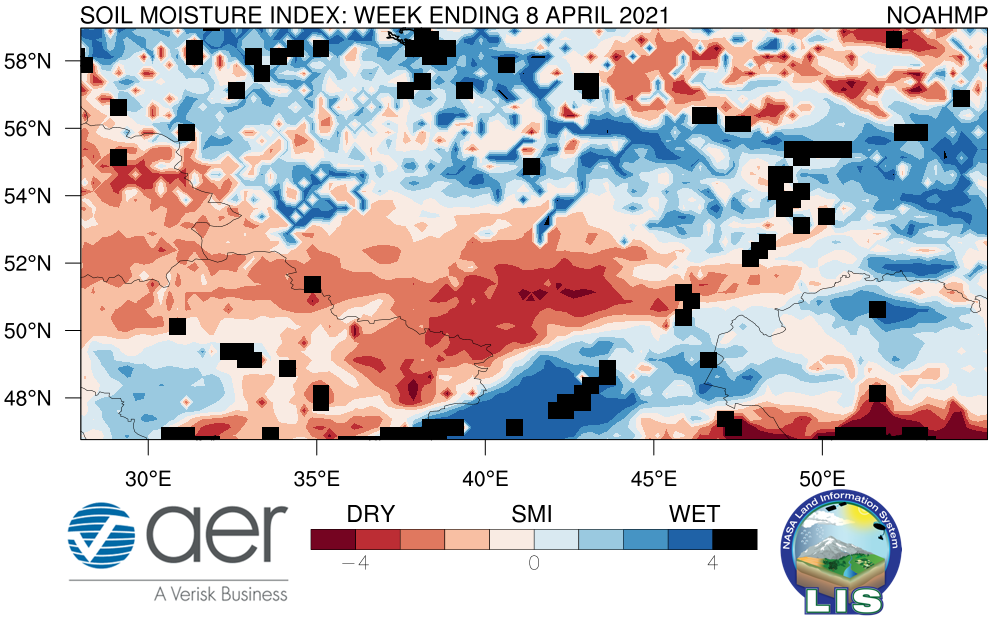