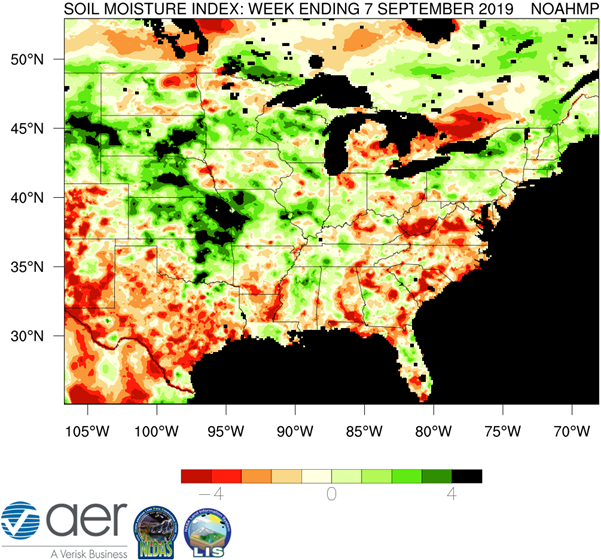 Figure 1. The Soil Moisture Index (SMI) for the 7-day period ending 7 September 2019. Results are based on output from the 0-1 m (surface to 3.23 feet) layers in the Noah-Multiparameterization (Noah-MP) land surface model. Noah-MP is run in the NASA Land Information System (LIS) framework with the North American Land Data Assimilation Version 2 (NLDAS-2) forcing dataset. The SMI calculation is based on the soil moisture index created in Hunt et al. (2009) such that ‘5’(dark green) is the wettest and ‘-5’ (dark red) the driest for the period of record.  The period of record used calculate the SMI for the current map is 1979-present. 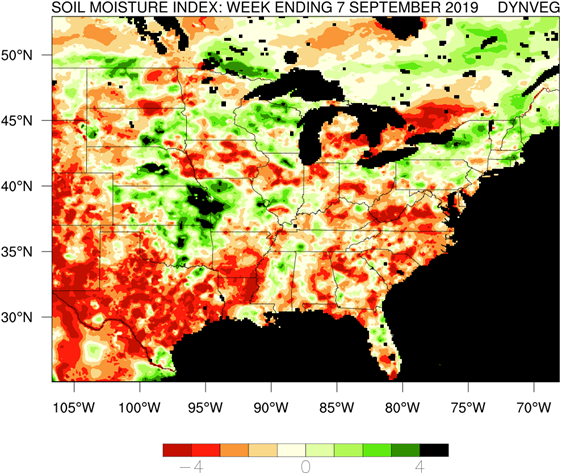 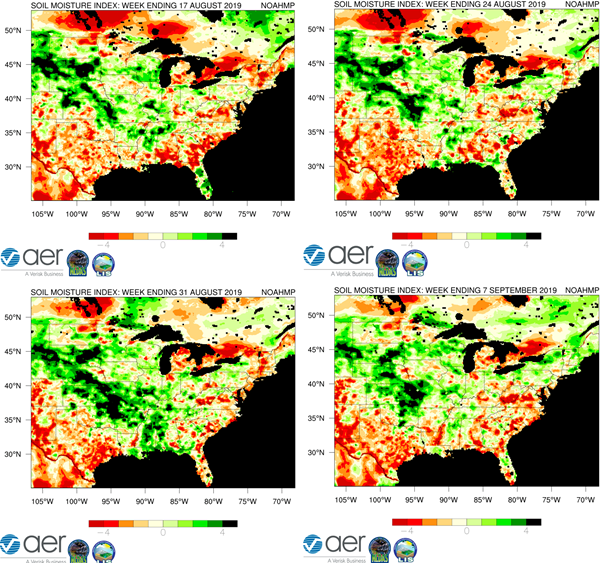 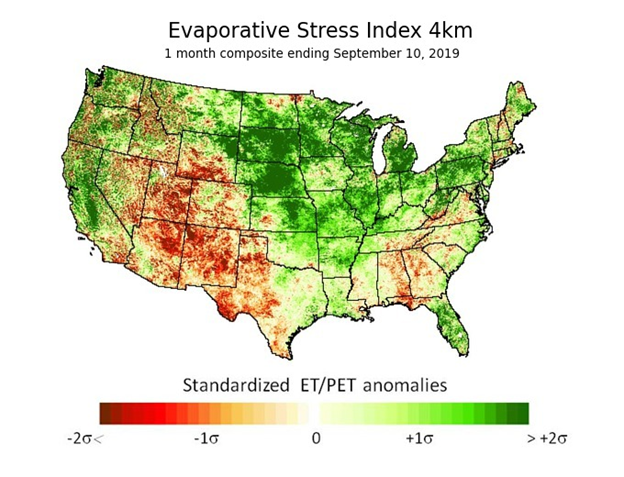 I’m back at it after a week of vacation and there were some changes to note. First, the trend toward improvement continued across central OK and central KS, with much of this occurring in the last week of August. This shows up as improvement on the latest Drought Monitor. There was also improvement in New England and some mild improvements over parts of the Central Corn Belt.

Some things didn’t change much. The most obvious is the continued wet summer and early fall across much of the Great Plains region, with much of Kansas, Nebraska and South Dakota remaining abnormally moist according to the SMI. The ESI also shows abnormally wet conditions with widespread, significant positive values. As noted by yesterday’s precipitation totals on the Nebraska Mesonet and the 7-day precipitation maps from the High Plains Regional Climate Center, this trend isn’t going away anytime soon. There was some improvement in late August over parts of the southern U.S., but this was offset by abnormally warm temperatures and lack of rain last week.

While the flash drought was eradicated over the central section of Oklahoma, further to the south in Texas (and to the west in Oklahoma), the drought remains and think the northern half of Louisiana, southern Arkansas, and Mississippi are worth watching carefully for further degradation over the next few weeks. As has been the case since June, the dynamic vegetation simulations is more aggressive on the negative anomalies and has been a useful early warning tool for flash drought for a lot of the U.S. this summer.

I also want to note that the SMI was not reflective of Hurricane Dorian rainfall over coastal sections of South Carolina and North Carolina. My suspicion is there is some initial NLDAS gauge data that haven’t been completely QC’d for release, but am hopeful the next map will reflect the changes there.

Finally, the latest USDA WASDE report shows that our forecast last month was very close to the current estimates for corn yield and production. There’s still some season to go (i.e., those numbers aren’t set in stone just yet) and the percent of corn at maturity as of Week 36 (last week) is behind normal (Fig. 5) . However, in none of the five most productive states is that number the lowest over the past ~40 years and with the continued warm weather across the region, I think it is likely we will see the vast majority of corn make it  to maturity this season. Note that 2008 and 2009 were behind 2019 in the ‘I’ states and Nebraska. 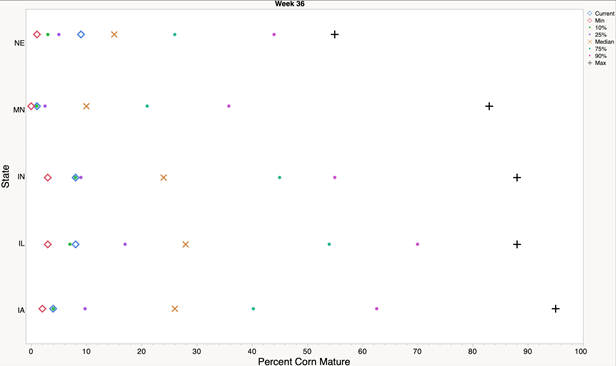 Figure 5. Percent of corn mature at week 36 going back to 1981. The current percentage is listed by the blue diamonds. Refer to the legend in the upper right for the other statistics.