During the 2020 growing season, Eric Hunt of Atmospheric and Environmental Research, Inc. will be providing weekly updates of the soil moisture index (SMI) from the Noah-MP land surface model in the NASA LIS framework for the entire U.S. and regional analysis of the SMI over the four regions of U.S. where the majority of corn, soybean, wheat, and cotton production occurs. The analysis is intended to provide the larger agricultural and meteorological communities insight as to areas where soil moisture is excessive or deficient compared to average for that location and what that may mean for impacts. It is my goal that these maps can be an early warning signal for flash drought development or where flash flooding could be likely in the coming week if heavy precipitation materializes. Please be advised that the SMI should be viewed as complementary, not a substitute, to the U.S. Drought Monitor (USDM) and that declarations of drought or flash flood potential for a particular location should never be based on the SMI alone. Remote sensing-based products such as The Evaporative Stress Index (ESI) are also included in our analysis (when available) as are various other maps that help give insight into current conditions across the U.S.

There were no significant changes in the SMI across most of the U.S. and the driest regions of the U.S. continue to be the central and southern Great Plains, the western Corn Belt, and the northeastern U.S. (Figures 1-3; Table 1). Since last Thursday several locations that needed rainfall to stop or slow down flash drought development include the eastern 2/3 of Oklahoma (Fig. 4) and over parts of Illinois and Indiana where crops probably needed a good drink. The expected upcoming heat in the southern Great Plains will help deplete that water relatively quickly but the moisture should lead to some improvement in the upcoming U.S. Drought Monitor. Just as an observation, it seems that models have been struggling with convection over the central U.S. this summer (even at relatively short forecast time scales), which may be an indication that land-atmosphere coupling is playing an important (and somewhat undetected) role. A couple of recent articles from Santanello et al. (2018) and Wakefield et al. (2019) may help provide some answers to that question. In any event, the area of the Southern Plains with an SMI below -3.0 did drop a bit last week to 24.8 percent and would expect more reductions for next week’s blog.

Further to the north, the SMI was pretty low across much of Nebraska and the western half of Iowa. The ESI (Fig. 5), VegDRI (Fig. 6), and QuickDRI (Fig. 7) are in reasonable agreement with the lower SMI values. There is some good news though. First, remember that the SMI doesn’t account for much deeper soil profile moisture and sometimes isn’t very responsive to modest rainfalls of 0.25-0.50” (6-12 mm), even though routine rainfall amounts in that range can be all crops need if they are in good soil and extreme heat is avoided, which has been the case so far this season. Second, QuickDRI is only strongly negative across northeastern Colorado with smaller pockets of concern in Iowa and Illinois. The pattern over the next few weeks historically has favored those areas in the ‘I’ states picking up some moisture. Finally, it is my opinion that markets tend to overestimate the impact of dryness in Iowa. But this area still needs to be watched carefully as any extended stretch of heat will start knocking down yield. My general advice to any commodity traders reading this is to keep paying attention to this area but not to overreact to the poorer indicators on the maps. I discuss the corn yield forecast a little more in the Crop Summary section.

Further north, things have turned around nicely in the northern section of the Great Plains, with much of North Dakota having pretty moist soils now. This combined with moderate temperatures should be beneficial to the spring wheat crop, which is now flowering. There is definitely still some season to go but the timing of the return of rain for that region could not have come at a better time. The southeast continues to be the wettest region of the U.S, though there are isolated pockets where the SMI is less than -3.0. The SMI remained reasonably consistent across the western U.S. and northeastern U.S., with negative values of the SMI remaining dominant from Pennsylvania to Vermont. 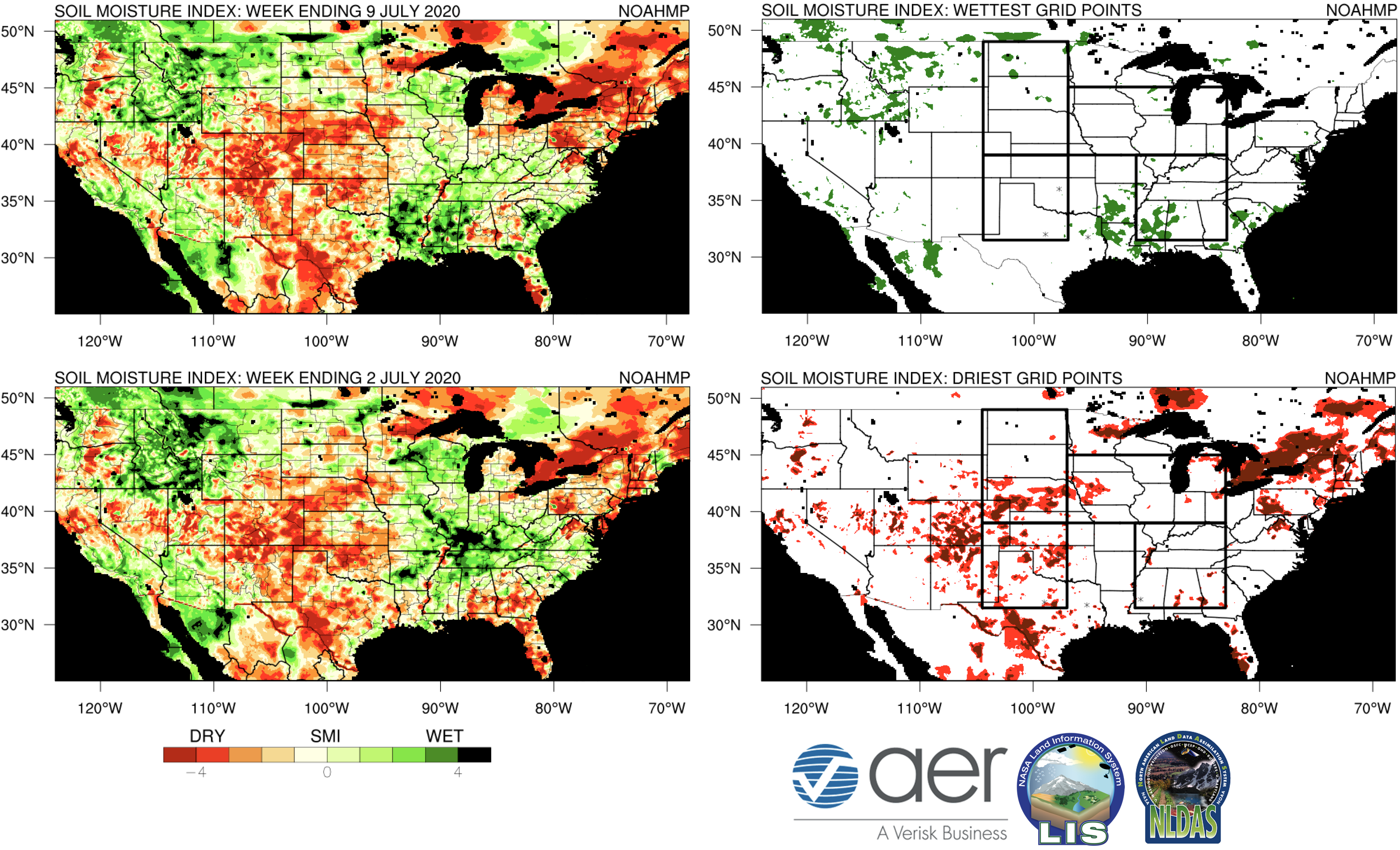 Figure 1. The Soil Moisture Index (SMI) for the 7-day period ending 9 July 2020 (top left) and 2 July 2020 (bottom left). On the right-hand side are the grid points where the SMI is at or above 3.0 (top right, green) and grid points where the SMI is at or below 3.0 (bottom right, red).  Results are based on output from the 0-1 m (surface to 3.23 feet) layers in the Noah-Multiparameterization (Noah-MP) land surface model. Noah-MP is run in the NASA Land Information System (LIS) framework with the North American Land Data Assimilation Version 2 (NLDAS-2) forcing dataset. The SMI calculation is based on the soil moisture index created in Hunt et al. (2009) such that ‘5’(dark green) is the wettest and ‘-5’ (dark red) the driest for the period of record.  The period of record used calculate the SMI for the current map is 1979-present. 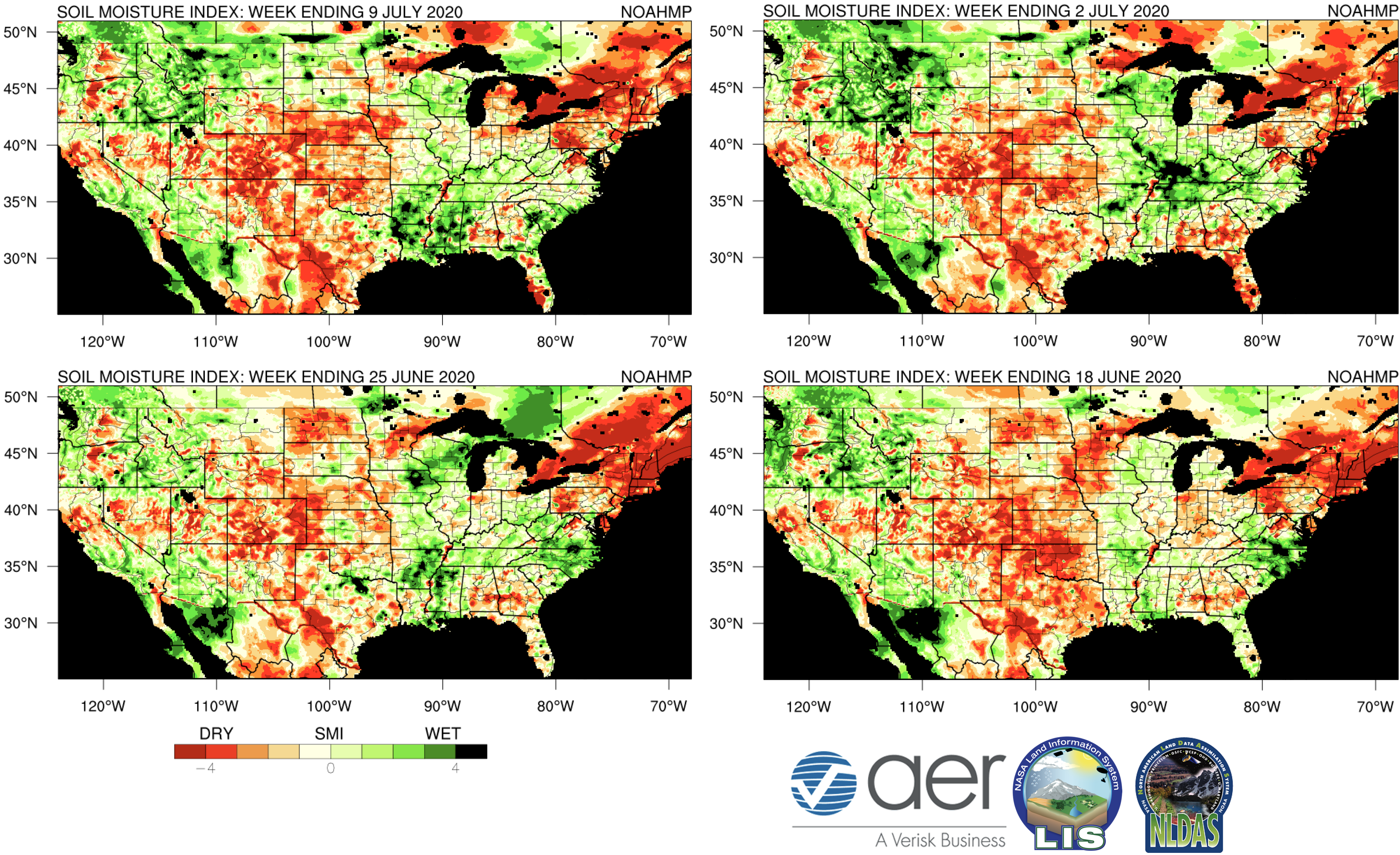 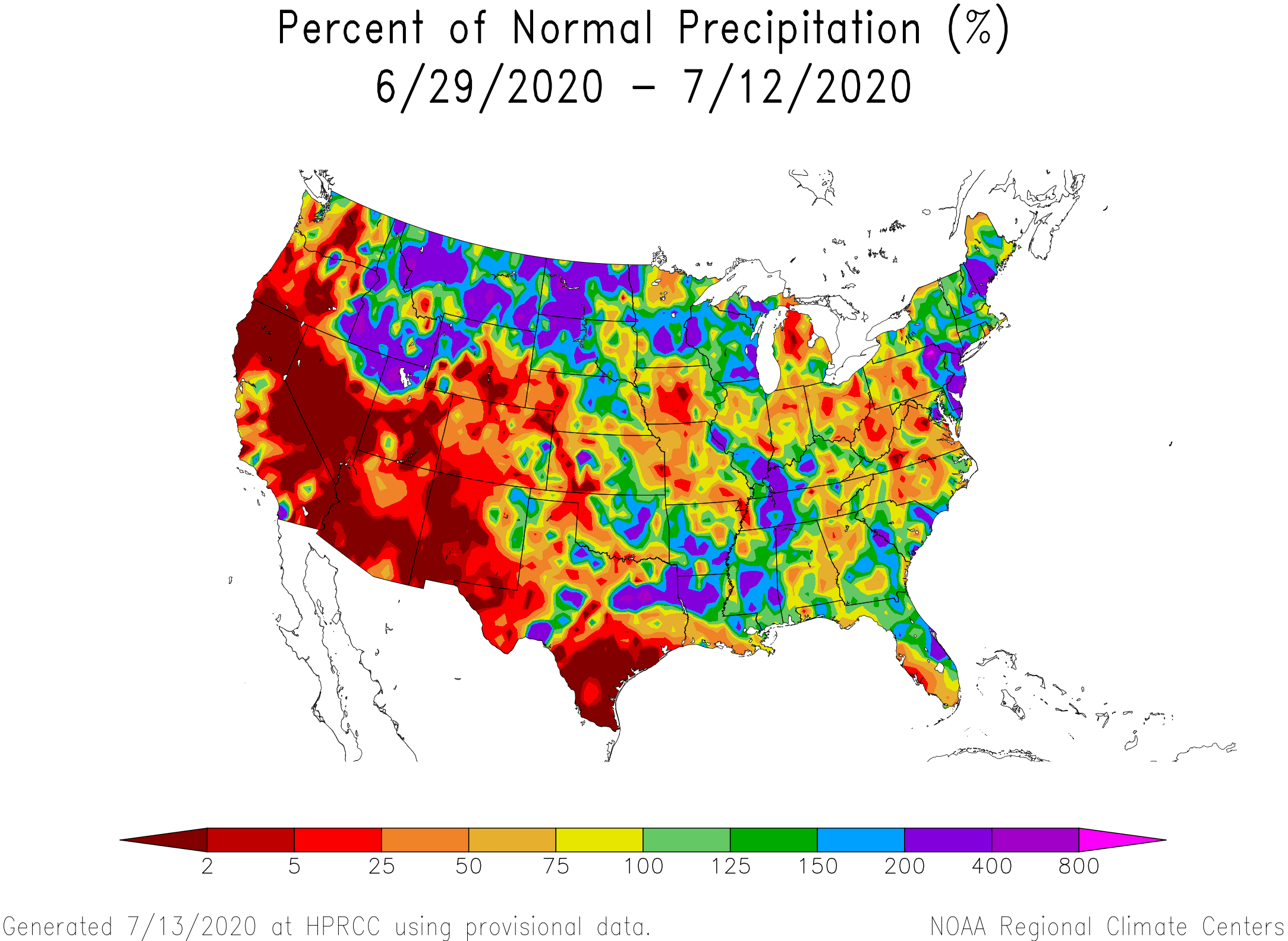 Figure 4. Percent of normal precipitation over the past 14 days (through Sunday 12 July).  Map courtesy of the High Plains Regional Climate Center. 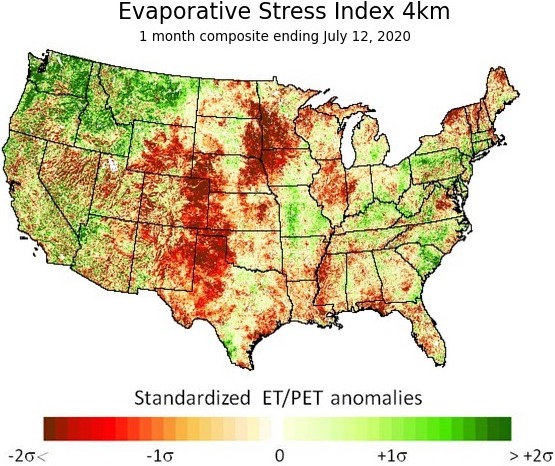 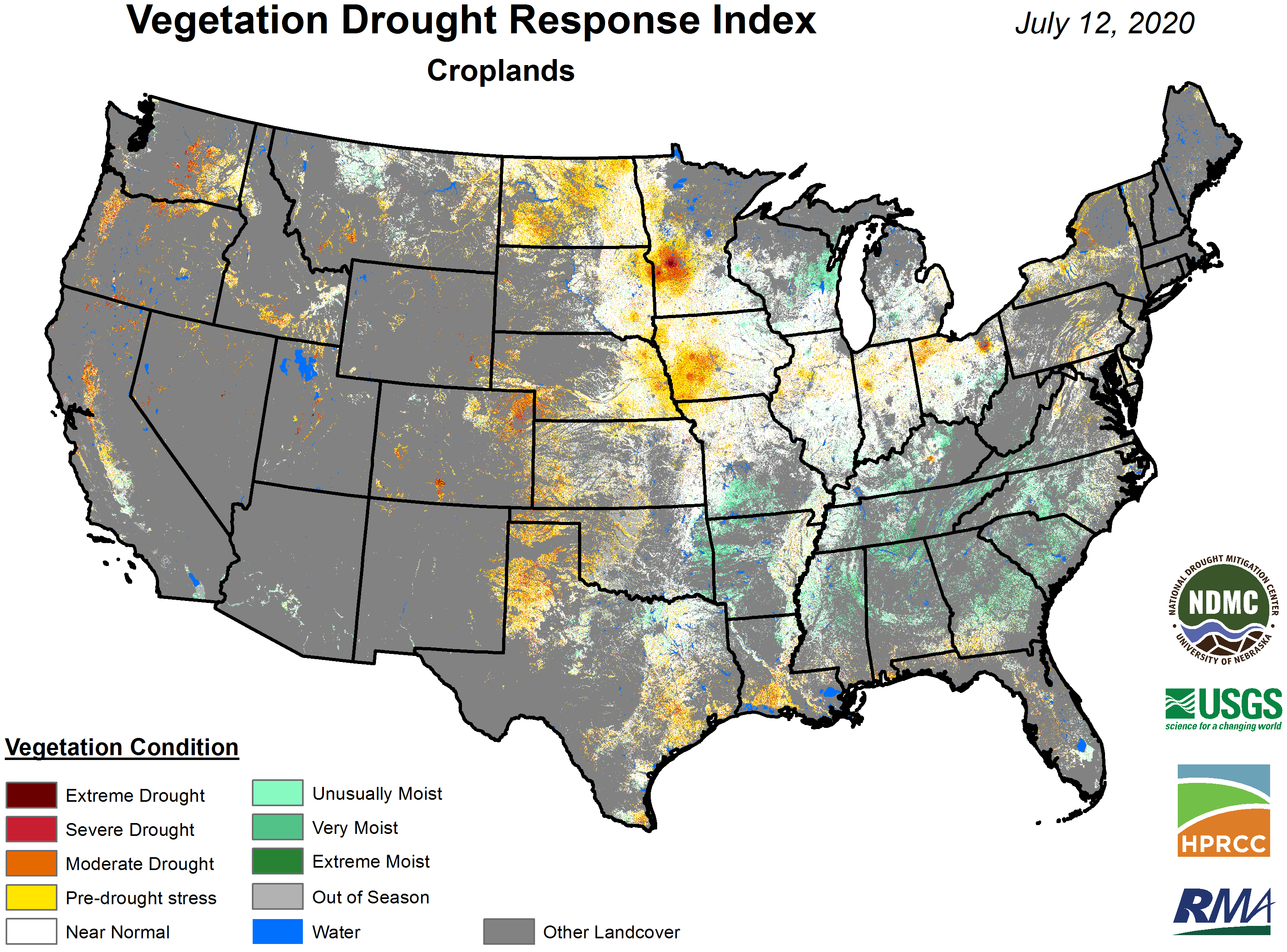 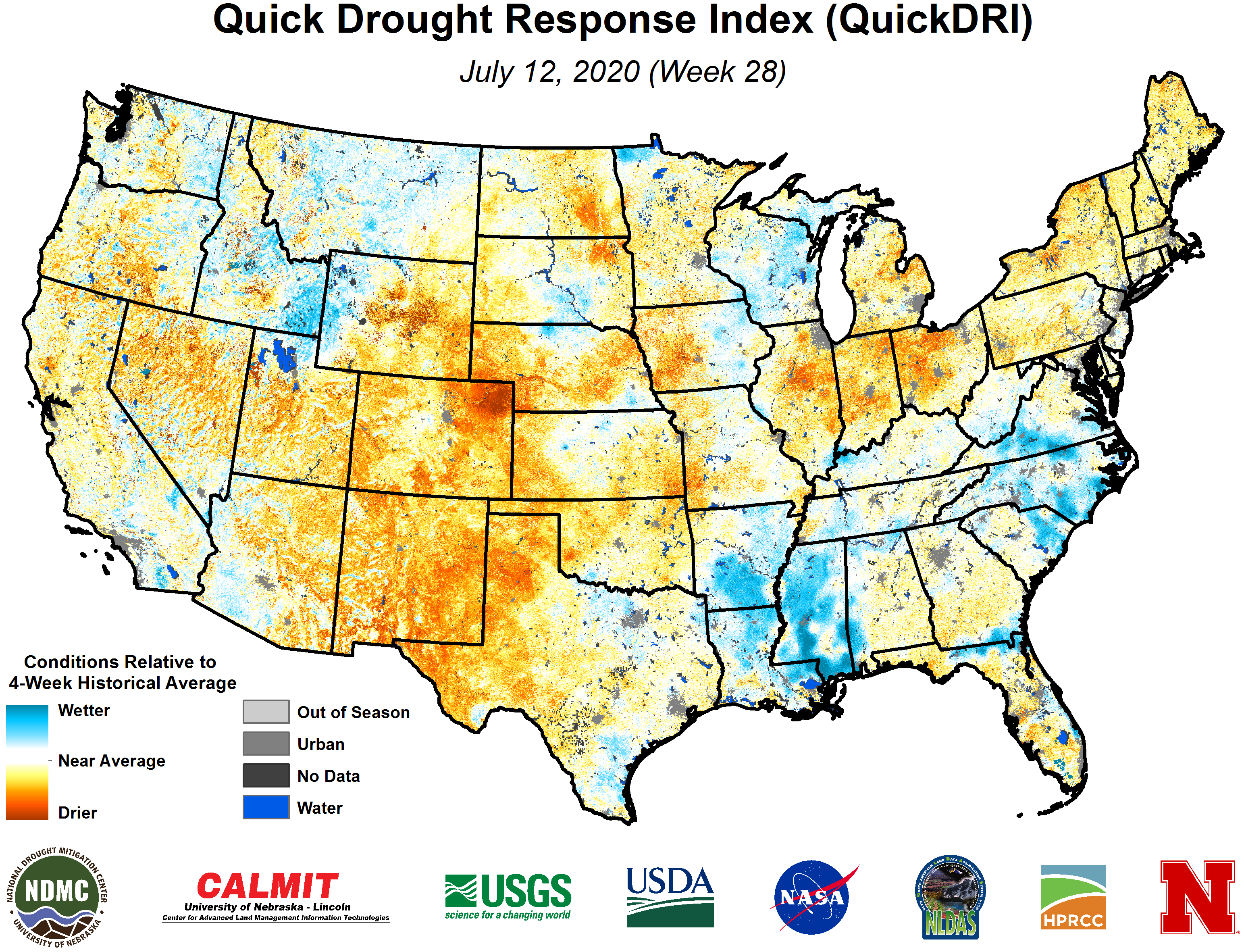 According to the latest Crop Progress Report, U.S. corn is currently rated at 69 percent Excellent/Good (E/G) against 8 percent Poor/Very Poor (P/VP), another slight decline over the previous week. However this rating by itself is still suggestive of above trend corn. Figure 8 shows that the median SMI of the Corn Belt dropped to -0.6 but continues to be in the same range as 2016-2018. Corn pollination is well under-way in the southern U.S. and is coming along nicely in parts of the Corn Belt. Soybean condition numbers declined a bit from last week, now at 68 and 5 percent respectively. The winter wheat harvest is essentially complete in Kansas and good progress continues to be outside the main winter wheat belt. 80 percent of the spring wheat has headed in the northern U.S. and 68 percent of it is E/G, a slight decline from last week. Cotton conditions continue to be mostly in good to fair condition, with the highest P/VP numbers coming out of Texas. Best cotton conditions are currently found in Alabama and Louisiana. 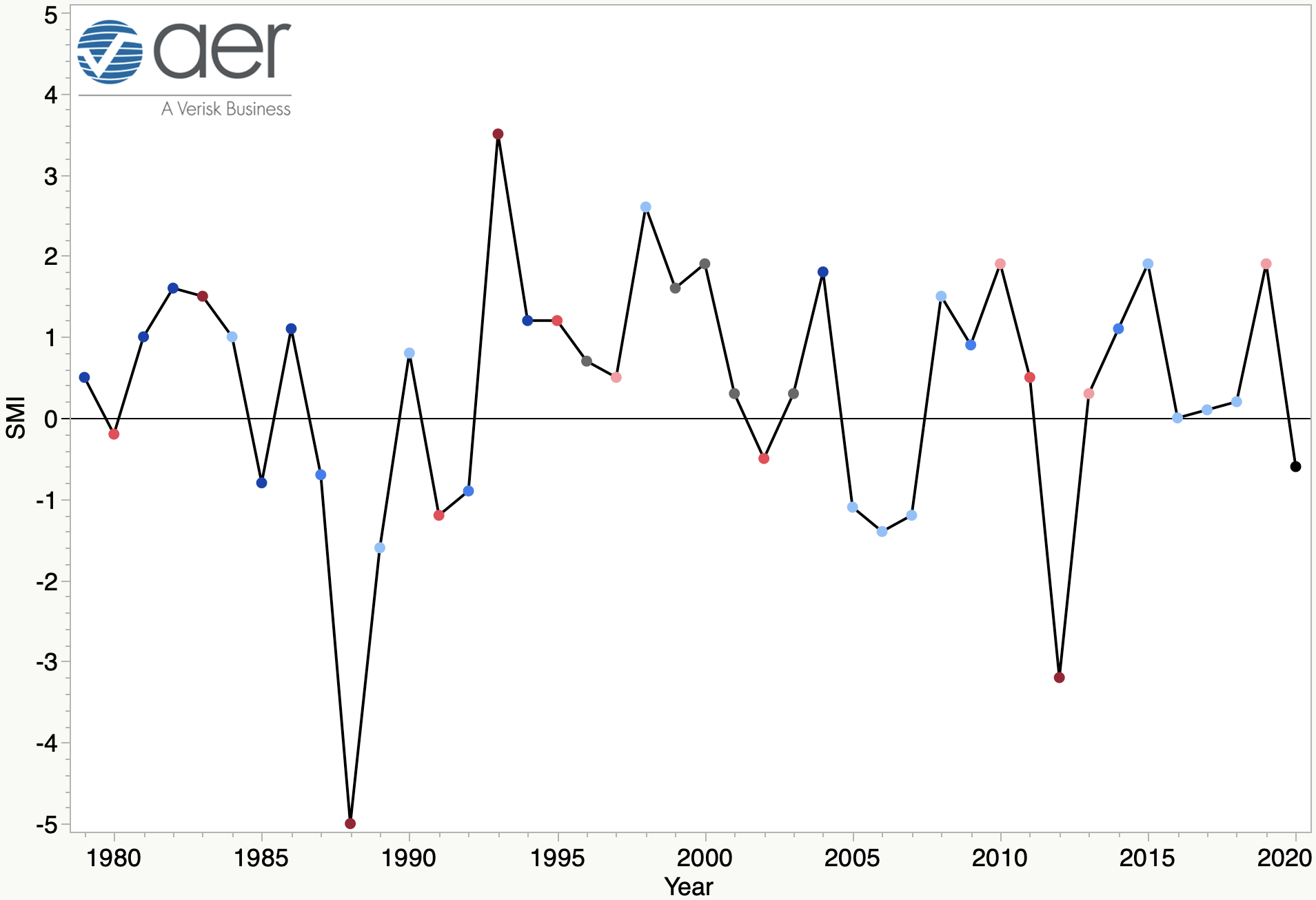 The corn yield forecast has improved slightly over two weeks ago, with a slight narrowing on both the high and low end. Note that while above trend is the expectation, an August with a lot of nights into the 70’s for lows and more areas in drought could spell yields going down to the 175-177 range. For now though the forecast looks good enough to produce corn in the trend range of 2016-2018, which would translate this year into about 184-186 bpa. Still think anything over 190 is unlikely but pay close to attention to where the ridge sets up into August. If it moves further west toward the coast, then the Corn Belt would be well positioned for a cooler August and hence a longer grain filling period. If average temperatures in August are in the 70-72F range over the Corn Belt, don’t be shocked if the year produces over 190 bpa. 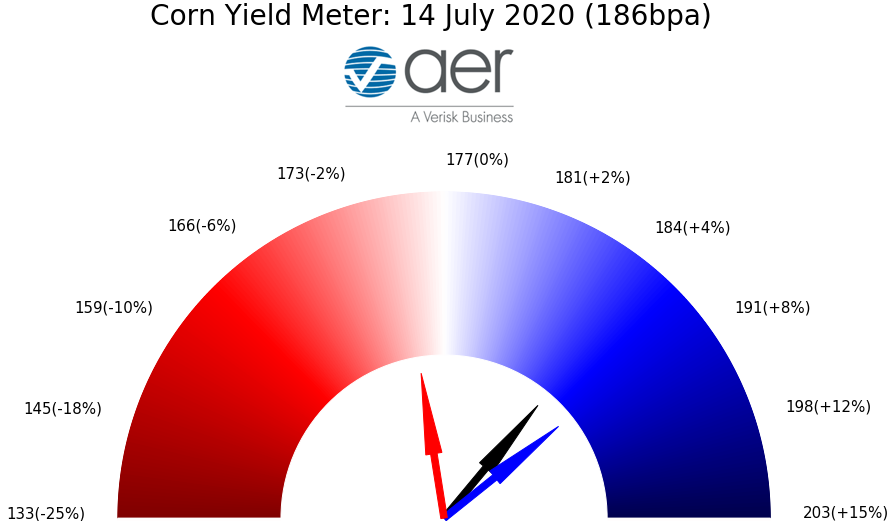