During the 2020 growing season, Dr. Eric Hunt of Atmospheric and Environmental Research, Inc. will be providing weekly updates of the soil moisture index (SMI) from the Noah-MP land surface model in the NASA LIS framework for the entire U.S. and regional analysis over the Corn Belt in the north central U.S. where the majority of corn and soybean production occurs. The analysis is intended to provide the larger agricultural and meteorological communities insight as to areas where soil moisture is excessive or deficient compared to average for that location and what that may mean for impacts. It is my goal that these maps can be an early warning signal for flash drought development or where flash flooding could be likely in the coming week if heavy precipitation materializes. Please be advised that the SMI should be viewed as complementary, not a substitute, to the U.S. Drought Monitor (USDM) and that declarations of drought or flash flood potential for a particular location should never be based on the SMI alone. The Evaporative Stress Index (ESI) is also included in our analysis as are various other maps that help give insight into current conditions across the U.S.

Trends from the previous week continued into the first half of last week with further drying of root zone soil moisture in the western and northern section of the Corn Belt. Figure 1 (below) is valid as of last Thursday morning so the significant precipitation that occurred over portions of the Midwest is not yet reflected. Next week’s map will definitely look different. Nevertheless, the areas where the SMI is strongly negative matches up well with the latest U.S. Drought Monitor (Fig. 2), with drought intensifying across the central High Plains and in the Pacific Northwest into central California. Pockets of strongly negative SMI values have persisted across the Gulf Coast for most of the spring. The adjacent areas to the north (that improved some in April) will need to be watched carefully over the next few weeks. The western Corn Belt is not in drought yet but if rain does not materialize over a more widespread area than over this past weekend, my guess is moderate drought will be on the map after Memorial Day. 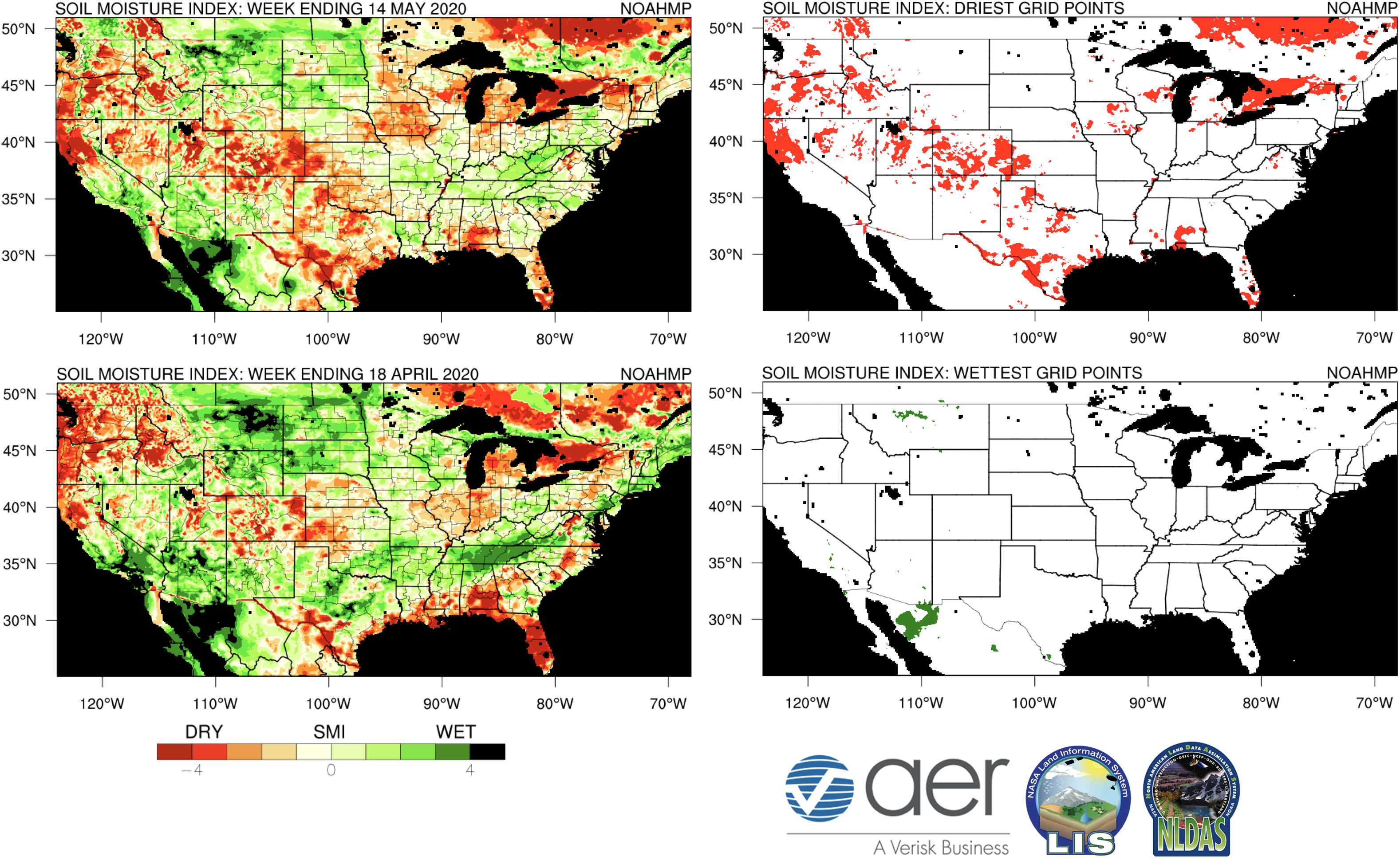 Figure 1. The Soil Moisture Index (SMI) for the 7-day period ending 14 May 2020 (top left) and 18 April 2020 (bottom left). On the right-hand side are the grid points where the SMI is at or below -4.0 (top right, red) and grid points where the SMI is at or above 4.0 (top right, green).  Results are based on output from the 0-1 m (surface to 3.23 feet) layers in the Noah-Multiparameterization (Noah-MP) land surface model. Noah-MP is run in the NASA Land Information System (LIS) framework with the North American Land Data Assimilation Version 2 (NLDAS-2) forcing dataset. The SMI calculation is based on the soil moisture index created in Hunt et al. (2009) such that ‘5’(dark green) is the wettest and ‘-5’ (dark red) the driest for the period of record.  The period of record used calculate the SMI for the current map is 1979-present. 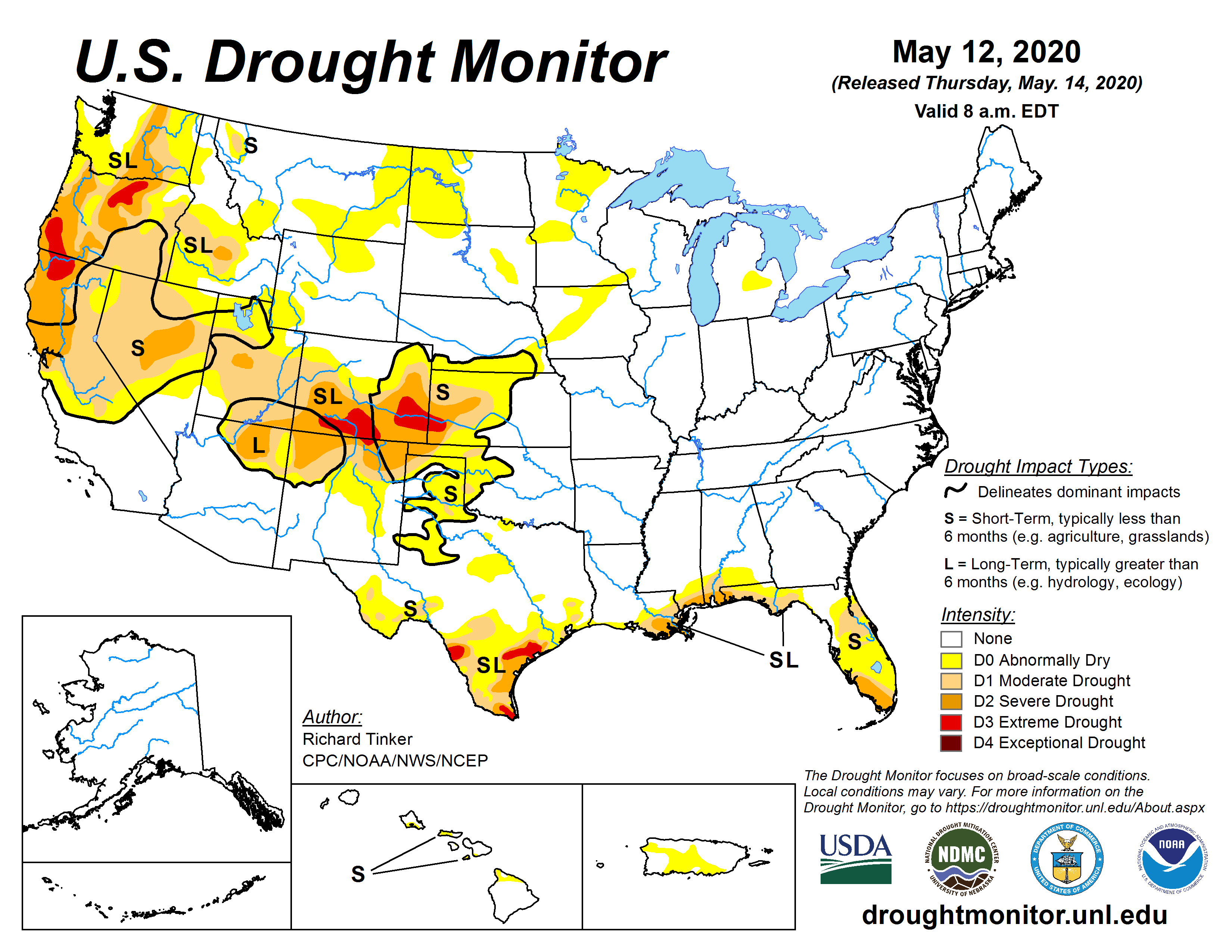 The recent rains from the weekend are captured better in Figure 3 which shows a specialized version of NASA LIS (also used in Figure 1) and the model run with data assimilation of NASA Soil Moisture Active Passive (SMAP). For additional details on the plots shown in Figure 3, please visit the Real-Time LIS page. But the maps do reflect the heavy precipitation associated with this weekend’s slower moving storm system that soaked parts of the south central and midwestern U.S. Note that the SMAP assimilated run (right)  is more aggressive with drier soils across the southeastern U.S. than either the SPoRT LIS run (left) or the SMI plot in Figure 1. That is a signal that the top portion of the soil profile in that area is getting quite dry and further soil moisture depletion is likely if the next week doesn’t bring much precipitation.

The last several weeks have generally been on the dry side across the western and northern Corn Belt with most locations having SMI values under 0 and in parts of Iowa, Minnesota, and Nebraska, the SMI has fallen below -3.0 (Figure 4; Table 1). The median SMI values are less than 0.0 across in all regions except the southern region, though this will almost assuredly not be the case in next week’s Ag Blog. As of now, the dryness in the western Corn Belt is not alarming. The upcoming pattern is favorable for precipitation, possibly significant precipitation, across the region this weekend and the sub-seasonal to seasonal forecast is not favorable for a significant flash drought. However, the area is worth monitoring because the recent dryness will be much more problematic if this goes on a few more weeks. If that happens, we could end up with a situation like 2018 where most of the central and north central U.S. were adequately moist, except across the Highway 36-Interstate 70 corridor in northern Kansas and northern Missouri. 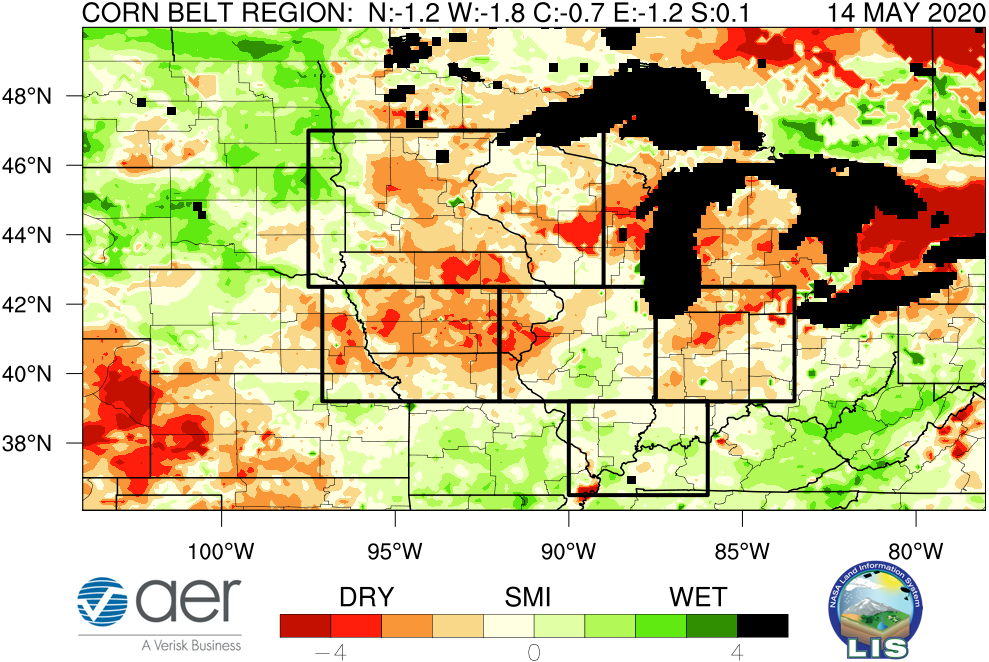 Figure 4.  Analysis of the SMI by region of the Corn Belt. The median SMI values for each region are located above. Regions are as follows: N (Northern), W (Western), C (Central), E (Eastern), S (Southern). The majority of U.S. corn production is from these regions and the regions were set to avoid high-density areas of irrigation (e.g., central Nebraska).

Table 1. The median SMI value from the current map, last week’s map, and one year ago at this time over the five regions of the Corn Belt.

The percent of corn planted is not on a record pace but it is right at the long-term average, is above the 5-year average, and well ahead of last year’s disastrous start to the season. The same is true for soybean. Since 1980 there have been 21 other years where 80 percent or more of corn had been planted by this point in May and 15 of those (71%) finished above trend. So, a good start to the season is certainly helpful for chances of above trend corn but it is absolutely not a guarantee. Note that two of the worst years in recent history (1988, 2012) had more than 95 percent planted by this time. If you’re interested in a corn forecast, one will be available on the AER website before the holiday weekend.

Table 2. The percentage of corn and soybean that has been planted and has emerged across the U.S. according to the latest USDA Crop Progress Report compared to the 5-year average and 2019. 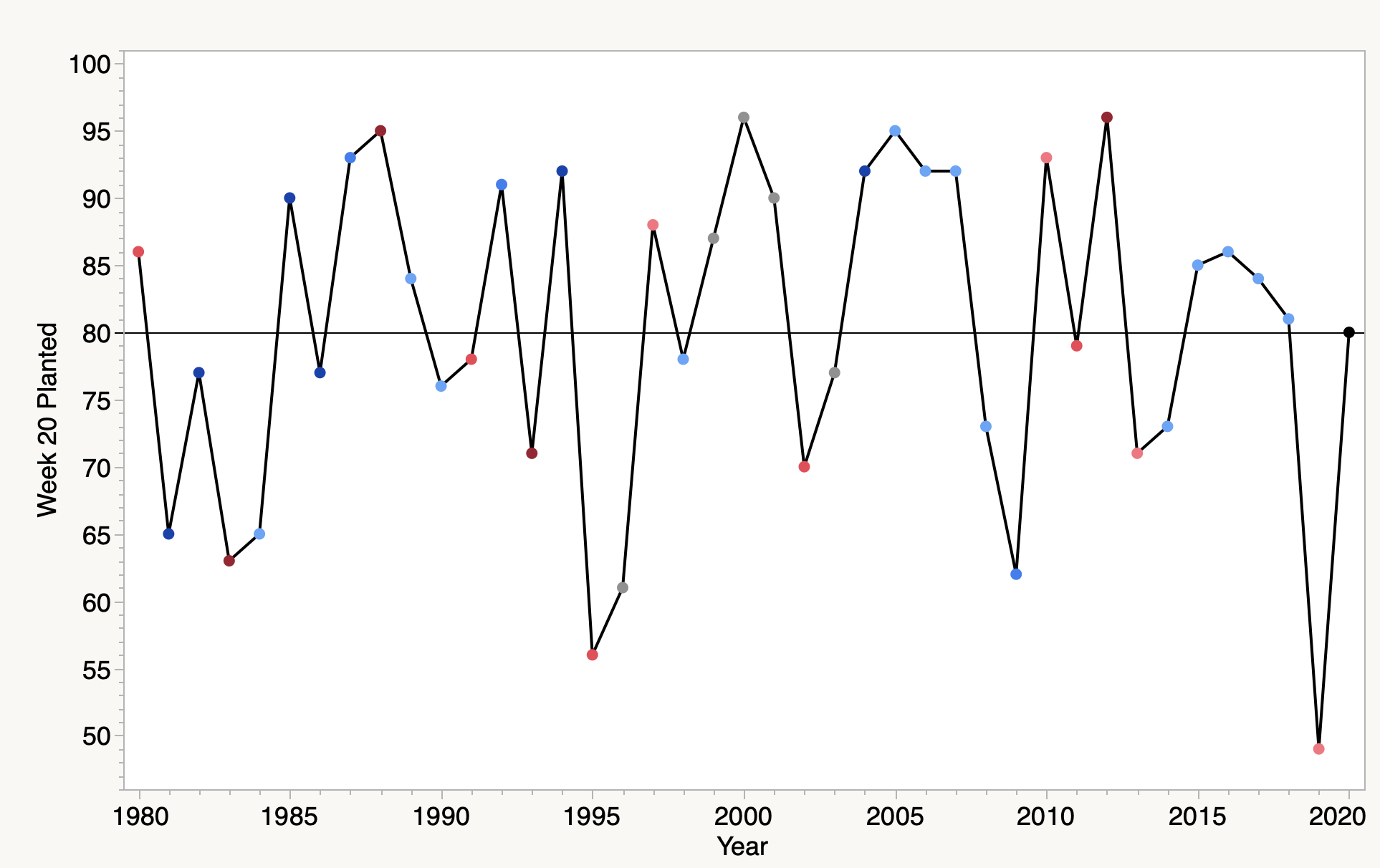 The Evaporative Stress Index (ESI; Figure 6) is not available everywhere in the U.S. yet (out of season mask indicated in white) and at this point of the season, negative values may not necessarily be indicative of drought stress on vegetation. The areas in the U.S. most worth watching as we move into June are the High Plains of eastern Colorado, Kansas, and the western panhandle of Oklahoma and into northern California and southern Oregon. The western Corn Belt will also be worth watching if this weekend doesn’t bring significant precipitation. 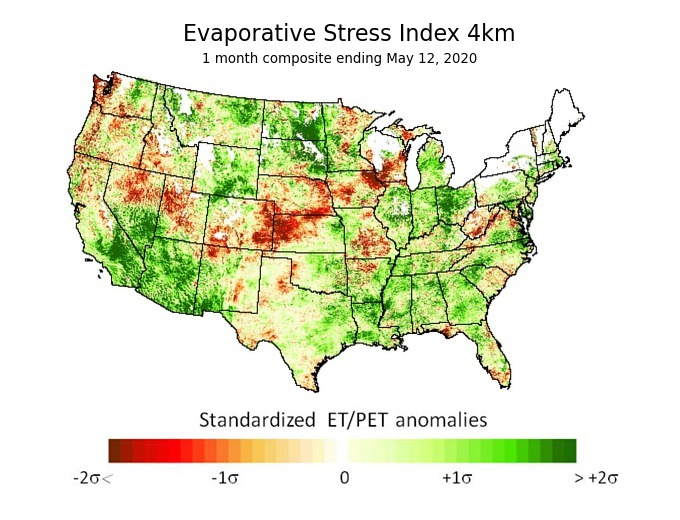