A few things stand out to me this week. First, several places saw enough moisture to push the SMI above 0.0 for the first time in weeks or even months. In particular, this is the best that most of western Kansas has been all growing season (Fig 1). Other locations that have seen notable improvements of late include the eastern half of Oklahoma, central Oklahoma, and parts of the northeastern U.S. (Figures 2 and 4). Many of these locations were in drought on the most recent U.S. Drought Monitor so additional moisture will be needed for true eradication of drought. Second, the pattern this summer has clearly not favored abundant moisture in pockets of the Corn Belt, namely western Iowa and parts of northern Indiana and Ohio (Figs. 5, 7).

In the case of western Iowa, Figure 3 shows that the SMI for that crop reporting district was comparable to southeastern Nebraska and to the eastern part of Iowa through the first part of June. Since the middle of June that district has a classic flash drought signature dropping from 2.0 to -4.0. Figure 3 shows that southeastern Nebraska essentially was following the exact same trajectory through June but since the first of July has received decent precipitation from several MCS’s that have mostly missed the west central part of Iowa. The graph also provides evidence that the middle of June was critical for western and eastern Iowa going on diverging paths. First, several days of temperatures in the 90’s and abnormally strong winds brought the SMI crashing down in west central Iowa. Thus, it appears that spell of abnormally hot and windy weather may have been the catalyst for the beginning of flash drought. This also applies across the Missouri River into northeastern Nebraska. Second, Tropical Storm Cristobal brought a good soaking to much of eastern Iowa, and it seems that they are still benefitting from that moisture.

What does this mean for crops in western Iowa? There is still some potentially good news. First, a decent rain may actually materialize in the next few days though Sunday night was yet another dud. Second, this area is generally blessed with very deep loess soils and corn there probably can handle drought better than most places on this planet. So, IF some rain does return and no extended periods of heat materialize, then above trend corn in that area is still possible. Third, both the ESI (Figure 6) and QuickDRI (Figure 8) indicate better conditions than a week ago so it’s possible the crops still have some shot at strong yields. VegDRI (Fig. 7) does show some pockets of moderate drought in western Iowa and across the river in eastern Nebraska. Elsewhere across the Corn Belt, conditions have improved for much of the prime corn growing regions in Illinois and Indiana and conditions are looking pretty good into southern Minnesota and western Wisconsin. Rainfed crops in parts of northeastern Nebraska are likely hurting in spots but the rainfed crops in southeastern Nebraska have been catching adequate rains of late.

The northeastern U.S. has generally improved over the past 3-4 weeks, though as in the central U.S., pockets of drought remain. The warm and drier weather in the mid-Atlantic region has brought down the SMI across northern Virginia and this extends northwestward into western Pennsylvania and into northern lower Michigan. The contrast between the wet U.P. of Michigan and the northern area of lower Michigan is pretty striking and interesting. Strongly negative SMI values persist across much of Texas and New Mexico and over a few pockets in southern Alabama and Georgia; most of the southeastern U.S. is currently in good shape. No specific changes to report for the western U.S. 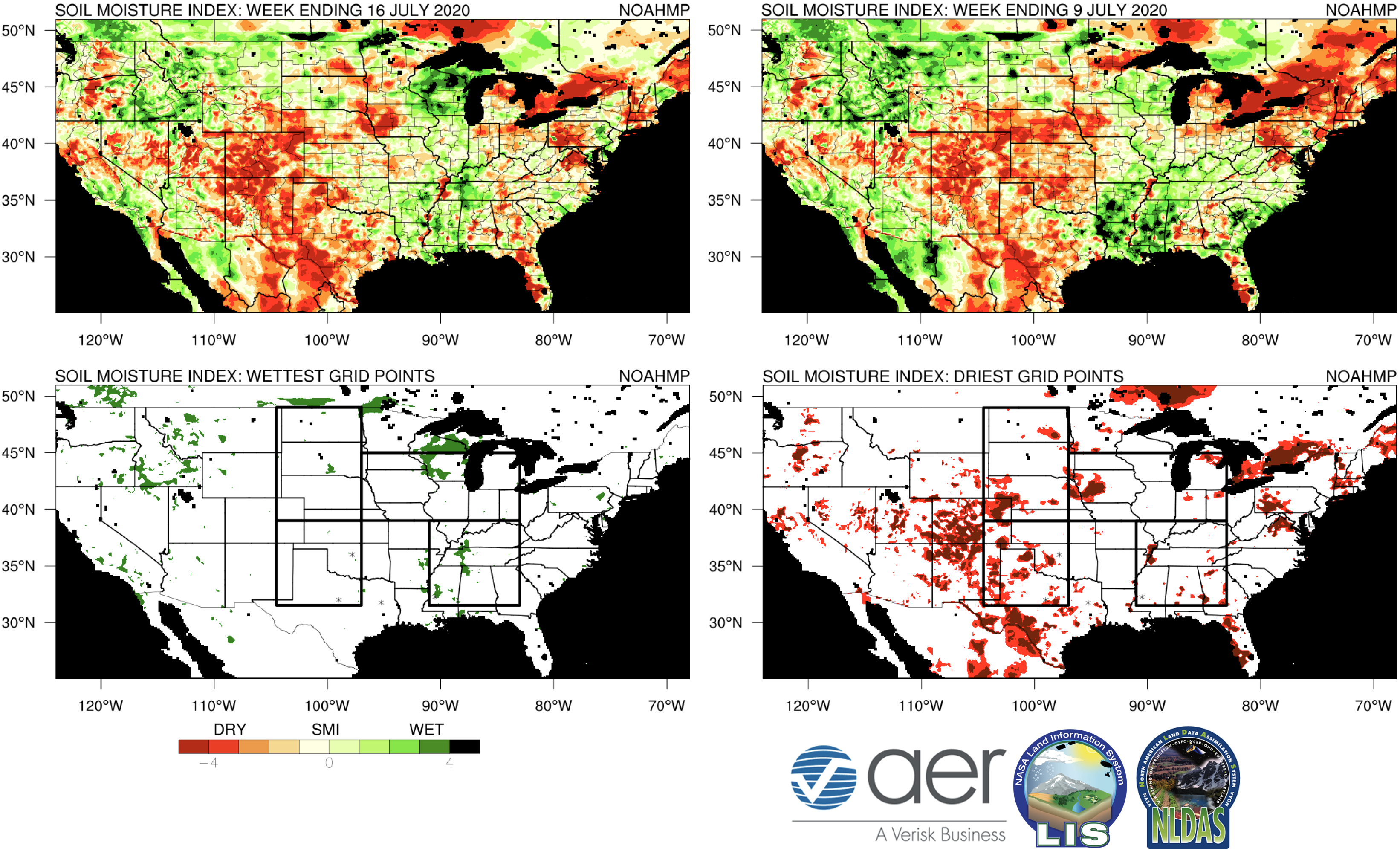 Figure 1. The Soil Moisture Index (SMI) for the 7-day period ending 16 July 2020 (top left) and 9 July 2020 (bottom left). On the right hand side are the grid points where the SMI is at or above 3.0 (top right, green) and grid points where the SMI is at or below 3.0 (bottom right, red).  Results are based on output from the 0-1 m (surface to 3.23 feet) layers in the Noah-Multiparameterization (Noah-MP) land surface model. Noah-MP is run in the NASA Land Information System (LIS) framework with the North American Land Data Assimilation Version 2 (NLDAS-2) forcing dataset. The SMI calculation is based on the soil moisture index created in Hunt et al. (2009) such that ‘5’(dark green) is the wettest and ‘-5’ (dark red) the driest for the period of record.  The period of record used calculate the SMI for the current map is 1979-present. 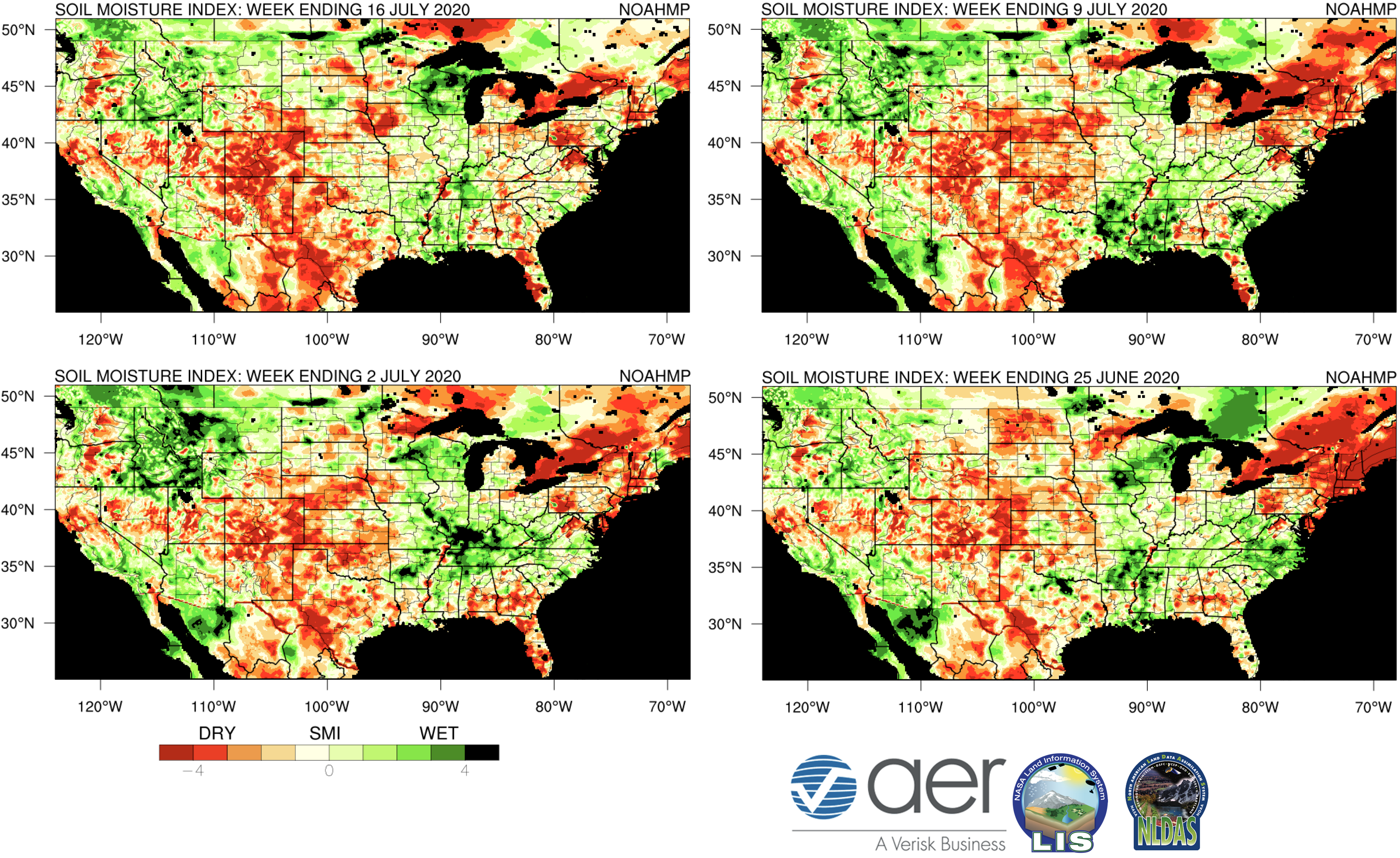 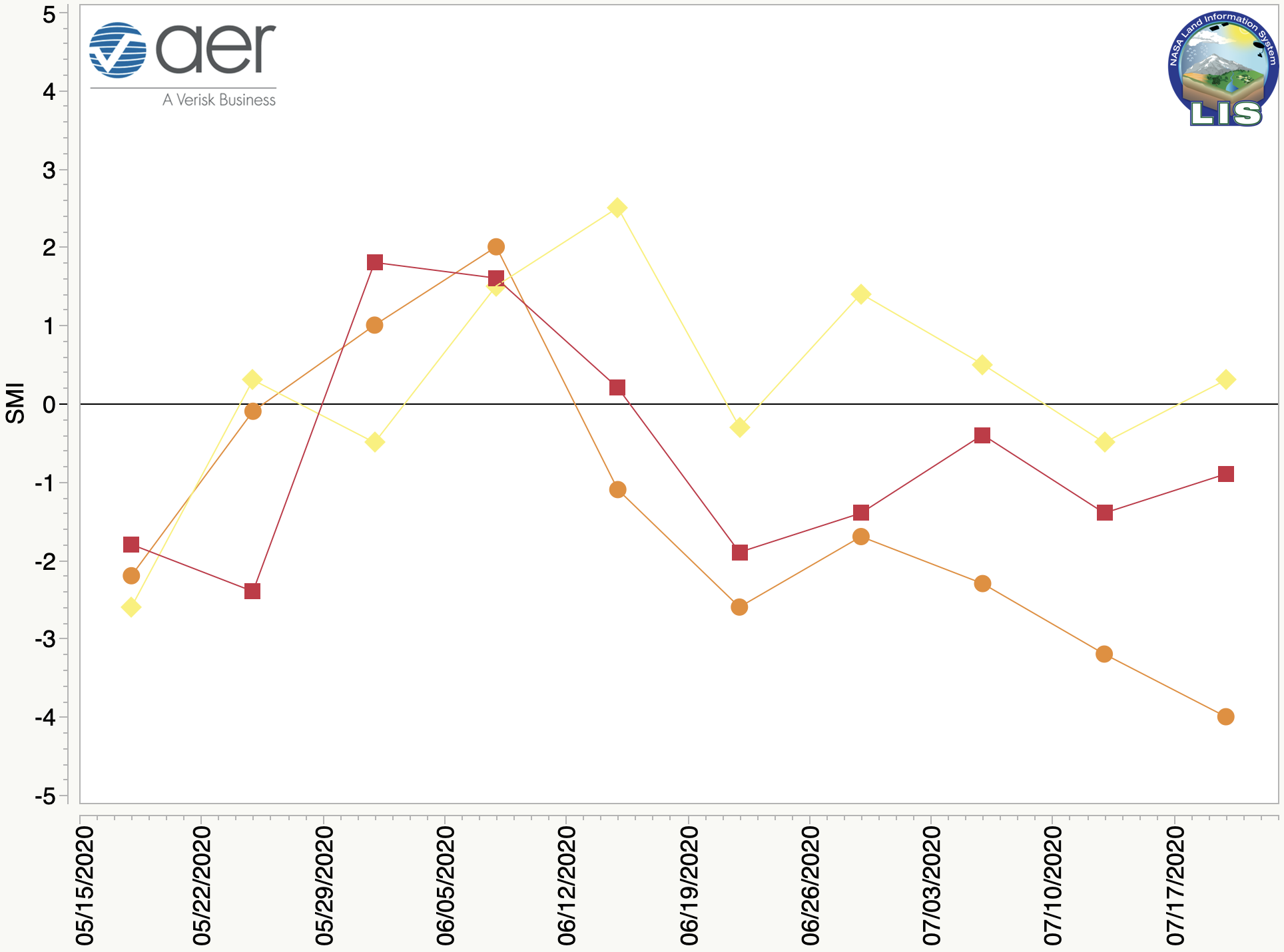 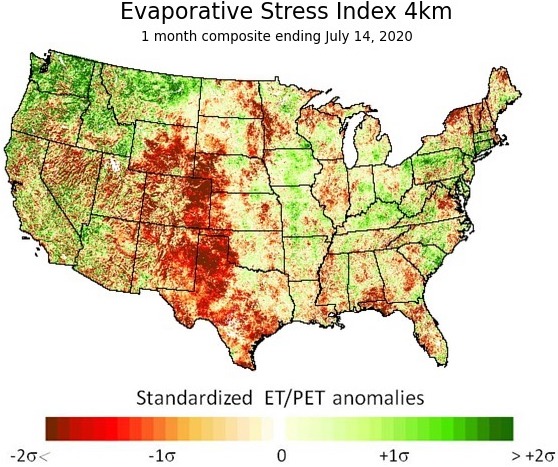 Figure 5. Percent of normal precipitation over the past 14 days (through Sunday 19 July).  Map courtesy of the High Plains Regional Climate Center. 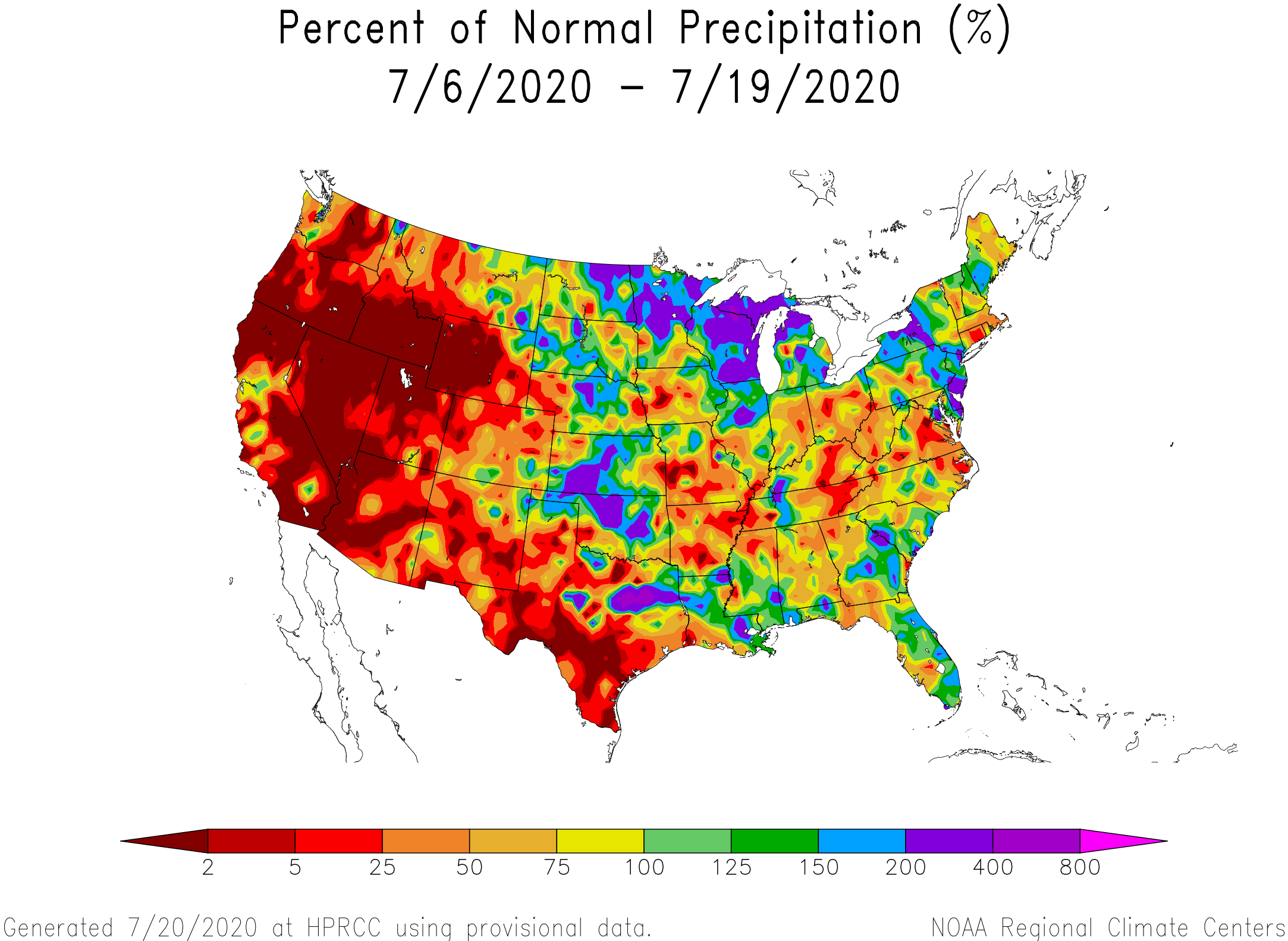 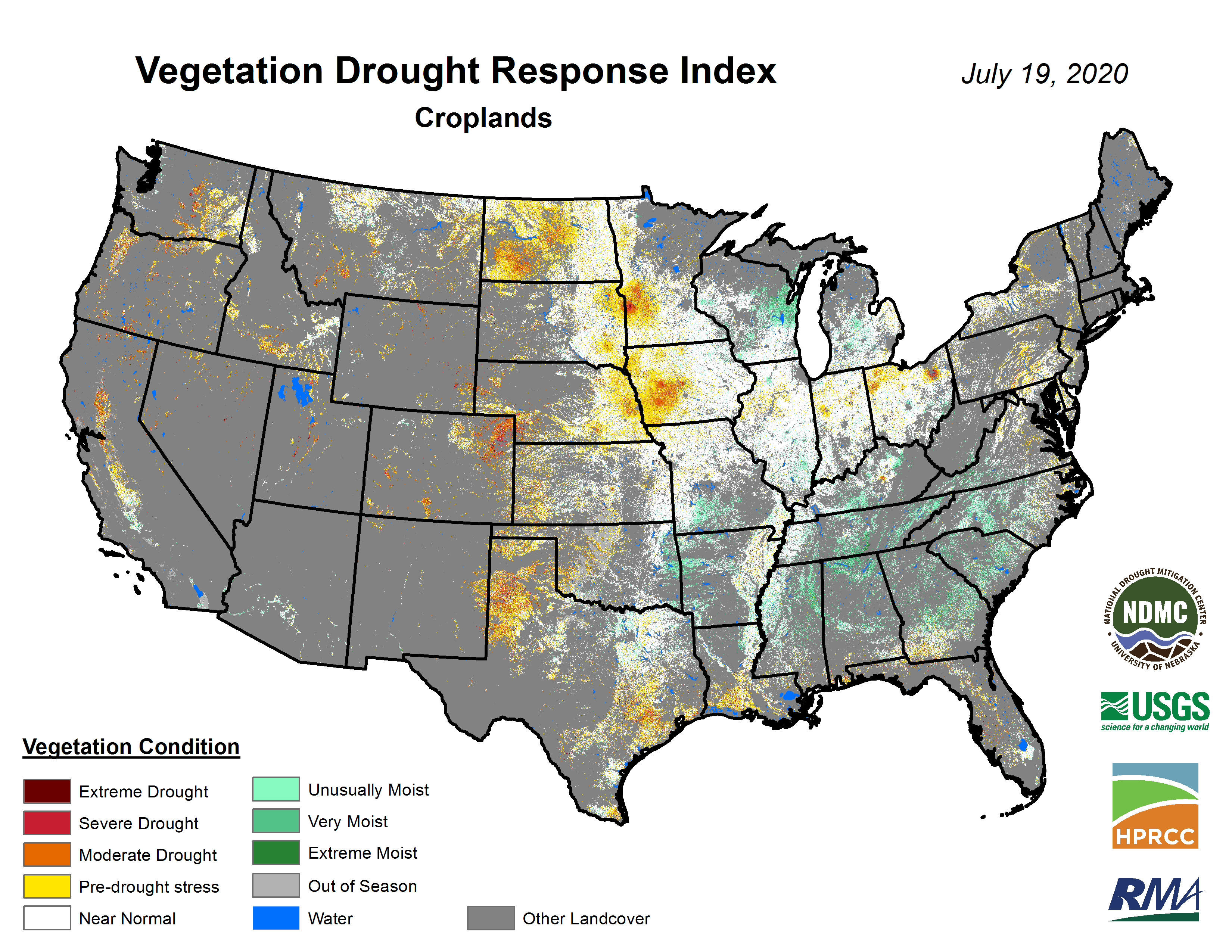 Figure 7. The Vegetation Drought Response Index over croplands in the U.S. Map courtesy of the University of Nebraska-Lincoln. Additional information can be found here. 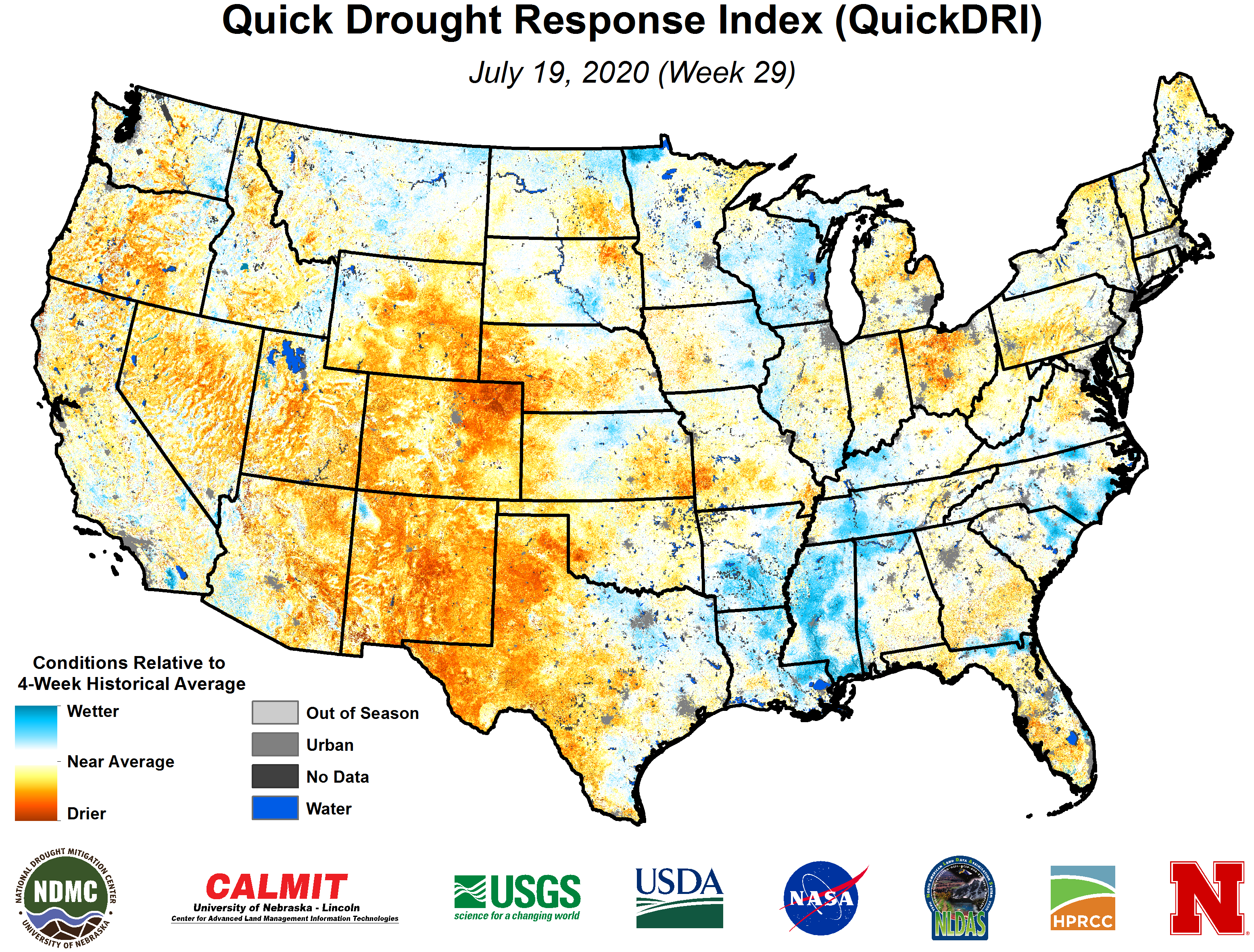 Figure 8. The Quick Drought Response Index courtesy of the University of Nebraska-Lincoln. Additional information can be found here.

According to the latest Crop Progress Report, U.S. corn is currently rated at 69 percent Excellent/Good (E/G) against 8 percent Poor/Very Poor (P/VP), the same as last week. Figure 8 shows that the median SMI of the Corn Belt is at -0.2 but continues to be in the same range as 2016-2018, all years with decently above trend corn. The percent of corn in the silking stage increased markedly last week, particularly in the ‘I’ states, Minnesota, and Nebraska. Soybean condition numbers are around that of last week, currently at 69 and 7 percent respectively. Over 90 percent of the spring wheat has headed in the northern U.S. and 68 percent of it is E/G, the same as last week. Cotton conditions continue to be mostly in good to fair condition, with the highest P/VP numbers coming out of Texas. Best cotton conditions are currently found in Alabama and Louisiana. 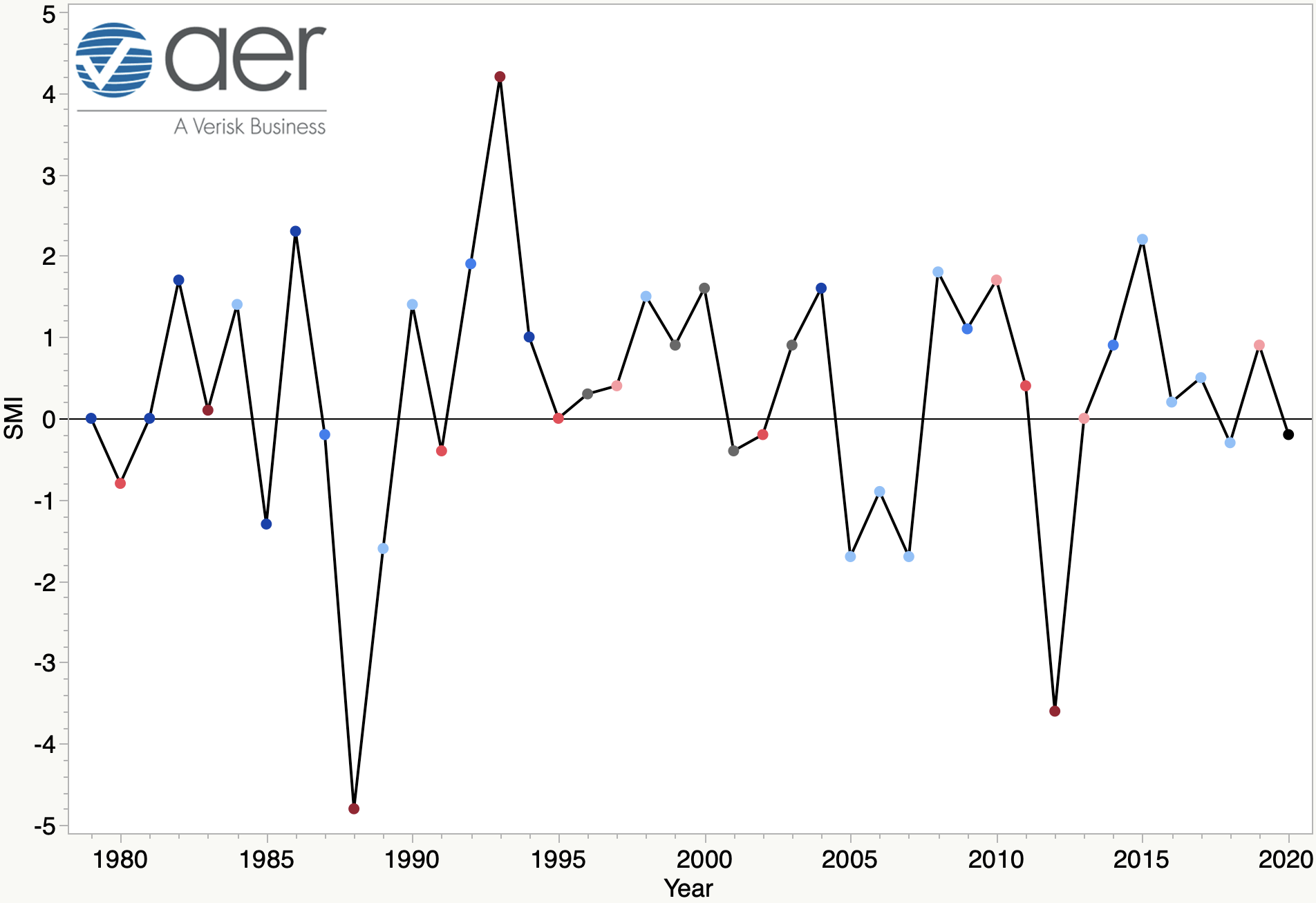