During the 2019 growing season, Dr. Eric Hunt of Atmospheric and Environmental Research, Inc. will be providing weekly updates of the soil moisture index (SMI) from the Noah-MP land surface model in the NASA LIS framework for the eastern 3/4 of the U.S. where row-crop agriculture is more common. The Evaporative Stress Index (ESI) will also be included in our analysis once data for all of the U.S. are available later this season. The analysis is intended to provide the larger agricultural and meteorological communities insight as to areas where soil moisture is excessive or deficient compared to average for that location and what that may mean for impacts. It is my goal that these maps can be an early warning signal for flash drought development or where flash flooding could be likely in the coming week if heavy precipitation materializes. Please be advised that the SMI should be viewed as complementary, not a substitute, to the U.S. Drought Monitor (USDM) and that declarations of drought for a particular location should never be based on the SMI alone. 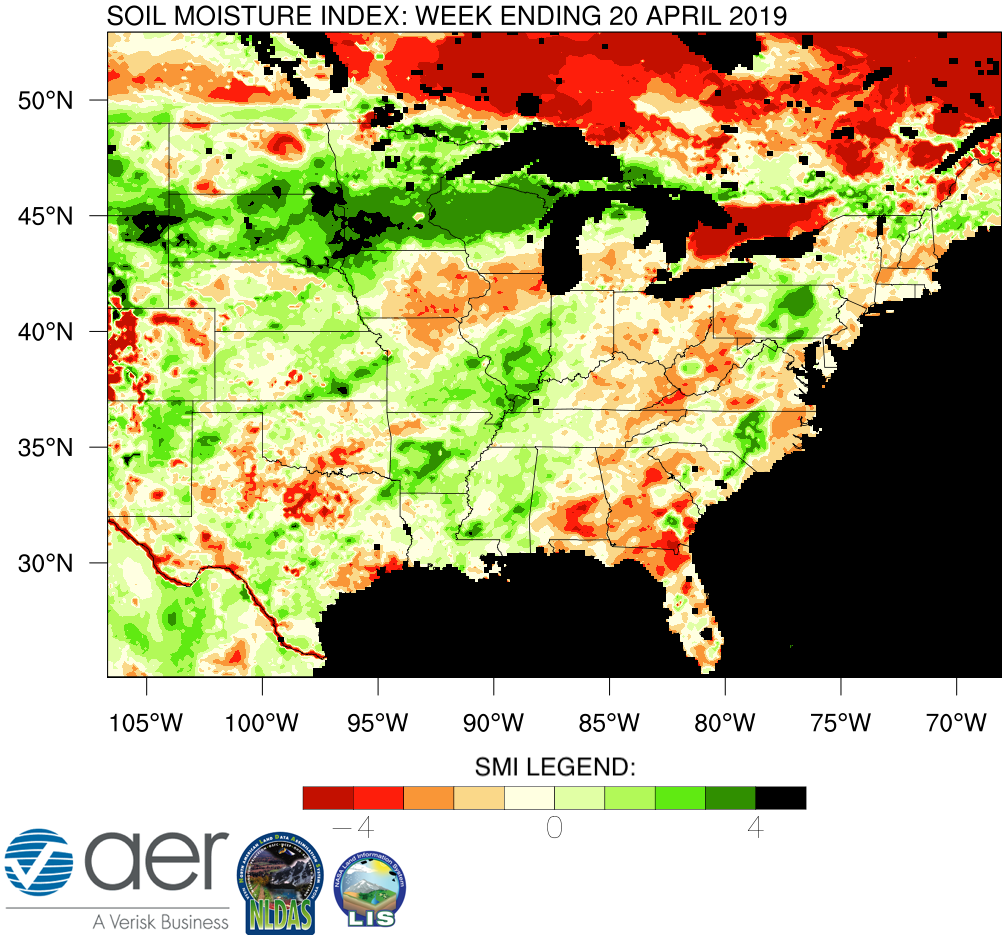 Figure 1. The Soil Moisture Index (SMI) for the 7-day period ending 20 April 2019. Results are based on output from the 0-1 m (surface to 3.23 feet) layers in the Noah-Multiparameterization (Noah-MP) land surface model. Noah-MP is run in the NASA Land Information System (LIS) framework with the North American Land Data Assimilation Version 2 (NLDAS-2) forcing dataset. The SMI calculation is based on the soil moisture index created in Hunt et al. (2009) such that ‘5’(dark green) is the wettest and ‘-5’ (dark red) the driest for the period of record.  The period of record used calculate the SMI for the current map is 1979-present.

As of last Saturday, the SMI indicates portions of the Corn Belt have dried out with a pocket of negative SMI’s in eastern Iowa and northern Illinois. Conditions remain very moist to the north from eastern South Dakota into Wisconsin. Slightly drier conditions were depicted over much of Ohio as well. Pockets of negative SMI’s also exist in North Dakota and this area is now in Abnormal Dryness on the latest Drought Monitor.

The SMI showed some improvement in much of the south central U.S., especially across southern Missouri, eastern Oklahoma, and Arkansas. Improvement was also noted in much of the eastern U.S., with some parts of Pennsylvania shifting from moderately negative to strongly positive over the past week.

The latest U.S. Drought Monitor shows abnormal dryness and moderate drought persisting along the Gulf Coast and into South Carolina. The SMI shows conditions have improved over coastal South Carolina in recent weeks but only minor improvements to the west in southern Georgia and Alabama.

Please direct any feedback or questions my way ( Eric.Hunt@aer.com ).