The latest SMI maps indicate the same pattern that has existed for the past several weeks, namely highly negative SMI values across the Western Corn Belt, western and central Pennsylvania, New England, and much of the western U.S. Strongly positive SMI values were found across much of the Mid-Atlantic, across the northern and southern of the Midwest, and down into parts of Kentucky, Tennessee, and Arkansas.

Across the Corn Belt, the U.S. Drought Monitor indicates moderate to extreme drought across the western half of Iowa and across the river into Nebraska, in good agreement with the SMI (Figures 1-2; Table 1), 30-day precipitation deficits (Figure 4), and VegDRI (Figure 6). While this season’s flash drought across the Western Corn Belt has been much less extreme in my view than 2012, the precipitation deficits since late June are rather impressive. No doubt the drought is having an impact on the crops and the heat the next few days will likely help (briefly?) expand the drought into more of Iowa and Nebraska and perhaps even parts of Illinois. There are some potential silver linings though:

1) It’s late August and for most of the Corn Belt this is the hottest weather of the season. While that is clearly not ideal for “making the crop”, the fact that we have gone this deep into the season without much in the way of thermal stress means the crop has gone through pollination and likely deep in the dent stage without having significant heat. For places that have been dry, this has been about the only saving grace, though this heat in parts of Iowa is probably just what was needed to guarantee below trend yield there.

2) With the exception of the most drought-stricken places, highs will be more in the low-to-mid 90’s, which will not have the same effect as widespread temperatures over 100F. Also, low temperatures are generally expected to drop down into the 65-70 range overnight, which will be less detrimental than lows in the upper 70’s all week. Again, not ideal, but not necessarily that unusual for there to be a spell of heat in the late summer.

3) Models all indicate this ending before the end of the week, with good chances for rain and much cooler temperatures into early September. For western Iowa and parts of Nebraska, this is likely going to be too late but other areas that have been in good shape should benefit.

4) Both ESI (Fig. 5) and QuickDRI (Fig. 7) are more bullish on implied vegetation stress over the drought affected region than earlier this month. But it’s considerably less severe than what is depicted across the High Plains and less severe than across western/central Pennsylvania and New England. My current thinking is that this week will probably guarantee yields will stay under 190 bpa but yields can still easily exceed 185 bpa if rain and cooler weather materialize as forecast.

Outside of the Corn Belt, High Plains, and western U.S. in general, the biggest area of concern for drought is across western and central portion of Pennsylvania and into eastern Ohio. While this is not prime cropland, the very dry soils could create conditions conducive to forest fires. Parts of the southeast are also dry but widespread flash drought development is not a concern at the present time 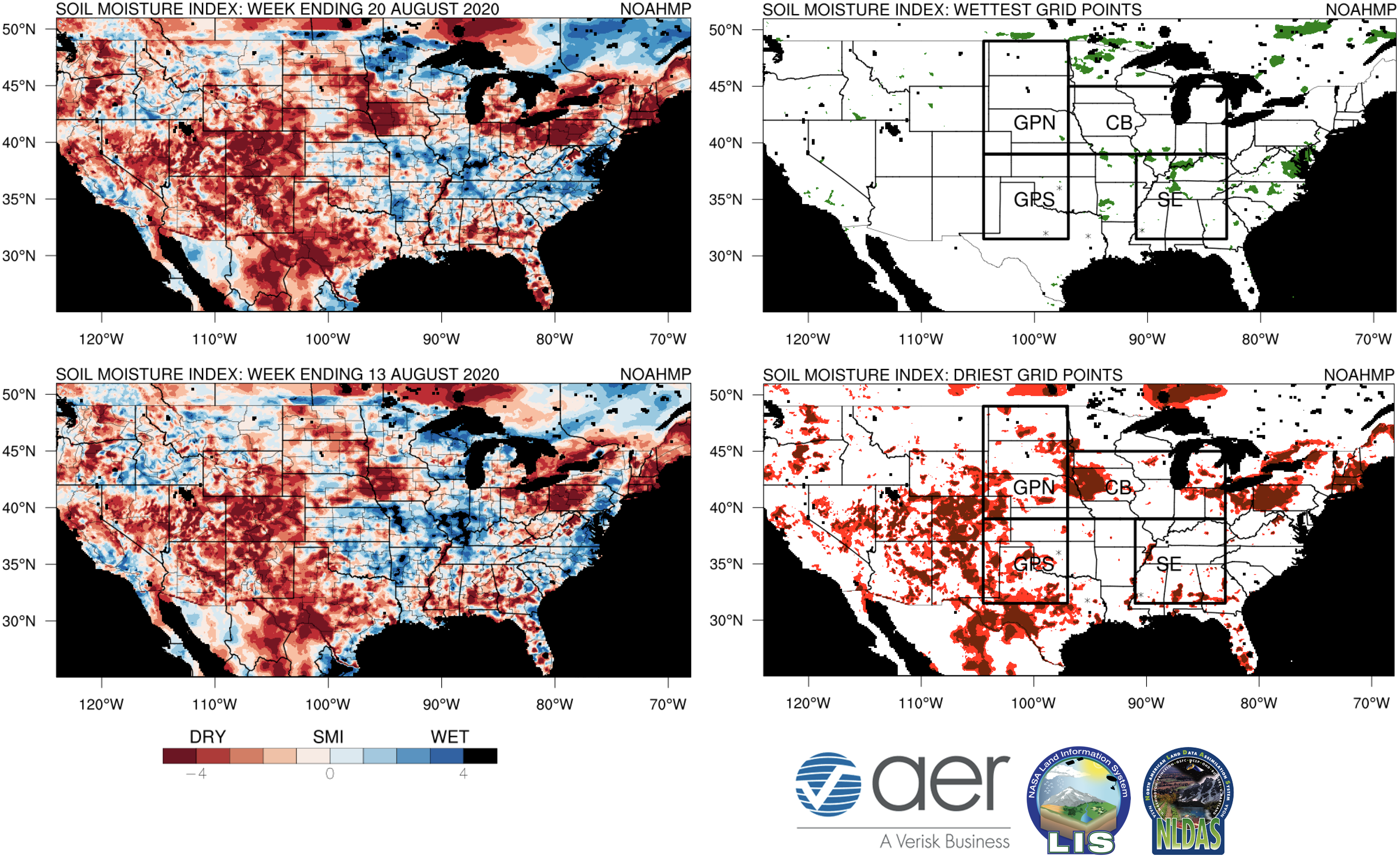 Figure 1. The Soil Moisture Index (SMI) for the 7-day period ending 20 August 2020 (top left) and 13 August 2020 (bottom left). On the right hand side are the grid points where the SMI is at or above 3.0 (top right, green) and grid points where the SMI is at or below 3.0 (bottom right, red).  Results are based on output from the 0-1 m (surface to 3.23 feet) layers in the Noah-Multiparameterization (Noah-MP) land surface model. Noah-MP is run in the NASA Land Information System (LIS) framework with the North American Land Data Assimilation Version 2 (NLDAS-2) forcing dataset. The SMI calculation is based on the soil moisture index created in Hunt et al. (2009) such that ‘5’(dark green) is the wettest and ‘-5’ (dark red) the driest for the period of record.  The period of record used calculate the SMI for the current map is 1979-present. 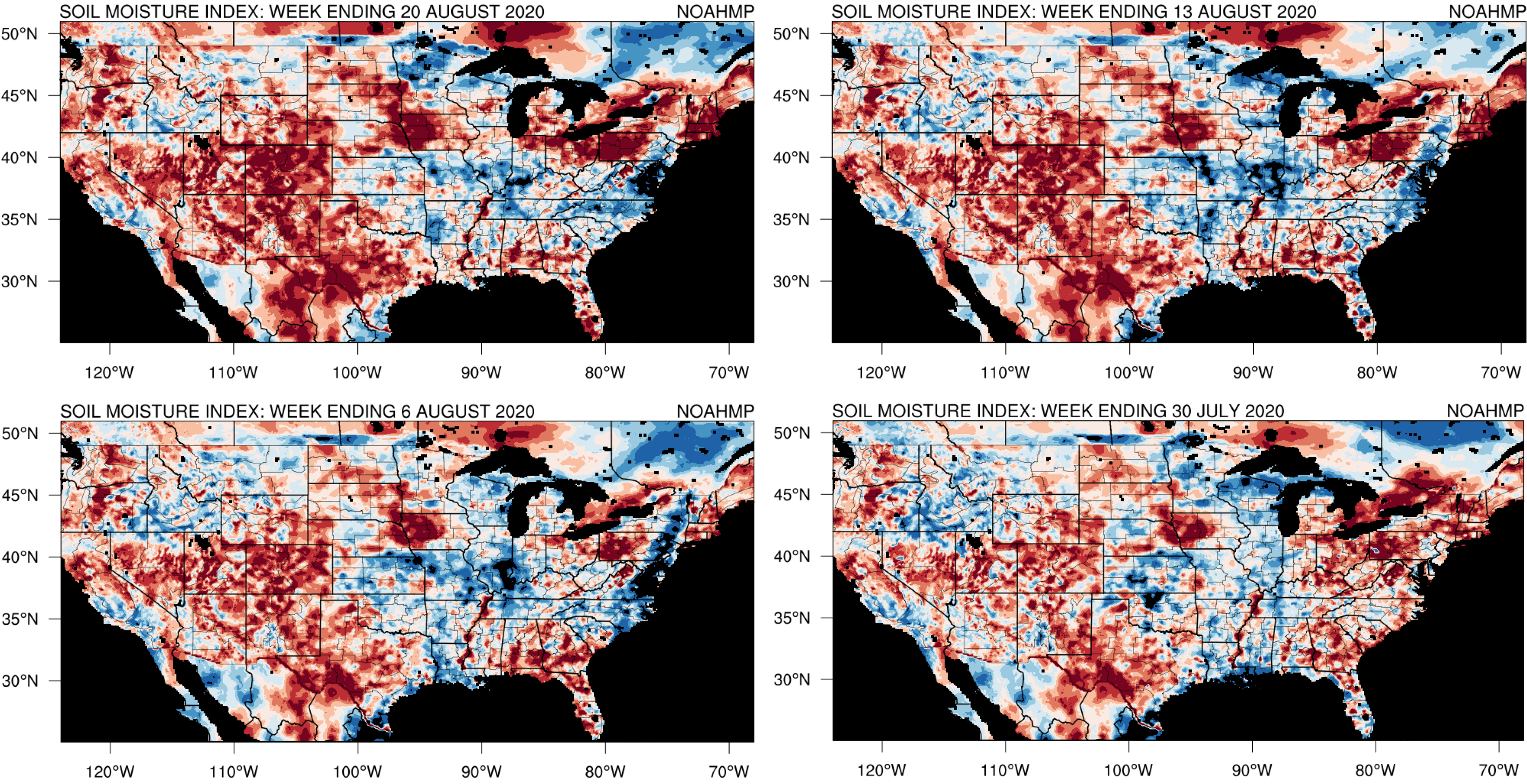 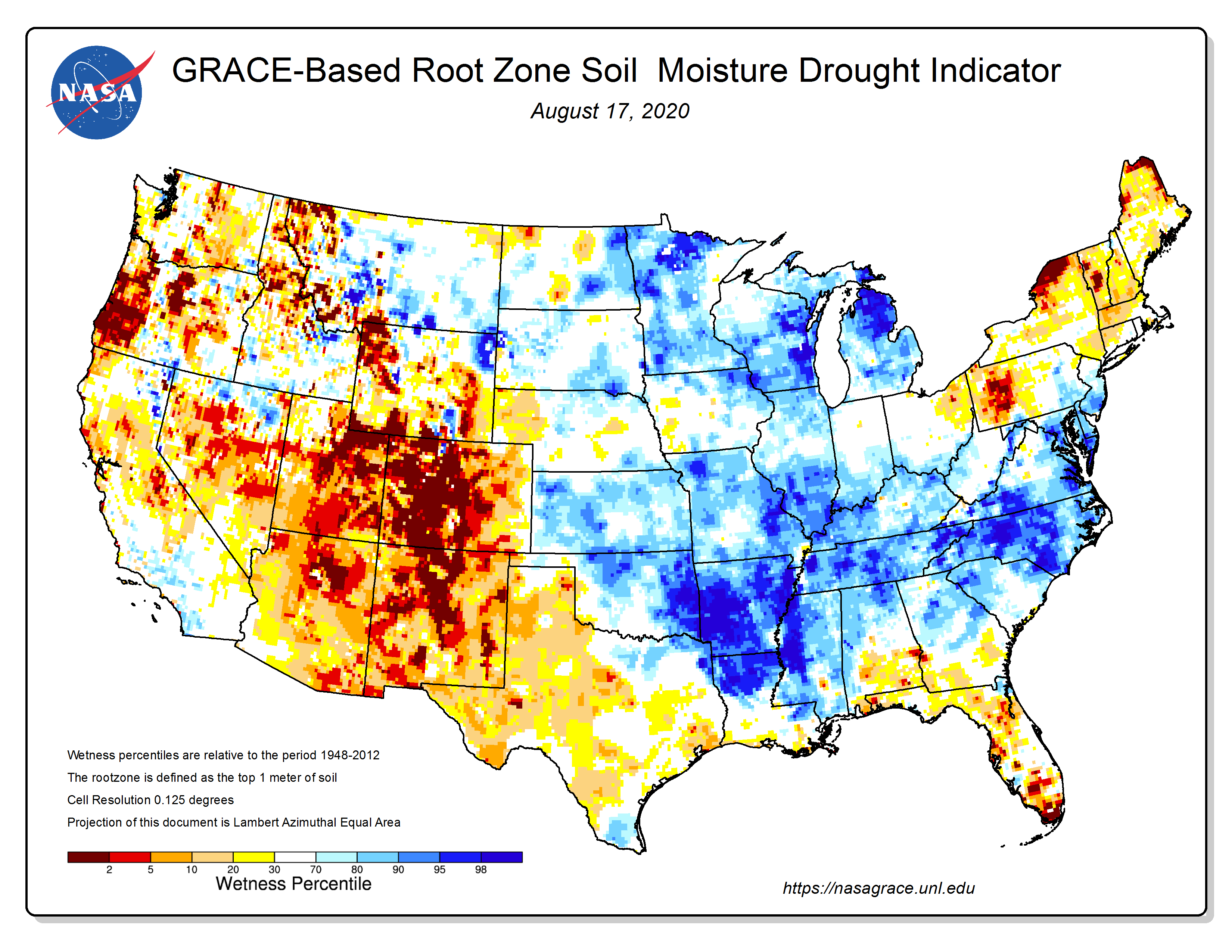 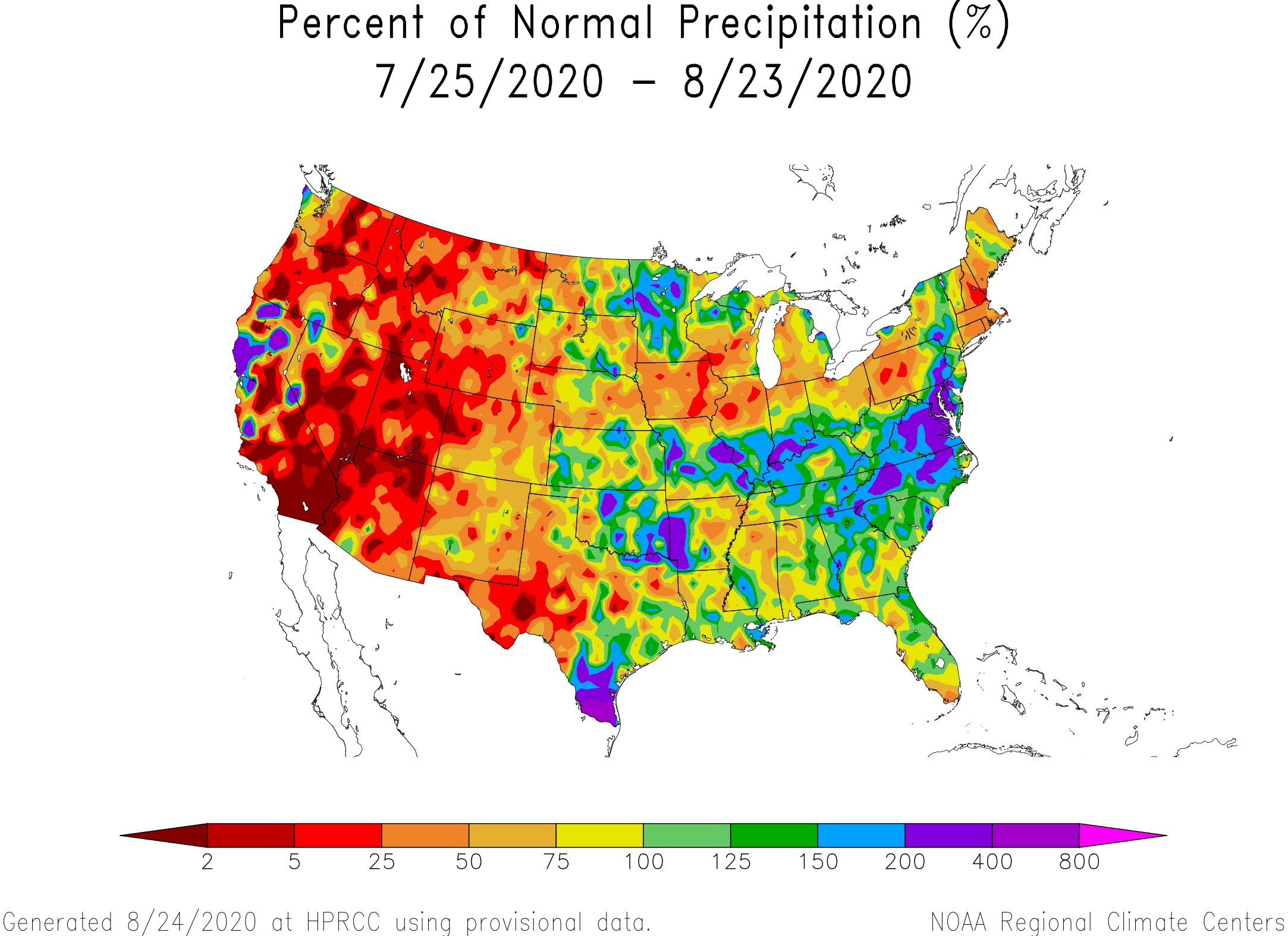 Figure 4. Percent of normal precipitation over the past 30 days (through Sunday 23 August).  Map courtesy of the High Plains Regional Climate Center. 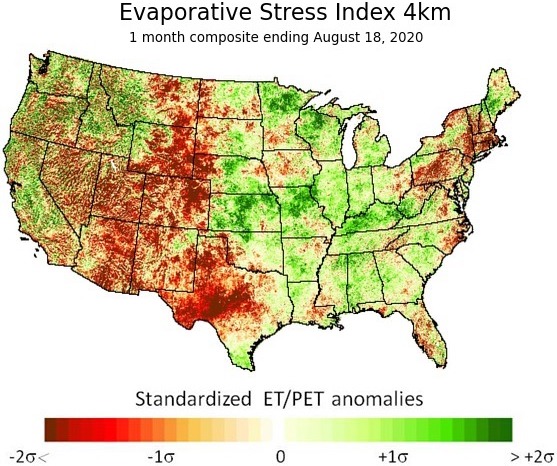 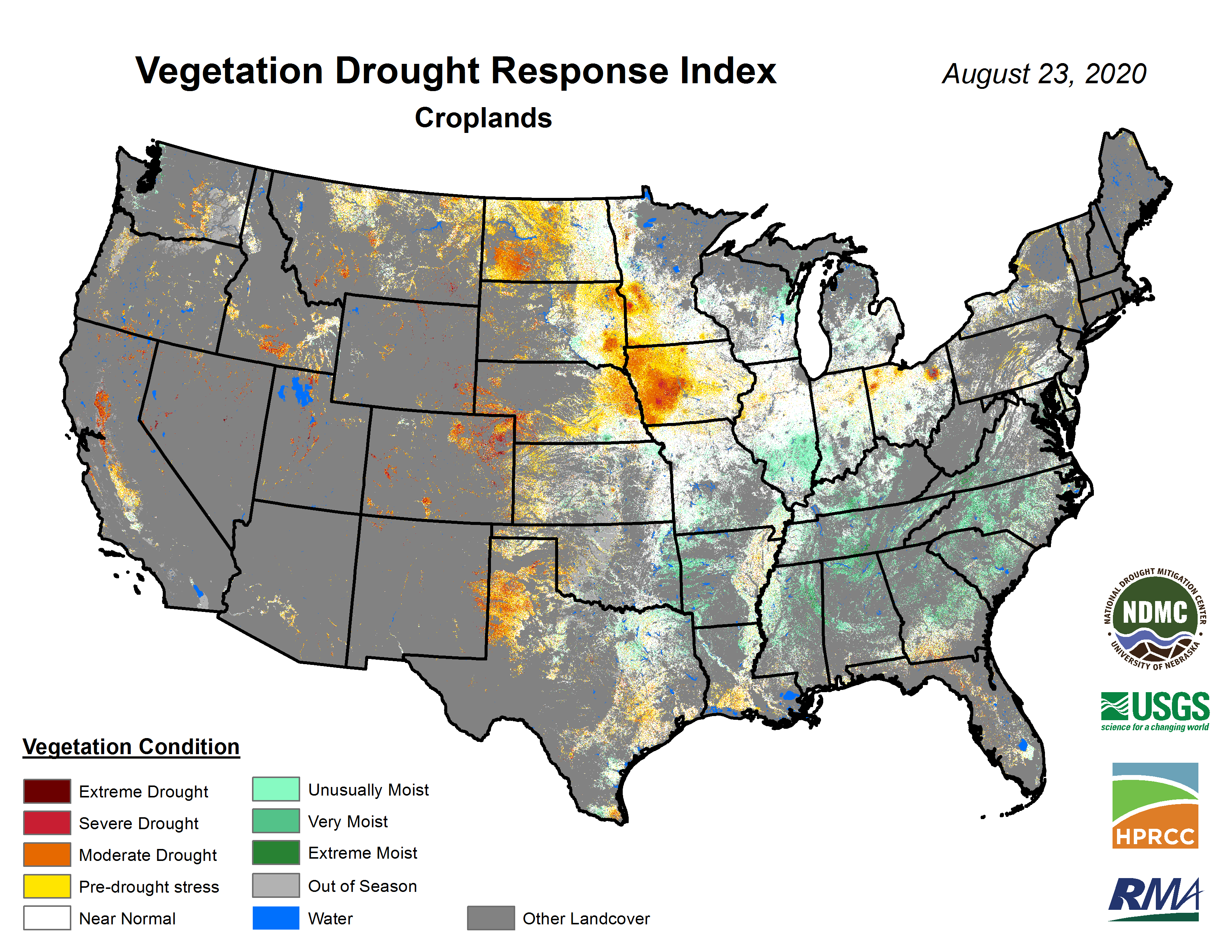 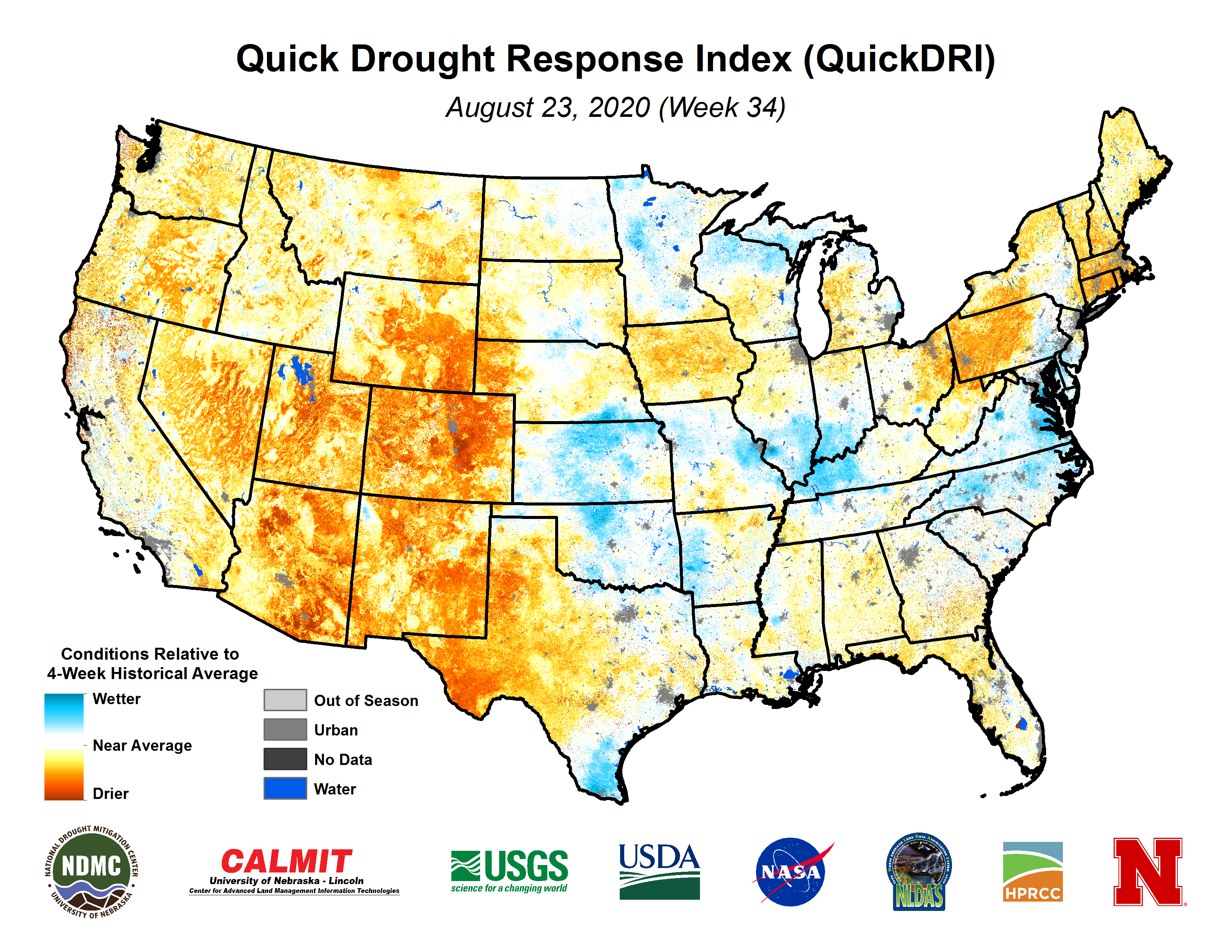 According to the latest Crop Progress Report, 64 percent of corn is rated Excellent/Good (E/G) vs. 12 percent Poor/Very Poor (P/VP), a drop from last week. I would advise a bit of caution with using condition reports at this point of the season to gauge final corn yield. For example, at this point in the 2010 season, 70 percent of corn was E/G vs. 10 P/VP. In 2017, those numbers were 62 and 12 respectively. The former was below trend nationally and the latter was more than 4 points above trend. Look for an updated corn yield forecast in next week’s update. Figure 8 shows that the median SMI last week across the Corn Belt was -1.3, the lowest it has been thus far this season, but still within range of other years that had solid above trend yield years. About half of the corn crop has reached the dent stage and some corn is starting to reach maturity. Soybean condition remains less affected by recent dryness, with 69 percent E/G vs. 8 percent P/VP, and almost all pods are set. Cotton continues to be in good to fair condition, with poorest conditions across Texas where drought has been the rule this season. 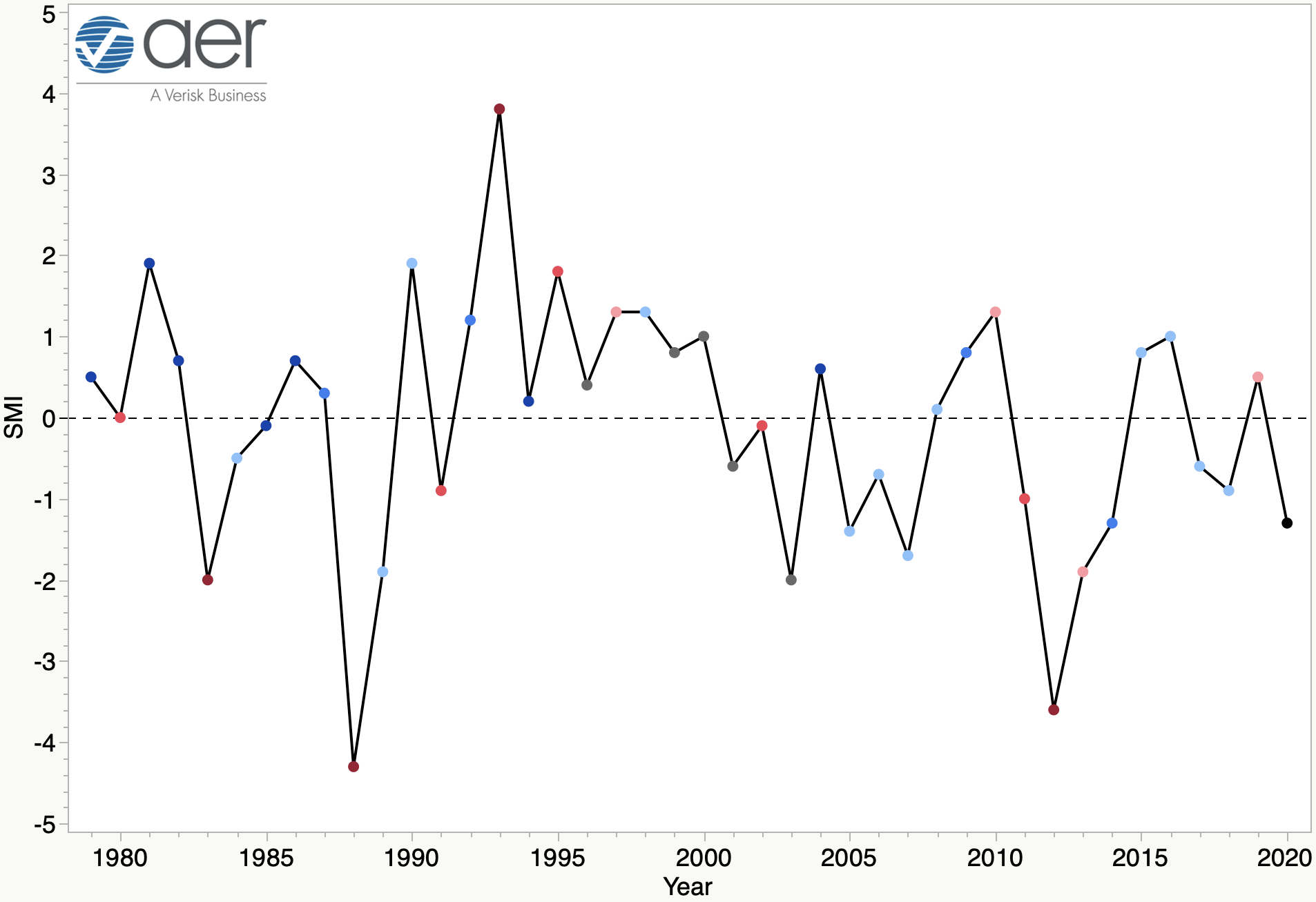