During the 2021 growing season, Dr. Eric Hunt of Atmospheric and Environmental Research, Inc. will be providing weekly updates of the soil moisture index (SMI) from the Noah-MP version 3.6 land surface model in the NASA LIS framework for the entire U.S. and regional analysis of the SMI over the four regions of U.S. where the majority of corn, soybean, wheat, and cotton production occurs. Additionally, soil moisture index maps of South American and western Russia are provided at the end of the blog. The analysis is intended to provide the larger agricultural and meteorological communities insight as to areas where soil moisture is excessive or deficient compared to average for that location and what that may mean for impacts. It is my goal that these maps can be an early warning signal for flash drought development or where flash flooding could be likely in the coming week if heavy precipitation materializes. Please be advised that the SMI should be viewed as complementary, not a substitute, to the U.S. Drought Monitor (USDM) and that declarations of drought or flash flood potential for a particular location should never be based on the SMI alone. The Evaporative Stress Index (ESI) and VegDRI will included in our analysis a bit later this season. Various other maps that help give insight into current conditions across the U.S will also be shown as needed

As of last Thursday (22 April), 75% of the grid points in the NLDAS-2 domain (Fig. 1) have a soil moisture index (SMI) at or less than 0.0. In other words, roughly three-quarters of the country has drier than average soils. Thankfully the percentage of grid points with an SMI less than -3.0 (Fig. 2) is under 30 percent. Still the amount of area with lower soil moisture as we inch closer to summer is concerning and more of the country has less root zone soil moisture in an absolute sense (Fig. 3) than a month ago.

The SMI maps are in reasonable agreement with the U.S. Drought Monitor (Fig. 4) and the Quick Drought Response Index (Fig. 5), which was designed to be responsive to more rapidly intensifying drought. In addition to a majority of the western U.S., which seems to be mimicking a line from an old Johnny Cash song about “perpetual drought”, other areas of current concern are the Great Lakes/Ohio River Valley region, North Dakota (excluding the southeast corner) and the coastal southeast. The biggest concern of the three is North Dakota, mostly because the drought has been ongoing for months and little rain is forecast. The area of concern in Georgia into the Carolinas is not in drought yet but given the current conditions and forecasted precipitation, it may be headed in that direction. Precipitation in the Great Lakes region looks more promising over the next ten days, though there should be enough dry weather to get some planting in.

My sources from rural areas in eastern Nebraska and western Illinois indicate some farmers are making progress planting soybean and there should be enough dry windows in most of the Corn Belt to make decent planting progress overall in the coming 7-10 days. Spring wheat planting is ahead of schedule in the northern U.S. but it will be imperative for rain to return to North Dakota in the coming weeks or yields likely will be lower than in 2017. This week also features two GrassCast maps (Fig. 6a-b). GrassCast shows the expected deviation from average of pasture biomass in the Great Plains and Southwest regions. Assuming average precipitation, GrassCast is currently forecasting fair conditions in the Plains. However, even with average or above average precipitation, there is a strong likelihood of much below average forage production in the coming season.

Better news this week across South America and Russia, where many dry areas have picked up some beneficial moisture. 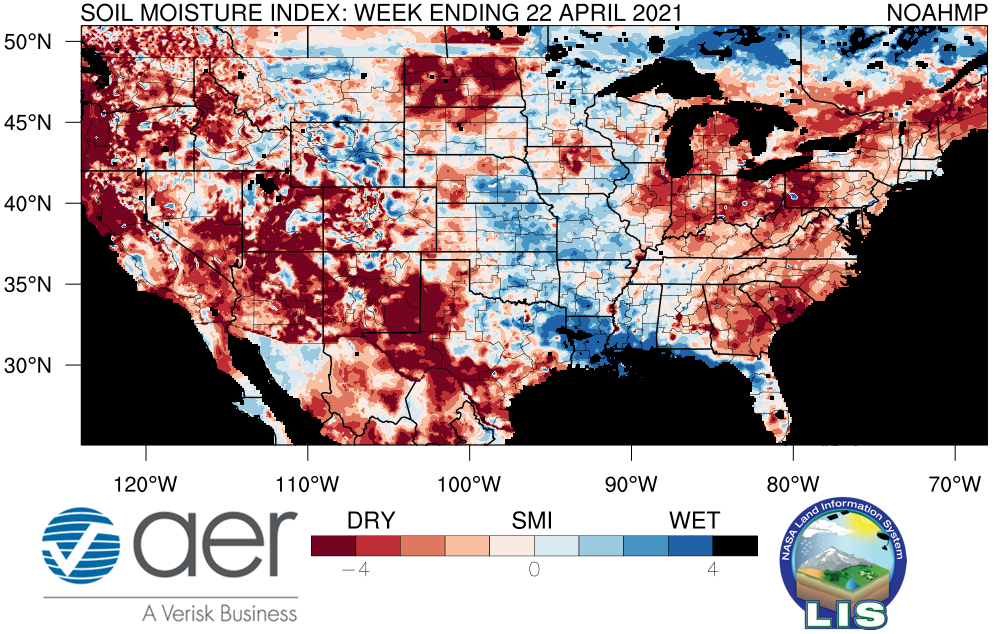 Figure 1. The Soil Moisture Index (SMI) for the 7-day period ending 22 April 2021. Results are based on output from the 0-1 m (surface to 3.23 feet) layers in the Noah-Multiparameterization (Noah-MP) land surface model. Noah-MP is run in the NASA Land Information System (LIS) framework with the North American Land Data Assimilation Version 2 (NLDAS-2) forcing dataset. The SMI calculation is based on the soil moisture index created in Hunt et al. (2009) such that ‘5’(dark blue) is the wettest and ‘-5’ (dark red) the driest for the period of record.  The period of record used calculate the SMI for the current map is 1979-present. 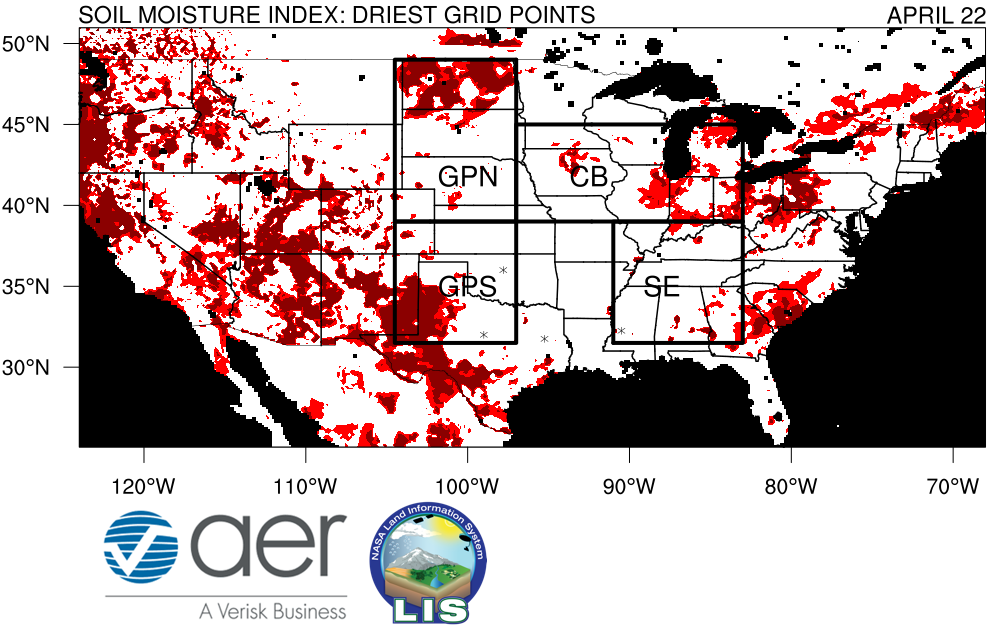 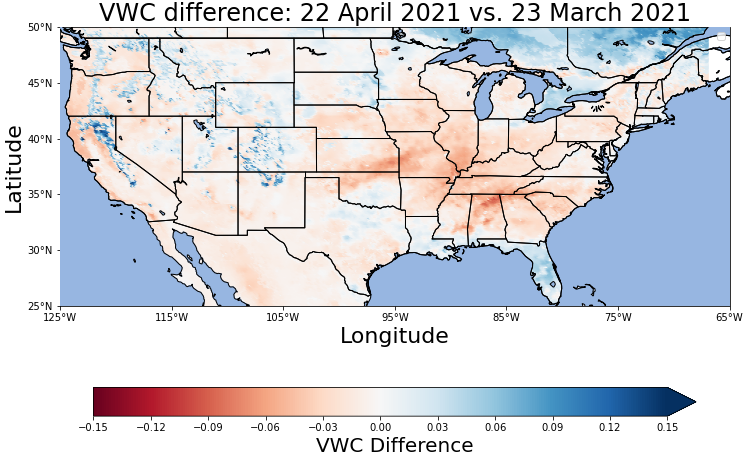 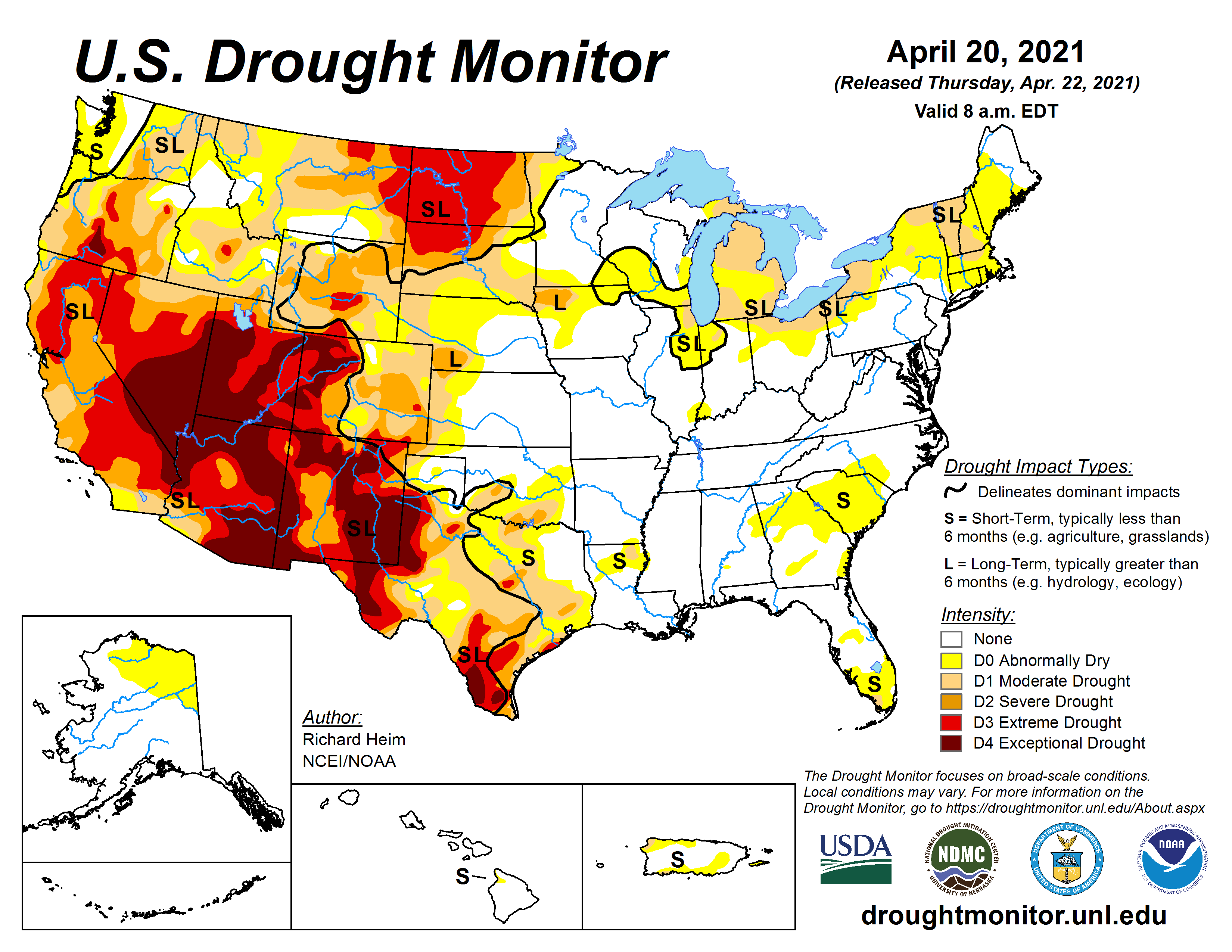 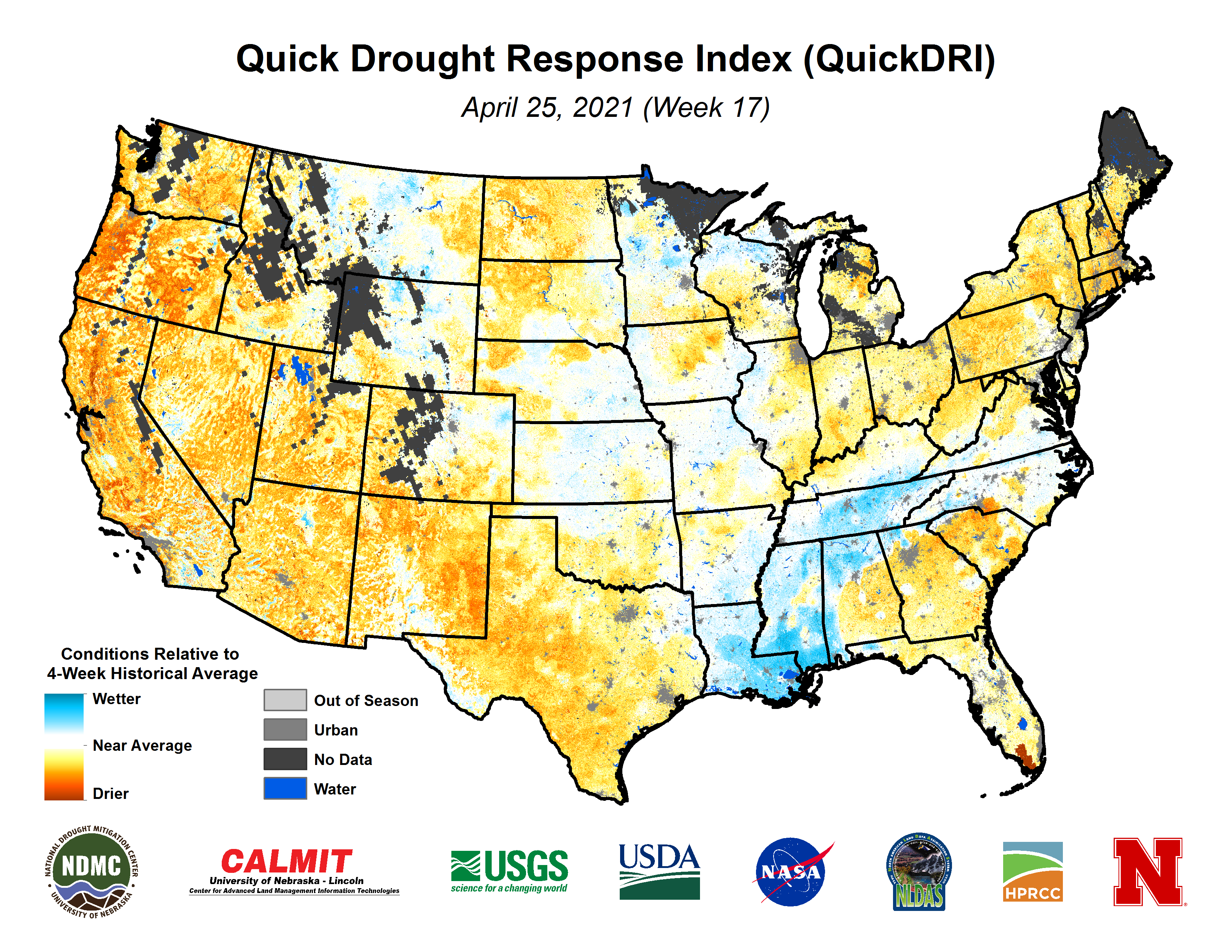 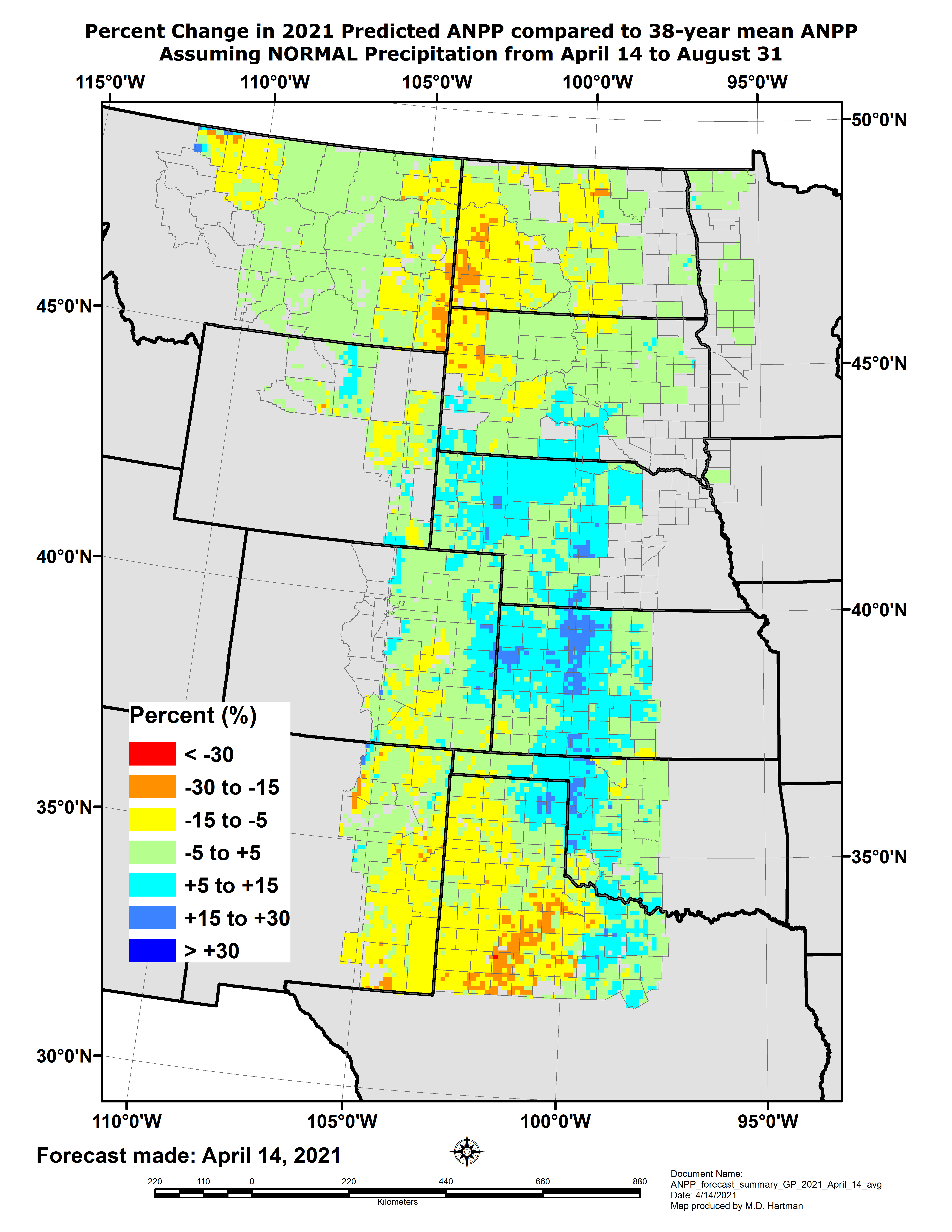 Figure 6a. GrassCast forecast for the Great Plains region in 2021. Forecast assumes average precipitation. Map courtesy of the University of Nebraska-Lincoln and the USDA. 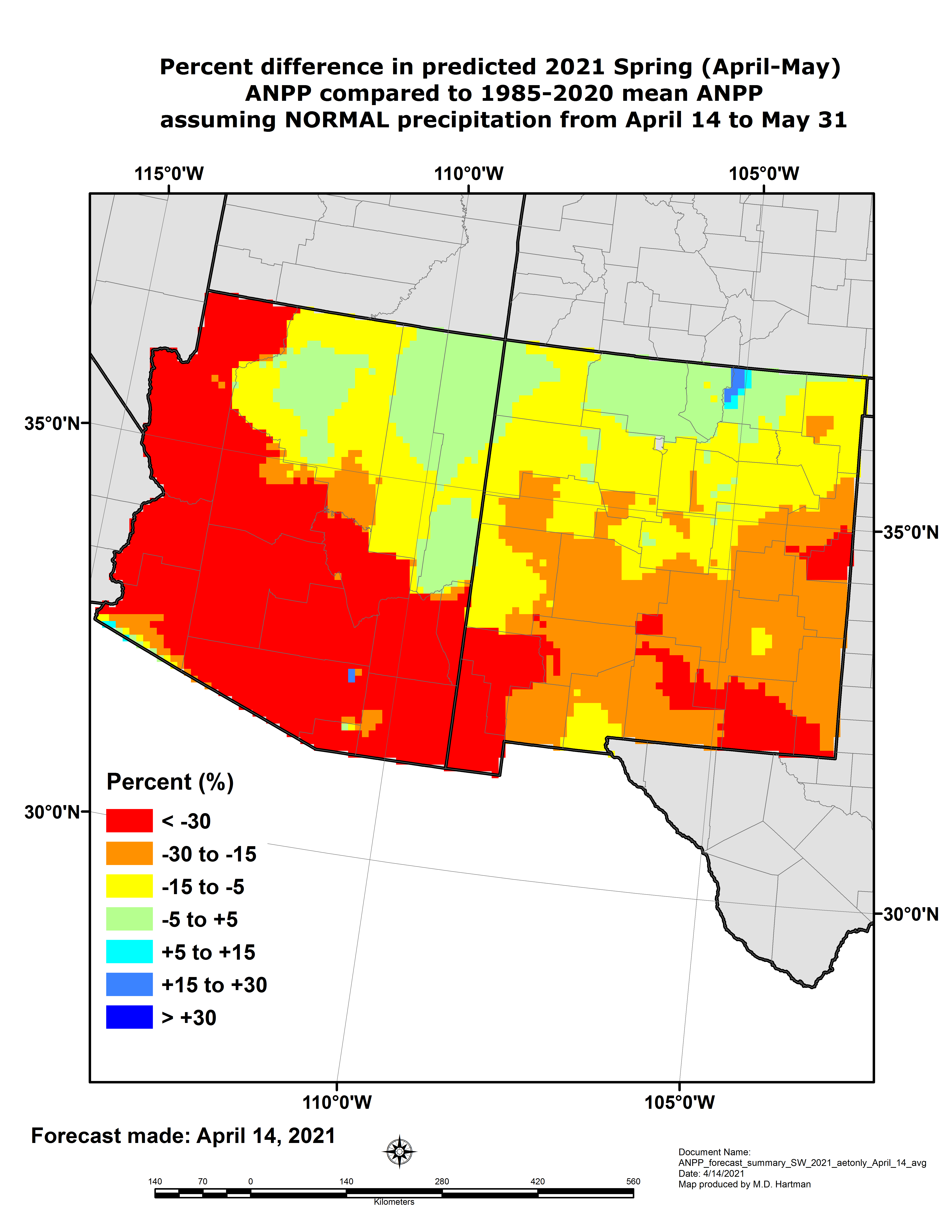 Figure 6b. GrassCast forecast for the Southwest region in 2021. Forecast assumes average precipitation. Map courtesy of the University of Nebraska-Lincoln and the USDA. 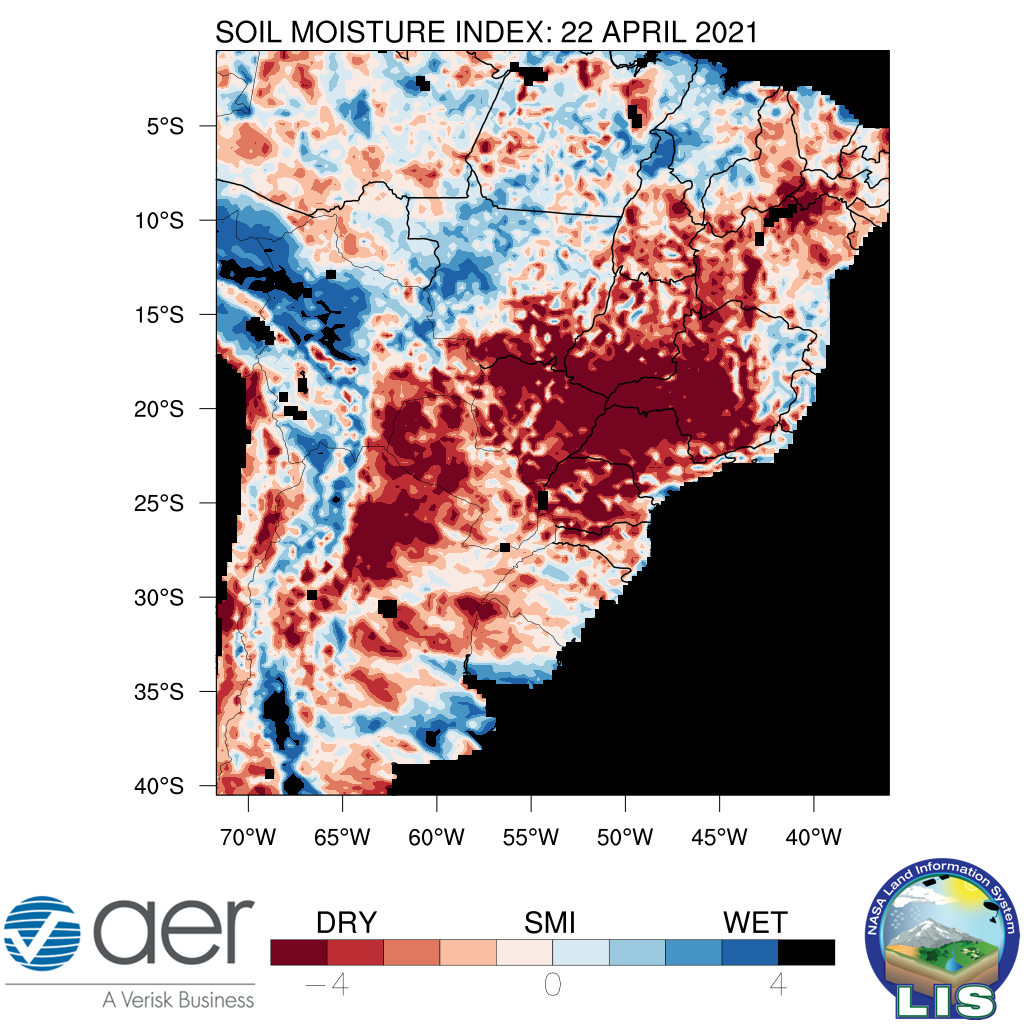 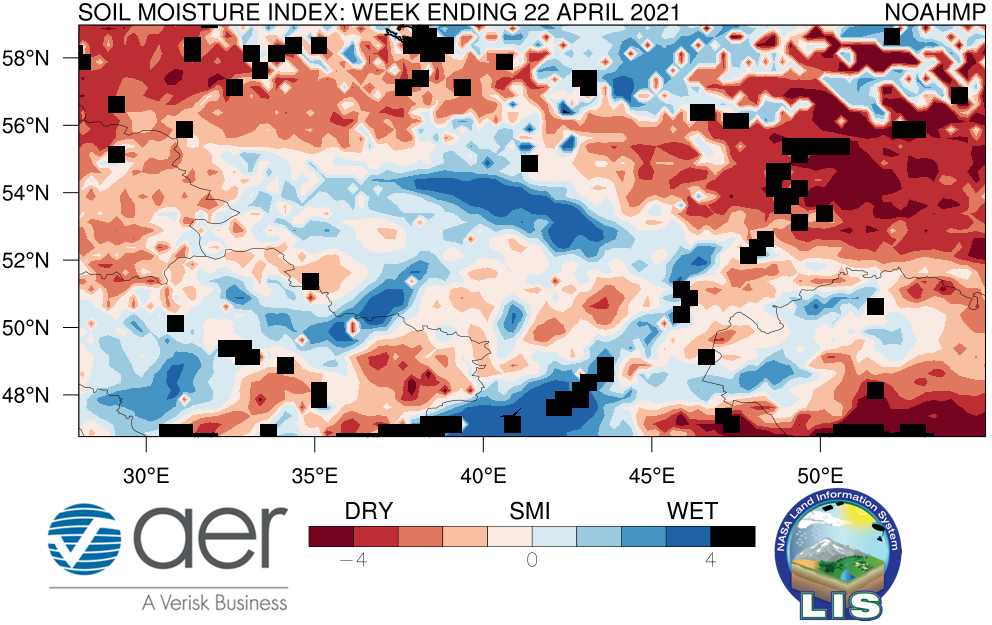