Some places that needed moisture got their requests answered over the previous week, particularly in the southern Great Plains region where the SMI showed decent improvements over previous weeks (Figures 1-3; Table 1). The biggest improvement was over the I-35 corridor from central Kansas into north Texas, though portions of north central Oklahoma did not get enough precipitation to show significant improvement. Nevertheless, under 20 percent of the Great Plains South region now has an SMI below -3.0, a big improvement from last week and the lowest total since early June. This has put the brakes on acceleration of flash drought in the region for the time being. But the season is also not over yet and the U.S. Drought Monitor still shows extreme drought over the southern High Plains of Colorado and western Kansas. It would certainly not be unprecedented for this to be a season in the southern Plains where there are periods of rapid declines in soil moisture and vegetation health punctuated by brief improvements. For now though the area is diverging from seasons like 2011 and 1980, which is a good thing unless you really were hoping for extreme drought and heat.

Sections of the eastern Corn Belt also picked up some welcomed rain (Figure 4), with most of Indiana and Ohio showing modest improvements in the SMI. Improvements were noted in some of the western Corn Belt as well, particularly over northwest Iowa and southwest Minnesota. Pockets of eastern Nebraska and eastern South Dakota are also sufficiently moist now too. The ESI from last Tuesday (Fig. 5) is still showing negative values (indicating ET is not meeting as much atmospheric demand for moisture as normal for a location) but suspect subsequent ESI maps will show improvements over much of the Corn Belt. Excessive moisture has not been a topic in this region lately but much of northeast Iowa and parts of western Wisconsin could use a dry week. The median SMI over the Corn Belt improved almost a full point over last week and now stands at 0.2 and has mostly been staying in a Goldilocks zone this season. More thoughts on what that may mean for yield prospects later.

Further north and west in North Dakota, conditions remained quite dry with most of central North Dakota having an SMI below -3.0. The Vegetation Drought Response Index (VegDRI; Fig. 6) shows that rangeland in North Dakota is as bad, if not worse, than over the southern High Plains where drought has been entrenched for most of the warm season. This signal is also picked up in VegDRI’s “flash drought cousin” QuickDRI (Figure 7). The other area of concern in recent weeks has been New England. A few locations did improve a bit, but this is a solid month straight of abnormally low soil moisture for the New England states of Massachusetts, Maine, New Hampshire, and Vermont and this deficit is also shown in the ESI and Quick DRI maps (Figures 5 and 7). As I have stated in recent blogs, there could be issues with wildfires and forest fires in the region this summer if this continues.

Rounding out the other sections of the U.S., the delta region of Mississippi and Arkansas remains quite moist as does much of North Carolina, Virginia, and West Virginia. Most of the southeast has been free of drought so far this summer but parts of eastern Alabama and Georgia will be worth watching for further intensification and/or expansion. The stormy pattern has kept the Pacific Northwest section moist for the time of year, with central Oregon and Washington as exceptions. In this area, rangeland conditions are still fairly poor according to VegDRI and will be more vulnerable with any spells of heat that occur later this summer. 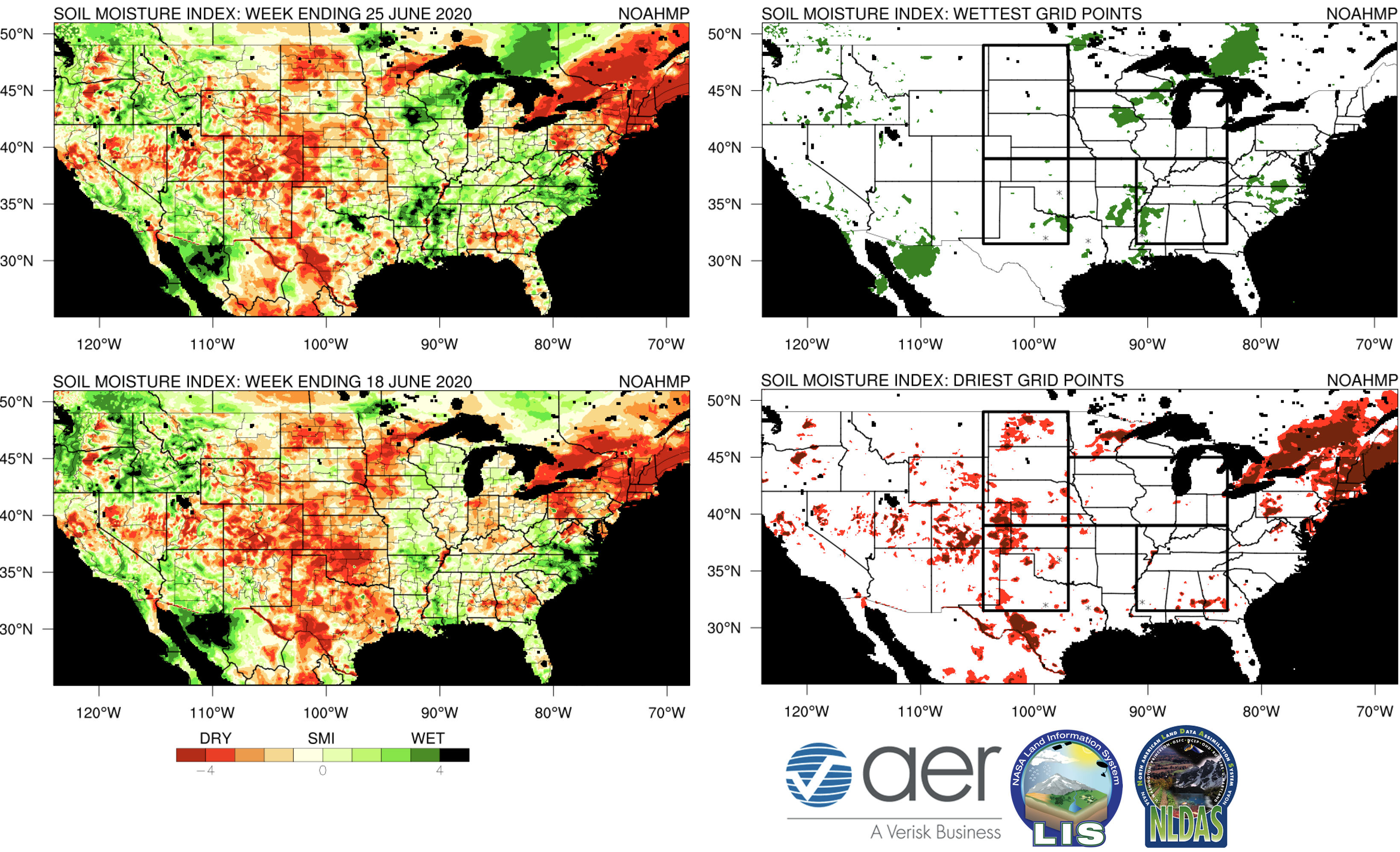 Figure 1. The Soil Moisture Index (SMI) for the 7-day period ending 25 June 2020 (top left) and 18 June 2020 (bottom left). On the right hand side are the grid points where the SMI is at or above 3.0 (top right, red) and grid points where the SMI is at or below 3.0 (bottom right, red).  Results are based on output from the 0-1 m (surface to 3.23 feet) layers in the Noah-Multiparameterization (Noah-MP) land surface model. Noah-MP is run in the NASA Land Information System (LIS) framework with the North American Land Data Assimilation Version 2 (NLDAS-2) forcing dataset. The SMI calculation is based on the soil moisture index created in Hunt et al. (2009) such that ‘5’(dark green) is the wettest and ‘-5’ (dark red) the driest for the period of record.  The period of record used calculate the SMI for the current map is 1979-present. 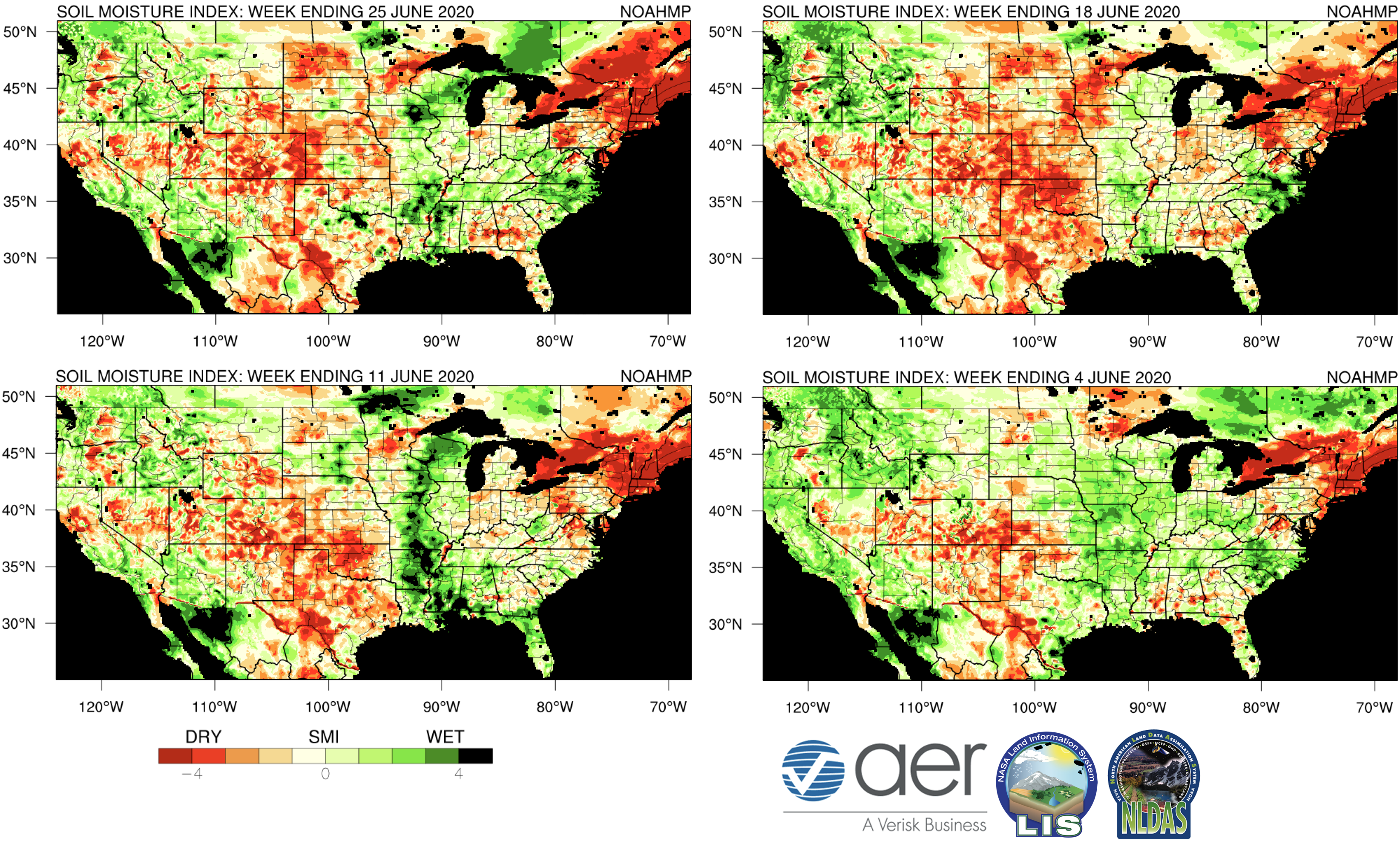 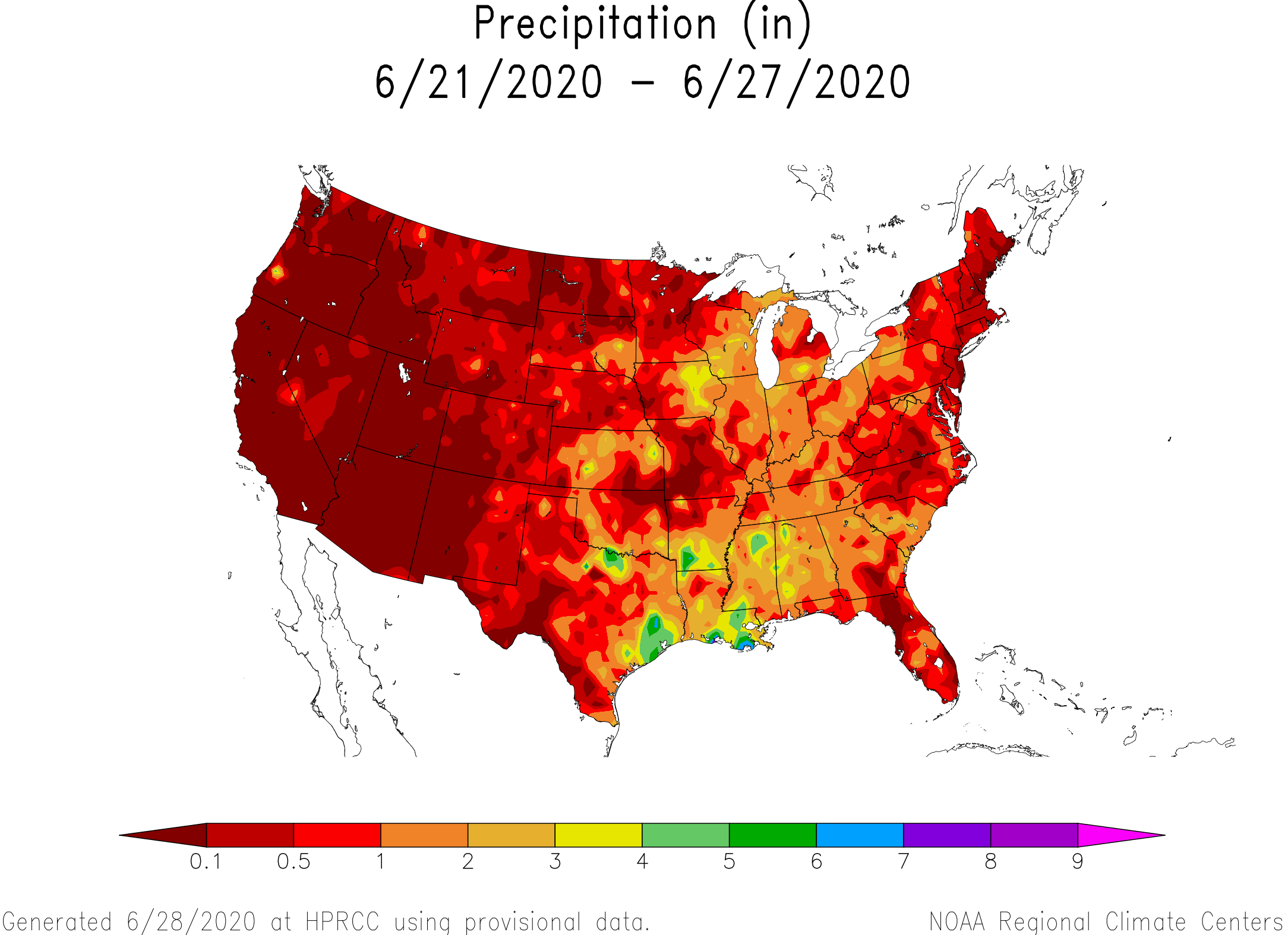 Figure 4. Total precipitation over the past seven days (through Sunday 21 June).  Map courtesy of the High Plains Regional Climate Center. 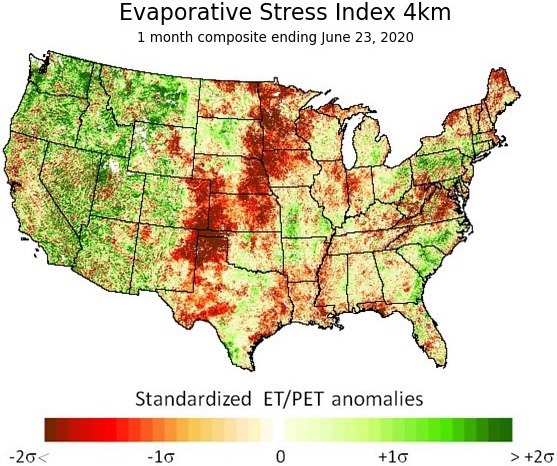 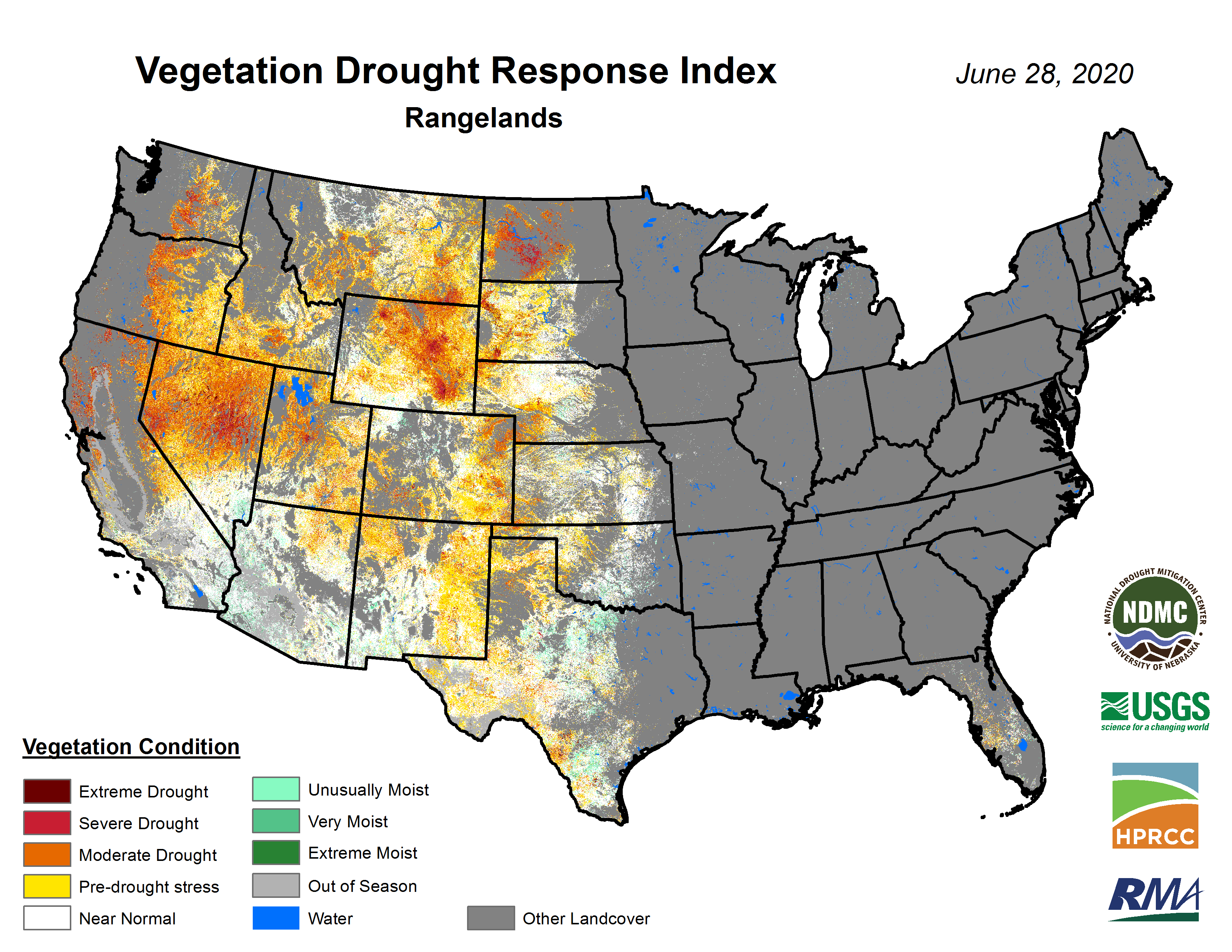 Figure 6. The Vegetation Drought Response Index courtesy of the University of Nebraska-Lincoln. Additional information can be found here. 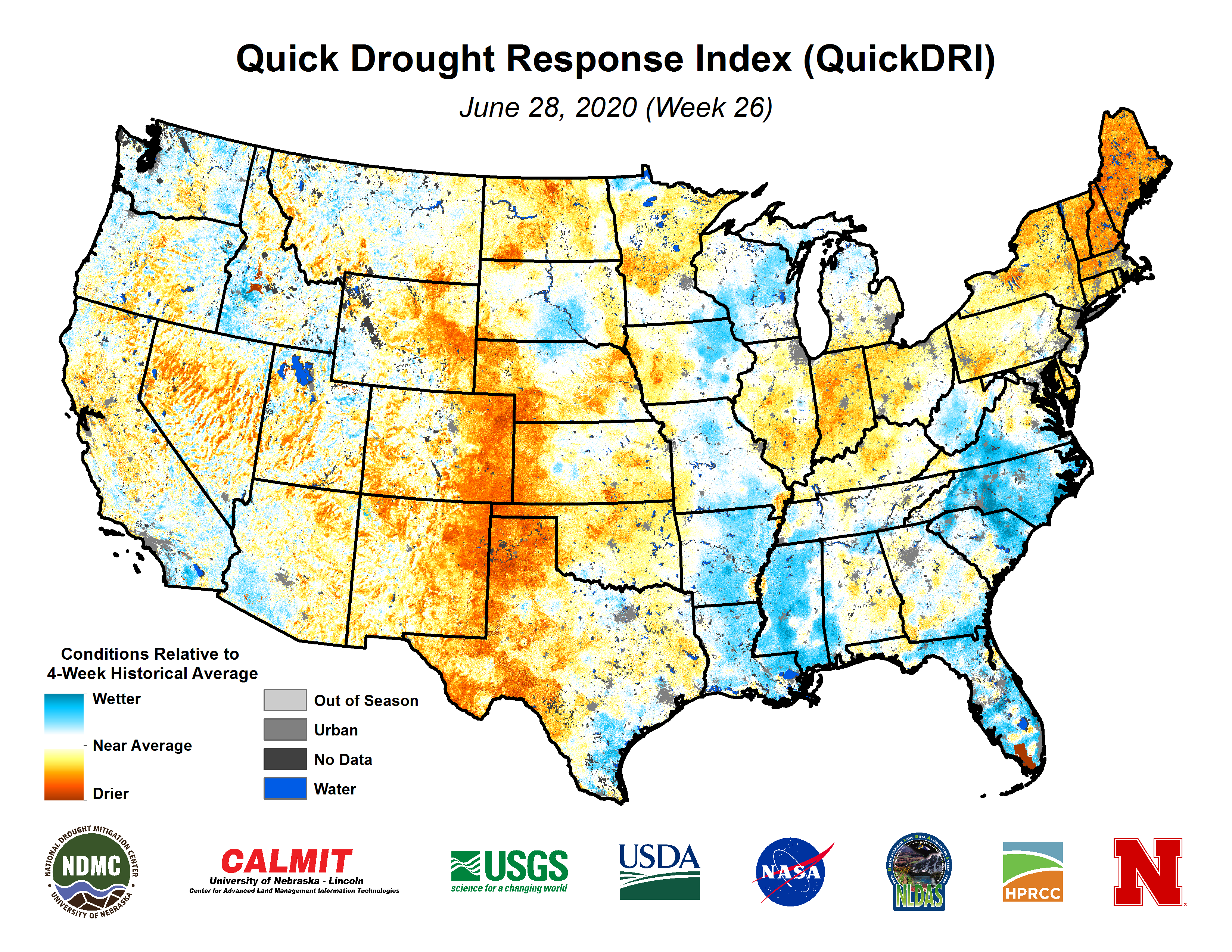 According to the latest Crop Progress Report, U.S. corn is currently rated at 73 percent Excellent/Good (E/G) against 5 percent Poor/Very Poor (P/VP), a slight improvement over last week. Figure 8 shows that the median SMI of the Cron Belt is just above 0.0 and continues to be in the same range as recent years (e.g., 2014, 2016-2018) that finished above trend. Years where the SMI remains in the “Goldilocks range” between -1.0 and 1.5 usually have above trend corn. Soybean numbers are nearly identical at 71 and 5 percent respectively. The winter wheat crop harvest is nearly complete in Oklahoma and Texas and good progress was made in Kansas last week. Wheat condition is decent overall, 52 percent E/G vs. 16 percent P/VP, with a higher percentage of poor crop conditions in Colorado. Around 36 percent of the spring wheat has headed in the northern U.S. and 69 percent of it is E/G.  While solid, this is a 6-percentage point drop from last week, mostly due to the drought that has developed in North Dakota. Cotton planting is virtually complete and is in fair condition, with higher P/VP numbers coming out of Missouri, South Carolina, and Texas. Much better cotton conditions are currently found in Alabama and Louisiana. 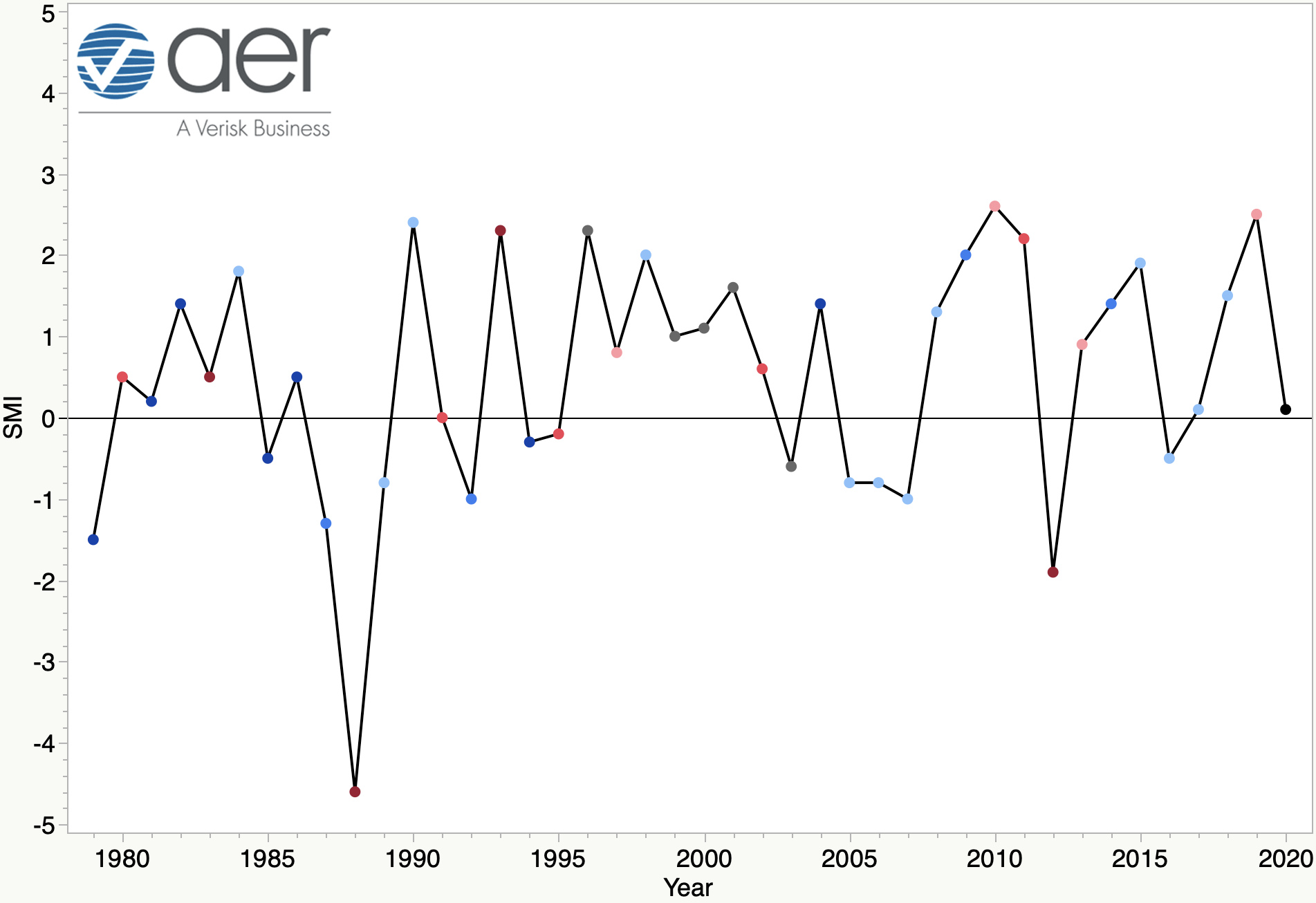 The current forecast for the national U.S. corn yield is a very slight improvement over the one from two weeks ago (16 June Ag Blog). Conditions for corn have mostly been good across the major corn growing regions of the U.S. so the likelihood of corn exceeding 180 bpa is quite high at the present time. Best one sentence summary: Conditions across the best growing states (e.g., Illinois) have been too good to expect sub-180 and the forecast looks too warm (as of now) to produce 190 bpa corn. The next unofficial yield forecast will be released with the Ag Blog on 14 July. The official AER corn yield forecast will be released in the first week of August, roughly a week ahead of the August yield estimate from NASS. 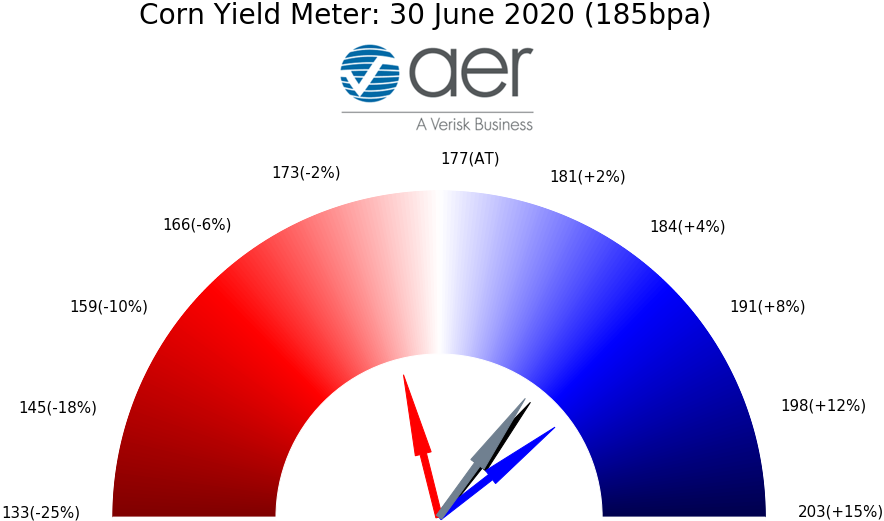 Figure 9. Current corn yield forecast. The black arrow (185 bpa) is the expected, the blue (red) arrows represent the best (worst) case scenarios and the gray arrow shows the position of the previous week.