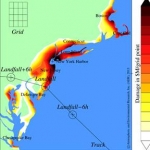 The NSF website reports on a new technique developed by AER scientists called exigent analysis (EA) that produces a forecast map of worst-case or “exigent” damages for a particular weather event based on an ensemble of forecasts.  For any chosen forecast confidence level, EA supplies an upper bound of the number of people and value of property that the storm would affect at each location.  The resulting exigent damage map gives the worst-case damage scenario for a given probability, or equivalently, the most likely pattern of damage for a given value of area-wide damage.

This research has direct application for emergency situations affecting life and property.  In advance of a disaster, emergency responders could use exigent damage maps as extreme but plausible scenarios, and agencies such as the Federal Emergency Management Agency and the Red Cross could use exigent forecasts to preposition resources and personnel.

Drs. Gombos and Hoffman applied EA to several recent major weather events including Superstorm Sandy (2012).  In the figure that appears at the SEE website and reproduced here, the left panel shows the ensemble mean forecast wind damage to households for Superstorm Sandy based on the ECMWF ensemble forecasts of 10-meter wind from 00 UTC 26 October 2012, approximately 96 hours before New Jersey landfall.  In the most likely scenario (left panel), total residential property damage is forecast to be $5.8B, with damage concentrated along the mid-Atlantic and New England coasts and Chesapeake and Delaware Bays.  The exigent damage at the 90% risk level (right panel) is greater than the most likely scenario at these locations and more inland penetration of damage in all areas north of the landfall location and especially near New York Harbor.  The total forecast damage for the exigent scenario is $16.5B.