The Western U.S. is experiencing a trend toward more frequent and larger wildfires, within an extended fire season, stemming from high temperatures combined with drought conditions.  Meanwhile, the wildland-urban interface expands by more than two million acres each year, according to the Dept. of Homeland Security, meaning that wildfires pose an ever-increasing threat to communities.

We turn to geostationary satellite technology as a means for addressing these challenges.  The GOES-R satellites provide a wealth of data supporting weather and environmental applications within an expanded set of spectral channels.  These data sets, updated over the Continental U.S. every five minutes, represent a major technological advancement over prior systems.  The GOES-R channel set includes the 3.9-micron band, which is optimized to provide sensitivity over an extended dynamic range, providing accurate readings from both cold and hot targets, including wildfires.

We leverage this geostationary observing capability in the development and deployment of our Fire Autonomous Detection and Dissemination System (FADDS).  Initially sponsored by US Space Force/SMC, in coordination with the US Forest Service, FADDS provides an automated system for the detection and real-time tracking of active wildfires throughout the United States.  FADDS uses a real-time feed of GOES-R observations as input, along with a cloud mask and radiometric characterization of the non-burning background, as provided by the AER-developed Unified Cloud Detection and Optimal Spectral Sampling algorithms, respectively.  FADDS provides quantitative information on wildfires including wildfire location, boundaries, intensity, temperature and effective burning area.

The Dixie and Caldor Fires were among the larger and more destructive events from the 2021 wildfire season.  Impacting more than 900,000 and 200,000 acres in northern California and the Lake Tahoe Region, respectively, these fires were notable for their unprecedented advance across the crest of the Sierra Nevada mountain range. 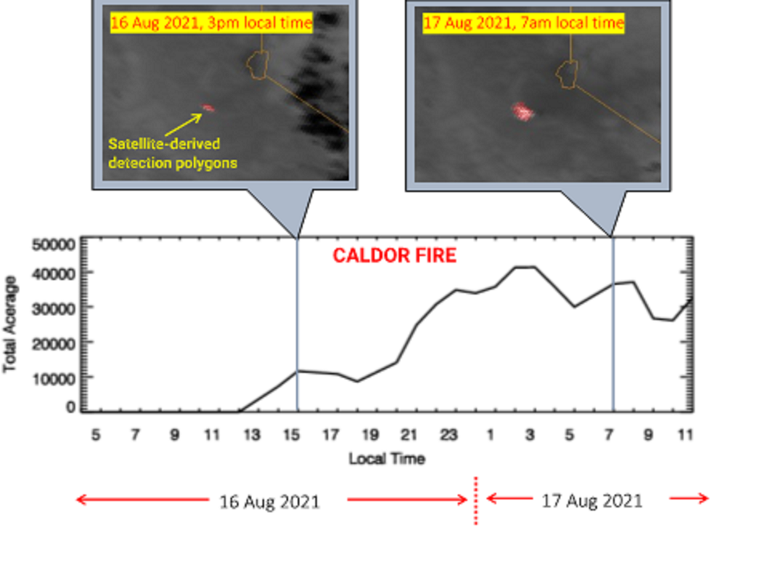 Dixie and Caldor fires areas of interest highlighted above. Left indicates FADDS monitoring of the Caldor fire during initiation and early growth stage

In the following animation, we view the early advance of the Caldor Fire as it rapidly expanded to larger than 40,000 acres, and we additionally note the sustained, widespread extent of the Dixie Fire.  The left panel shows a grayscale representation of the GOES-R 3.9-micron image.  Cold areas, including clouds and downwind smoke plumes, appear dark, while warmer features including wildfires are brighter.  The FADDS automated wildfire detections are depicted with colored symbols, representing detection confidence, with red/orange shades representing high confidence, green medium confidence, and blue the lowest confidence.  The right panel features a color-composite animation generated from the GOES-R multi-spectral observations, designed to contrast features such as clouds and smoke plumes from the land and ocean surface features.

(Right) This animation is for the same time period as the image on left, slightly zoomed out.  Multiple ABI bands are used to derive this product.