PBS Terra Weathered is a show hosted by meteorologist Maiya May and produced by Balance Media that helps explain the most common natural disasters, what causes them, how they’re changing, and what we can do to prepare.

AER's Dr Judah Cohen is interviewed in this show. 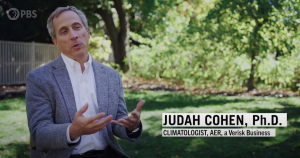 In 2015, Boston was brought to its knees by the worst winter on record, receiving an unprecedented 110 inches of snow. And over the last decade, the American Northeast has seen more than a 200% increase in the frequency of large, disruptive snowstorms. This trend surprised nearly everybody, including many of the top experts, as they had been expecting a warming planet to translate into milder winters. But in many locations, we have seen just the opposite. So what’s going on here?

PBS Terra traveled to Boston to search for answers about these surprising effects of climate change and their connection to the jet stream, the polar vortex, and a phenomenon known as “arctic amplification.” We also discuss some of the most common risks like hypothermia, frostbite, heart attacks, and traffic accidents that make winter weather, far and away, the deadliest natural hazard of them all.