Traditionalists and upstarts are facing off over the best way to forecast winter weather.

Newsweek's Sharon Begley, writes about Atmospheric and Environmental Research's (AER) extensive studies of Siberian snow cover done by the Director of Seasonal Forecasting, Judah Cohen. For the full PDF click the thumbnail below. 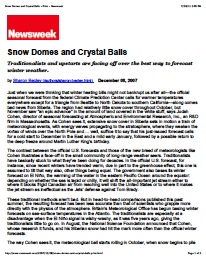 Highlights from the Newsweek article about AER's science underlying the AER Seasonal Forecast:

"In August, the National Science Foundation announced that Cohen, whose research it funds, and his Siberian snow had hit the mark more often than the official winter forecasts.

"The way Cohen sees it, the meteorological ball starts rolling in October, when snow begins to pile up across Siberia. The more snow, the more cold, dense air in the lower atmosphere, because the snow cools the air above it, and colder air is denser air. This mass spreads over northern Eurasia and pushes a wave of energy up into the stratosphere. That warms the stratosphere over the Arctic, pushing the river of air that is the jet stream south. The jet stream spills down the eastern face of the Rocky Mountains into the eastern half of the United States, explains Cohen. On a map, the jet stream then looks like a slide starting in the Rockies and dipping south as it travels east. With nothing to block them, cold air masses from the north easily dip well into the Midwest and East. Presto: a colder-than-normal winter. If the October snow cover in Siberia is less extensive than the historical norm, then reverse all the above."