If not for a fortuitous alignment of the earth’s electromagnetic field, a Valentine’s Day “gift” from the sun could have wreaked havoc on power and communications infrastructure. The sun ejected many flares between February 13 and 19, 2011, two of which disrupted the earth’s ionosphere, causing radio blackouts. Those flares released coronal mass ejections over three consecutive days. Clouds of charged particles converged at the earth nearly simultaneously. And the geomagnetic storms that resulted were strong enough for electrical power lines to experience voltage alarms. The potential effects of those events are also beginning to raise alarms in the insurance and reinsurance industry. 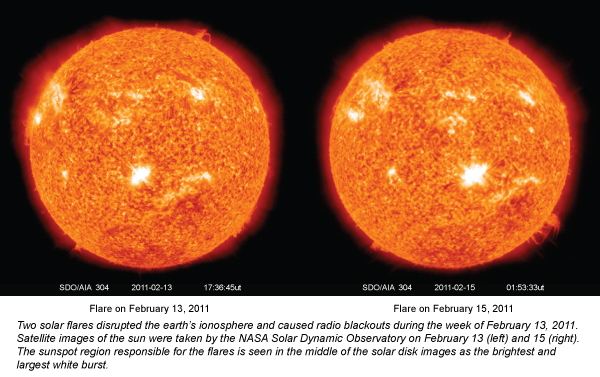 Risk managers are beginning to ask what a larger event would mean for their insurance coverages and asset portfolios. History has provided numerous examples of solar events causing regional blackouts, disrupting telegraph or telephone service, and halting radio communications. History, however, is not a good predictor of our current vulnerability. Our overwhelming dependence on electronic power, mobile devices, and satellite-based communication exposes us more than ever before. A large solar event today could be orders of magnitude worse than Hurricane Katrina. But are such events too rare to worry about? Perhaps not.

Unexpectedly strong solar events such as the February flares can affect the earth even during low activity periods of the solar cycle. (The average solar cycle lasts 10 or 11 years.) In fact, scientists are seeing increased solar activity much earlier than they anticipated. The threat will continue to increase for the next three years as we approach the peak of the current solar cycle.

Insurers and reinsurers are turning to the science community for answers about the extent and severity of effects that space weather could have on the industries they serve through the property/casualty insurance market. Below are some of the potentially vulnerable industries.

Increased geomagnetic field variations and strengths due to solar storms can cause power surges and outages at high-voltage electric transformers and along transmission lines. Extended and widespread outages can cause equipment breakdown, business interruption, and contingent business-interruption losses. The failures that occurred within the Quebec electric grid and subsequent blackouts throughout the northeast United States in 1989 and again in 2003 are recent examples. Metal-based oil and gas pipelines used to transport products long distances are also at risk.

Satellite and other space assets

Solar storms generate massive amounts of radiation and charged particles. The blasts from storms can shorten the lifetime of satellite electronics or disable payload operations, resulting in significant revenue loss.

An influx of charged particles from solar storms can impair or prevent ground-based and satellite communications. Such an event will disrupt operations for businesses that rely on continuous communication, including banking and finance, mobile phones, digital computing, and medical devices.

Repeated radiation exposures can increase flight crews’ long-term health risks and decrease the life of key airplane electronic components. Loss of airline communications and navigation can also occur, particularly for pole-crossing flights. Airlines will need to redirect their routes to ensure unhampered communications in the event of a solar storm, resulting in longer flights and more fuel use.

As we approach the solar maximum in 2013, it’s important that we translate our knowledge of vulnerabilities into actionable, quantitative risk assessments specific to our industry. Such information will provide the basis for risk transfer and mitigation measures throughout the insurance value chain. It can also facilitate an open and constructive dialogue with governments and industry regulators working to evaluate the risk of a catastrophic solar storm.

James M. Griffin is a staff scientist in the Verisk Analytics subsidiary for Atmospheric and Environmental Research (AER). AER has studied the physical basis of geomagnetic field variations for more than three decades. Its work provides decision tools for government agencies and aerospace firms to address the operational effects of space weather on communications, navigation, and satellite systems.