Government agencies, satellite and other space asset operators and designers, and power grid operators use the Disturbance Storm Time (Dst) index to analyze the strength and duration of geomagnetic storms. Dst is a measure of the decrease in the horizontal component of the Earth’s magnetic field near the magnetic equator due to increases in the magnetospheric ring current (see the FAQ below). Values less than −50 nanotesla (nT) indicate high geomagnetic activity.

The original Dst index is provided by the World Data Center for Geomagnetism, Kyoto, Japan. The index is produced at an hourly cadence using temporal and spatial averaging from four low-latitude ground observation stations. The Kyoto Dst is frequently updated within a few hours of its initial value, and it occasionally goes off-line for periods of hours or days.

It is desirable to have U.S.-based real-time alternatives to the Kyoto Dst, particularly during gaps in its availability, which is our motivation for the space-based AER Dst. A similar Dst proxy is provided by the U.S. Geological Survey’s Geomagnetism Program in the form of a one-minute resolution ground-based alternative to the Kyoto Dst. The University of Oulu, Finland produces another real-time alternative, the Dcx index, which improves upon Dst by correcting for individual station latitude and removing seasonal quiet-time variations.

The following plot contains data for the 2003 Halloween super storm with a range of activity levels indicated by the shaded regions. Different researchers may define alternative categories, but the typical cut-off for studies concerned with the effects of geomagnetic storms on power grids and satellites is Dst less than -200 to -300 nT, regardless of the terminology. Compare the quiet-time behaviour on the left side of the plot with the super storm on the right, and keep these ranges in mind when viewing the current Dst data. 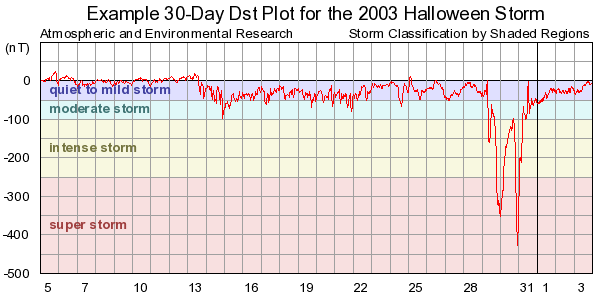 Data are presented with day of the month on the horizontal axis (October 5 through November 3 in this example), and the transition to a new month is indicated in our plots by a dark vertical line (between 31 and 1 here). For more super storm examples, see the FAQ below.

The AER Dst's most current data are shown below. 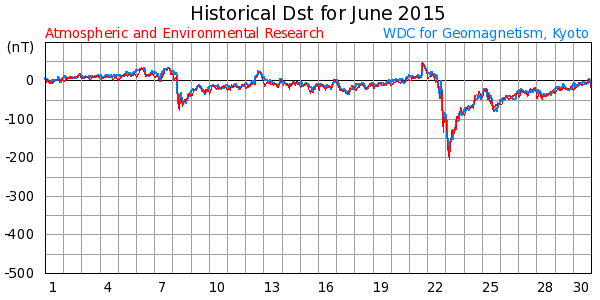 What is the ring current, and why does an increase in ring current produce negative Dst values?

The ring current is a westward flowing ion current (mostly protons) in the equatorial plane at a distance of about 3-5 Earth radii. Because of the obvious visual effects, most people who live in mid- to high-latitude regions are familiar with the fact that increases in solar activity can enhance the aurora. Similarly, solar flares or coronal mass ejections inject additional particles into the ionospheric ring current.

Consider the typical analogy of the Earth’s magnetic field to a bar magnet. The field lines of the magnet leave its north pole (which is near the geographic south pole), curve around past the equator, then enter at its south pole (near geographic north). If this seems counter-intuitive, recall that the north pole of a compass points at the geomagnetic south pole, so the north/south labelling convention comes from the compass needle, not the Earth itself. The field lines from Earth’s internal magnetic field thus point northward near the equatorial plane. The ring current also induces its own magnetic field just like the electromagnet in an electric motor. The direction of the field inside the ring is determined by the “right-hand-rule”: imagine a right hand with the palm facing a globe and fingers pointing westward, then the thumb is pointing down or southward against the Earth’s dipole field. The magnitude of the total field then decreases when the current in the ring increases, and this is what is reported as the Dst index.

How does the AER Dst differ from the Kyoto Dst, and what are some of its advantages?

The AER Dst is based on spaced-based measurements, so while it should produce results similar to the Kyoto Dst, any differences may be indicative of recent changes in the ionosphere that are relevant to communication and navigation satellites. The Kyoto Dst is determined from ground-based magnetometer measurements, and care must be taken to eliminate local effects due to ground currents. The AER Dst uses magnetometer measurements from the Defence Meteorological Satellite Program (DMSP), which are provided in near real-time through a cooperative research and development agreement from the Air Force Weather Agency (AFWA).

In addition to the issue of locating suitable observational sites spaced evenly around the globe in longitude, there is another problem that dictates the range of usable latitudes for the Kyoto Dst. The ground based measurements are attempting to measure the change in the magnetic field magnitude near the magnetic equator, but they must be chosen away from the equator (about ±20-35°) to avoid the equatorial electrojet, a narrow low-altitude band of eastward flowing current that is present near local noon (this ionospheric current is unrelated to the magnetospheric ring current). Stations located near the equator would see induced fields from the electrojet of ~60 nT at noon, but avoiding that problem by using stations away from the equator then requires adjustments to the measurements to obtain the equivalent equatorial reading. The DMSP orbital altitide is ~840 km, well separated from the 100-130 km altitude electrojet, and they are also in high-inclination, sun-synchronous orbits which means their northward (evening) and southward (morning) equatorial passes occur at constant local times. Since these crossings are consistently several hours away from local noon, the AER Dst can use the actual equatorial crossings where the change in magnetic field magnitude defines the Dst index.

The calculation of the change in the magnetic field during increased magnetic activity requires a method of defining its “normal” state during relatively inactive periods. The baseline for the Kyoto Dst is determined by measurements made during statistically quiet days. This results in a sequence of adjustments from “Quicklook” Dst values to “Provisional” (several years delay) and eventually “Final” values (after about eight years) as the quiet days are determined by hindsight. The AER space-based Dst uses the International Geomagnetic Reference Field (IGRF) as its baseline, computing raw change in magnitude from this model and applying a pre-determined calibration. Because of this approach all but the most recent data remain unchanged (incoming values can alter the composite average within ~1 hour of the most recent data depending on the ordering of satellites’ equatorial crossings, see below).

Finally, preliminary results suggest that the AER space-based Dst often exhibits a lead in features with respect to the most immediate real-time values of the Kyoto Dst, but further study is required to determine if these anecdotal cases represent a true increase in warning time for users of the Dst index.

How is the calibration applied to raw data?

At the start of each month, a new set of calibrations is calculated using quiet-time data from the previous three-month period. The data is fit by the longitude of the equatorial crossings (using a Fourier series with four sine and cosine terms). The constant term in the fit is selected to match the AER and Kyoto quiet-time baselines for the calibration data set. The purpose of the calibration is to account for differences in the evolution of the actual quiet-time magnetic field and the IGRF model baseline. Two calibrations are made for each satellite; one for each of the northward and southward equatorial crossings.

How is Dst computed from the equatorial crossing data?

The calibrated values for the change in magnetic field magnitude are ordered chronologically, and a rolling average for all four current DMSP satellites is performed. This smoothing results in a composite Dst value similar to the temporal and spatial averaging that is performed for the Kyoto Dst. Because of asymmetry in the ring current, the northward (evening) pass data is typically more negative than the southward (morning) pass data, so care is taken to include both directions for each satellite. If one of the passes is missing, that satellite’s opposite direction crossing is omitted from the current composite point.

What are some of the timing effects of the AER Dst?

The goal, of course, is to provide results as close to true real-time as possible. Currently, the AER Dst is delayed ~2 hrs from real-time, compared with Kyoto Dst values which are available hourly but are frequently updated several hours after their initial postings. Several factors affect the timing of the data and the delay between individual measurements on board the satellites and the update of composite value on this website:

The program is run at a half-hour cadence, typically processing 1 or 2 single orbit files, resulting in 2 or 4 new composite values per update.

The natural resolution of the data is determined by the DMSP orbital period (~102 minutes with 2 equatorial crossings per orbit) and the number of current DMSP satellites (4): 102/(2×4) ≈ 12.75 minutes.

The total latency is defined by the delay between real-time and the time stamp of the most recent AER Dst value. The time between on-board measurement (including the fact that the last equatorial crossing can be as much as a half-hour from the end of the file) and ingestion of the data file from AFWA approaches one hour. The averaging of composite values also averages the times of the crossings, which creates a Dst composite time stamp ~1/2 period earlier than the most recently processed equatorial crossing. Finally, the timing of ingestion of files within the half-hour window between program runs is effectively random. All of these issues contribute to the ~2 hr delay from real-time.

Note that the images and text files provided here are labelled by the most recent equatorial crossing in Universal Time (UT), not the averaged time stamp of the corresponding composite Dst.

How does the program perform for data from periods of higher solar activity?

The current format of DMSP data files dates back to mid-2001, which provides relatively easy access to magnetometer measurements dating to the most recent maximum in solar activity. The AER space-based program has been run on data for the six most geomagnetically active storms from this range. To view plots comparing the AER and Kyoto Dst for these storms, click here.

The new AER Dst proxy program is based on earlier AER codes that calculated data for individual DMSP satellite magnetic equator crossings but did not perform a composite averaging for a better comparison to the Kyoto Dst ground station averaging. This code was in turn based on the work of F. J. Rich.

The calibration algorithm of the AER Dst data uses older Kyoto Dst values to determine geomagnetically quiet periods. This technique and the longitudinal dependence of the calibration follow the prescription of W. J. Burke et al.