The plot below is an extension of the sample plot on the main AER Dst page. The vertical scale is the same, but the much “deeper” image contains lines indicating the peak values of two additional historical storms from March 1989 and September 1859. 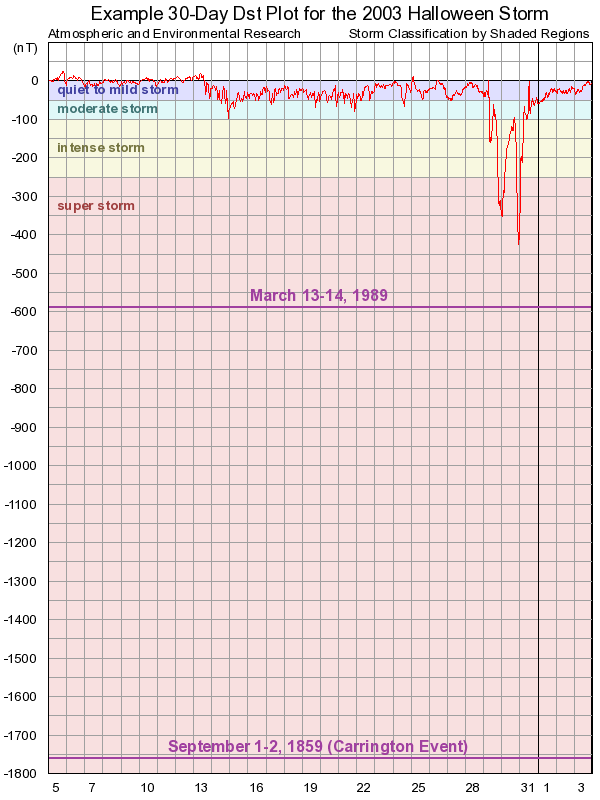 The Halloween Storm of 2003

The geomagnetic storm of late October through early November 2003 shown above was perhaps the storm with the greatest effect on human activity during the peak years of the last solar cycle. Long transmission lines (~1000 km) between sparsely populated areas act as better effective antennas and are thus particularly susceptible to induced currents from geomagnetic storms. In this case, damaged transformers led to system-wide power outages in Sweden. Throughout the northern hemisphere, airlines experienced communications problems that forced them to reroute high-latitude flights, and GPS navigational guidance from the FAA was lost for about 30 hours. Space walks from the International Space Station were also suspended due to the strong radiation storms associated with the Halloween event.

The March 1989 storm is the strongest on record since the official start of the Dst index in 1957. During this storm aurora were seen as far south as Texas. Induced currents brought down the Quebec power grid as protective relays were tripped in a cascading sequence. Six million people were without power for approximately nine hours despite additional assistance from external grids in Ontario and the north-east United States.

The magnitude of the Carrington event, named after the astronomer who recorded the solar flare that produced the storm, has been estimated from the speed of the magnetic cloud ejected from that solar flare and hand-recorded magnetometer data from a single monitoring station in Colaba, India. Even at this early date, most stations were recording magnetometer data on analog paper strips, but the instruments were “pegged” since they were not calibrated to account for a storm of such magnitude. During this storm, aurora were reported world-wide. Some telegraph operators were able to disconnect the batteries from their equipment and send messages using the geomagnetically induced currents in the telegraph wires. In other locations, there were telegraph outages or even fires started by sparking equipment. It is estimated that it would take years for modern society to recover from the damages to power infrastructure if such an event were to occur today.

During strong magnetic storms with steep onsets, the space-based Dst computation is particularly susceptible to the timing of the equatorial crossings. If one or more of the satellites happen to be crossing during the strongest peak of the storm, it can enhance the AER Dst peak magnitude relative to the Kyoto Dst which averages measurements over a full hour rather than the discrete values of the space-based composite. Similarly, if all of the DMSP satellites happen to cross well away from the “true peak” of the storm, the AER Dst can produce a lesser magnitude than the ground-based Kyoto Dst index. During the recovery period, when the ring current and magnetic field are changing less rapidly, the AER Dst tracks the Kyoto Dst approximately as well as during magnetically quiet periods.

Each of the monthly storm plots below is followed by a 10-day “zoom” focusing on the time period of interest. The plots are labelled by day of the month, and dark vertical lines in the 10-day images indicate month boundaries. 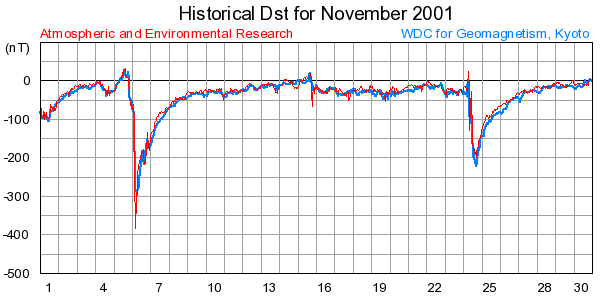 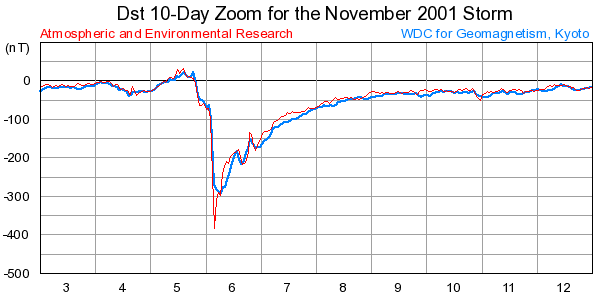 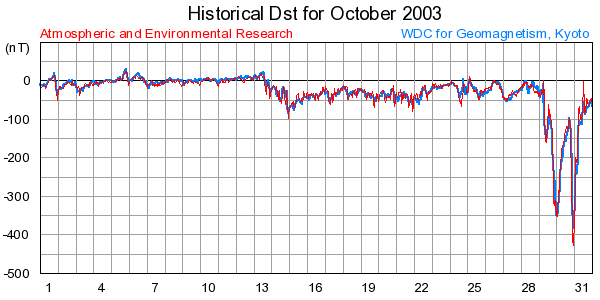 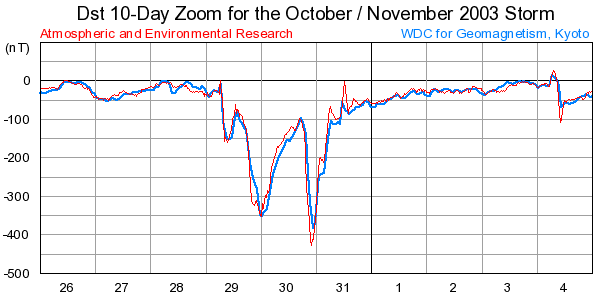 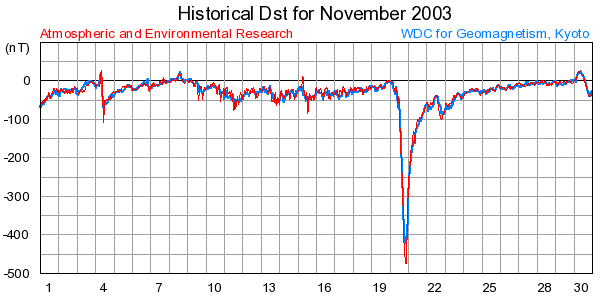 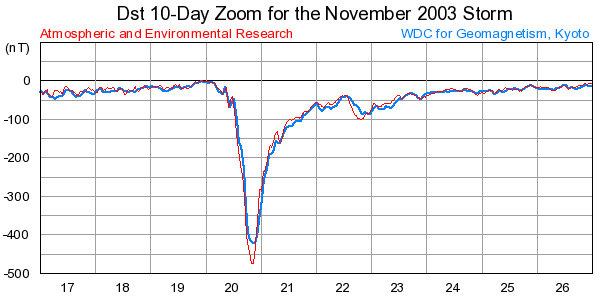 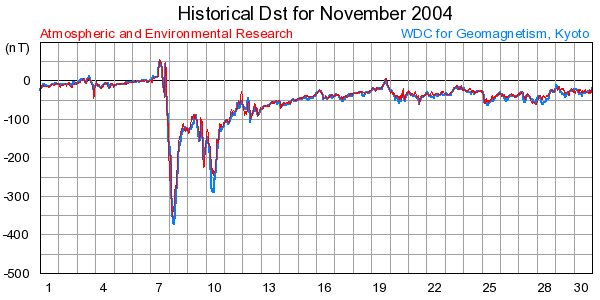 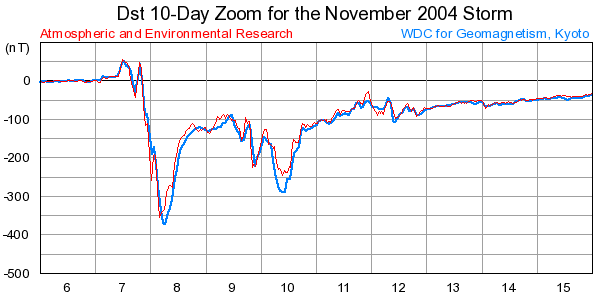 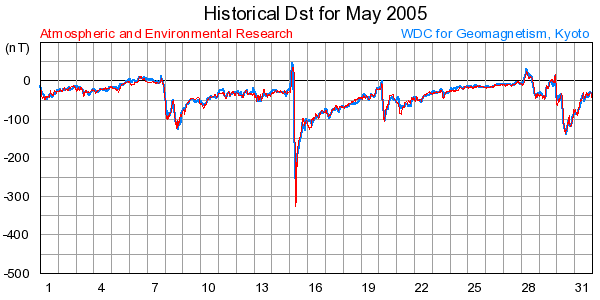 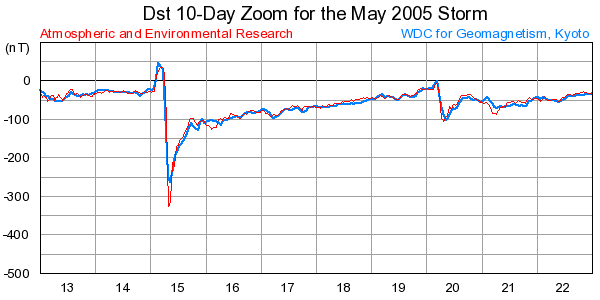 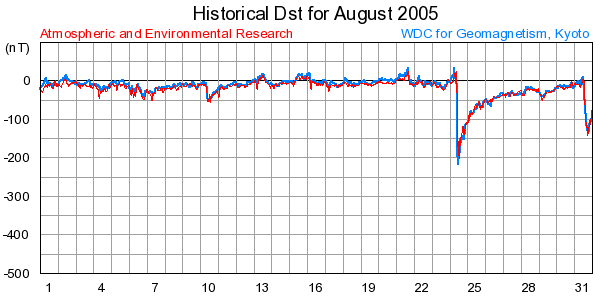 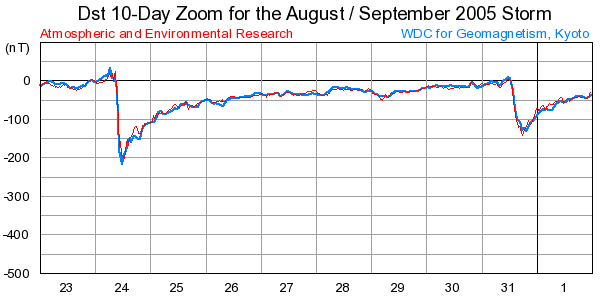