This week’s Ag Blog has good news and bad news. The good news is two of the areas I’ve been watching for further drought development had some improvement over the past week. Those include North Dakota and parts of New England, specifically downeast Maine and New Hampshire (Figures 1-3; Table 1). The rainfall was probably especially helpful for the spring wheat crop in central and western North Dakota. Overall, the Great Plains North region saw a modest increase in the median SMI to -1.1 over the past week and the northerly position of the jet stream should help keep drought expansion at bay for now in the northern part of the region.

The bad news is the improvement in late June across parts of the Great Plains South region was short-lived. Table 1 shows that almost a third of the region has an SMI below -3.0, an increase of 14 percent from last week’s Ag Blog, and the U.S. Drought Monitor still shows extreme drought over eastern Colorado and western Kansas. The upcoming forecast for precipitation (or lack thereof to be more precise) and heat will likely lead to further acceleration of flash drought across this region, with further expansion likely in parts of central and eastern Oklahoma. Moving much further to the northeast, not all of New England had improvement as of last Thursday, though Figure 4 would suggest that more improvement is likely in next week’s maps.

Across the Corn Belt, the median SMI remained on the slightly positive side of 0.0, where it has been for most of the season. There are no areas of major concern just yet but some places are worth watching. Some parts of central and northern Illinois have been on the dry side over the past few weeks and also a bit warm of late. While this area is generally blessed with wonderful soils, corn grown in replanted fields or fields with drainage issues in the spring may have issues if rain doesn’t materialize later this week. I will be watching the ESI (Fig. 5) and QuickDRI (Fig. 7) maps in comparison to the VegDRI (Fig. 6) maps very carefully over the next six weeks and recommend you do too if you have an interest in corn and soybean.  The difference is VegDRI is geared more toward longer-term stress while the 1-month ESI and QuickDRI are geared to help pick up rapid development of drought (i.e., flash drought). The specialized VegDRI crop map is not bullish on water stress in the central and eastern Corn Belt, while QuickDRI is. If the current signal of drier conditions in QuickDRI and the ESI continues to show up in places like central Illinois, that would indicate evidence of water stress and reduced yield. Further west, much of Nebraska was on the dry side going into the holiday weekend but some of southern and western Nebraska did pick up a decent rain on Thursday night. The eastern section of the state also picked up significant rainfall last Wednesday morning along the I-80 corridor, which helped bring needed moisture going into pollination. The western third of Iowa is also another area worth watching as pretty much all ag climate indicators are showing dry conditions but given the deep, loess soil over much of that area, as long as rainfall comes in a somewhat timely manner the rest of the season, I suspect they will be ok.

The southeastern U.S. had an increase in the median SMI to 1.3 and the forecast for the next several days likely will help keep areas moist or bring improvements to places like southern Georgia. The recent pattern has also been seasonally wet for parts of the northwestern U.S., especially across western Montana. This should be good news for the wheat farmers and for keeping forest fires in the northern Rockies minimal this season, or so we can hope. 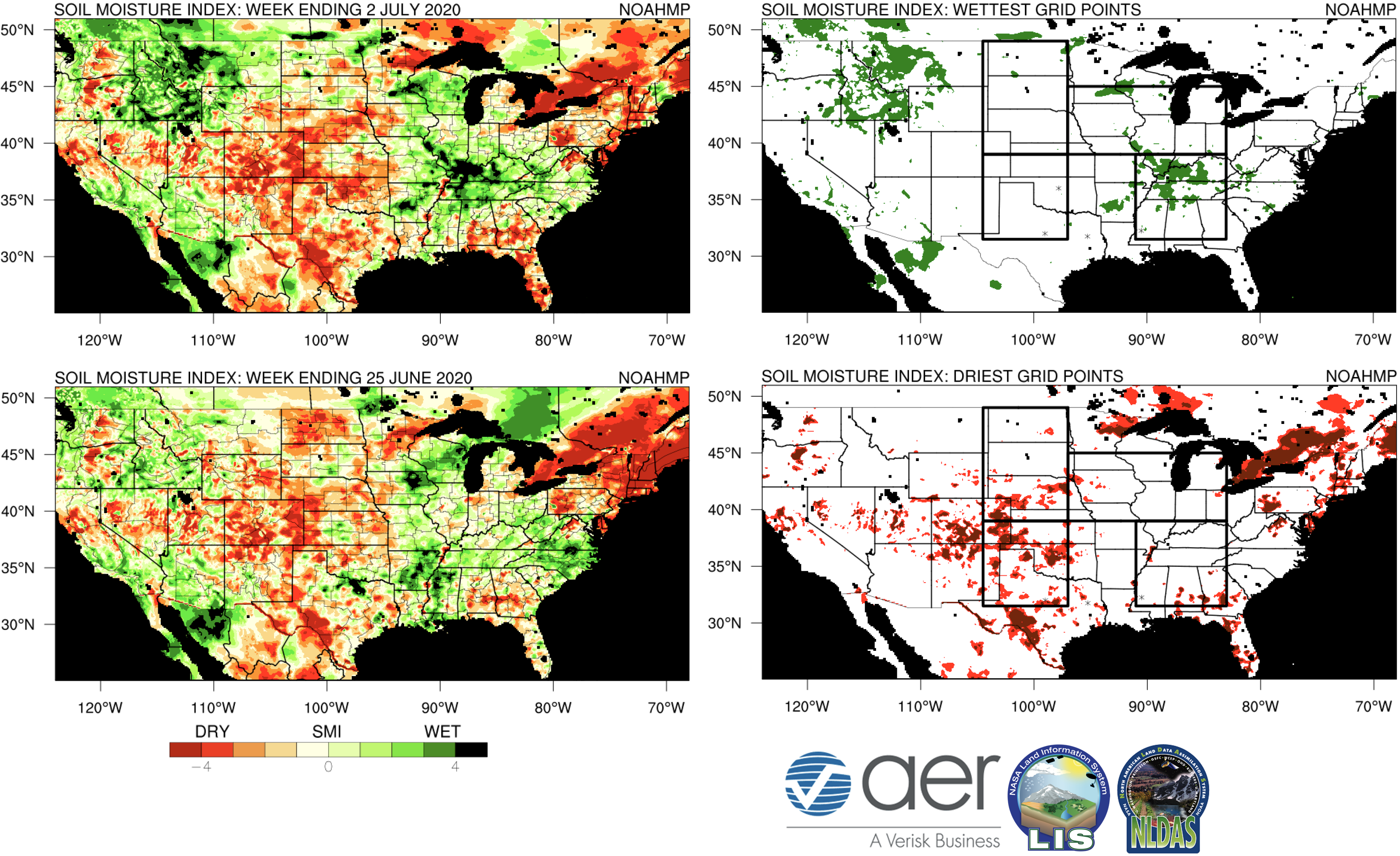 Figure 1. The Soil Moisture Index (SMI) for the 7-day period ending 2 July 2020 (top left) and 25 June 2020 (bottom left). On the right hand side are the grid points where the SMI is at or above 3.0 (top right, green) and grid points where the SMI is at or below 3.0 (bottom right, red).  Results are based on output from the 0-1 m (surface to 3.23 feet) layers in the Noah-Multiparameterization (Noah-MP) land surface model. Noah-MP is run in the NASA Land Information System (LIS) framework with the North American Land Data Assimilation Version 2 (NLDAS-2) forcing dataset. The SMI calculation is based on the soil moisture index created in Hunt et al. (2009) such that ‘5’(dark green) is the wettest and ‘-5’ (dark red) the driest for the period of record.  The period of record used calculate the SMI for the current map is 1979-present. 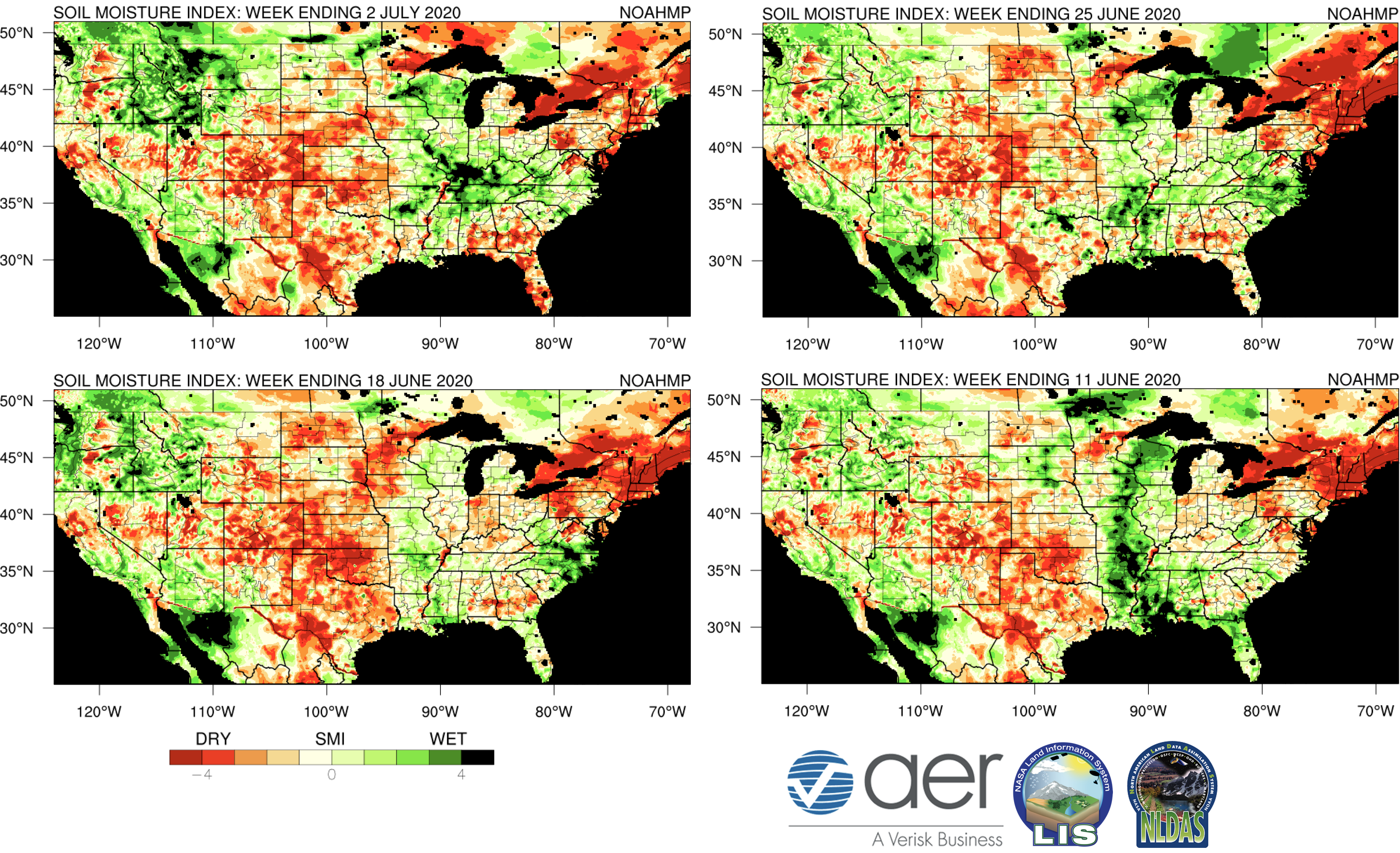 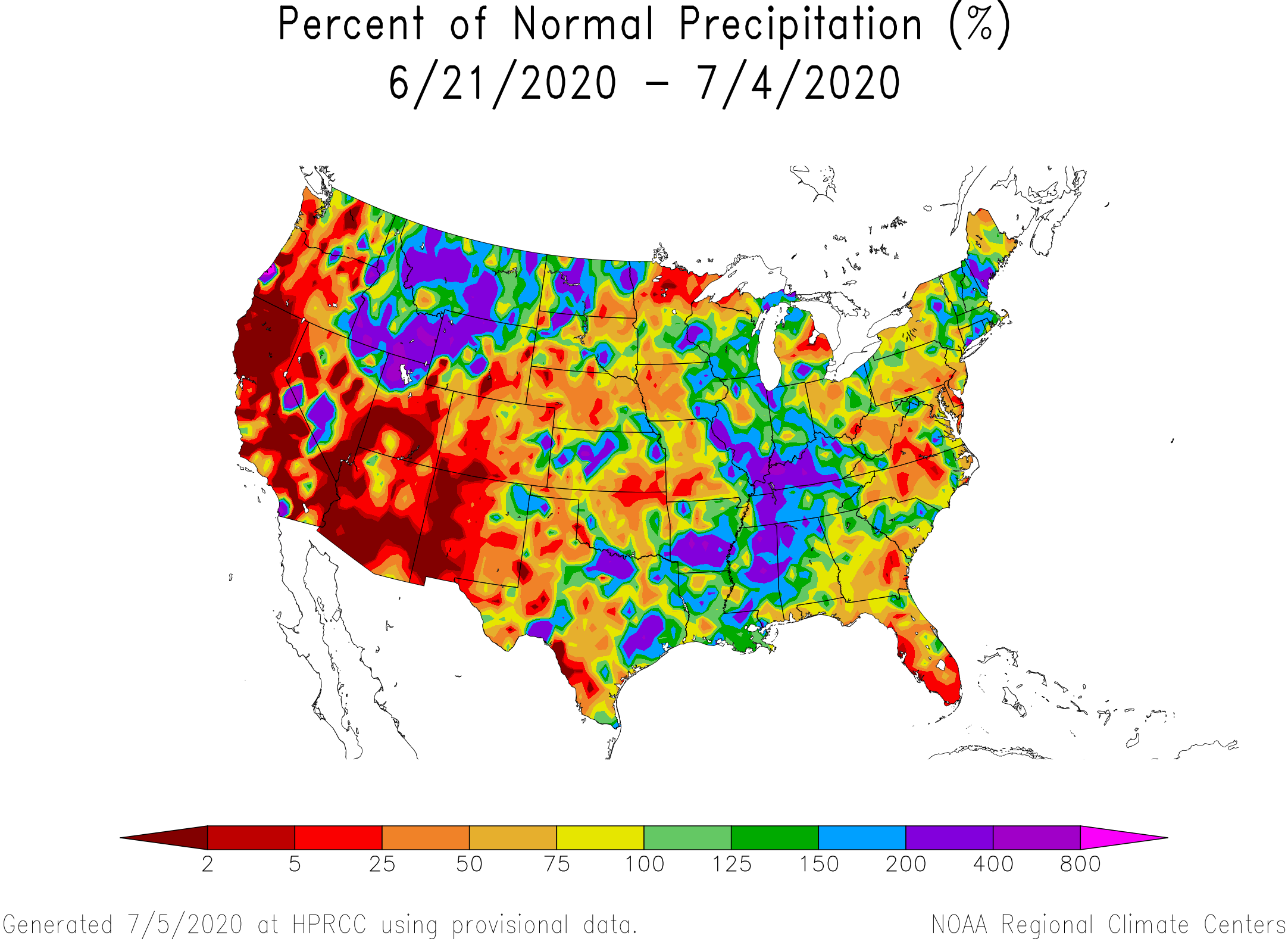 Figure 4. Percent of normal precipitation over the past 14 days (through Saturday 4 July).  Map courtesy of the High Plains Regional Climate Center. 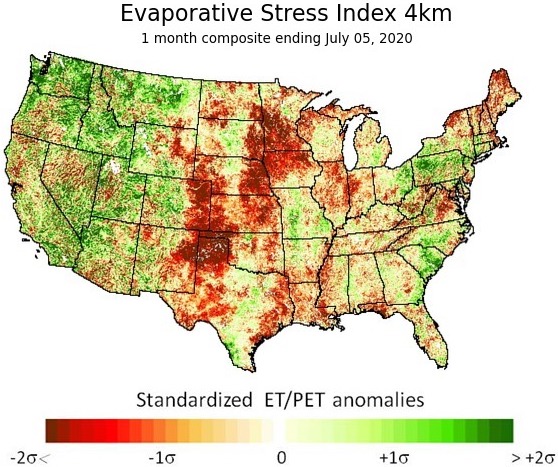 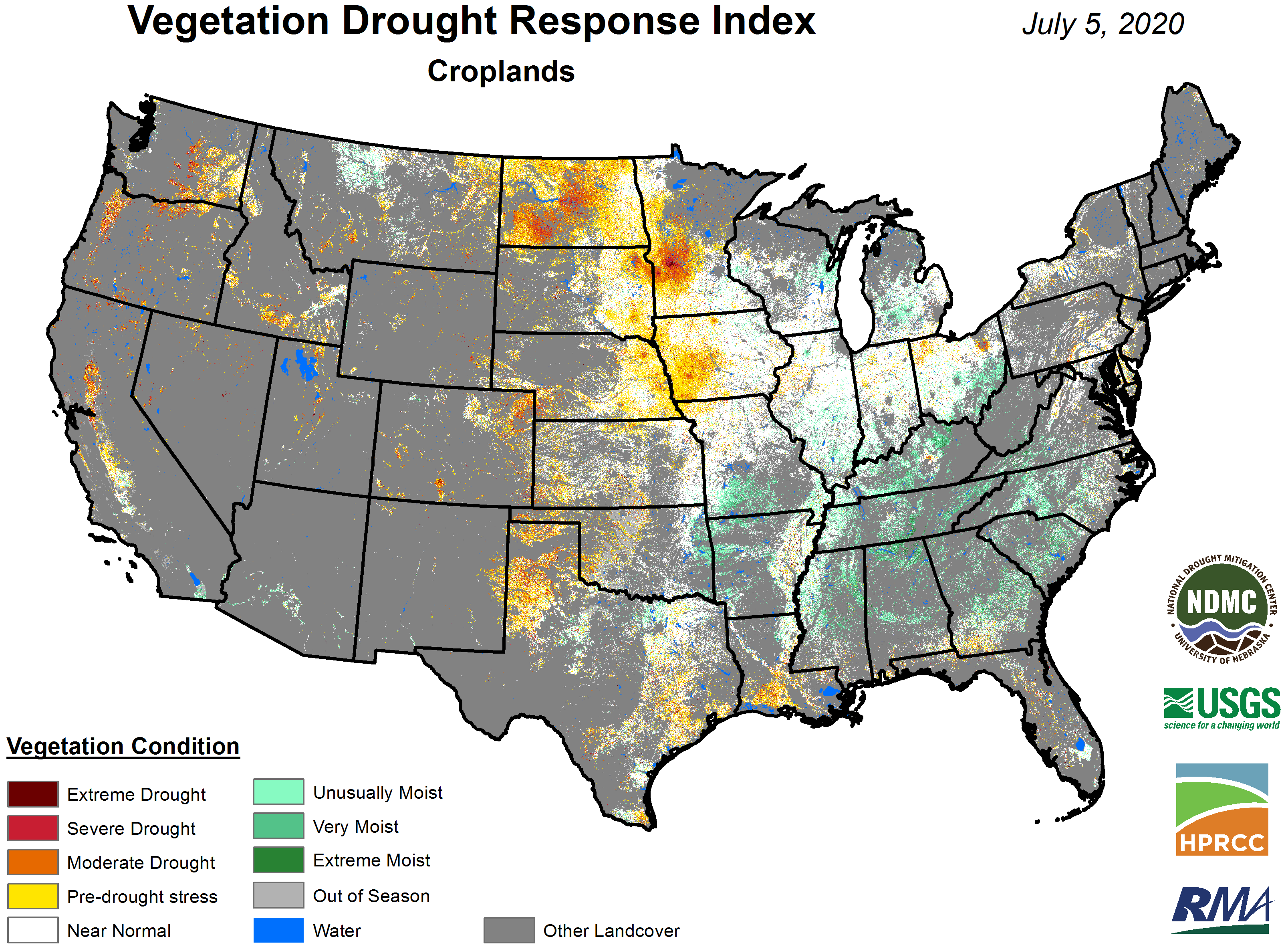 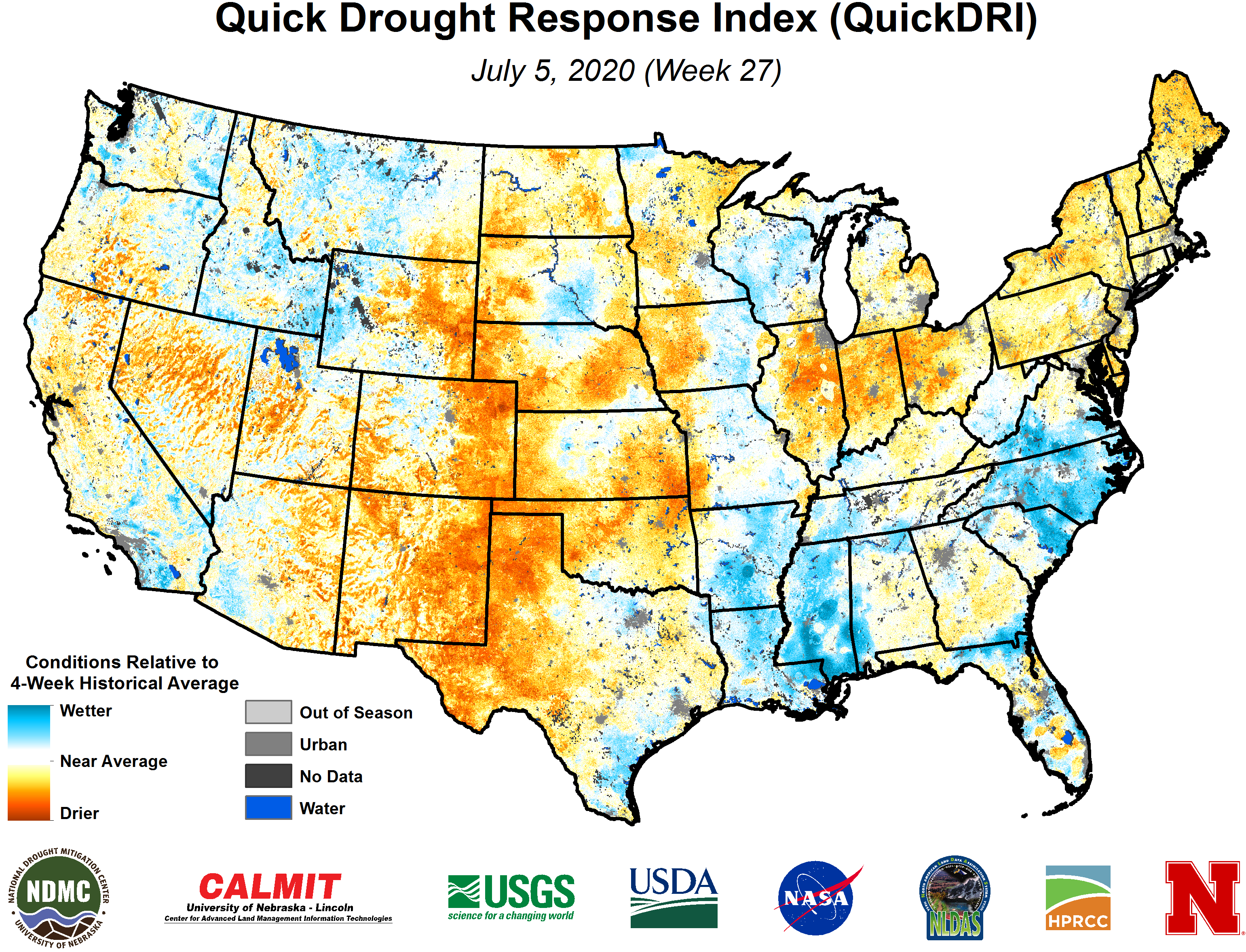 According to the latest Crop Progress Report, U.S. corn is currently rated at 71 percent Excellent/Good (E/G) against 6 percent Poor/Very Poor (P/VP), a slight decline over last week but still on the better side of the historical range. Figure 8 shows that the median SMI of the Corn Belt remained just above 0.0 and continues to be in the same range as recent years (e.g., 2014, 2016-2018) that finished above trend. Corn pollination is well under-way in the southern U.S. and is starting in parts of the Corn Belt. Soybean numbers remain unchanged from last week at 71 and 5 percent respectively. The winter wheat harvest is essentially complete in Oklahoma and Texas and good progress continues to be made in Kansas. Over 60 percent of the spring wheat has headed in the northern U.S. and 70 percent of it is E/G, a slight improvement from last week. Cotton conditions continue to be mostly in good to fair condition, with higher P/VP numbers coming out of Missouri and Texas. Best cotton conditions are currently found in Alabama and Louisiana. 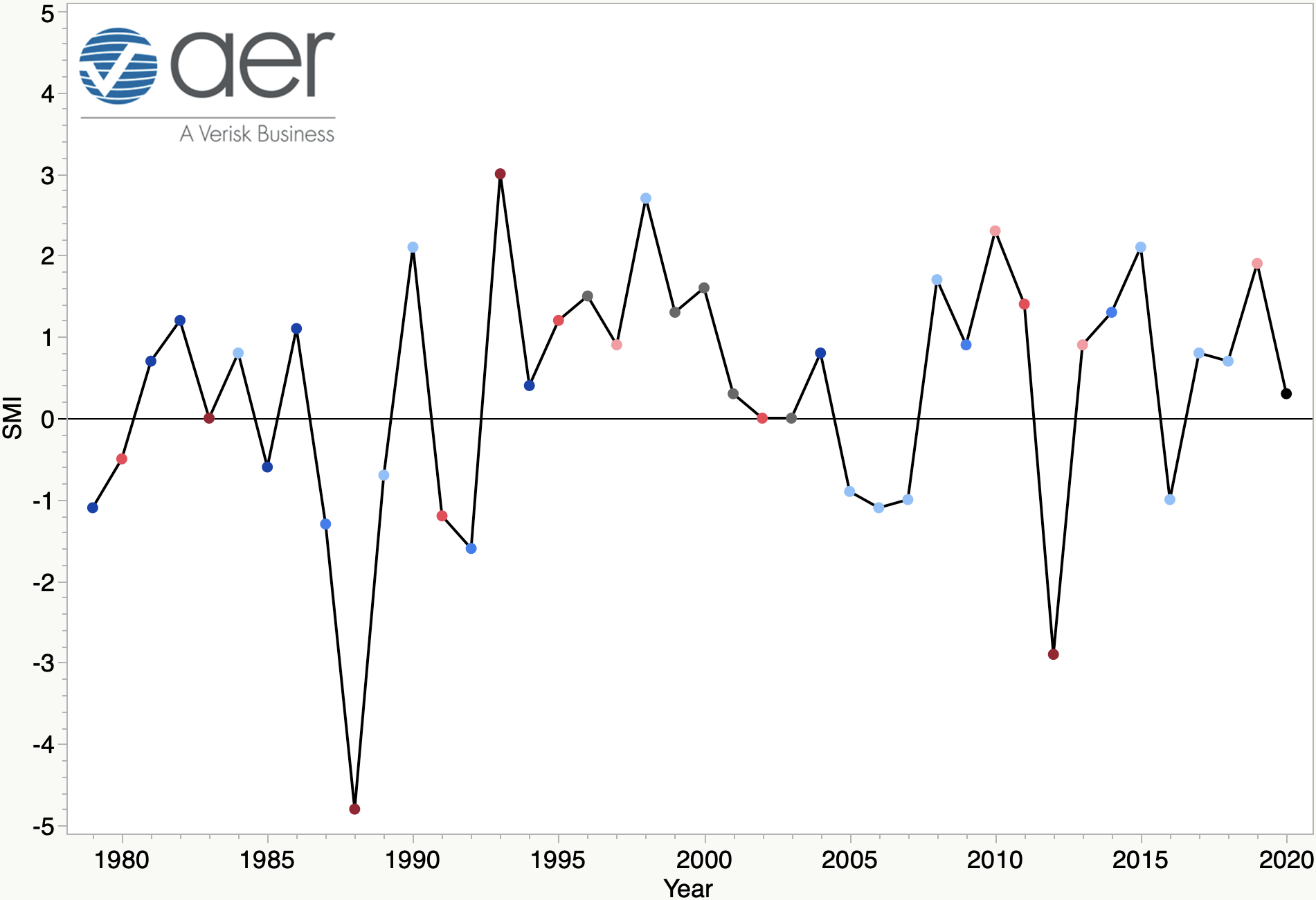