Remnants of Tropical Storm Cristobal paralleled the Mississippi River closely last week, leaving abnormally moist soils from along the Gulf of Mexico northward to the shore of Lake Superior (Figures 1 and 2). Elsewhere soil moisture conditions generally held steady or declined a bit. The decline in the SMI was most apparent over south central Kansas, central Oklahoma, and the heart of Texas. This area is adjacent to an area of longer-term drought (Fig. 3) over the central/southern High Plains and is now in what some of my colleagues would classify as a “Flash drought watch”, which means recent conditions and the expected forecast are favorable for flash drought to verify within the coming weeks. Table 1 shows that the percentage of grid points in the LIS run with an SMI less than -3.0 (bottom right of Figure 1) increased to 33.5 percent, more than triple what it was just two weeks ago. Given the continued hot, dry, and windy weather, my guess is over 50 percent of the domain will meet that category at this time next week. Much of this recent decline is over the prime winter wheat belt of Oklahoma and Kansas, though at this late stage in the game for winter wheat, the recent rapid decline in soil moisture may have done more to expedite harvest than hurt yield. The recent decline in soil moisture could be harmful to rainfed cotton in that region.

Further to the north, the month of June has been off to a near-record warm start in parts of eastern Nebraska, western Iowa, southeastern South Dakota, and southwestern Minnesota, with the 90°F days already piling up and temperature anomalies running in excess of +8-10°F so far in June (Figure 4). Storms on Tuesday and Wednesday of last week did help to offset some of the drop in the SMI that occurred early last week and the previous weekend in the first round of heat. The current heat in the western part of the Corn Belt have also been accompanied by persistent southerly winds and lower dewpoints, so there is no doubt soils have dried further since the cutoff for the map. The good news is it’s still the first half of June (i.e., conditions like this are probably knocking down some top yield potential but still less harmful now than around pollination) and a slow moving cold front later this week should stall near the KS-NE border for a few days later this week and lead to seasonable temperatures and repeated chances for rain. So it’s too early to hit the panic button on drought in this area but… if rain does not materialize over the region between Wednesday night and Sunday, it will be the next area getting a flash drought watch.

The central and eastern portions of the Corn Belt had more much favorable conditions the past several days than say west of Des Moines, so even places that missed out on a soaking from Cristobal are still in good shape. The forecast going forward also looks favorable for development of corn and soybean and overall, and it’s shaping up to be a pretty solid year thus far for most locations in the traditional ‘I’ states. Figure 5 shows that the median SMI of the entire Corn Belt (as of last Thursday) was 0.2, comparable to values in 2014-2018, which all ended up being good years overall. Still a long way to go this season but conditions are much better than last year at this time when some people were still planting.

Another area of concern is New England, which remains very dry with most locations having an SMI below -3.0. But unlike in the Plains, conditions have been on the cooler side thus far this month and vegetation stress does not appear to be severe just yet (ESI, Fig. 6). Nevertheless, if the lack of rain continues into the summer it will negatively affect the forested ecosystems and small farms. The western U.S. also showed increasing dryness, which could lead to enhanced risk of forest fires if another abnormally warm summer comes to fruition. 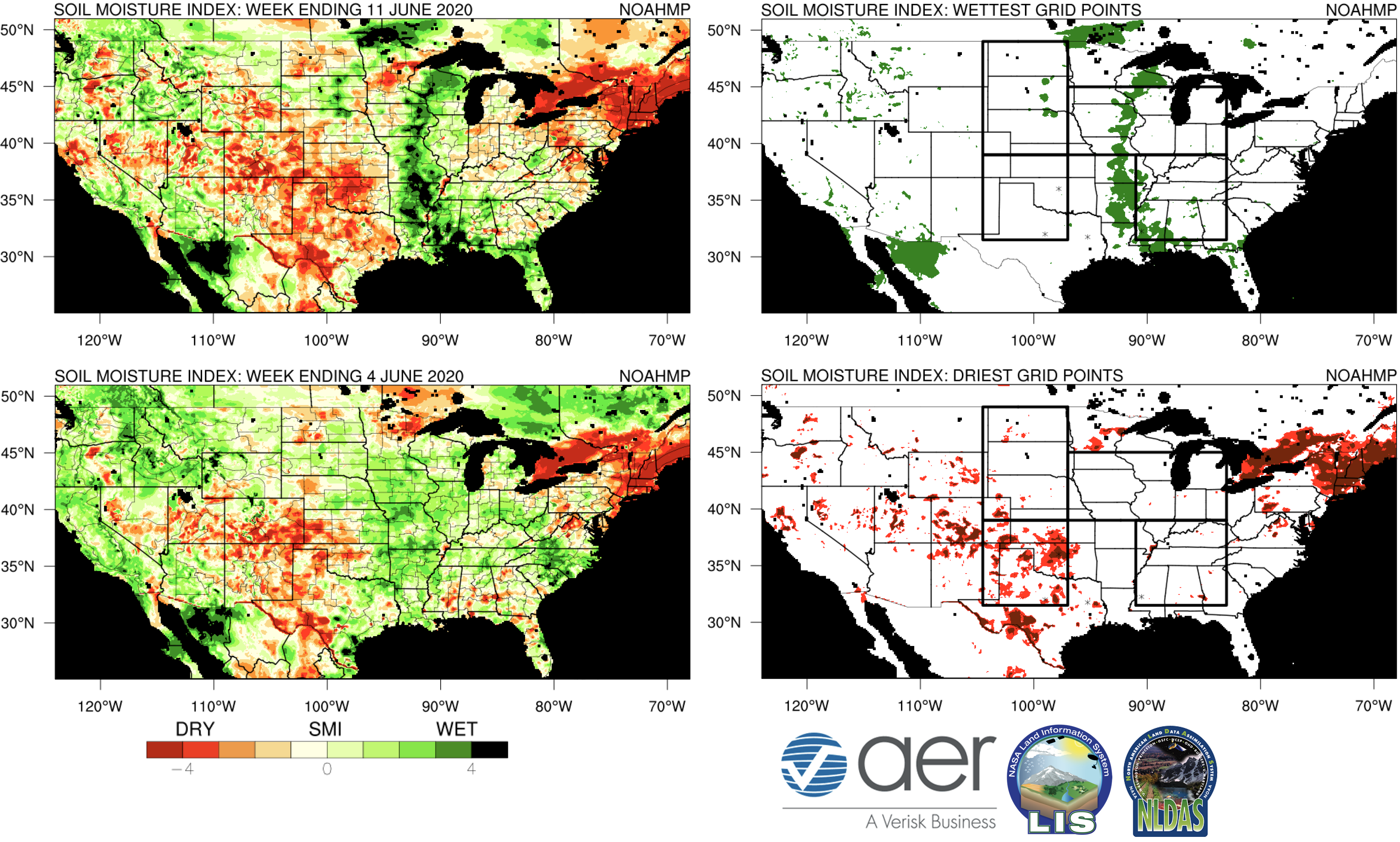 Figure 1. The Soil Moisture Index (SMI) for the 7-day period ending 11 June 2020 (top left) and 4 June 2020 (bottom left). On the right hand side are the grid points where the SMI is at or above 3.0 (top right, red) and grid points where the SMI is at or below 3.0 (bottom right, red).  Results are based on output from the 0-1 m (surface to 3.23 feet) layers in the Noah-Multiparameterization (Noah-MP) land surface model. Noah-MP is run in the NASA Land Information System (LIS) framework with the North American Land Data Assimilation Version 2 (NLDAS-2) forcing dataset. The SMI calculation is based on the soil moisture index created in Hunt et al. (2009) such that ‘5’(dark green) is the wettest and ‘-5’ (dark red) the driest for the period of record.  The period of record used calculate the SMI for the current map is 1979-present. 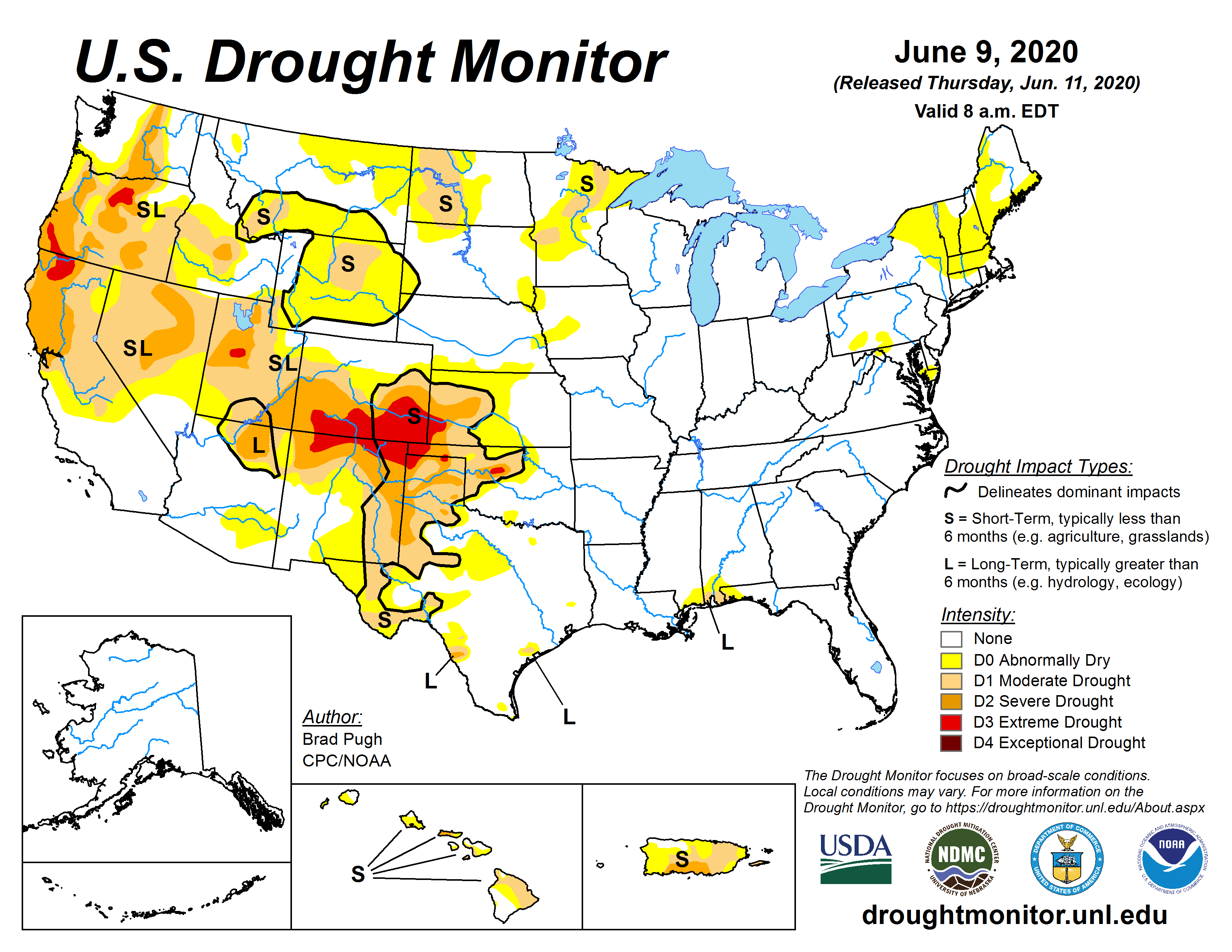 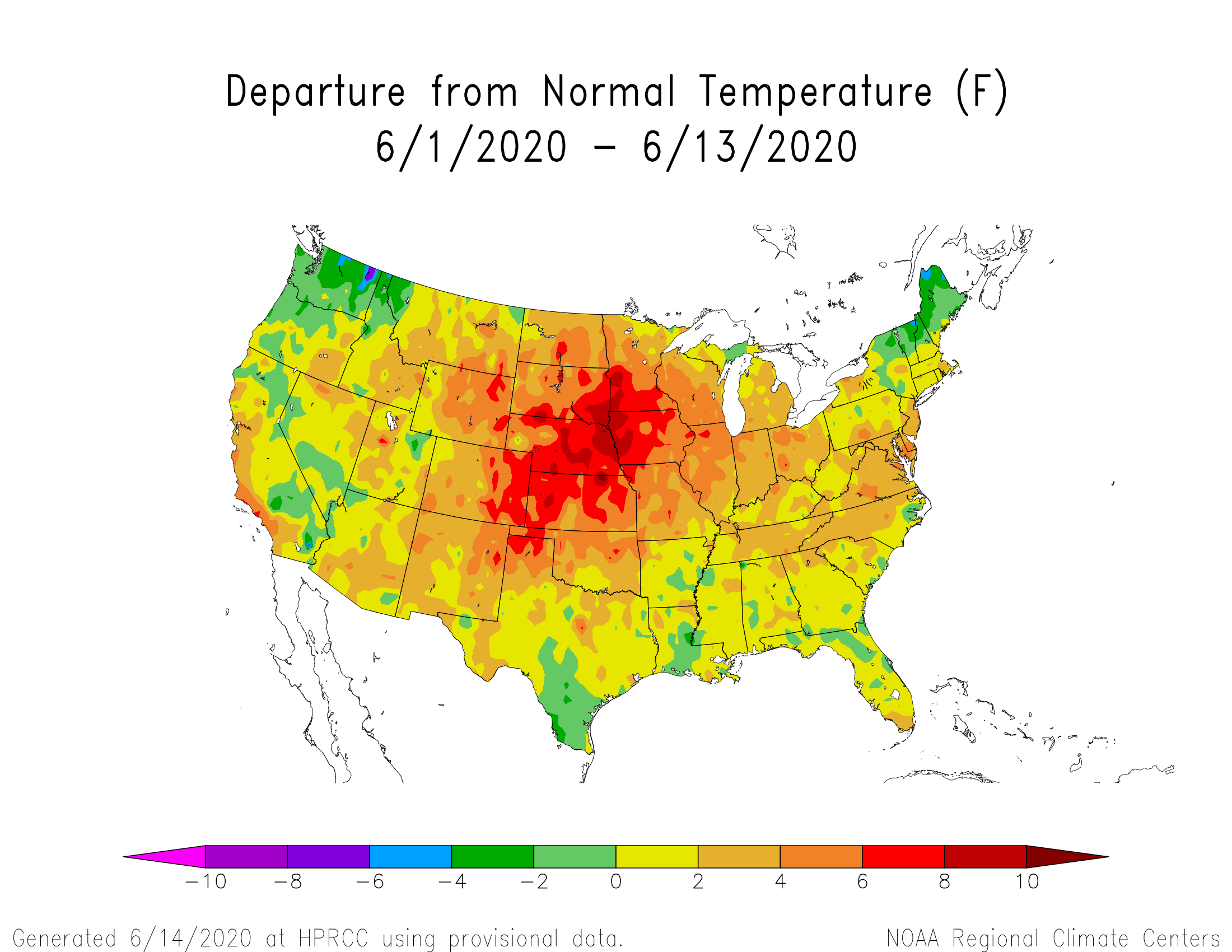 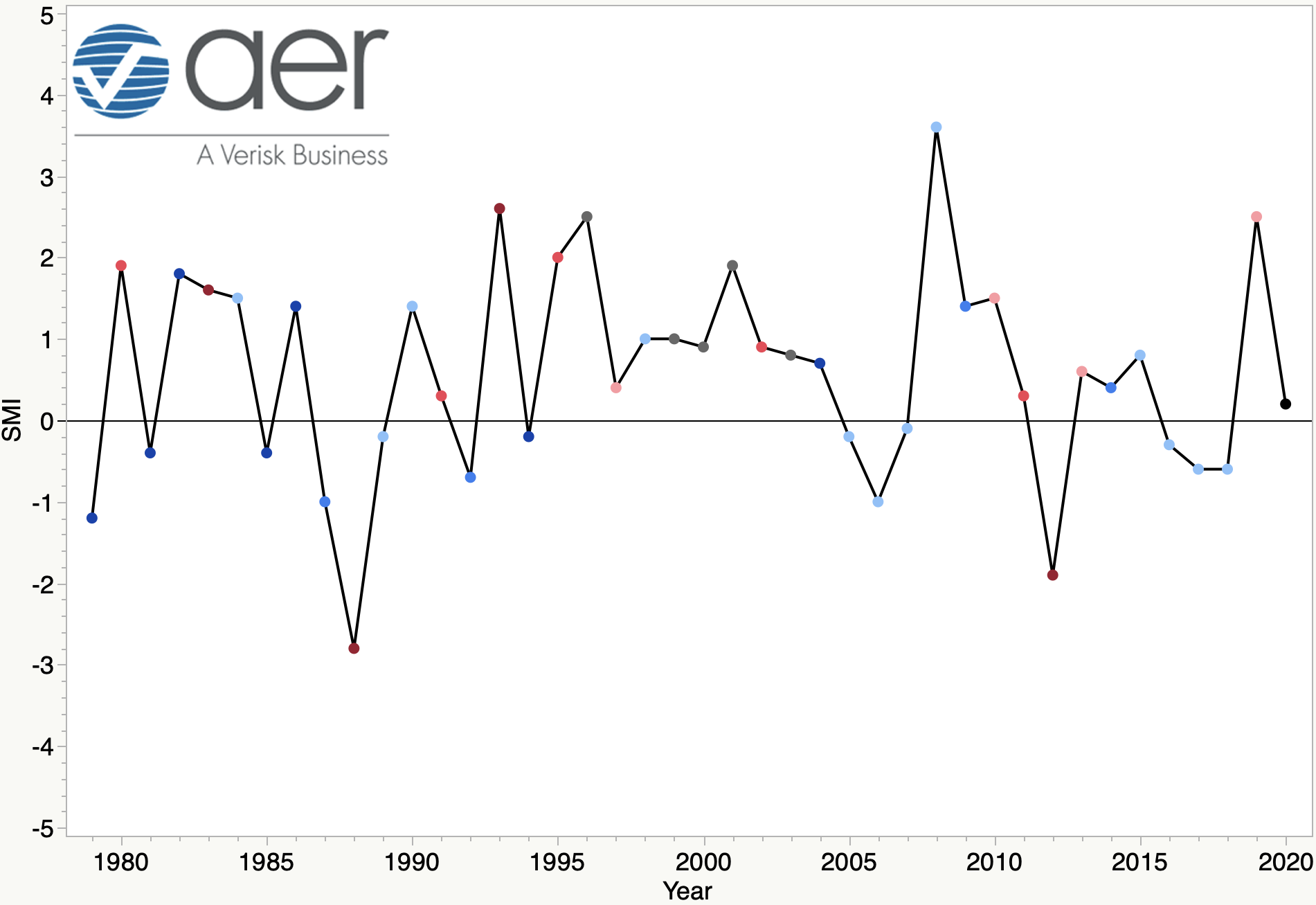 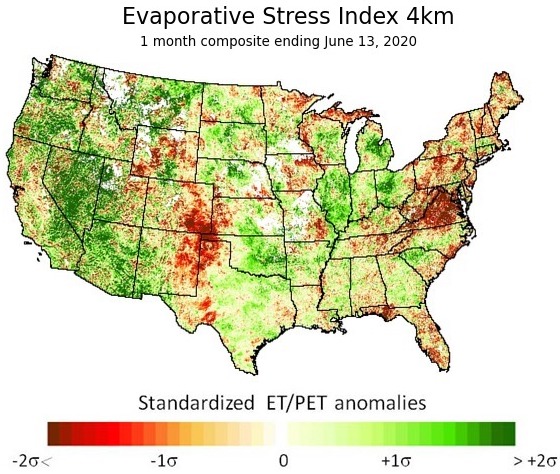 According to the latest Crop Progress Report, planting of the U.S. corn crop is essentially complete and soybean isn’t far behind at 93 percent. U.S. corn is currently rated at 71 percent Excellent/Good (E/G) against 5 percent Poor/Very Poor (P/VP). This is a slight decrease in the E/G category but no Corn Belt state has more than 10 percent of corn in P/VP. Soybean numbers are nearly identical at 72 and 4 percent respectively. The winter wheat crop is close to 90% headed with harvest rolling along in Texas and Oklahoma. Wheat condition is decent overall, 50 percent E/G vs. 19 percent P/VP, with a higher percentage of poor crop conditions in Colorado and Oklahoma, likely corresponding with the drought. Almost all of the spring wheat has emerged in the northern U.S. and over 80 percent of it is E/G. 93 percent of cotton has been planted across the U.S., with progress lagging a bit in Oklahoma.

A new feature starting this week is the Corn Yield Meter, which will be included every two weeks in the Ag Blog in between official forecasts, which will be in early July and again in early August. The conditions thus far and the AER seasonal forecast suggest a national yield of 184 bpa. Next update will be on 30 June 2020. 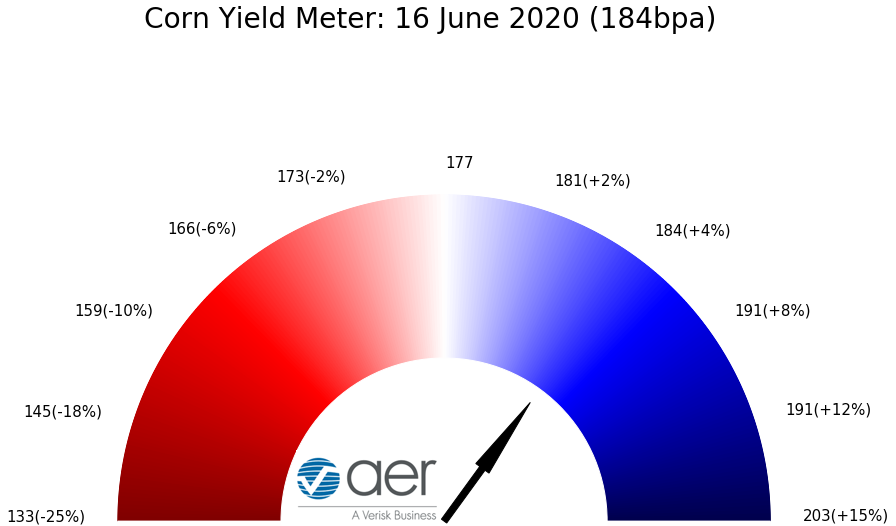