The previous “Ag Blog week” that ended last Thursday morning saw significant drying across much of the Great Plains and western Corn Belt region for a second consecutive week (Figures 1 and 2). Last week I mentioned that the Great Plains South region would have around 50 percent of the grid points at or below -3.0. I was a bit bullish on the developing flash drought with that projection but the drying certainly continued in that region, with the percentage of grid points with an SMI below -3.0 increasing to ~ 47 percent, a 13 percent increase from the previous week and close to a 40 percent increase since the end of May. Further north in the Great Plains, the drying trend continued with much of North Dakota, Nebraska, and eastern South Dakota having an SMI below 0.0, including close to 20 percent of the region below -3.0. This marks a pretty stark reversal from earlier in 2020 when there was more concern about flooding than drought across the region. Drying also accelerated with the warm, windy days across the western Corn Belt with a lot of red on the map across far eastern Nebraska, western Iowa, and western Minnesota.

The good news for the southern Plains and western Corn Belt is most places in those two regions have picked up beneficial rains and more seasonal temperatures, wind speeds since the Thursday morning cutoff for the maps (Figure 3). This does not mean those areas are out of the woods with drought, but for now things have improved. The rain was certainly welcomed in western Iowa and Nebraska (though a few places had too much of a good thing) and your correspondent is happy to report that crops in northern Lancaster County, Nebraska looked quite good yesterday. See Figure 8 at the end for a visual. Would welcome comments on how things look in your neck of the woods either through email or on Twitter.

Another area of recent concern has been New England, especially given the heat late last week, including consecutive days over 95F in Caribou, ME. There was a bit of improvement near the Canadian border but overall this area is quite dry and was listed in the abnormally dry category on the Drought Monitor last week (Fig. 4). Given the lack of rain over the past week (Fig. 5), warmer temperatures increasing demand for moisture and the Evaporative Stress Index indicating some possible vegetation stress (Fig. 6), it is feasible that much of New England will officially be in drought on the map released on Thursday. Regardless the area needs increased attention as drought is more uncommon in that area, which may mean a much higher than usual risk for forest and wildfires in New England.

Across the southeastern U.S., things were pretty soggy, especially across North Carolina, southern Virginia, and parts of West Virginia. A little further to the west the region is just slightly on the dry side with a median SMI of-0.7 but with less than 5 percent of the area under -3.0. Much of the Pacific Northwest is still in long-term drought but last week did bring some additional late season precipitation, leaving soils fairly moist in many places for later June. The Four Corners region remains quite dry (even for them) and there were some pretty impressive wildfires on the GOES-16 satellite over New Mexico and Arizona last week. 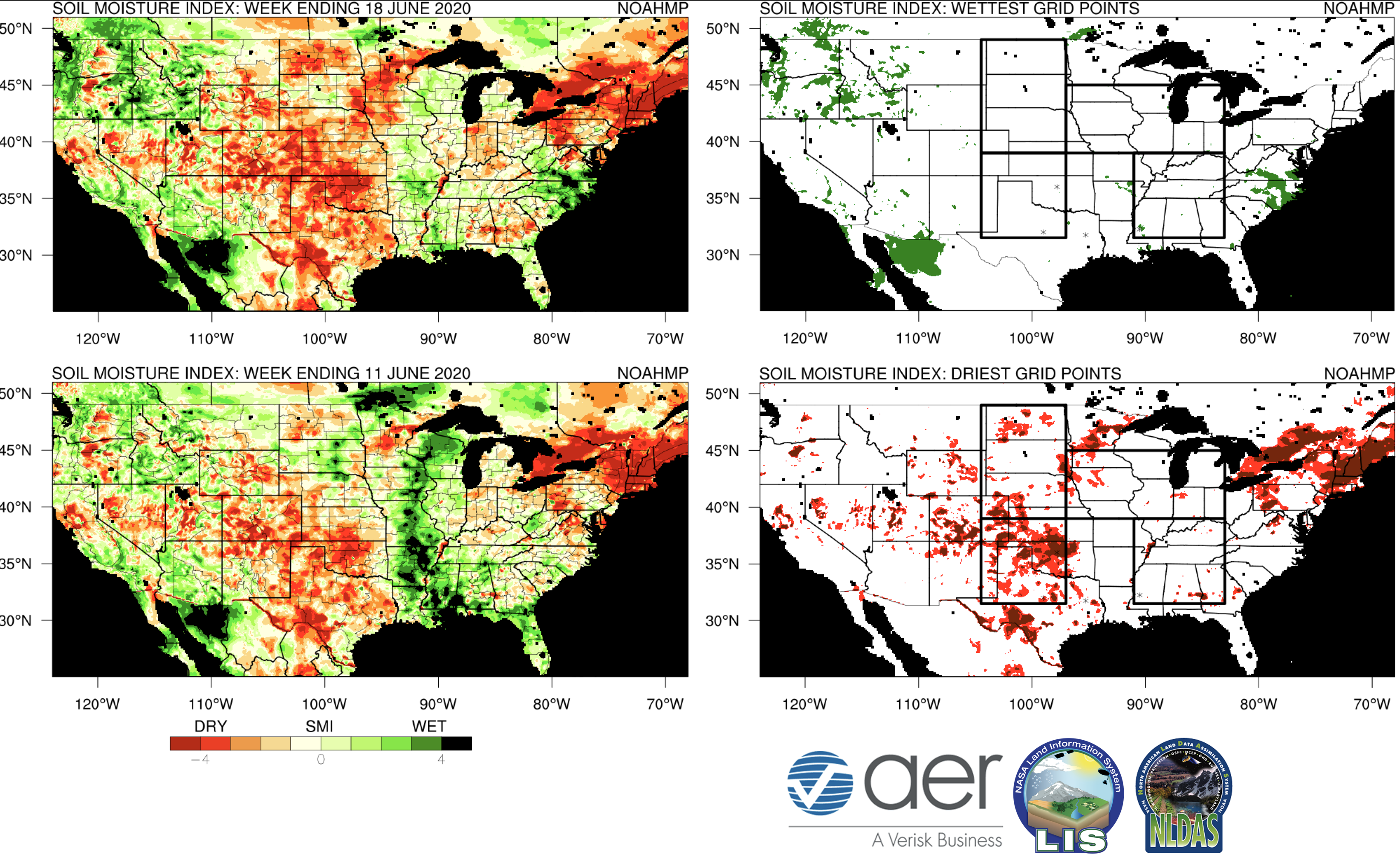 Figure 1. The Soil Moisture Index (SMI) for the 7-day period ending 18 June 2020 (top left) and 11 June 2020 (bottom left). On the right-hand side are the grid points where the SMI is at or above 3.0 (top right, red) and grid points where the SMI is at or below 3.0 (bottom right, red).  Results are based on output from the 0-1 m (surface to 3.23 feet) layers in the Noah-Multiparameterization (Noah-MP) land surface model. Noah-MP is run in the NASA Land Information System (LIS) framework with the North American Land Data Assimilation Version 2 (NLDAS-2) forcing dataset. The SMI calculation is based on the soil moisture index created in Hunt et al. (2009) such that ‘5’(dark green) is the wettest and ‘-5’ (dark red) the driest for the period of record.  The period of record used calculate the SMI for the current map is 1979-present. 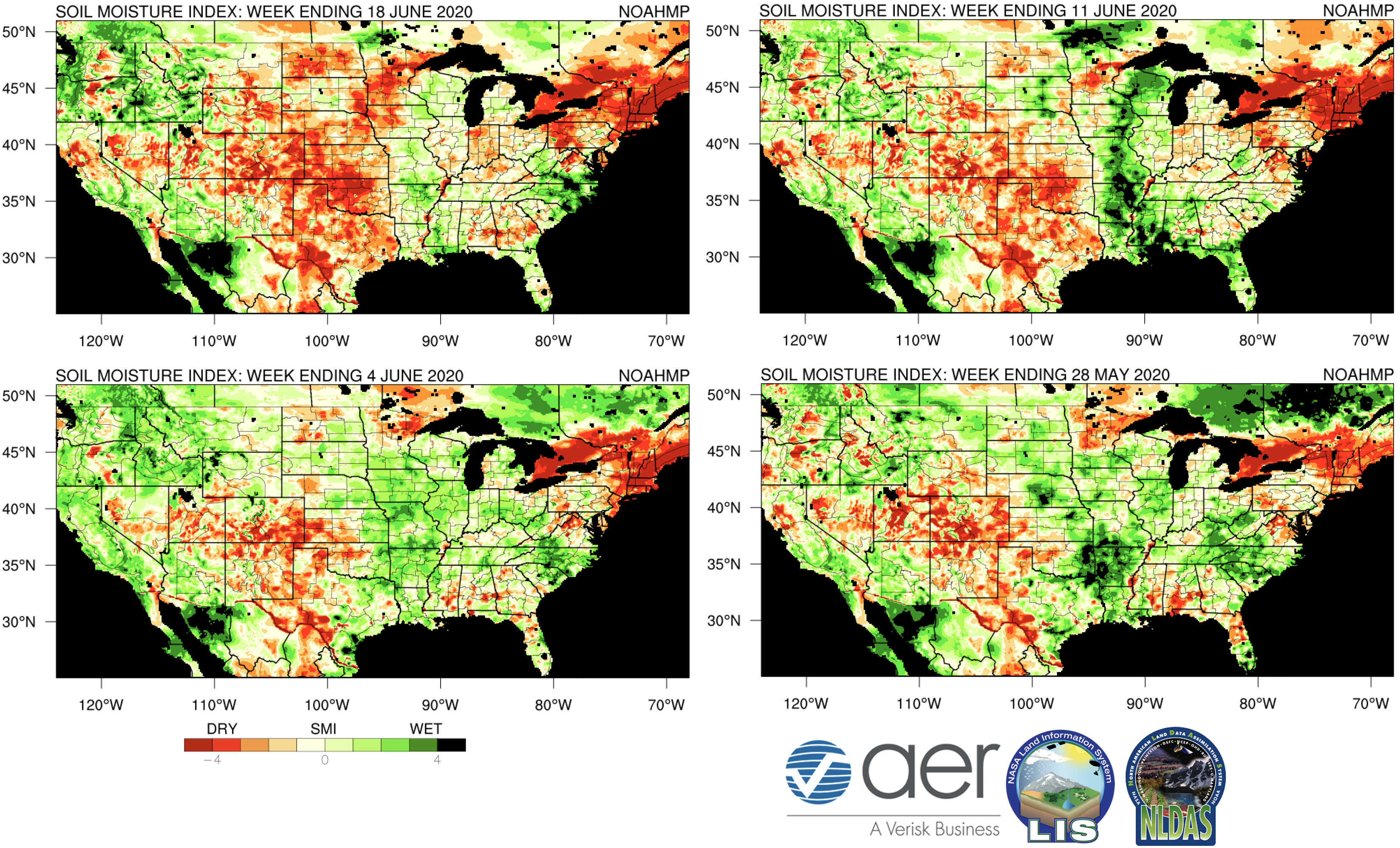 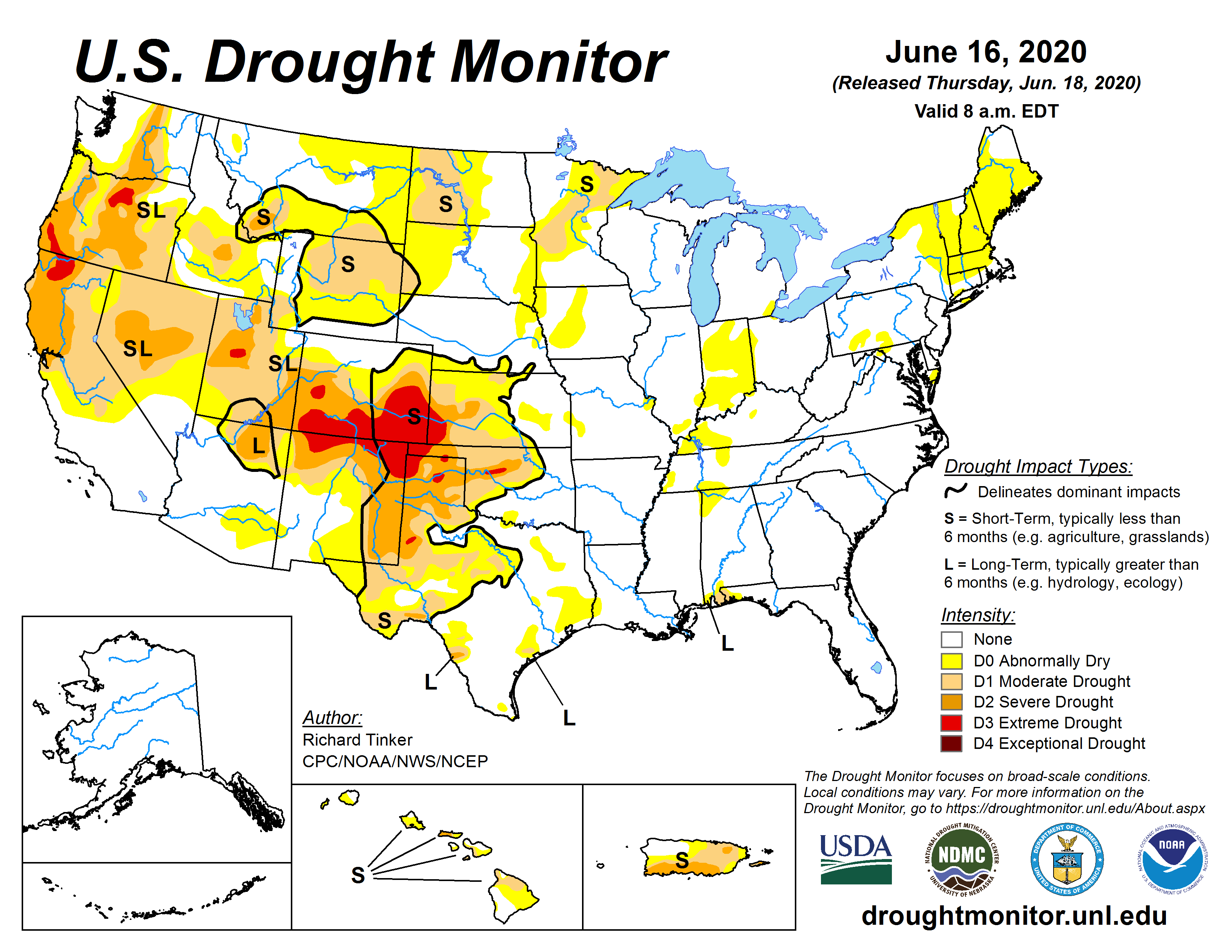 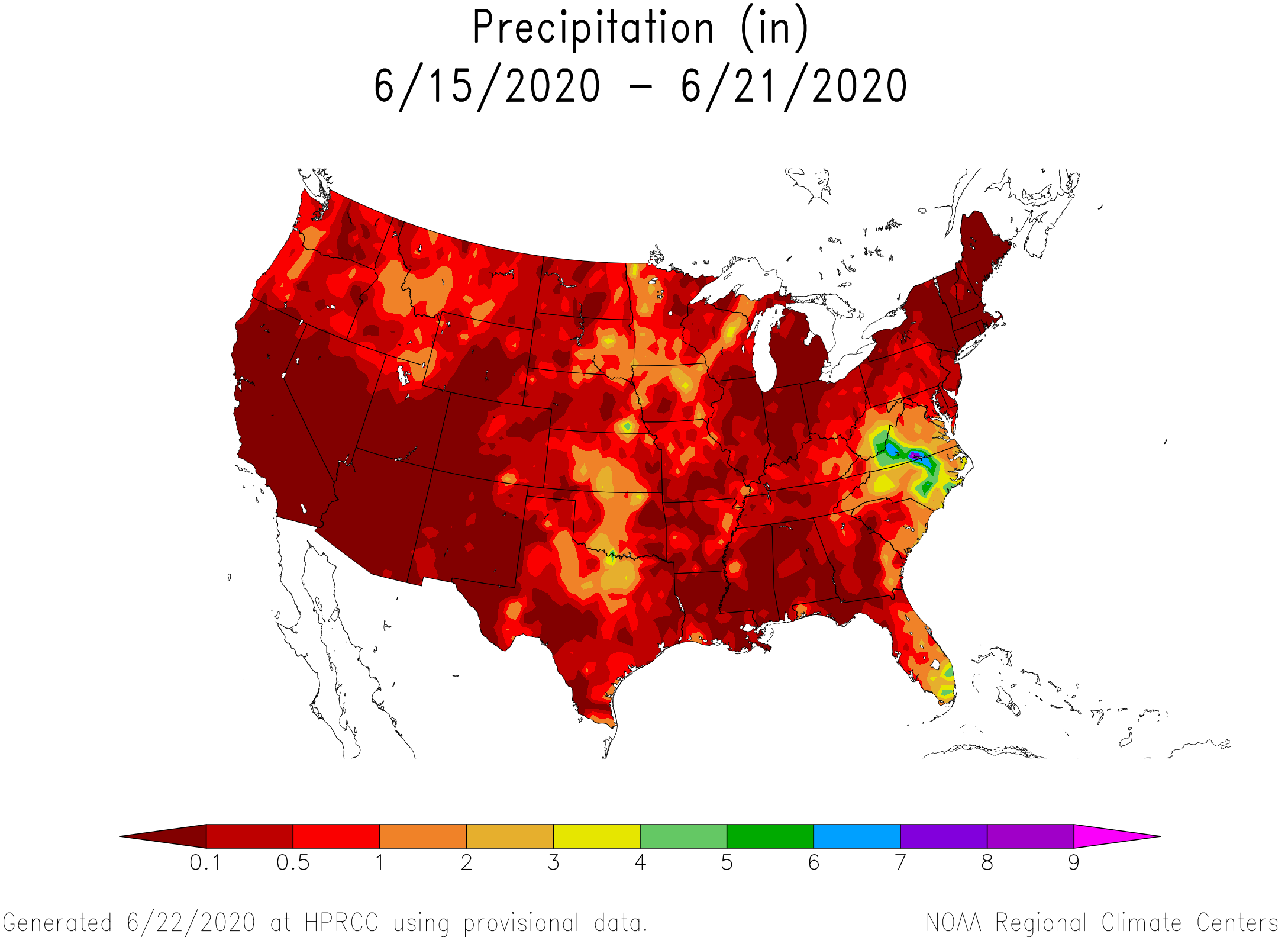 Figure 5. Total precipitation over the past seven days (through Sunday 21 June).  Map courtesy of the High Plains Regional Climate Center. 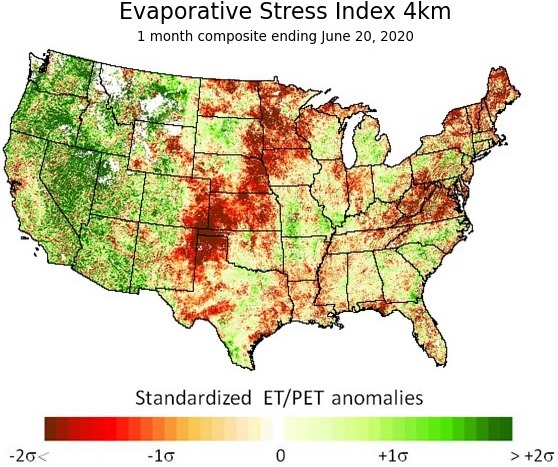 According to the latest Crop Progress Report, planting of the U.S. soybean is virtually complete. U.S. corn is currently rated at 72 percent Excellent/Good (E/G) against 5 percent Poor/Very Poor (P/VP), essentially the same as last week. Figure 7 shows that the median SMI of the Cron Belt is a little below 0 but within range of recent years (e.g., 2014, 2016-2018) that finished above trend. Soybean numbers are nearly identical at 70 and 5 percent respectively. The winter wheat crop is 96% headed with harvest rolling along in Arkansas, Oklahoma, and Texas. Wheat condition is decent overall, 52 percent E/G vs. 17 percent P/VP, with a higher percentage of poor crop conditions in Colorado. Around 12 percent of the spring wheat has headed in the northern U.S. and over 75 percent of it is E/G. The developing drought in North Dakota will need to be watched carefully though as that is some of the most productive area for spring wheat in the U.S. Cotton planting is virtually complete and is in fair condition, with higher P/VP numbers coming out of Missouri, South Carolina, and Texas. 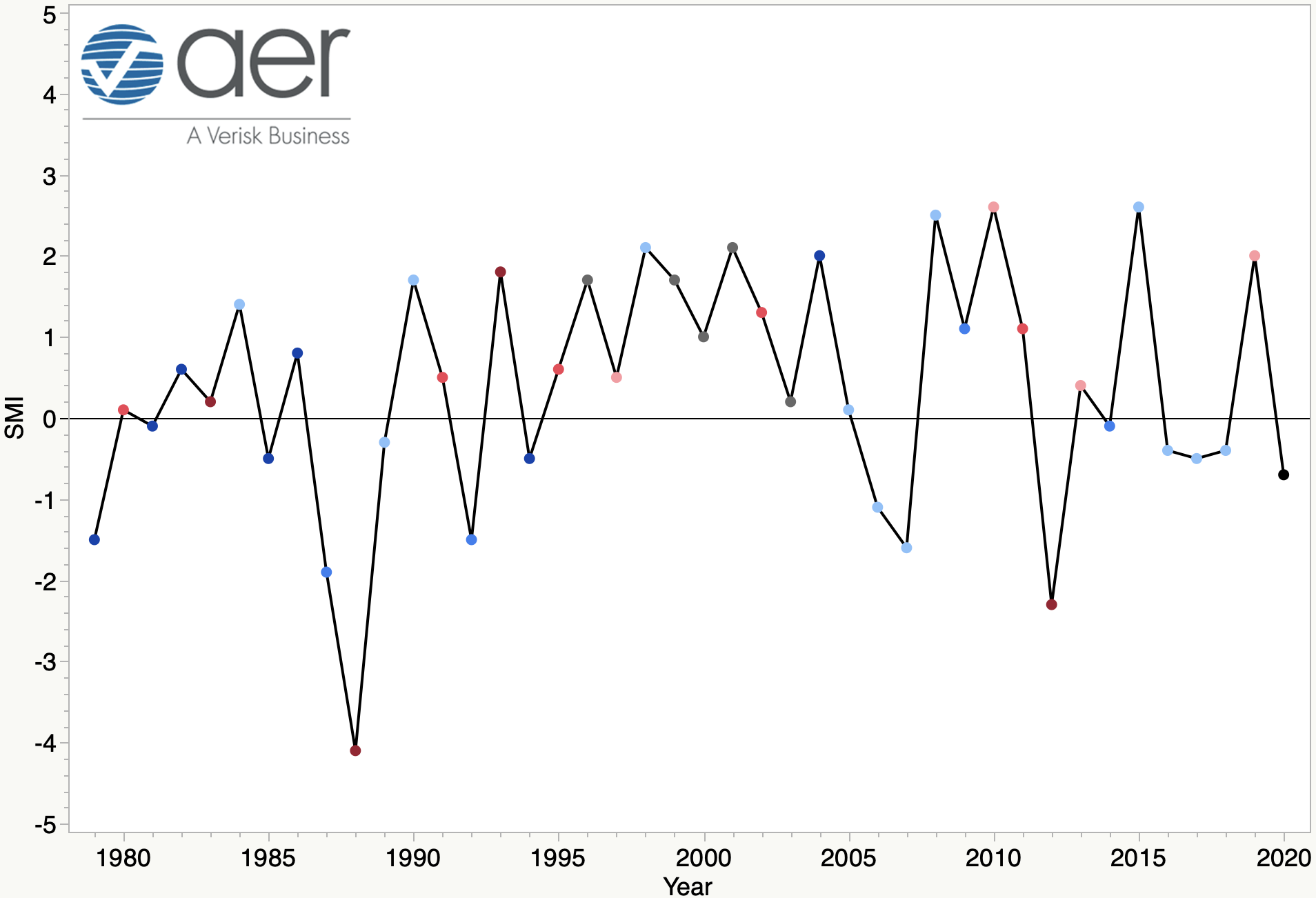 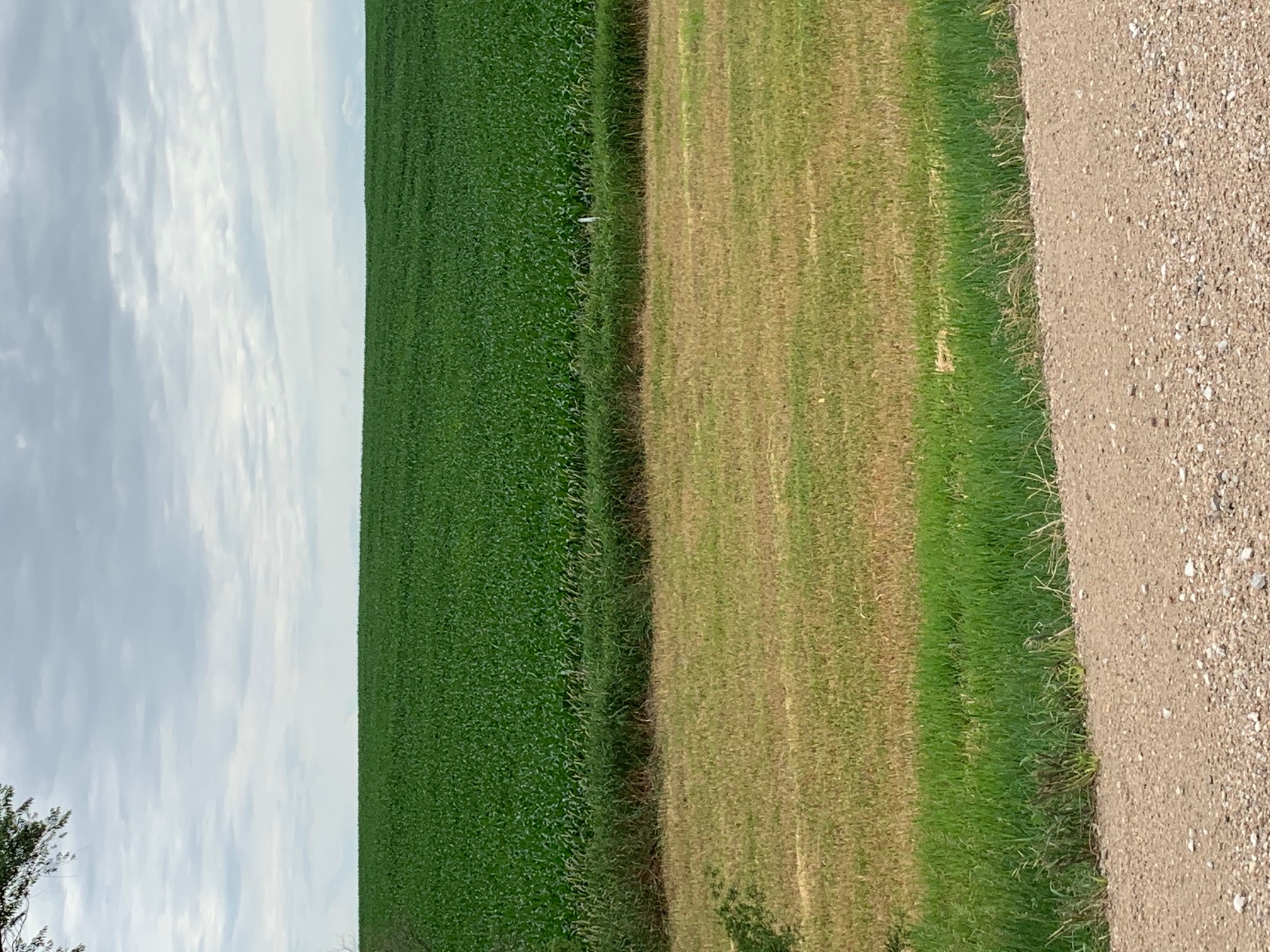