The recent pattern has favored improvement across much of the Great Plains, with pockets of strongly positive SMI values being found across Oklahoma, Kansas, and Nebraska, and some improvement in far eastern Colorado (Figures 1-3, Table 1). As shown in a recent map by Eric Snodgrass of Nutrien, the GFS model has been consistently underpredicting precipitation in this region and reinforces a question I posed in the Ag Blog from July 14th: How much influence has land-atmosphere coupling played a role in the development of convection over the past month in the Plains?

The flip side of the drought coin (see the U.S. Drought Monitor for the latest map) is western Iowa, which appears to have lost a bet with the devil on precipitation this summer (Fig. 4). Figures 1-3 show the dryness across of the top 1 m of soil and the recent lack of precipitation has no doubt caused some impacts. However, as your correspondent can attest after driving through some of the drought area late last week, the drought is obvious in the brown lawns but much less so in the crops. This casual visual observation is backed to a large degree by the ESI (Fig. 5) and QuickDRI (Fig. 7), which don’t show much in the way of stress affecting evapotranspiration. VegDRI (Fig. 6) is not good agreement but in most cases, it is not depicting more than moderate drought. The lack of moisture is undoubtedly going to be problematic for some fields if rain doesn’t come soon but I think yields in that area still have potential to be solid. My reason for optimism is that the drought is affecting an area with mostly deep, rich loess soils, which infers their soils are perhaps that area’s most important source of drought mitigation. Another reason for optimism is the lack of excessive heat this summer. While it has been warm just about everywhere compared to average, there has been a real lack of days exceeding 95F (35C) in most of the Corn Belt, even here in east central Nebraska. More thoughts on what that may mean for yield later.

The other area of concern in the Corn Belt besides western Iowa and parts of northeast Nebraska is Ohio; but again, the ESI and QuickDRI are much less bullish on significant stress than just looking at the SMI. What is going on in the Corn Belt is a poster child for why one should look at multiple drought indicators and not just one index. If I was evaluating conditions based solely on the 1-meter SMI, my outlook would be much grimmer for the Corn Belt. In science it is just as important (in my opinion) to acknowledge the limitations of a product as it is to highlight its successes. Speaking of the SMI maps, look for a new color scale in the Ag Blog next season that will be legible to all. The current maps, as much as I like them, are not particularly legible for those with Red-Green color blindness.

Elsewhere in the U.S., the SMI had dropped a fair amount across the Appalachian region, with a particularly large concentration of strongly negative SMI values across western Pennsylvania. Note that the latest SPoRT LIS run (from late Saturday evening) is less dry from West Virginia into Georgia. Vermont and parts of New Hampshire continue to show up as a hot spot for low soil moisture values and the ESI is mostly negative in this region, though not as bad as during the drought in 2016. As has been the case in recent weeks, there are few changes to report on in the western U.S. 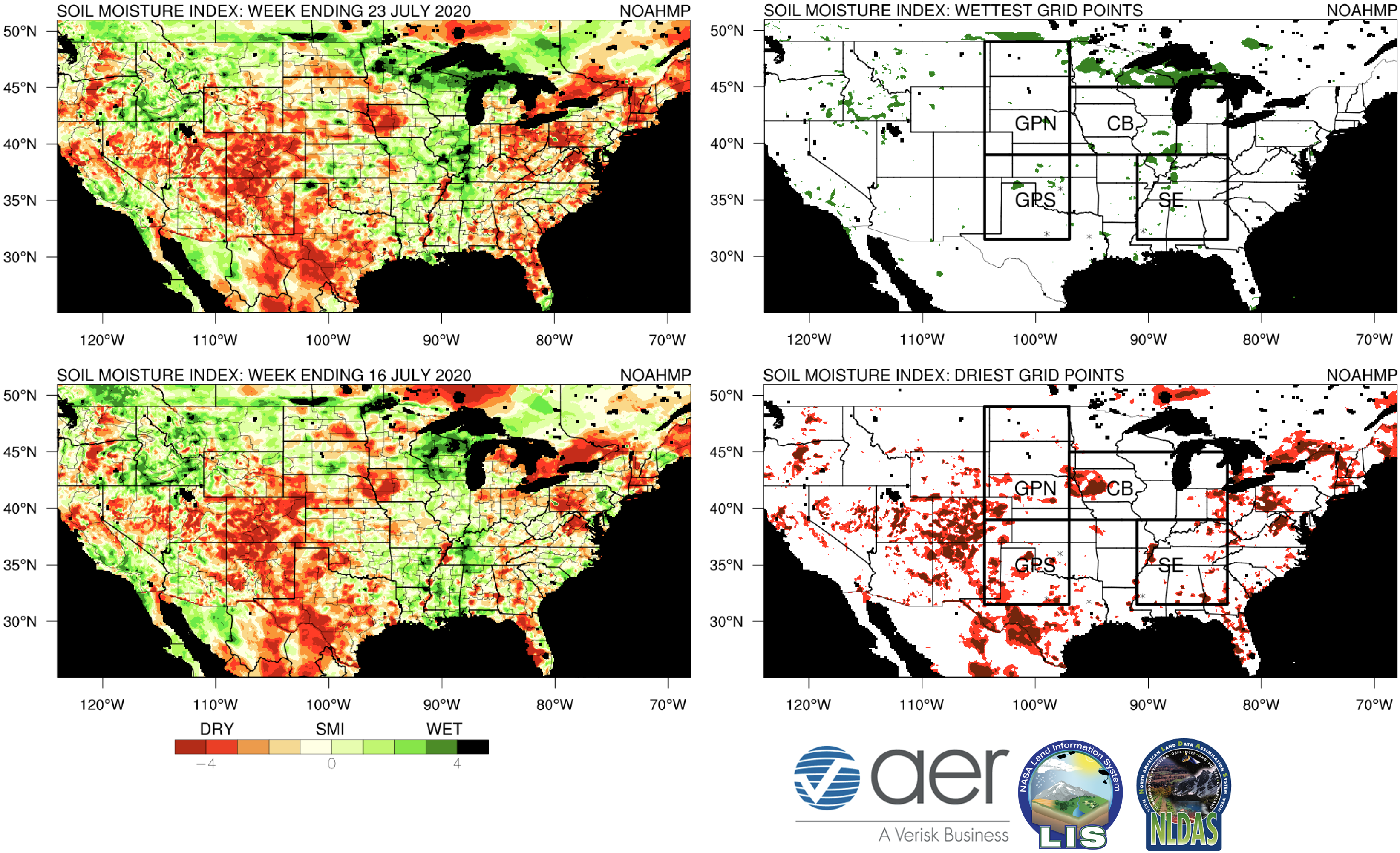 Figure 1. The Soil Moisture Index (SMI) for the 7-day period ending 23 July 2020 (top left) and 16 July 2020 (bottom left). On the right hand side are the grid points where the SMI is at or above 3.0 (top right, green) and grid points where the SMI is at or below 3.0 (bottom right, red).  Results are based on output from the 0-1 m (surface to 3.23 feet) layers in the Noah-Multiparameterization (Noah-MP) land surface model. Noah-MP is run in the NASA Land Information System (LIS) framework with the North American Land Data Assimilation Version 2 (NLDAS-2) forcing dataset. The SMI calculation is based on the soil moisture index created in Hunt et al. (2009) such that ‘5’(dark green) is the wettest and ‘-5’ (dark red) the driest for the period of record.  The period of record used calculate the SMI for the current map is 1979-present. 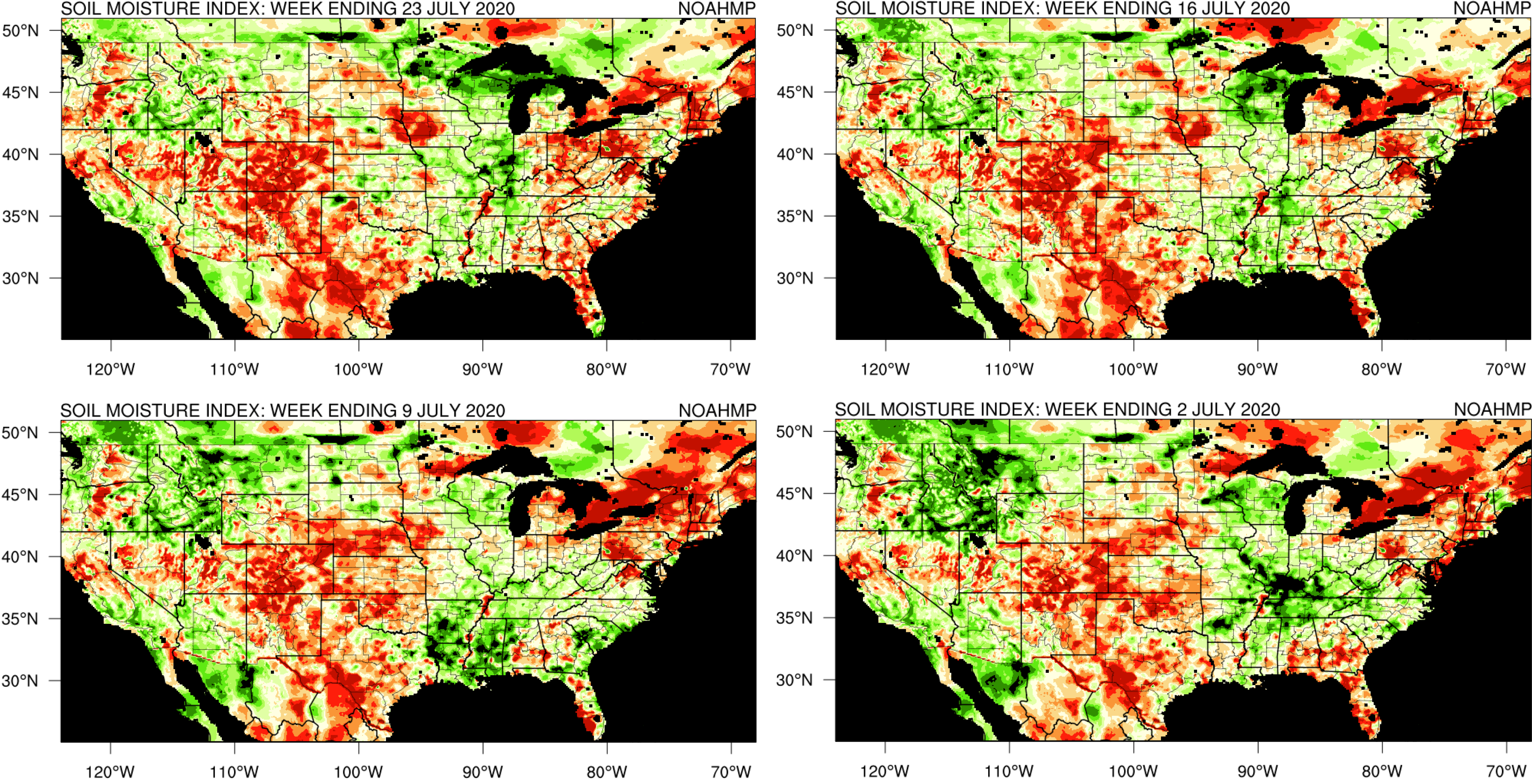 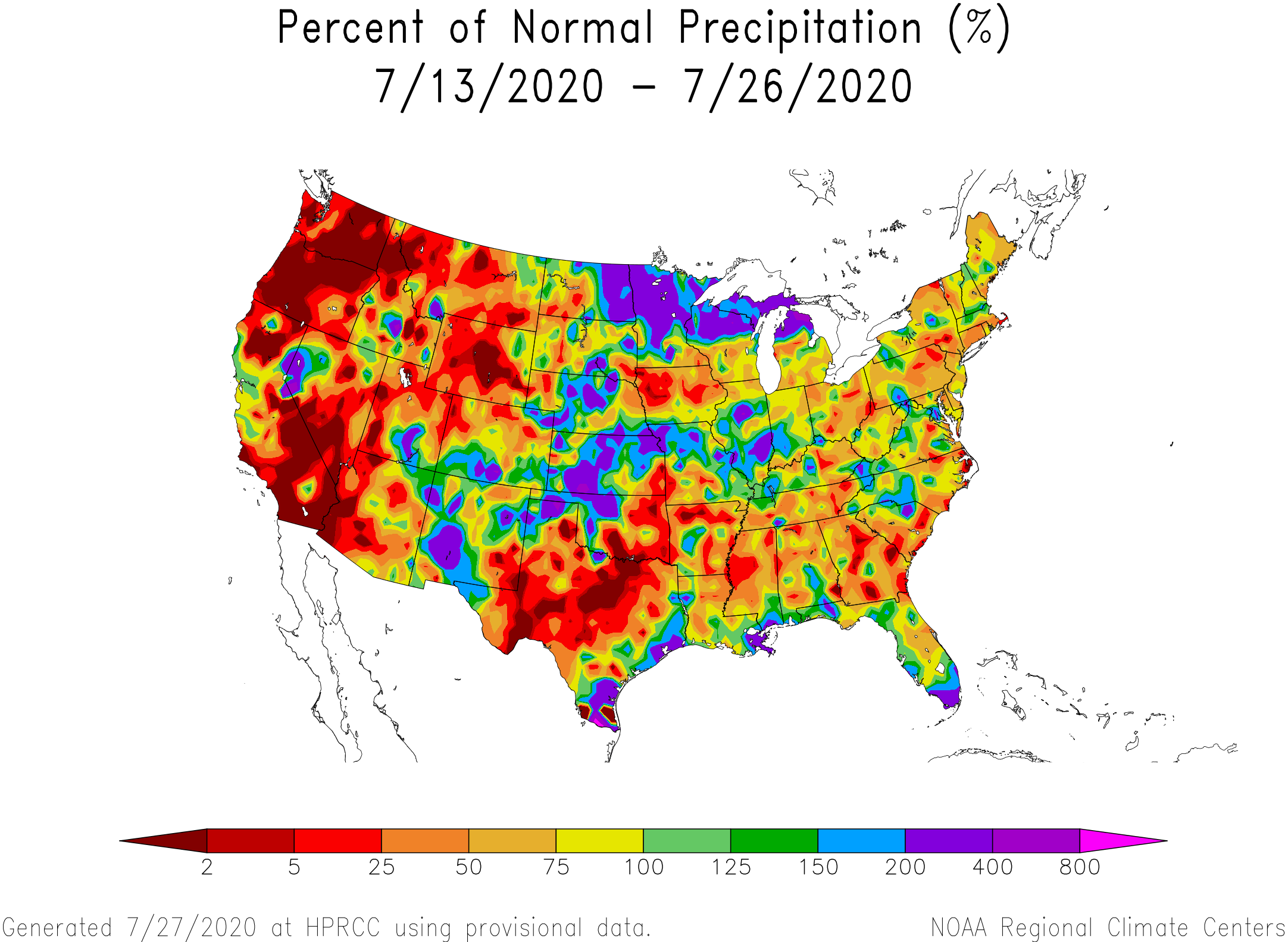 Figure 4. Percent of normal precipitation over the past 14 days (through Sunday 26 July).  Map courtesy of the High Plains Regional Climate Center. 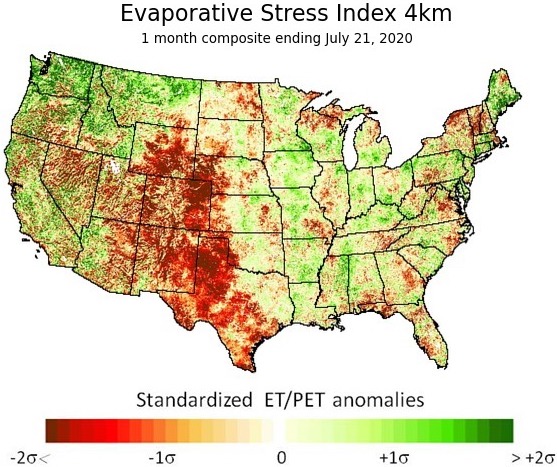 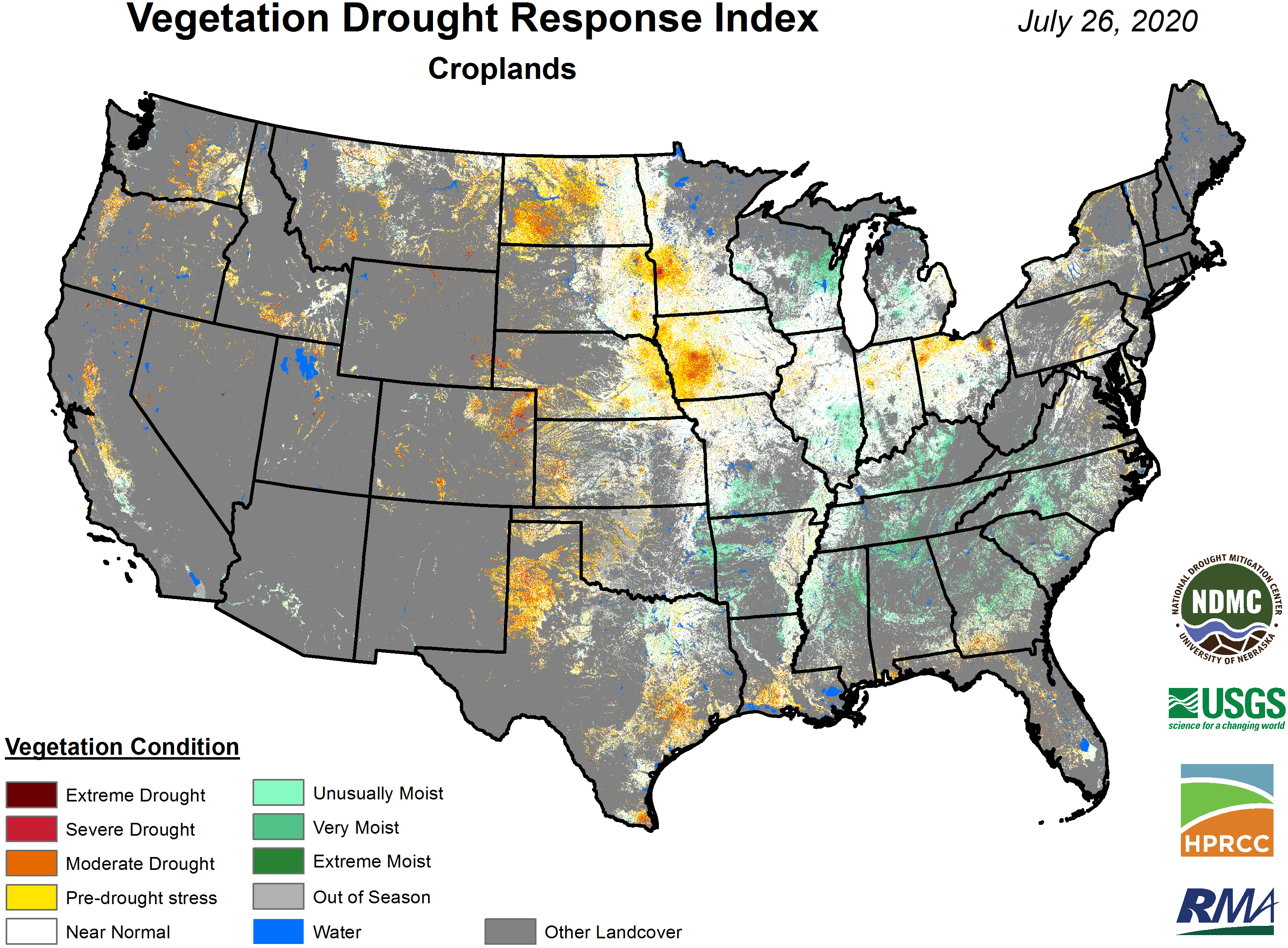 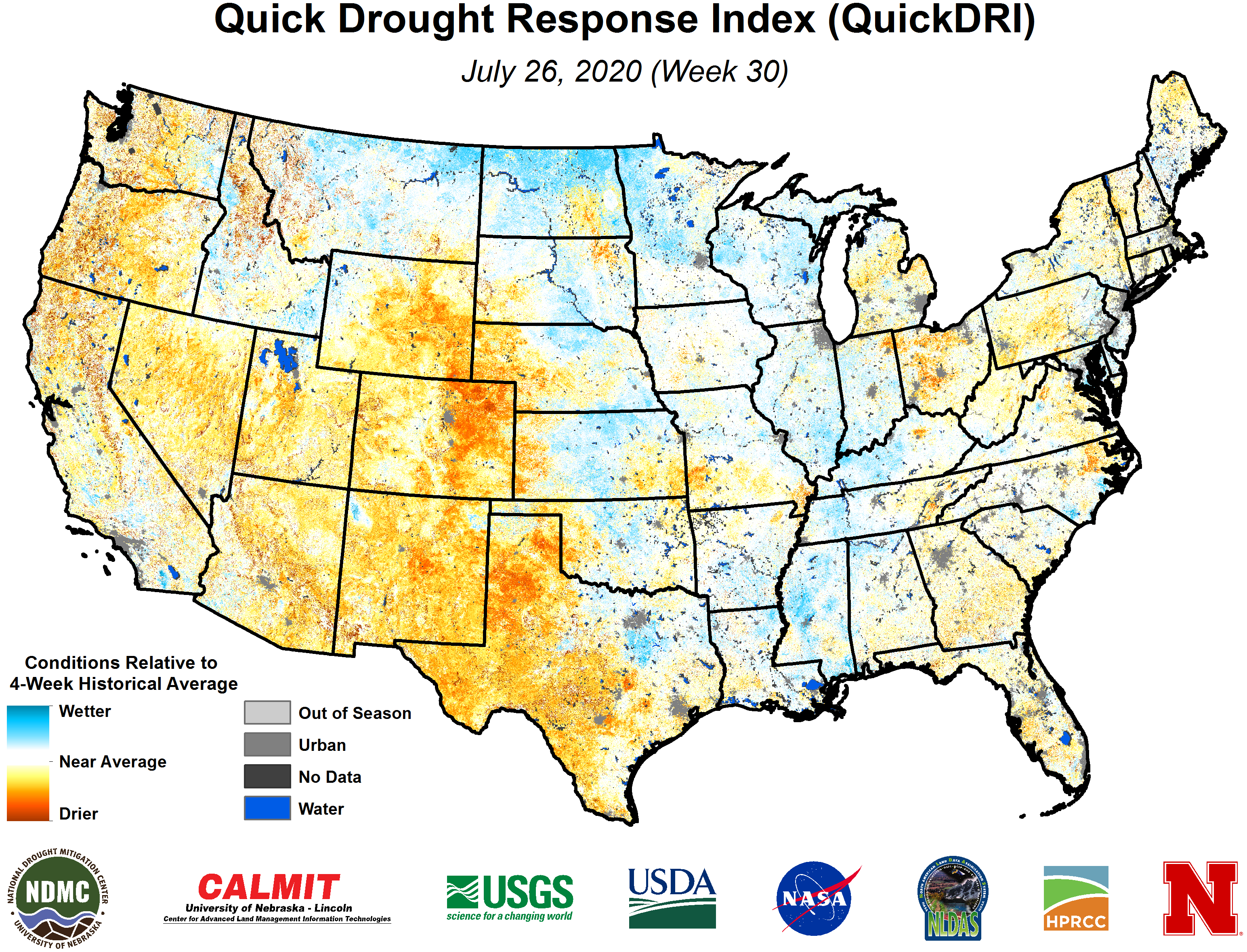 According to the latest Crop Progress Report, U.S. corn is currently rated at 72 percent Excellent/Good (E/G) against 7 percent Poor/Very Poor (P/VP), an improvement over recent weeks. Figure 8 shows that the median SMI of the Corn Belt is at 0.2 but continues to be in the same range as 2016-2018, all years with decently above trend corn. The percent of corn in the silking stage increased to 82 percent and almost a quarter of U.S. corn is in the dough stage. Soybean condition numbers also improved over last week, currently at 72 and 6 percent respectively. Over 90 percent of the spring wheat has headed in the northern U.S. and 70 percent of it is E/G, an improvement over last week. Cotton conditions continue to be mostly in good to fair condition, with improvement to near 50 percent E/G. Best cotton conditions are currently found in Alabama, Louisiana, and Oklahoma. 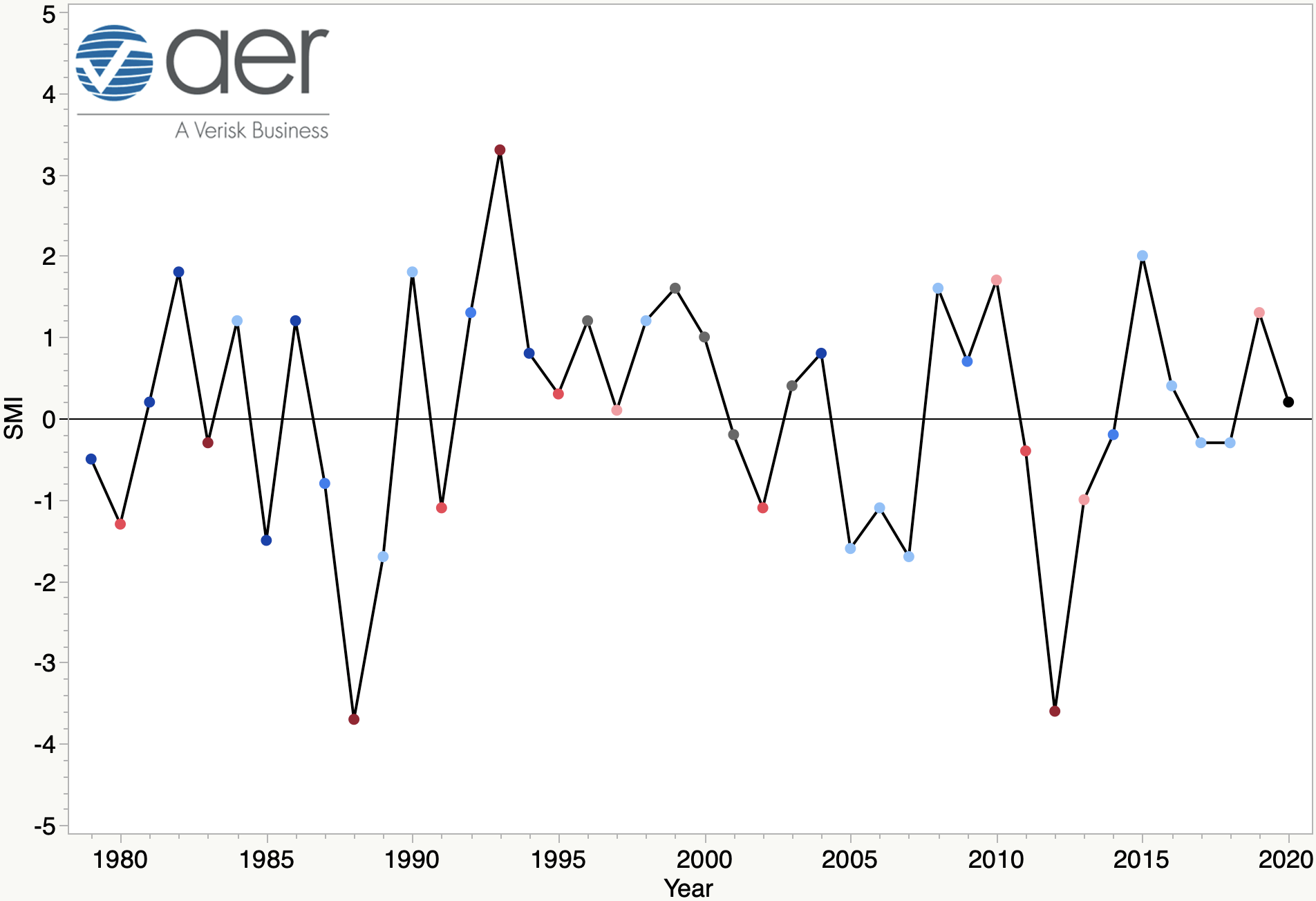 The current corn yield forecast is now at 188 bushels per acre (bpa), up 2 bpa from last week. While this forecast of 188 bpa is currently above the estimate of the market, it is my expectation that corn is almost assuredly going to be above trend and is likely to be 5 or more points above trend. Check next week for AER’s official forecast, which will include a district by district forecast in the Corn Belt. 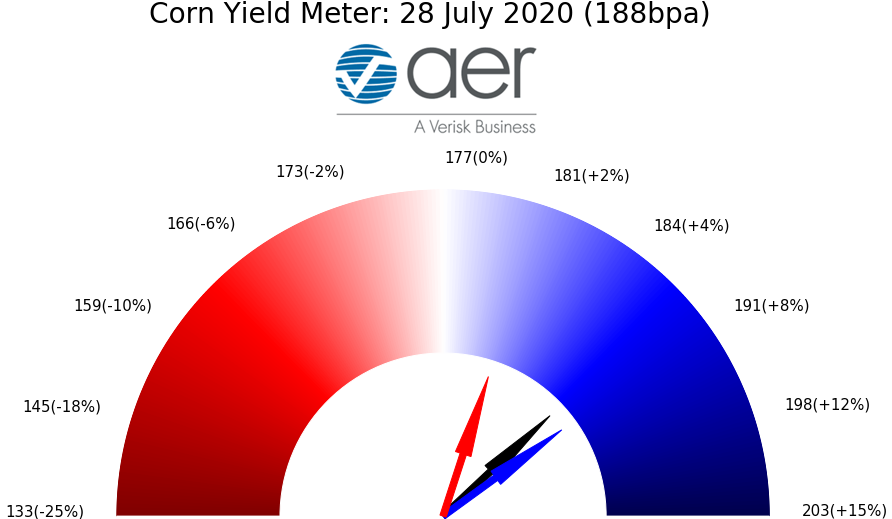