In recent decades, the Barents Sea has warmed more than twice as fast as the rest of the Arctic in winter, but the exact causes behind this amplified warming remain unclear. In this study, we quantify the wintertime Barents Sea warming (BSW, for near-surface air temperature) with an average linear trend of 1.74℃/decade and an interdecadal change around 2003 based on a surface energy budget analysis using the ERA5 reanalysis dataset from 1979 to 2019. The analysis suggests that interdecadal change in the wintertime near-surface air temperature is dominated by enhanced clear-sky downward longwave radiation (CDLW) associated with increased total column water vapor. Furthermore, it is found that a mode of atmospheric variability over the North Atlantic region known as the Barents Oscillation (BO) strongly contributed to the BSW with a stepwise jump in 2003. Since 2003, the BO turned strongly positive, characterized by anomalous high pressure over the North Atlantic south of the Barents Sea, which pumped heat and moisture along two branches of transport, one from southern Greenland along the  Norwegian Sea and one from the Eurasian continent to the Barents Sea. This enhanced the water vapor convergence over the Barents Sea resulted  in BSW through enhanced CDLW. Our results highlight the atmospheric circulation related to the BO as an emerging driver of the wintertime BSW. This study is a nice follow up of three recent review papers on the causes of amplified Arctic warming and its potential impact on mid-latitude weather by AER principal scientist Judah Cohen. 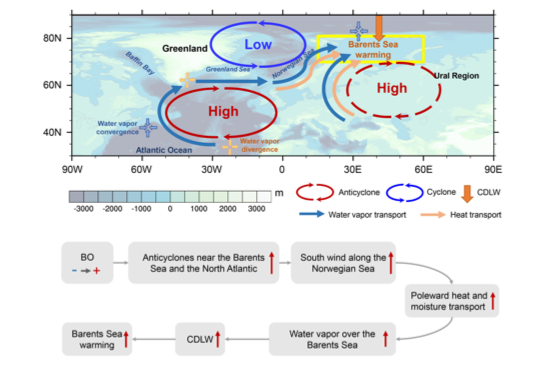 Figure. i  Schematic diagram of the influence of positive phase of the Barents Oscillation (BO) on the winter Barents Sea Warming (BSW). The anticyclone in the dotted line became significant during the past two decades, which facilitated the poleward heat and moisture transport along the Norwegian Sea. The increase in convergence of water vapor amplified the BSW through clear-sky downward longwave radiation (CDLW).