Southeast New England endured blizzard conditions as a powerful storm developed off of Cape Hatteras and moved northeastward Friday night and into Saturday 27-28 January 2022.  Known within media outlets as Winter Storm Kenan, snowfall amounts in Rhode Island and eastern Massachusetts were generally in the 12-24 inch range, with local amounts approaching 30 inches just northwest of the Cape Cod canal.  Winds gusts well over hurricane force were observed up and down the Massachusetts coastline.  Blizzard conditions – ¼ mile visibility and falling/blowing snow, with wind  gusts 35 kts or higher, and for at least 3 consecutive hours – were observed across the region.  Boston reported 7 hours 39 minutes of blizzard conditions, beginning at 8:15 AM and not ending until 3:54 PM Saturday.  Boston tied its one-day snowfall record of nearly 24 inches, with wind gusts at 53 kts.

Here are three color composite loops of the storm as observed by the geostationary GOES East weather satellite (Click to Loop).  Image frames are captured at 10-minute intervals starting late Thursday evening EST 28 January and continuing on through Sunday afternoon 30 January.  This sequence captures the evolution of a weak surface low just east of the Carolinas on Friday night into an explosive cyclogenesis that culminated in heavy snow and strong winds throughout southeast New England on Saturday. 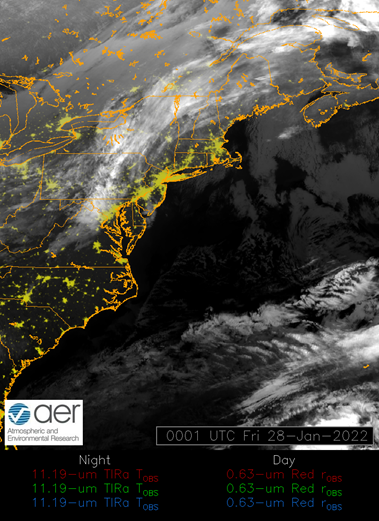 This is a composite image sequence that displays observed solar reflectances in the daytime and thermal infrared brightness temperatures at night.  In both cases, clouds appear white and cloud-free backgrounds are darker.  At night a city lights background rounds out the grayscale display, and in the daytime a composite vegetation background can be seen underneath the thinner cloud decks. 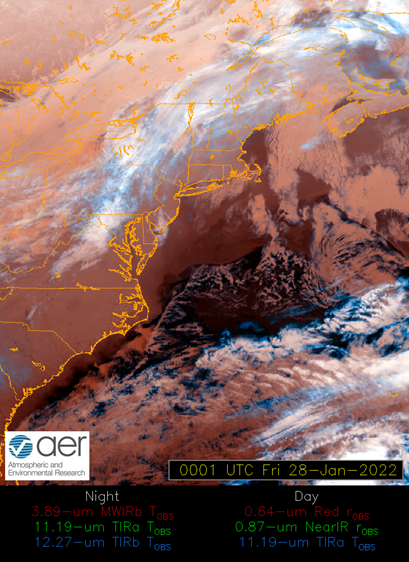 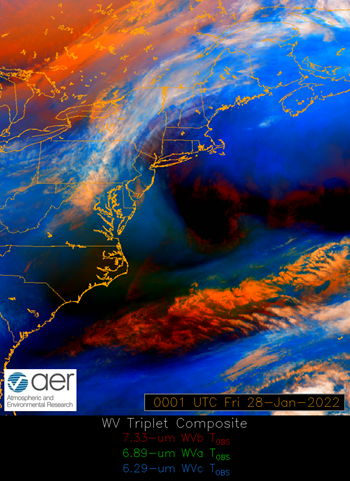 This composite image sequence is a combination of GOES sensor channels that are differentially sensitive to concentrations of water vapor at differing levels within the atmosphere.  Red tones denote relatively dry atmospheres where low clouds can often be seen.  Orange denotes moderately moist atmospheres, and blue indicates moist atmospheric columns.  Note the extensive dry slot that forms to the east of the circulation on Saturday, and watch as it spirals around the low center and into portions of western New England from the north on Sunday.