For those of you who have been reading this blog over the summer, you know that I think soil moisture is one of the most important variables for determining crop health and drought status. However, it is also important to monitor what is going on above ground to determine how “healthy” vegetation is compared to a certain period of year. That statement is particularly true for large agricultural regions, such as the U.S. Corn Belt and Great Plains regions, during a developing flash drought in the middle of the growing season.

One of my favorite tools for monitoring vegetation stress is the Evaporative Stress Index (ESI). The ESI represents anomalies in the ratio of actual evapotranspiration (ET) to potential evapotranspiration (PET), which are generated with the thermal remote sensing based Atmosphere-Land Exchange Inverse (ALEXI) surface energy balance model. To put it more simply, the ESI estimates positive or negative anomalies in ET/PET based on the anomalies in land surface temperature for the time of year. If most of the atmospheric demand (i.e., PET) for soil moisture is being met by ET, which implies moist conditions and healthy vegetation, then land surface temperatures will be lower and ET/PET anomalies will be positive. Conversely, in times of vegetation stress, very little of the atmospheric demand for moisture is met by ET, which means the land surface temperature will be higher and ET/PET anomalies will be negative. For additional information on the technical details of the ESI, I suggest the following papers: Anderson et al. (2012) and Otkin et al. (2013).

Currently, the ESI depicts abnormally moist conditions and by extension, non-stressed vegetation, over the eastern half of the country with drier conditions over most of the west (Fig. 1). Recent rainfall over the Corn Belt was picked up by the ESI, as positive values are more dominant than they were earlier in the month. 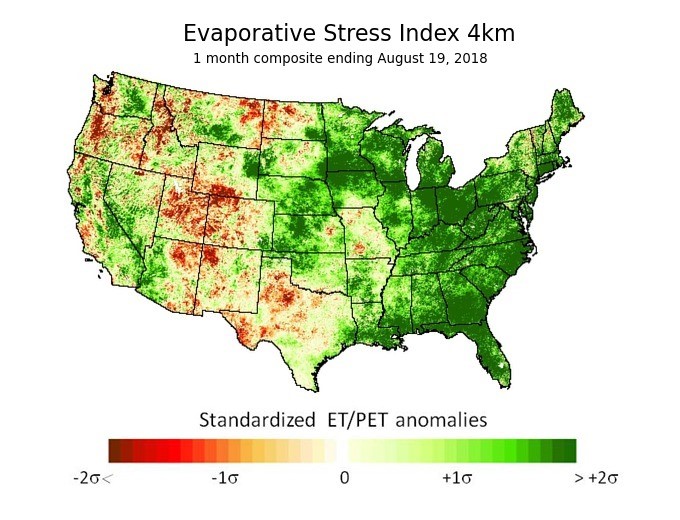 While drought conditions are not a problem this season over most of the Corn Belt, this was certainly not the case at this time in 2012, when most of the region was significantly affected by a drought that rapidly developed earlier that summer. The ESI map from August 18, 2012 (Fig. 2) shows this stress over the central U.S., with the most extreme conditions in Illinois and Missouri. 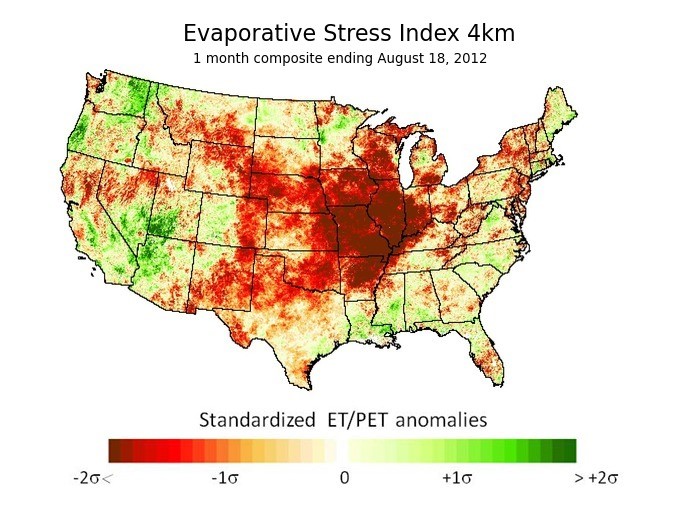 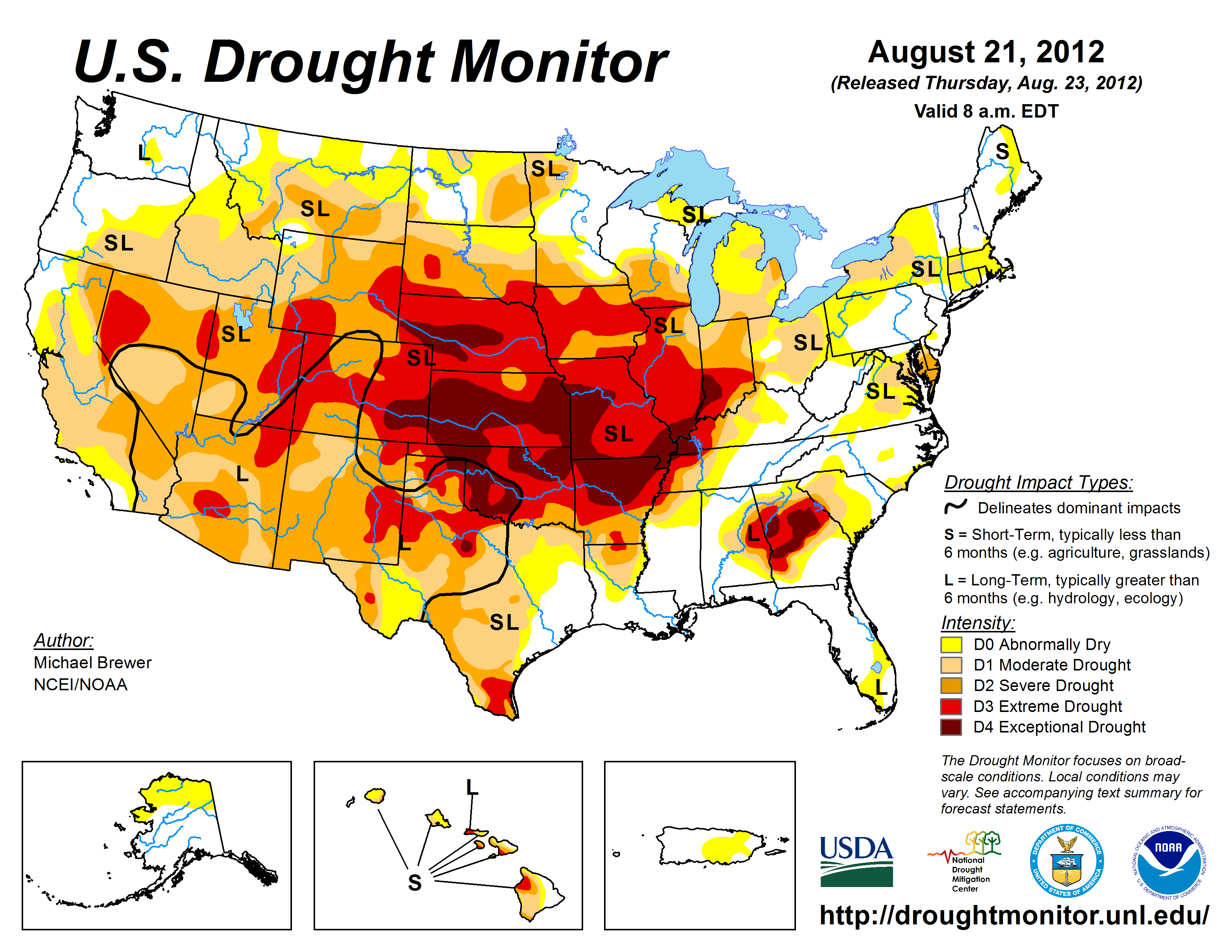 The ESI map was in good agreement with the U.S. Drought Monitor (USDM) map from later that week (Fig. 3), which shows the extreme to exceptional conditions over most of the central U.S. and Corn Belt.

Perhaps even more importantly, the ESI did an excellent job at showing the impact to final corn yields in 2012. Figure 4 shows that most of the crop reporting districts in the Corn Belt were not only below trend in 2012, many of them were significantly (in excess of 10 points below trend) or historically (in excess of 30 points below trend) so. Those aforementioned areas nicely overlap the area in extreme stress on the ESI map in Fig. 2. The delineation between the areas with the historically and significantly below trend values to below trend to above trend yields was also excellent. For example, the stress depicted by the ESI in southern Minnesota was less severe than further south in Iowa, Illinois, and Nebraska. This area ended up being below trend but nowhere near the extent as further south. Going further north in Minnesota, the ESI depicted positive anomalies of ET/PET and those districts ended up being above trend in 2012. 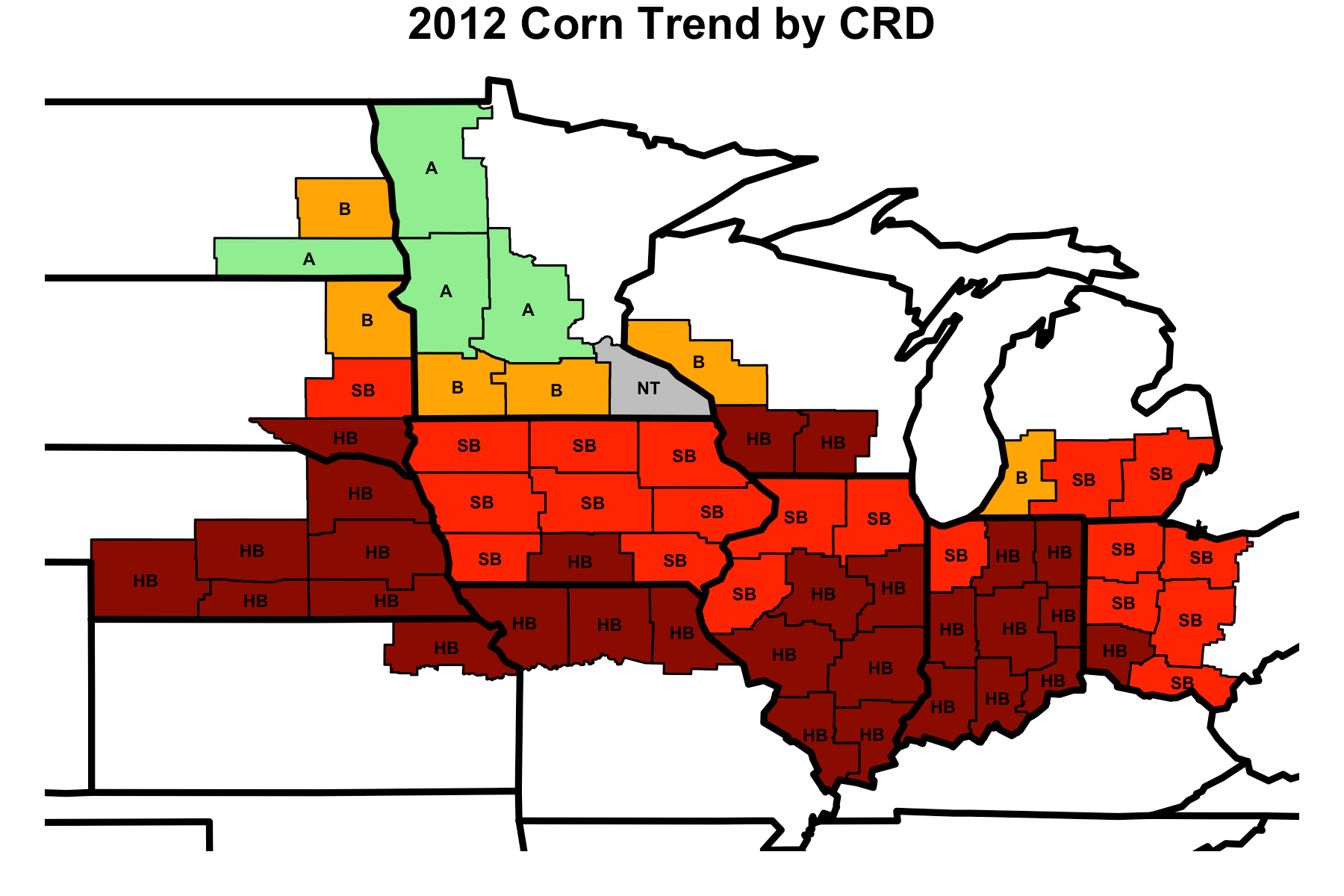 Figure 4. Corn yield trend by crop reporting districts in the U.S. Corn Belt in 2012. Legend is as follows:

A: Above trend, light green, 1-5 points above the trend line

NT: Near trend, gray, within 1 point of the trend line

B: Below trend, orange, 1-10 points below the trend line

SB: Significantly Below trend, red, 10-30 points below the trend line

HB: Historically Below trend, dark red, more than 30 points below the trend line

Further research would need to be conducted to determine if the ESI is routinely a good predictor of corn yields. My sense is that, at a minimum, the ESI will be a useful tool for us in the future in helping to determine those areas that are likely to be below trend in our August corn forecast. Therefore, I recommend checking the weekly updated ESI maps during the critical period after corn pollination, as it may well be a good indicator of how things are going to ultimately come out.