In a novel application of space-based atmospheric measurements, Atmospheric and Environmental Research (AER) of Lexington, Massachusetts, in collaboration with GeoOptics of Pasadena, CA, is investigating the use of radio occultation (RO) measurements to improve severe weather forecasting.  Pairing state-of-the-art, high-fidelity weather models with the rapidly evolving technology of miniaturized satellites in a scientific investigation is unique and new.  So, the results of AER's study are not only intriguing from a science/discovery point of view, but compelling also, with the very distinct possibility of becoming a reality in the next few years.

The challenges of severe weather forecasting

Detailed severe weather forecasting continues to be a vexing problem for meteorologists.  There are simply not enough measurements of atmospheric temperature, moisture and pressure to start up, or initialize, today's detailed weather models accurately.  The start-up problem for such models is "underdetermined", in mathematical terms.

Radio occultation is a well-established technique today for measuring planetary atmospheres, first used in the 1960's to probe the atmosphere of Venus from Earth.  The technique involves two orbiting satellites exchanging radio signals along a straight line that passes through the edge, or limb, of Earth's atmosphere.  The signals that pass from one to the other are called "signals of opportunity", because they already exist as part of the Global Navigation Satellite System (GNSS).  As the two satellites move with respect to each other, the straight line between them either cuts down further into the atmosphere (known as a "setting occultation") or moves from Earth's surface up and out of the top of the atmosphere (known as a "rising occultation").  The Earth occludes or blocks the two satellites from seeing one another at the beginning or end of an observing sequence, so these measurements are referred to as "occultations". Subtle changes are induced in the radio signals passed between the two satellites by that portion of the atmosphere through which the signals pass. Those signal changes contain markers for atmospheric temperature and water vapor.  In the last decade, a partnership between US and Taiwan space agencies has flown a 6-satellite constellation to measure Earth's atmosphere using radio occultations, the COSMIC/FORMOSAT-6 mission.  Measurements made by the COSMIC mission have proven to be invaluable to meteorologists world-wide.  The six orbiting COSMIC satellites currently gather about 1,400 vertical occultation profiles every day globally.  The COSMIC follow-on constellation of radio occultation satellites, COSMIC-2, when fully deployed (12 satellites) will produce 8,000 - 10,000 global profiles/day.

Over the next few years, GeoOptics expects to launch a constellation of miniature radio occultation satellites that will yield about 50,000 vertical occultation profiles every day globally, the front end of their CICERO constellation.  This significant increase over COSMIC and COSMIC-2 observation yields should produce measurable improvements in global weather forecast models, but perhaps only very modest improvements in small-scale regional weather models where the sampling requirements in space and time are much more stringent.

In AER's study, we are considering the potential impact of constellations of radio occultation satellites on weather forecasting that are very much larger than COSMIC, COSMIC-2 or the initial CICERO deployment, comprised of hundreds to a thousand orbiting/measuring units instead of six, twelve or twenty-four.  The CICERO constellations AER is investigating can yield up to 2.5 million vertical occultation profiles every day globally.  For comparison purposes, the COSMIC mission gathers about 1 vertical radio occultation profile over the state of Oklahoma every other day. A future constellation that yields 2.5 million vertical profiles globally means 35-50 vertical profiles over the state of Oklahoma every hour.

In our OSSE, we chose a severe weather case in Oklahoma that produced an EF3 tornado and flash flooding in the Oklahoma City metro area, late in the afternoon and early evening of May 31, 2013.

Figures 1-3 show snapshots of a key ingredient for severe weather, water vapor in the lower part of the troposphere, from different treatments in our OSSE.  All are valid at the same time, about 12 noon local time, May 31, 2013 (i.e., 4-5 hours before severe weather impacted Oklahoma City), and at the same level in the atmosphere, about 4,000 feet above ground level.  Figure 1 shows water vapor from the Nature Run (high-fidelity; our OSSE's "truth").  Figures 2 & 3 compare the effects of using conventional weather observations versus conventional weather observations plus CICERO radio occultation profiles.  The data fusion experiment that includes the CICERO observations (Fig. 3) produces a water vapor analysis that is very much closer to the Nature Run snapshot (Fig. 1) than the data fusion experiment that uses only conventional weather observations (Fig. 2).  These results show that CICERO data has significant potential to produce more accurate analyses in severe weather environments, and therefore, better characterize the environment for severe weather convective initiation.  More accurate 3D analyses of temperature, water vapor and pressure in the lower troposphere is critical to improved severe weather forecasts.  But the proof awaits in the forecasts started from these analyses.

Our severe weather OSSE study will continue to measure the effects of CICERO data on subsequent severe weather forecasts.  We are using updraft helicity (UH) and accumulated precipitation to verify the forecasts against the Nature Run.  Also, by examining the effects over a range of constellation sizes, 15,000 - 2,500,000 global profiles/day, we can perhaps find an inflection point in the impact of these data.  That is, is there a point at which the cost of adding more orbiting satellites does not produce a correspondingly valuable improvement in severe weather forecasts? 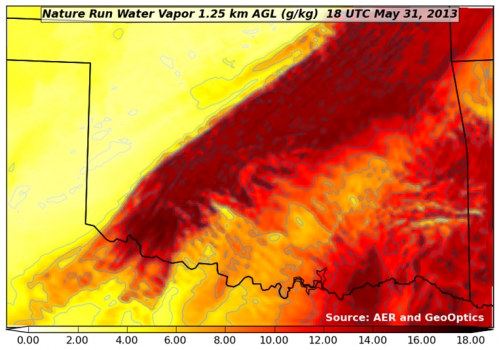 Figure 1. "Nature Run" atmospheric water vapor at about 4,000 feet above the ground.  The yellow-to-red color scale (bottom of figure) indicates how much water vapor is present, i.e., yellow is dry and red is moist.  This realization of atmosphere moisture during an Oklahoma severe weather outbreak in May 2013 is the yardstick against which our assimilation experiments are compared for realism.  It has a horizontal resolving power of about 1 1/4 mile (i.e., 2 km). 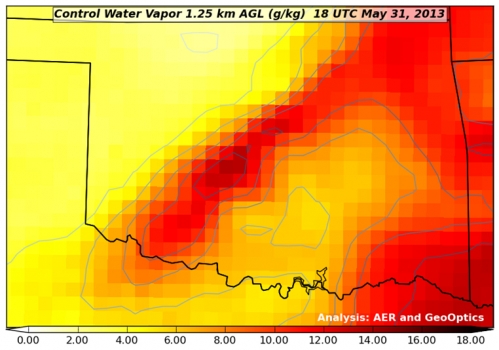 Figure 2. Atmospheric water vapor analysis using conventional observing system.  Valid time, vertical level and color scale are the same as in Figure 1.  Note that the data fusion experiments use a bigger grid than the Nature Run (Figure 1) with a horizontal resolving power of about 11 miles (i.e., 18 km). 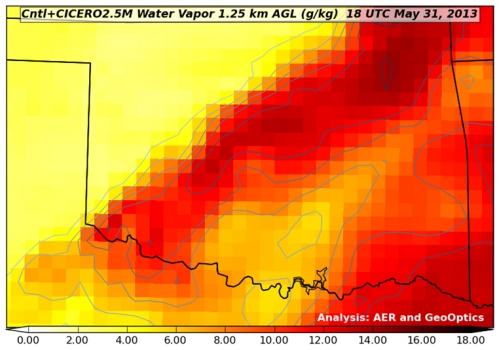 Figure 3. Atmospheric water vapor analysis using conventional observing system + CICERO radio occultation observations.  The distribution of water vapor in this analysis is much closer to the Nature Run (Fig. 1) in pattern and magnitude than the Control result (Fig. 2).